By Maureen Sundberg on May 18, 2016 in Native Plants, Permaculture

Permaculture is on the rise. Like small-scale, local farming in general, permaculture is fueled by increasing reports of damage caused by industrial-scale agriculture – pollution of land and water, neurotoxic pesticides, inhumane treatment of domestic animals, and sweeping destruction of habitat. 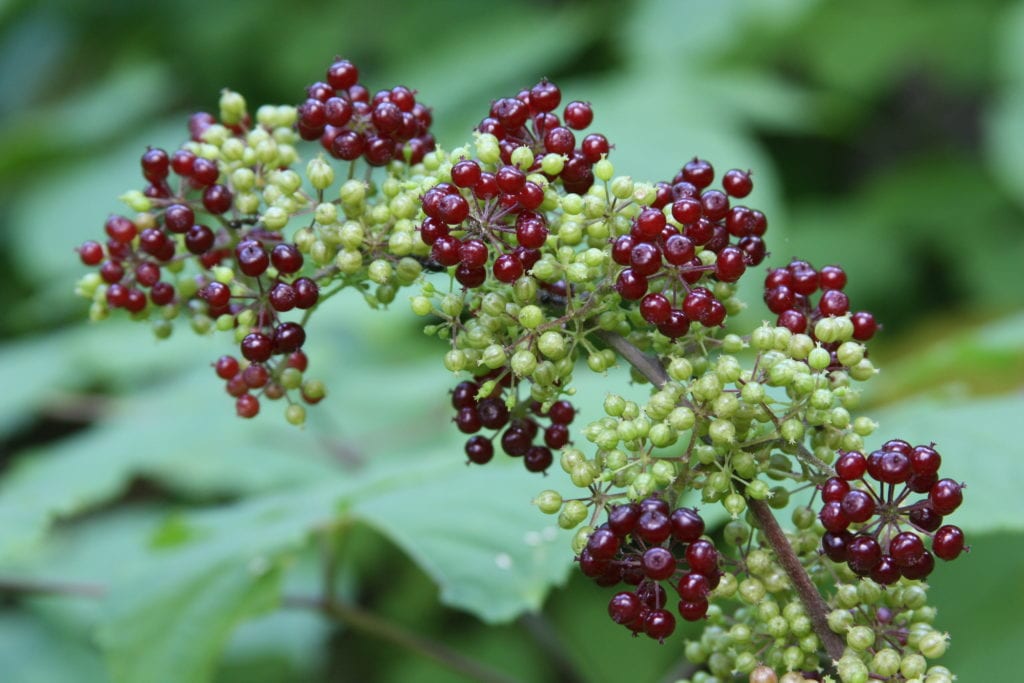 In the summer season, American Spikenard (Aralia racemose) produces a tasty purple/red berry with a flavor reminiscent of a blueberry and juniper cross. Great muddled into gin and tonic!

Definitions of permaculture abound. At its most basic, it’s “permanent agriculture” – growing perennial plants for food, instead of typical annual vegetable crops. I like Google’s definition: “the development of agricultural ecosystems intended to be sustainable and self-sufficient.” As that suggests, permaculture embraces ecological principles such as choosing plants for wildlife as well as people, and leaving soil in place (instead of tilling and fertilizing it every year) to preserve populations of helpful soil-borne fungi and invertebrates.

The majority of our food comes from industrial farm systems that employ next to none of these ecological principles. Instead of being a benefit to the greater ecology of an area these farms are one of the major contributors to habitat loss in this county. The less we rely on these systems the less our environmental impact will be. 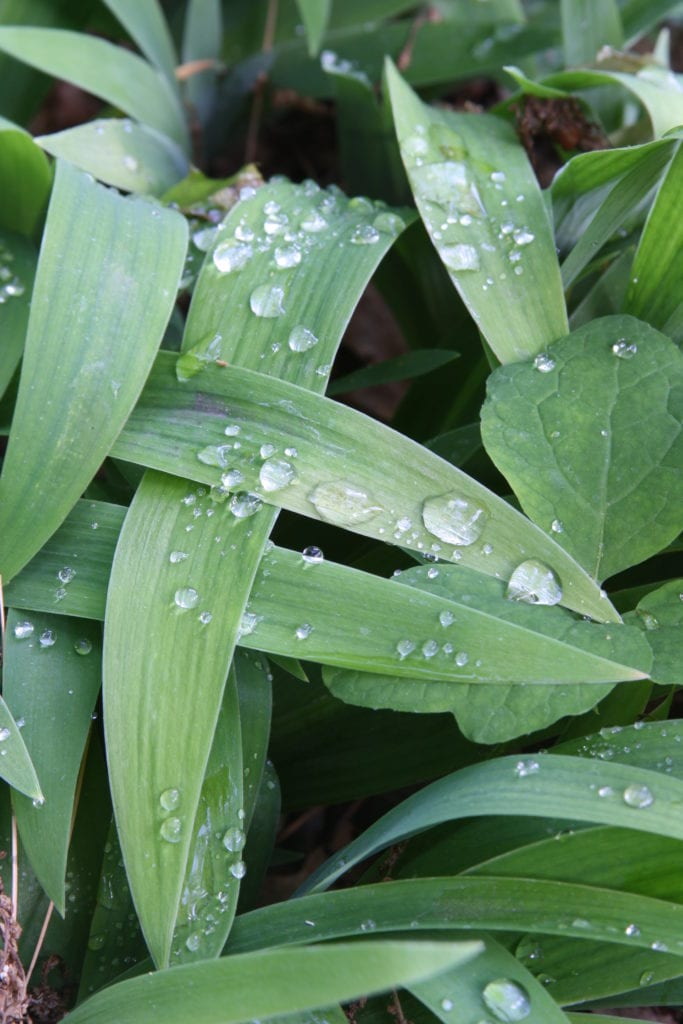 Though wild ramps Allium tricoccum are one of the tastiest native edibles out there this is also a rare species in New England. In this case cultivation is the only way to enjoy these flavors sustainably.

We can do even better. Since healthy habitats are dominated by native plants, which feed and shelter a vast diversity of wildlife species (remember the monarch butterfly?), alternative ways of growing food naturally get my attention. In my time at New England Wild Flower Society I’ve seen the demand for information about native edible plants skyrocket. Last spring, as many customers at our nurseries bought King Solomon’s-seal (Polygonatum biflorum) for its edible stems as for its graceful beauty in shady spots.

But as someone committed to claiming more ground for our region’s native plants, I’ve heard of some alarming practices advocated by less-knowledgeable permaculturists – planting more invasive species, for instance (yes, I really heard this). Should we really be planting more Japanese knotweed (Fallopia japonica) or autumn olive (Elaeagnus umbellata), just because we can eat them? Heck, no. 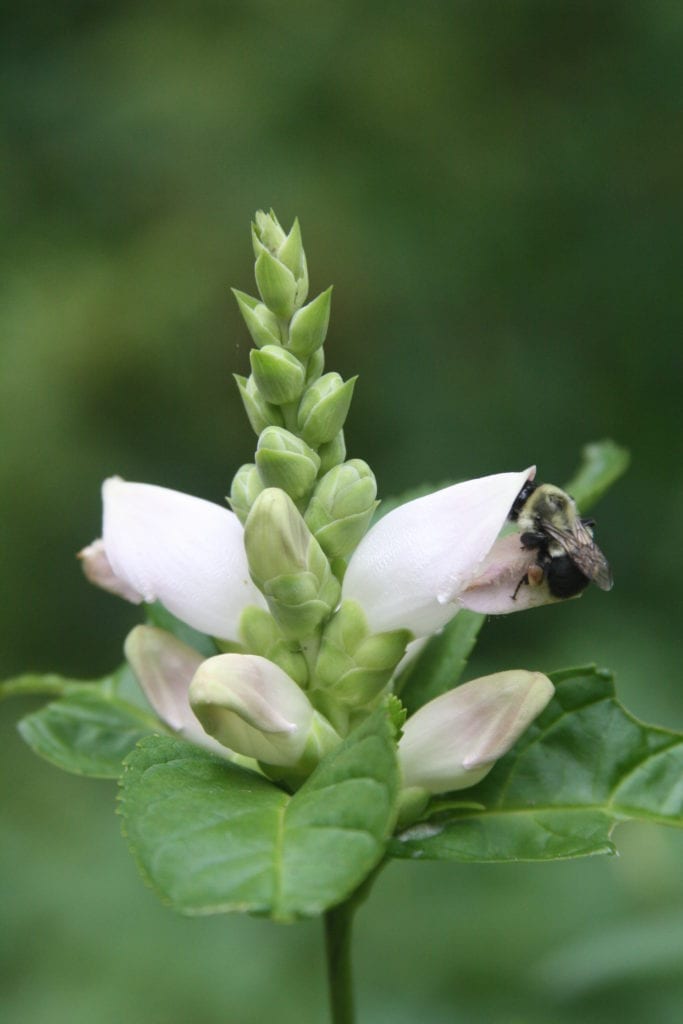 Though not an edible species, White turtlehead (Chelone glabra) is commonly threatened by invaders such as Japanese knotweed or purple loosestrife. In addition to its role as host for the Baltimore checkerspot butterfly this is also one of the bumble bee’s preferred pollen sources.

Let’s reframe the question using the physician’s credo, “First, do no harm.” Would planting Japanese knotweed do harm? Considering that it is one of the most aggressive of exotic invasive plant species in New England, one of 79 species estimated to cost the U.S. economy over $120 billion annually, and a destroyer of a variety of habitats, not the least of which are riparian zones displacing species such as white turtlehead (Chelone glabra), the host species for the Baltimore checkerspot butterfly (Euphydryas phaeton), “harm” is the mildest word that comes to mind.

Should we hack down and eat the existing Japanese knotweed before it consumes New England’s landscape? Absolutely! Like the fruits of autumn olive, the tender spring shoots of Japanese knotweed are delicious when properly cooked, say, in a crumb cake, or even pickled with some invasive garlic mustard. (Sample these and other recipes from New England forager extraordinaire, Russ Cohen.) 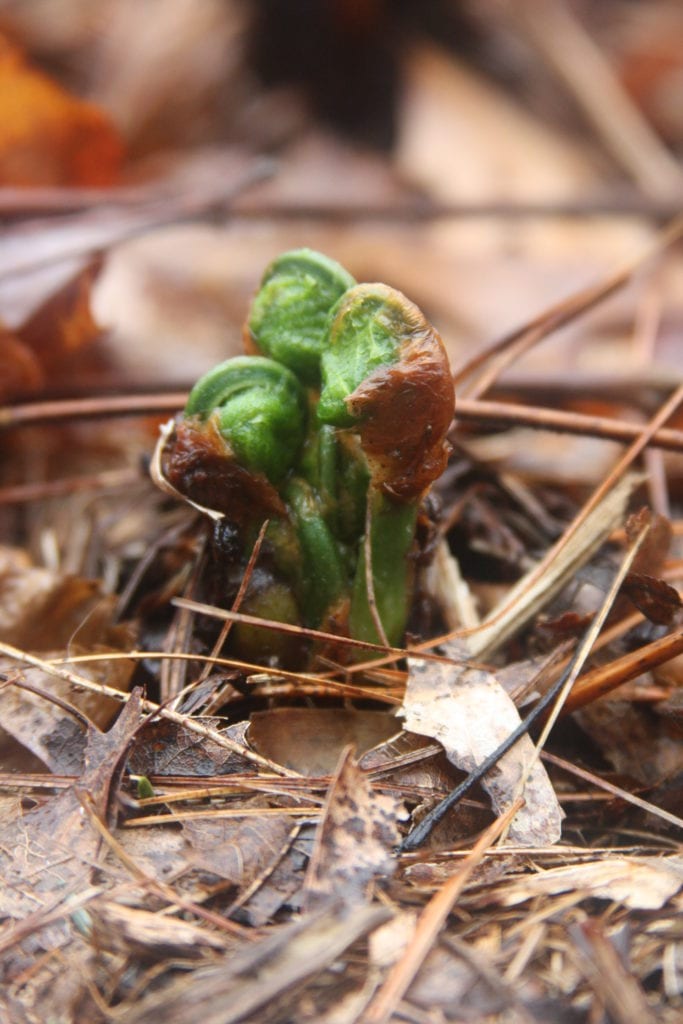 Ostrich fern Matteuccia struthiopteris is the only native fern that should be eaten. Look for a clumping fern with brown papery bracts and a distinct U-shaped grove running down the stem to know you have the right one.

So, from the perspective of a native-plants advocate, invasive species, no matter how nutritious, have no place in the permaculture garden. But edible natives do. Consider growing fiddlehead fern (Matteuccia struthiopteris), a fabulous addition to any table in early spring, or milkweed (Asclepias syriaca) to sauté its young shoots, flowers, or fruits with onion, garlic, and a touch of lemon juice. If you already forage for these in the wild, then growing your own supply leaves more for the critters and saves you the trip out. Both of these species also require virtually no maintenance, and the fern thrives in shade, where most annual vegetables wither. I may be biased, but they’re not bad looking, either. 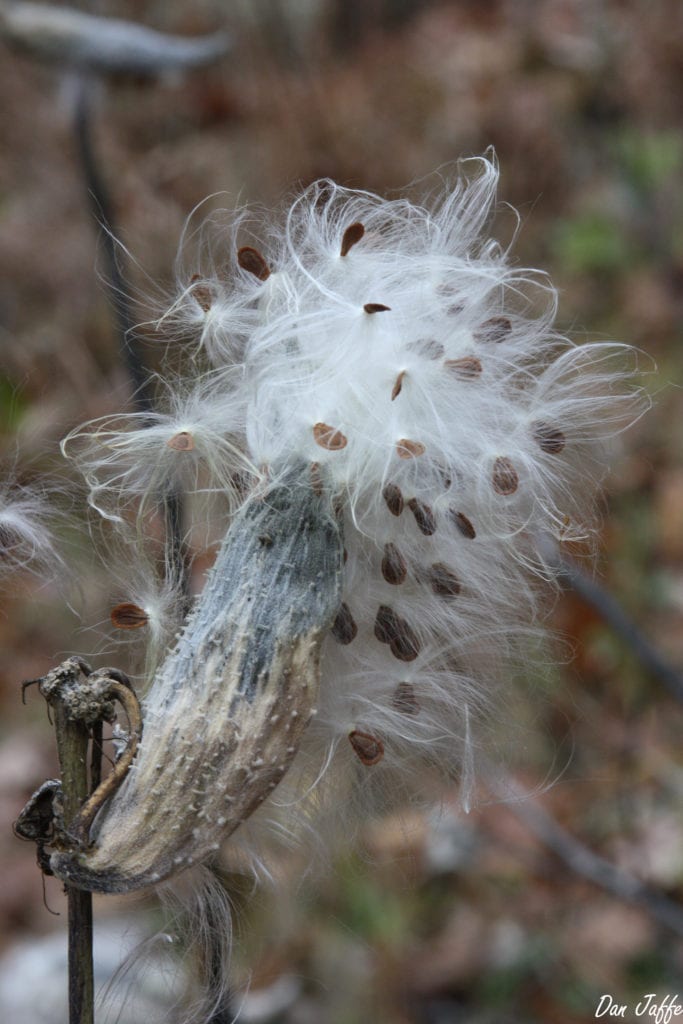 Though shown here well past the edible stage, this common milkweed Asclepias syriaca is producing seed that can be collected in order to start new populations of this tasty species. Simply sow seed in a sunny, well-drained site and water in. Plants should appear late the next spring.

Sheer deliciousness is another reason to think native. King Solomon’s-seal tastes like fresh asparagus injected with sugar water. Other plants, like milkweed, allow you to experience flavors never found in the grocery store. Even homegrown New England natives like blueberries – both low-bush (Vaccinium angustifolia) and high-bush (V. corymbosum) – hold more complex flavors than most varieties grown commercially (which are grown more for their size and shelf-stability then their flavor). And they’re rich in vitamins A, C, E, and K as well as a slew of antioxidants and various other beneficial minerals. But did you know that blueberry flowers also feed bumblebees, and their leaves serve as host sites for myriad butterfly species including the huckleberry sphinx, the saddleback caterpillar moth, and the brown elfin? 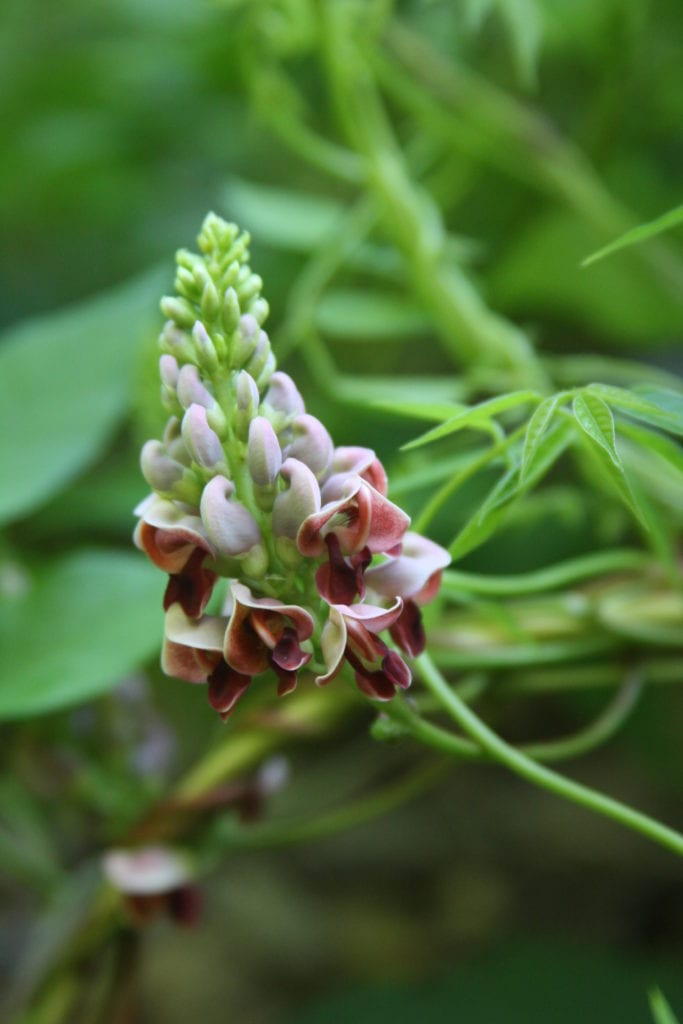 American groundnut Apios americana is an excellent starchy root. Dig tubers in the fall, slice thin and fry in a cast iron pan for amazing chips.

Another key principle of permaculture is sustainability, meaning, in this case, that you can keep it going without harming anything in the process. So, whether you raise blueberries or ground-nuts (Apios americana), never harvest more than a third of your crop (unless you want to keep the patch in check), and leave the rest for wildlife. And keep an eye out for more subtle fauna before picking. (“Look, kids, there’s a silver-spotted skipper (Epargyreus clarus) on this groundnut. Let’s pick that one over there instead.”)

You’ll also have more effortless food for next year’s table.

Dan Jaffe is the propagator and stock bed grower at New England Wild Flower Society (NEWFS) in Framingham, Massachusetts. He earned a degree in botany from the University of Maine and an advanced certificate in Native Plant Horticulture and Design from NEWFS. After interning at Garden in the Woods, Dan worked for a year as Plant Sales Coordinator at the Garden.