By Maureen Sundberg on March 17, 2015 in Native Plants

It’s hard to imagine what New York City looked like before settlers arrived and cleared the way for development, but a new one-acre garden in the middle of Brooklyn tries to recreate the ecology of the greater New York City area, Long Island, and coastal areas of New Jersey as it existed for the centuries before Europeans arrived. In his session “Locally Sourced: Growing Native Plants from Collected Seed,” Brooklyn Botanic Garden (BBG) curator Uli Lorimer painted ELA Conference attendees a picture of the garden he envisioned and described the work it took to design, install, and maintain it. 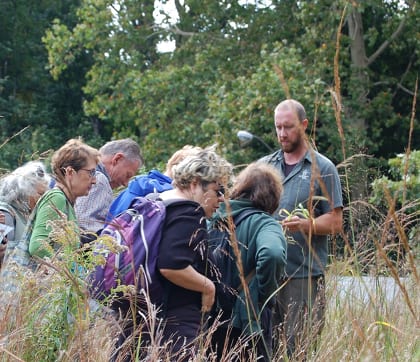 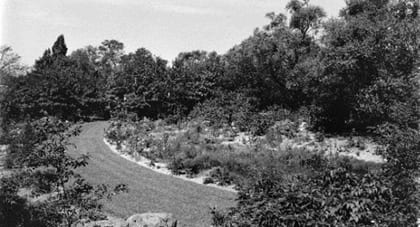 This photo from 1933 shows a view of the Local Flora Garden.

This garden, which is now called the Native Flora Garden, has matured into a collection of giant trees and many other plants which thrive in the ample shade and rich topsoil that has accumulated over the years. However, many of our native plants, especially prairie and pine barren plants, grow best in a sunny habitat which the Native Flora couldn’t provide anymore.  Consequently, the garden embarked on a planning and design process over 10 years ago, which culminated in the Native Flora Expansion, a collection of habitats not already represented, and most importantly, established using wild collected seed to preserve the genetic diversity of our eco-regions here in New York, New Jersey and Pennsylvania. The six new habitats represented in the expansion are pine barrens uplands and lowlands, pine barrens pond and bog, coastal plain grasslands, serpentine barrens, and savanna/woodland edge. 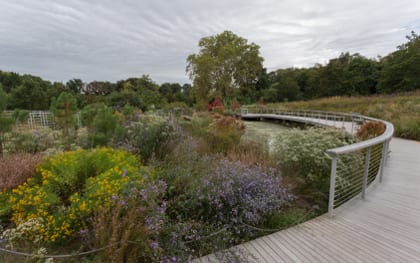 Pine Barrens Uplands, show in the fall of 2014, is one of six new habitats at Brooklyn Botanic Garden.

BBG staff, along with designer Darrel Morrison, conceived of a garden that started with 150 different plant species and has morphed, in its two short years, into a wild, beautiful place teeming with animal and plant life. Uli showed us photos of honeybees on the Asclepias syriaca (common milkweed), a crab spider on the Monarda punctata (spotted horsemint), swallowtails, moths, caterpillars, stick insects, praying mantis, the Fowler’s Toad, and a wonderful candid shot of one of our nesting red tail hawks having a rodent snack inside the garden. 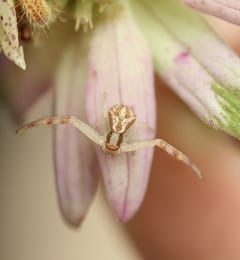 How did this garden come to life? Drawing from survey work done by BBG scientists as a part of the New York Metropolitan Flora Project, Uli visited different physiographic provinces. Storm King Mountain became a design template for a typical Hudson Valley landscape; Hither Hills State Park and Hempstead Plain were inspiration for a typical coastal plain and meadow landscape; Parker Preserve, Webb’s Mill, and Martha, New Jersey evoked pine barrens landscapes. Many of these locations also served as sources of permitted seed collecting.  Uli recounted that Hempstead Plain in particular was an important source for seed collection, as only 19 acres remains of what used to be an astonishing 40,000 acre site.

Uli, Darrel, scientists from BBG, and colleagues from neighboring institutions like the Green Belt Native Plants Center, collected seed and grew seedlings until they could be planted as plugs in the garden. In preparation for planting, a landscape design firm instructed workers to remove three to four feet of soil and bring in a designed soil type that was largely sandy in texture and very poor in organic matter. Driving machines over existing soil created an artificial hard pan where water wouldn’t percolate further, but would instead move laterally across the landscape, simulating the accumulation of clay particles lower down in the soil horizons, which happens naturally as time passes.

Installing the garden involved the direct sowing of 16 pounds of grass seed from wild collected sources, installation of over 17,000 plugs, lots of time lovingly watering tiny plants, and editing out weed growth. Cover crop seeds like partridge pea smothered weeds so that native grass seed had time to grow. Uli told us that with native grasses, “The first year sleeps, the second year creeps, and the third year leaps.” We are certainly seeing the beginning of our leap year, three years after the garden was installed.

One of the great questions asked at the end of the workshop by a conference participant was, “What were some of your seed collection strategies?” Uli spoke of spending five to six years immersing himself in the process. Reading up on the bloom and seed times of different species was a critical step, and Uli recounted spending up to three seasons trying to collect seeds for some particularly frustrating species. One year, too early, the second year too late, and by the third year, he was able to finally collect the seed. Another strategy he shared with the audience was his efforts to collect from as many individuals and from as many populations as possible, to bring in genetic diversity.

One lesson Uli learned was: “Don’t sow all seeds at once.” He spoke from experience as he recounted a day they sowed a lot of grass seed, only to have it rain torrentially the next day and wash away all the seed. Another participant asked about sources for some of the beautiful and underused plants Uli showed in his slideshow, and he admitted that many of the plants were hard to find. However, he pointed attendees in the direction of the Long Island Native Plant Initiative, http://www.linpi.org/, an organization that has done great work to preserve plants in the New York City area. 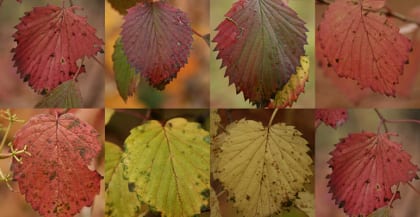 The variation in Viburnum dentatum leaves provide a beautiful range of color. 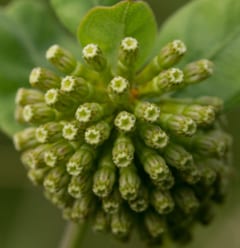 Jenny Blackwell is an assistant gardener at Brooklyn Botanic Garden and an instructor for the Soil Management course of the Horticulture Certificate Program. Previously, she managed the NYC Compost Project at BBG and continues to nurture her passion for soil, turning compost, and the biology beneath our feet.  She can be reached at jblackwell@bbg.org.

The Scoop on Dog Waste
Permeable Solutions for Sloped Surfaces: A Case Study