By Maureen Sundberg on March 17, 2015 in Stormwater Management

In the face of today’s regulatory environment, it is important to consider the many different green infrastructure practice alternatives available for use in urban site design. One alternative whose benefits are clear and well understood is porous asphalt. Design advancements over the last two decades have established its relevance both as a transportation surface and an effective stormwater management strategy.

In New England, we have witnessed the successful application of porous asphalt for sidewalks, parking lots, subdivision roads, and highways. Research has demonstrated its function for stormwater attenuation and recharge, runoff treatment, and chloride source control (Houle, 2008; Roseen et al., 2012; Roseen et al., 2014). Its diverse benefits make it an often cost effective infrastructure alternative that can help to balance development goals with sustainability objectives. As an engineer and practitioner, I commonly witness projects that would benefit from the use of porous asphalt, but is excluded from the final design because of topographic or slope concerns.  Although porous asphalt may not be the solution for every site, there are strategies that can be employed to manage these constraints. This article presents a case study that incorporated porous asphalt on a site with steep slopes and varying topography. Recommendations and details are provided herein to aid designers when considering permeable surface technologies as part of their landscape design. 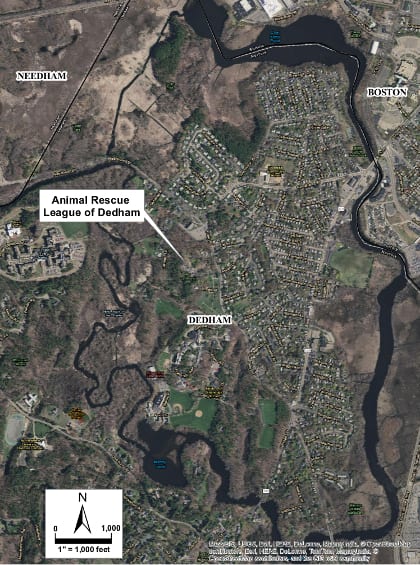 In 2010, the Horsley Witten Group, Inc. (HW), in partnership with ARQ Architects, was retained by the Animal Rescue League to redevelop their animal shelter facility in Dedham, Massachusetts. The Animal Rescue League has a strong commitment to sustainable design and set a LEED Gold certification goal for the project and showed an interest early in the design process for an innovative stormwater management approach. HW worked closely with the owner and architect on the site grading and landscape design. The project involved an expansion of the existing building structure, additional parking, a new driveway, stormwater infiltration systems, and other miscellaneous site amenities to improve the overall visitor and staff experience. The site is located atop a small, drumlin hill in northwest Dedham. A locus map is provided in Figure 1. The slopes surrounding the site are steep and bedrock outcrops are scattered throughout the property, creating a challenge for siting adequate stormwater management facilities.  Because the project proposed to increase impervious area (e.g., asphalt, concrete, and rooftop), stormwater had to be managed to a level that met or improved the existing runoff hydrology.

During the initial site evaluations, the team discovered that despite the many bedrock outcrops, the site was comprised of primarily sand and gravel sub-soils, making it suitable for stormwater infiltration in strategic locations. However, the numerous site constraints left only minimal available area for above-ground management facilities. Therefore, the design team considered permeable pavement for the proposed paved surfaces. After a thorough review of pavement options, the design team selected porous asphalt as its preferred alternative due to its cost, LEED credits, local availability, and documented effectiveness for runoff treatment and attenuation.

The proposed porous asphalt surfaces included the primary visitor parking lot and a driveway for secondary building access and solid waste pickup.  The site plan in Figure 2 depicts these improvement areas. The parking area consists of six parking stalls and is 3,000 square feet in size. The driveway dimensions are 80 feet long by an average 15 feet wide. The constraints encountered for the parking lot included existing underground electric and water lines which remained in place during and after construction. The driveway was surrounded by bedrock outcrop and the new building foundation. The proposed pavement slopes were as high as 5%. 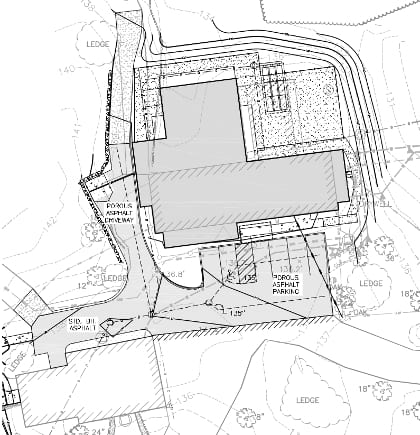 Literature suggests that permeable pavements should not be used on slopes exceeding 5% (Brown, 2008); however, there is little research available that explains how a system may function with existing slopes greater than 5%. As the slope of a permeable surface increases, the potential for exhibiting runoff from that surface also increases. At 10%, this likelihood is high, particularly after several years of use and gradual clogging of the permeable surface. At 5%, this correlation may not be as direct depending on the maintenance regime and quality of the material installation. Also of note is the chance of subsurface erosion, settling, and clogging of the system sub-base if water does not collect and infiltrate over the sub-soils evenly. At 10%, it may be cost prohibitive to construct a flat sub-base to prevent sub-surface erosion, but at 5% there may be design alternatives available to limit excavation and earth work fees. One such strategy was employed by the design team for the driveway design at the Animal Rescue League site. 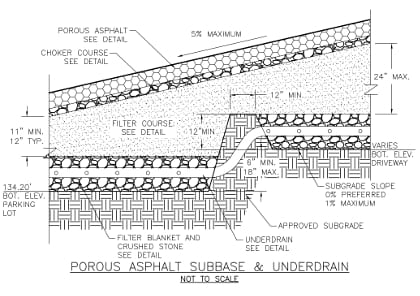 Because the surrounding slopes on the site were steep and the likelihood of encountering bedrock was high, HW designed the porous asphalt driveway sub-base as a tiered system, while providing a uniform 2% slope of the pavement surface. The driveway profile includes a series of underground basins with flat bottoms to promote infiltration. Each underground basin is separated by a low-permeability soil barrier to prevent lateral water movement. A comparable aboveground stormwater system would resemble a series of infiltration basins constructed at varying elevations, or a similar step-pool water feature. In this application, the driveway sub-base is equipped with an underdrain pipe that is elevated approximately five inches above the bottom of each sub-base tier or basin. Pipe elbows and angles are used to drop the underdrain down through each sub-base tier. A longitudinal profile of porous asphalt driveway and sub-base provided in Figure 3 highlights these design features.  Figure 4 shows the driveway and Figure 5 shows the parking lot immediately after installation, which are reportedly functioning well today, approximately four years later. 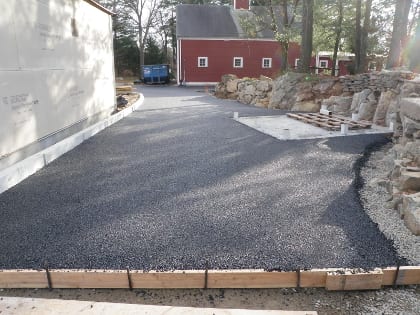 Although a 5% maximum surface slope is generally preferred, by using the methodology depicted in Figure 3 surface slopes as high as 7% or 8% may be acceptable for limited applications or in highly permeable soils. Soil conditions, separation to groundwater, sub-base compaction, pavement mix and installation, adjoining infrastructure, and operation and maintenance are all important factors that should be considered, particularly at challenging sites. Construction oversight by qualified staff is critical for any successful permeable pavement installation no matter how experienced the design team or contractor. Although the Animal Rescue League example may be small in scale, the design methodology implemented can be transferrable to larger sites, such as commercial parking lots, subdivision roads, and residential driveways. 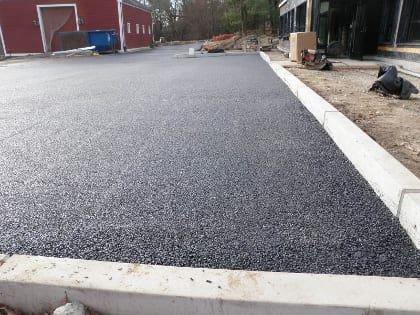 If as a designer, you are considering using porous asphalt or any other permeable paving technology, there are successful applications of varying scales scattered across the northeast that are highlighted in a number of helpful resources and databases. A short list of these resources is provided as references to this article.

Kristopher Houle is a Project Engineer at the Horsley Witten Group supporting civil engineering, ecological restoration, and stormwater management projects. He has over eight years of experience in water resources design, research, and monitoring. Prior to joining Horsley Witten, Kris served as a research assistant at the University of New Hampshire Stormwater Center. There he studied the cold climate performance of a variety of permeable pavement technologies and coauthored several peer-reviewed publications on porous asphalt. Kris is a registered professional engineer in Massachusetts and holds both a Masters’ and a Bachelors’ degree in Civil Engineering. He currently serves as the New Hampshire Director for the Society of Ecological Restoration – New England Chapter. Kris may be reached via email at khoule@horsleywitten.com; by phone at (978) 499-0601; or through the Horsley Witten Group website, www.horsleywitten.com.

A Wild Garden in the Middle of Brooklyn
Strategies to Protect Vernal Pools in the Built Environment: Raising Awareness