By Maureen Sundberg on March 17, 2015 in Gardening Basics

As the piles of snow finally melt from lawns and garden beds in spring, we’re often confronted with the waste left behind by winter dog walkers. At the least, these surprise packages are a messy annoyance. With an estimated 70 to 80 million dogs in the United States, uncollected dog waste also spells trouble for our personal health, our pets’ health, and the health of our waterways. 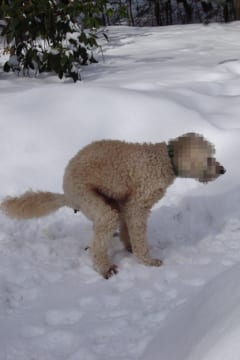 The most obvious risk of pet feces is to the individuals working or playing in areas where waste accumulates. Dog waste contains a variety of pathogens, and a number of diseases can be passed from pet waste to humans, including campylobacteriosis, salmonellosis, toxocariasis, and antibiotic resistant strains of E.coli. Other pets who enter contaminated areas can also be exposed to diseases that they carry off with them and spread.

Aside from disease-causing bacteria, waste may also contain parasites such as roundworm, hookworms, and taxoplasmosis (carried by cats). Unsuspecting humans and animals can come in contact with eggs from a parasite long after the waste has broken into smaller bits. Unfortunately, the threat doesn’t stop there.

The U.S. Environmental Protection Agency lists pet waste as a significant source of non-point pollution. As the name suggests, the pollution comes not from a single identified source, but many diffuse sources. In the case of dog waste, messes left on lawns, curbs, sidewalks, and streets wash into local waterways either directly or through the storm sewer during a rainstorm. Often storm drains don’t connect to a treatment facility, so the untreated animal waste ends up directly in lakes and streams.

Researchers are now using genetic testing methods to determine whether fecal contamination in waterways can be contributed to dogs. In one case, they sampled stormwater from a rain garden near where people often walked their dogs. Testing identified genetic markers that linked contamination directly to our canine friends.

In addition to carrying a variety of pathogens, dog waste contains lots of nutrients, and those nutrients (often combined with excess fertilizer that also runs off lawns during storms) may promote the growth of weeds and algae. Over time, algae blooms can render areas of some waterways uninhabitable. Additionally, as the waste decomposes in the water, it takes up oxygen needed by fish and other aquatic life and may also release ammonia. The combination of low oxygen levels and ammonia creates an unhealthy environment for aquatic life.

Dog Waste in the Air

The problems caused by pet waste don’t end on the ground. Testing in four Midwestern cities identified significant quantities of fecal bacteria from dog waste in the atmosphere in two locations – Cleveland and Detroit, especially in the wintertime. Researchers attributed the greater than expected bacteria from dog feces to a reduction in other bacteria from soil, dust, leaf surfaces, and water surfaces as leaves drop and snow covers the ground.

How Big Is the Problem?

Sources estimate that an average dog produces three-quarters of a pound of waste each day. That’s over 270 pounds of waste every year. Unlike wild animals that might establish a territory of 12 square miles (suburban coyote) to 1000 square miles (wolf), our canine friends generally walk where humans lead them. It’s easy to see that walking a dog on the same route, day after day, without waste pickup leads to a lot of accumulated waste.

In the Charles River Watershed, the waste produced by cats and dogs was estimated to amount to nearly three tons each day. And, the Environmental Protection Agency refers to estimates that over two or three days, the droppings from a population of 100 dogs within a watershed of up to 20 square miles draining into a small coastal bay would contribute enough bacteria, nitrogen, and phosphorus to close the  bay to swimming and shellfishing temporarily.

How to Deal with Waste

Advice on pet waste disposal varies, but most sources agree that collecting and throwing waste into trash that will be incinerated is a good option. Also, flushing dog waste down the toilet will ensure that the waste is treated by a sewage plant or septic system. (Do not flush cat waste. The litter causes problems with the treatment system, and Toxoplasma gondii, the parasite associated with toxoplasmosis, can survive routine water treatment.)

Never put pet waste in a backyard compost pile, which may not get hot enough to kill parasites and pathogens. But, burying waste at least a foot deep and away from gardens that produce food crops is an option when groundwater levels remain well below the waste. A device such as the Doggie Dooley (an in-ground disposal device) offers a slightly more sophisticated solution.

Perhaps the key to dealing with dog waste is raising awareness of the risks pet waste poses when it is not picked up. Ultimately, educating pet owners to the detrimental effects of pet waste on local water and air quality may be the best solution.

Maureen Sundberg edits the ELA Newsletter and writes from her home in Andover, MA where she also gardens, dog walks, and scoops poop. She can be reached at ela_new@verizon.net.

The Living Landscape: Designing for Beauty and Diversity in the Home Garden
A Wild Garden in the Middle of Brooklyn