By i.am.georgia.harris on February 15, 2021 in Climate Change, Landscape Challenges

Hilary Stevens will present the Luncheon Keynote at ELA’s Conference & Eco-Marketplace on March 3.

Coastal wetlands are a valuable component of our landscape for many reasons.  They provide habitat to many species that are important for fisheries and recreation, they reduce wave energy that can erode the shoreline, and they help reduce coastal flooding.  It turns out that they also help control the rise of greenhouse gases in the atmosphere by trapping carbon dioxide in plants and in soils.

When thinking about plants as a carbon sink, most people envision a forest.  Trees are indeed very good at storing carbon in their woody tissues, so maintaining well-managed forests is a great way to boost carbon sequestration.  But it turns out that coastal wetlands are actually more efficient than forests at pulling carbon from the atmosphere and trapping it for long-term storage. Habitats such as salt marshes, seagrass meadows, and mangroves can sequester up to ten times as much carbon per acre as an upland forest.

One main difference is in how the carbon is stored.  Upland forests store carbon in the biomass of the plants.  As a tree grows in height and girth, it is slowly storing more carbon each year.  However, tidal wetlands, mangroves, and seagrass meadows store that carbon for the short term in plant tissue and for the long term in the soils. Seagrasses and salt marsh plants grow quickly, adding a lot of leaf and stem material each year. These systems have a high rate of sedimentation, so when the organic material falls to the bottom, it is quickly buried.  Because the environment is so wet, there is not enough oxygen to allow decomposition, and the organic material remains in that system for many years, sometimes centuries. This whole system is called “coastal blue carbon” or just “blue carbon” to differentiate it from upland “green carbon.” 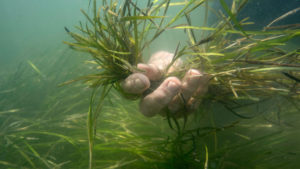 Freshwater wetlands can have some of these attributes, but they are usually not good carbon sinks because there are microbes in the soils that produce methane as they break down dead plant material.  Methane is often more potent as a greenhouse gas than carbon dioxide, so any methane emissions from wetland soils will negate the carbon dioxide sequestration.  In areas where tidal flow is blocked by impoundments, restoration of tidal flow will raise the salinity in the water and inhibit the microbes that produce methane.

Carbon storage in soils can last for many years, but it is not permanent.  Because the organic matter is preserved by the anaerobic environment, disturbance can cause that carbon to be released back into the atmosphere.  Draining a coastal wetland can bring oxygen into the soil and allow that material to break down and be converted into carbon dioxide or methane.  Allowing coastal soils to erode can have a similar effect.  For all these reasons, it is vital to protect and restore coastal wetland systems and prevent them from releasing that stored carbon.

Unfortunately, coastal wetlands often grow in areas that are subject to development pressure.  Waterfront property is highly valued for many uses, whether that be an urban working waterfront, residential lots, or other commercial property.  In such areas, the natural system is often either filled, paved, or replanted with non-native species that do not have the same capacity to thrive in tidal conditions and store carbon.  Most coastal wetlands in the US have already been lost to these practices, making it all the more important to protect what remains.

Coastal wetlands are precious areas for so many reasons.  The current understanding of the role they play in trapping greenhouse gases adds one more reason to conserve and restore these valuable areas.

Hilary Stevens is the coastal resilience manager at Restore America’s Estuaries. She oversees the Blue Carbon and Living Shorelines programs. She is a geologist and environmental scientist with extensive experience in coastal resource management. Ms. Stevens has worked on coastal issues and climate change adaptation around the U.S. and globally, with an emphasis on using best-available science to address community needs and improve resource management. She has a particular affinity for island communities, stemming from her time working in Saipan, Northern Mariana Islands, and as a Peace Corps volunteer in the Philippines. She holds a master’s degree from the Yale School of Forestry and Environmental Studies and a bachelor’s degree from Wesleyan University.