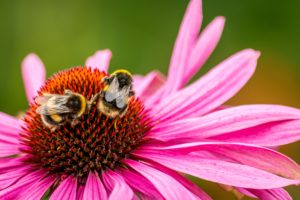 The Xerces Society is running a national campaign encouraging consumers to question retail and wholesale nurseries about their use of pesticides on the plants they sell. Consumers have a fantastic amount of power to influence what nurseries sell. Xerces society created a webinar, brochures for both consumers and nurseries, and helpful hints on speaking with your local nurseries about their practices. Read more at Buying Bee-Safe Plants, Offering Bee-Safe Plants: A Guide for Nurseries, and  Xerces YouTube.

Nature can be a powerful antidote to all the uncertainty and disruptions present at this moment in time. Children especially can find comfort in activities that mirror the everyday routines of school or daycare and find enjoyment in being outside every day. Read more at Arnold Arboretum Harvard.

Can We Stabilize Global Temperatures?

The world may be barreling towards climate disaster, but rapidly eliminating planet-heating emissions means global temperatures could stabilize within just a couple of decades, scientists say. Read more at The Guardian.

Though spring is in the air for much of the country, it is still too early to get out and work in the garden. But you can enjoy bringing nature inside. Join Rowan Payne-Meyer for this delightful video on forcing winter stems. Read more here The Scott Arboretum.

Has Offshore Wind Finally Arrived on the U.S, East Coast?

After years of false starts, offshore wind is poised to take off along the East Coast. Commitments by states to purchase renewable power, support from the Biden administration, and billions in new investment contribute to this fledgling industry’s emergence. Read more at Yale Environment 360.

According to a new study that synthesizes hundreds of thousands of carbon observations collected over the last quarter-century at the Harvard Forest Ecological Research site, climate change has increased the productivity of forest. Read more at The Harvard Gazette.

The annual update of their sea-level “report cards” by researchers at William & Mary’s Virginia Institute of Marine Science adds further evidence of an accelerating rate of sea-level rise at nearly all tidal stations along the U.S. coastline. Read more at William & Mary News.

Bees of the Eastern Forest

People associate bees with open habitats, plenty of flowers, and ample sunshine, but scientists know bees were around when the eastern states mainly were forest. What has happened to those species? Read more at Xerces Society.

Invasives Insects and Disease Are Killing Our Forest

The U.S. wasn’t ready for the pandemic. And it isn’t prepared for the next contagion to strike our woodlands. It’s not just humans; trees also suffer plagues. Read More at The New York Times.

Measuring Moisture in Soil from Space

Soil moisture regulates plant growth, affecting wildlife and ecosystems but it’s time consuming to measure soil moisture by hand. NASA’s SMAP (Soil Moisture Active Passive) satellite was launched on January 31, 2015. Its job is to monitor the water content in soils around the globe. Read more at The Cary Institute.

The amount of plastic choking the planet, most notably the world’s oceans, is unfathomable. Our oceans, even our own bodies, are drowning in plastic. Change is possible, but we are at a tipping point. Read more at ecoRI News.

More than 40 species of birds-of-paradise live in New Guinea’s swaths of the Indo-Pacific rainforest region, one of the largest intact tropical forested areas on Earth. This slide show explores the landscapes, forests, birds, mammals, and insects of New Guinea – the most species-rich island on Earth. Read more at Cornell Lab.

Spread across the planet are millions of hectares of abandoned cropland, lying fallow and unused. But suppose we used this empty land to grow biofuel crops. In that case, we could meet a significant share of our green energy needs going into the future – while simultaneously limiting the land-guzzling impacts of biofuels that give them a bad name. Read more at Anthropocene Magazine.

The Bahamas: A Flamingos Success Story

In the 1950s, in the Bahamas’ southernmost islands, scientists discovered only a scant hundred flamingos remained of the last breeding colonies of American Flamingos. Conservation efforts began and have preserved nearly half of Great Iguana Island as a national park. Today the flamingo population tops 80,000 birds. Read more at Audubon Magazine