Zoo New England, the organization that runs the Franklin Park (Boston, MA) and Stone Zoos (Stoneham, MA), has a dynamic Field Conservation Department, involved in numerous rare species conservation projects around Massachusetts. Our goal as working conservationists is to help protect and restore the living treasures that share our world. Protecting plants and animals that cannot speak for themselves is difficult enough, as exemplified by the movement in the 1960s and 1970s following Rachel Carson’s Silent Spring to protect our natural systems from toxic pesticides. However, once protections are in place, we can generally expect that they will continue to work. The restoration component is seldom as straightforward; species that have disappeared from an area won’t return until the reason for their disappearance is understood and corrected. Even then, restored ecosystems require constant monitoring as they establish themselves to ensure that they remain healthy and viable.

For this reason and others, ecological restoration is often a slow process. The first step, in most cases, is to establish the right plants. As primary producers, plants form the foundation for the species of fungi, invertebrates, and larger animals that will hopefully use the habitat in the future. That’s why we talk so much about our wildflower and native plant projects; our true goal is to restore entire ecosystems of rare native species, but you have to start with the plants! 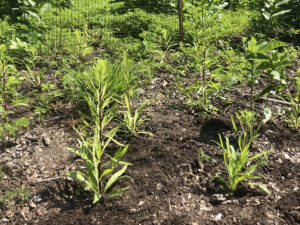 Fortunately, our efforts are already starting to bear fruit. Our annual surveys of native plantings that we’ve re-introduced across the state have shown that our plants are not just surviving, but thriving. Even better, we’ve documented the presence of native insects using those plants, which means that before long, the animals that feed on those insects in turn will start to appear. One such exciting insect visitor is the ornate bella moth (Utethesia ornatrix).

These handsome, colorful moths are day-flying, unlike many other moth species, and they specialize in a family of legume plants called rattlebox (genus Crotalaria). Rattlebox has poisonous alkaloid compounds that make it inedible to most insects, but ornate bella moth caterpillars are specially adapted to isolate and store those toxins in their own bodies, effectively co-opting the plant’s defensive system for themselves! Our wildflower restoration site in Concord, MA has a small but healthy population of flowering rattlebox, and we were excited to document this ornate bella moth flying around the site.