The City of Lawrence, MA, has three very distinct rivers flowing through its boundaries. The wide Merrimack River flows through the heart of Lawrence’s Mill districts. The Shawsheen River flows northward through a small river floodplain forest. The Spicket River has been engineered to flow through residential neighborhoods, and the process of constructing the Spicket River to facilitate residential and industrial development along its banks has created a narrow stream corridor. Over the years, the river has been straightened, contracted, and filled, factors that contribute to the heavy and extensive flooding that regularly occurs. 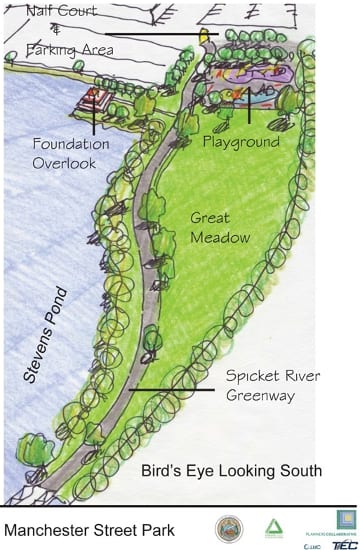 Groundwork Lawrence, in partnership with the City of Lawrence and the Commonwealth of Massachusetts, has focused attention on the Spicket River and its surrounding Arlington and North Common neighborhoods. Groundwork recently implemented the Spicket River Greenway with the goal of improving accessibility to and the aesthetics of the river, restoring the riverbanks, managing invasive plant species, and improving water quality and instream habitat while providing a safe, continuous pedestrian linkage from Steven’s Pond to the river’s confluence with the Merrimack River. The Greenway creates two new riverfront parks, improves six existing parks, and provides over 3.5 miles of riverfront paths. The project has dramatically changed the way people move around the city. 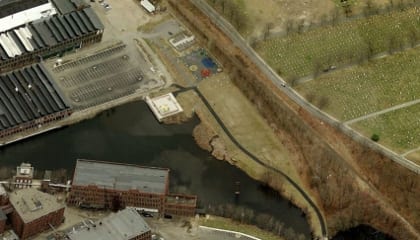 Manchester Street Park is one of the great places along the Greenway. The Park is a rehabilitated brownfield site which was once a trash-to-energy incinerator and rail-yard, and it is located at the junction of the Spicket River Greenway and Manchester Lawrence Branch Rail Trail, making it a perfect site for environmental improvement and interpreting urban ecology. The 11.3-acre pond provides habitat for warm water fish species as well as a range of birds, including red-tailed hawks, herons and osprey. Along the pond’s edge one can find frogs and snapping turtles in the cattails. This past summer, Groundwork further invited wildlife into the park by improving the railroad embankment that links the Greenway to the rail trail and then creating a pollinator garden and implementing a range of educational and volunteer projects at the site.

With support from the Cornell Lab of Ornithology’s Celebrate Urban Birds program, the New England Wildflower Society, the Ecological Landscaping Association, Elevated Thought, and more, Groundwork has been able to make Manchester Street Park a more beautiful place and transform open space into higher quality habitat for urban wildlife, all while increasing opportunities for hands-on environmental education in Lawrence. Here is a quick rundown, with pictures, of what we did from May to July of 2013! 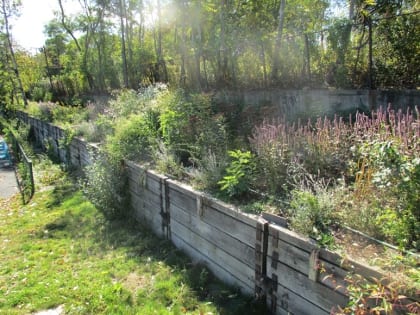 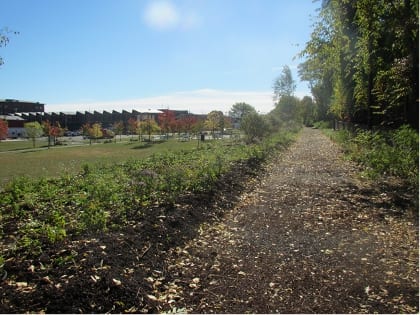 Volunteers from Pfizer Pharmaceutical helped to clear more invasive species, and planted 200+ pollinator friendly wildflowers, shrubs, and small trees. The volunteers worked faster than we could keep up with, and got far more done than we could have anticipated! 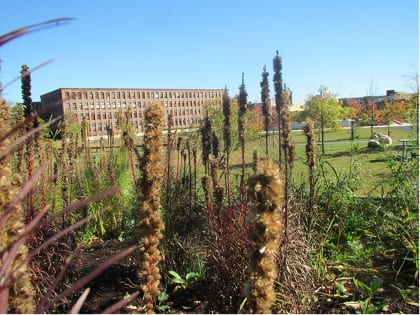 Volunteers from New Balance, the Groundwork Lawrence Green Team, and the Spicket River Crew planted approximately 1,600 wildflower plugs specially grown for us by the New England Wildflower Society. The truck was PACKED with plants for the drive home from Nasami Farm, and our volunteers worked hard all day to get the plants in the ground. They have acclimated well and are doing great in their new home; some have even started to flower. 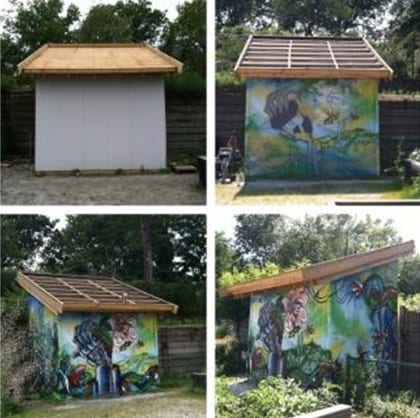 Lawrence Youth Build constructed a beautiful new shed in our community garden at Manchester Street Park. The roof of the shed was specially designed to be a “green roof” and will be planted with a variety of colorful plants in the near future. The shed then got spiced up with an incredible urban nature themed mural. Alex Brien, an artist from the non-profit organization Elevated Thought, designed and painted a beautiful mural for the shed. While he was working on the shed kids from Lawrence’s Boys and Girls Club got the chance to visit Alex and learn about mural composition and design. 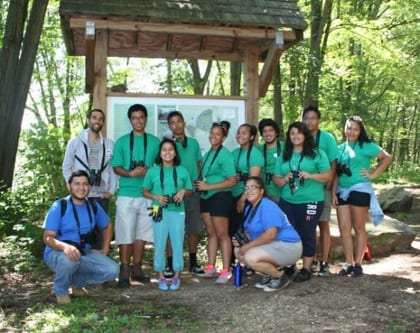 Finally, in July the 11-13 year olds at Groundwork’s Urban Adventures summer camp spent an entire week celebrating the urban birds of Lawrence. They learned how to use binoculars, how to identify birds, and even collected scientific data on populations of urban birds at Manchester Street Park. The data has been sent to Cornell’s lab of ornithology to be used for bird conservation.

Brad Buschur is s responsible for managing the community input, design, and construction of landscape and infrastructure improvements for Groundwork Lawrence (GWL) projects in Lawrence, MA. Projects include the Spicket River Greenway, Oxford Paper Site, The Ferrous Site, The North Common, and community and schoolyard garden sites. He oversees GWL’s expanding role in supporting low-impact development (LID) practices and economic development in the city and implementing Lawrence’s Open Space and Recreation Plan. Brad holds a BA in Urban Planning and Political Science from Miami University and a Masters in Landscape Architecture from University of Massachusetts, Amherst. He may be contacted at bbuschur@groundworklawrence.org.

A Master Plan for Garden in the Woods
Living with Leaves: Transform your practice so your business is not “Picking Up”