By Maureen Sundberg on October 15, 2013 in Native Plants, Public Gardens and Parks, Restoration

Garden in the Woods has inspired generations of professional horticulturists, landscape designers, and backyard gardeners alike to create gardens that look to nature for inspiration. Embracing an early 20th-century trend toward “wild” gardens, the Garden’s founder, Will Curtis, sought to highlight the inherent glacial landscape of this property in Framingham, MA, and reflect the beauty of nature by designing and creating gardens that reflected natural habitats. 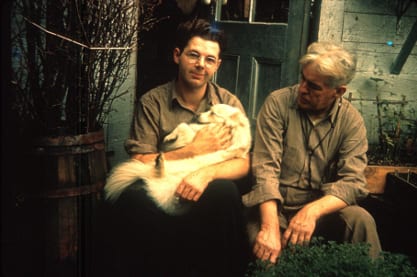 Dick Stiles and Will Curtis spent more than thirty years building and caring for Garden in the Woods. They left the Garden in the care of New England Wild Flower Society in 1965.

Curtis envisioned the gardens and worked with his longtime partner, Dick Stiles, to build and maintain the gardens for decades until they could no longer manage the physical strain of gardening on such a large scale. They wisely chose to leave their cherished garden in the hands of the New England Wild Flower Society, which since 1965 has preserved and built upon their legacy. And, while the Garden has survived, Curtis’s death in 1969 left it lacking the singular vision necessary to ensure that it thrives and continues to adapt both to cultural trends and ecological threats. In 2012, the Society contracted a landscape architecture firm, Andropogon, to help it develop a new vision for Garden in the Woods and to complete the first comprehensive master plan in the Garden’s history. After nearly a year of intense work, the Society plans to unveil the final plan during a public presentation on October 24.

The plan for Garden in the Woods, like most master plans, addresses critical infrastructure issues, like a better designed parking lot and improved visitor amenities. It suggests a more logical trail system that provides greater access to all 45 acres of the site. The plan also provides a vision for building renewable energy systems and a site-wide approach to waste water filtration and rainwater capture for irrigation. However, the most compelling and unique feature of the master plan is not in its approach to the “built landscape” but in its treatment of the uncultivated areas that comprise the majority of the 45 acres. 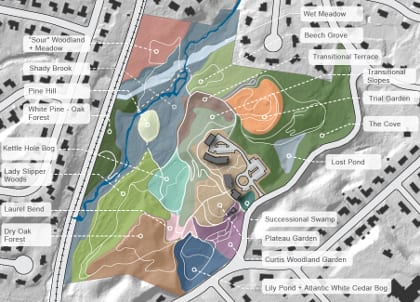 The master plan for Garden in the Woods organizes the property into Landscape Character Zones that describe existing site conditions and recommended plant communities.

Long managed as “natural areas,” with little thought as to how they might best reflect the beauty and ecological significance of New England, the roughly 30 acres of land surrounding the cultivated gardens were deeply analyzed throughout the planning process. The resulting “landscape character zones” define those natural areas and recommend management guidelines and interventions for enhancing and dramatizing the flora of New England and the impressive natural features of this site.

The character zones seek a balance between existing site conditions and the functional needs of the garden in support of the Society’s mission. They define the plant communities the Garden should highlight in order to tell a complete story about the beauty and richness of the cultural and natural New England landscape. The character zones also seek to embed resilience in a landscape facing a myriad of ecological threats, like drastic changes in hydrology and any number of introduced pests and diseases. In essence, the character zones build upon Curtis’s original approach to creating gardens that reflect natural habitats but on a larger scale more akin to an ecological restoration than a diorama. 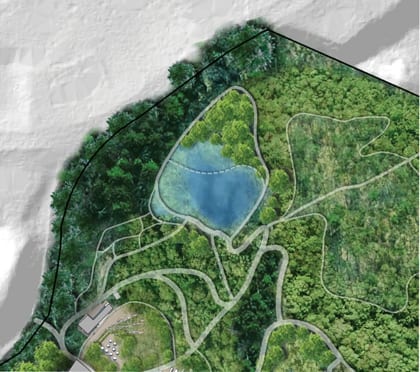 The Atlantic White Cedar Bog proposed for the southeast corner of the Garden will filter water from the Lily Pond and shield sight lines to Hemenway Road.

Development pressure and the resulting changes in hydrology have limited the presence of this plant community across much of New England. From a horticultural perspective, Atlantic white cedar bogs offer four seasons of interest thanks to the evergreen cedar canopy and are quite striking in fall when the foliage of the shrubby understory is a riot of oranges and reds. From an ecological and functional perspective, this plant community will play a critical role at Garden in the Woods by filtering the standing water in our Lily Pond and collecting runoff water from the Woodland Garden. 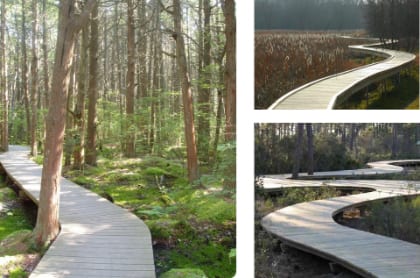 Boardwalks will allow visitors to access the Atlantic White Cedar Bog, proposed for an area of the Garden that is not presently accessible.

Development of each of the remaining eighteen landscape character zones followed the same formulaic approach: What is the existing character of the site? What reference plant communities require the same cultural conditions as exist in a given area? What is the ecological function or significance of that plant community? What is the inherent horticultural beauty or appeal of that plant community? What management strategies are necessary both to build and maintain the proposed character zone? Definition of the character zones provides the ecological framework for the horticultural decisions to come as the Society completes more detailed design work and implements the master plan in phases over the ensuing decades.

The Society’s hope is that the master plan will launch a renaissance of Garden in the Woods that blends Curtis’s original vision for the garden as “a peaceful picture of our land as nature intended it” with modern sustainable design. The planning process, led by a landscape architecture firm whose guiding principle is “designing with nature,” reflects a careful and measured approach. The resulting plan reflects our conservation ethos by embracing and guiding change in a manner that is both naturally beautiful and ecologically functional.

Mark Richardson is Director of Horticulture for New England Wild Flower Society, where he oversees the Society’s botanical garden, Garden in the Woods, and its native plant nursery operation, Nasami Farm. He studied ornamental horticulture at University of Rhode Island while helping to run a mid-size ornamental plant nursery before finding his true passion in public horticulture. Mark led undergraduate programs at Longwood Gardens, where he directed a curriculum overhaul of the Professional Gardener Program, and adult education at Brookside Gardens. He holds a master’s degree from the University of Delaware’s Longwood Graduate Program. You may contact Mark at mrichardson@newenglandwild.org.