By Maureen Sundberg on September 15, 2015 in Plant Science, Restoration

Using phytotechnologies to clean up contaminated soils and groundwater

So, you’ve had the soil tested and it’s not good news. Can plants help remediate your site’s contaminants? Cost-effective phytotechnology (phytoremediation) plantings can be effective in mitigating on-site pollutants, but these interactions are complicated, sometimes taking decades for remediation, and many times plant-based remediation strategies are not a good fit for environmental cleanup. When do they work and when don’t they? There is a lot of confusion around what phytotechnology can and cannot accomplish. However, with careful research and planning, integrating this relatively new technology into design work can result in huge financial and environmental benefits.

Phytotechnology is the use of vegetation and their associated microbes to remediate, contain, or prevent contaminants in soils, sediments, and groundwater. The term ‘phytoremediation,’ where plants are used to remediate sites that are already polluted, is often used interchangeably with ‘phytotechnology,’ but is only one subset of the field. ‘Phytotechnology’ is a much broader term that includes techniques such as pre-emptive installation of vegetation to mitigate ecological problems before they actually occur, as well as stabilization of pollutants on site, beyond just contaminant removal. Green roofs, constructed wetlands, bioswales, bioenergy crop cultivation, and phytoremediation plantings are all forms of ‘phytotechnology,’ a term which encompasses all uses of plants to meet environmental and technological goals.

History of the Field

The field of phytotechnology in the U.S. was named and formally established in the 1980s. In the 1990s a large number of phytotechnology greenhouse and lab experiments were published, showing a potential for plant based clean-up approaches to a broad range of pollutants in groundwater and soils across many site contexts. Quite a few plants found to ‘hyperaccumulate’ metals were discovered during the same time period, and speculation arose that these plants could be grown and then harvested to remove metals from contaminated sites. (White and Newman, 2011) Field sites were planted, and the performance for metals remediation was mixed; failures outnumbered successes mostly because implementation occurred before the science was substantiated in the laboratory. (White and Newman, 2011) For example, uptake and remediation of lead by sunflowers was hailed as an exemplary remediation tool without the biology and mechanisms being fully understood. When actually applied on contaminated sites, it was found that many metals remediation plantings were unsuccessful when applied at field scale. In the late 1990s and 2000s, the credibility of the field was seriously questioned, and confusion about what is possible still exists today.

However, while many metals remediation projects were failing to perform in the research projects of the 1990s, many phytotechnology projects to mitigate organic contaminants such as fuel and solvent spills were having significant success. Poplars were being successfully used to stop plumes of dry cleaning solvents, and trees were planted in buffers to mitigate gas and oil spills at stations and refineries. Plants were also playing a role in filtering pollutants from stormwater in bioswales and constructed wetlands. So where does the science stand now?

The Basics: Organics vs Inorganics and in Soil, Water or Air?

The first two steps in deciding if phytotechnology systems may be applicable for contaminants at a given site is to 1) identify which of two categories the targeted pollutant falls into, either organic or inorganic and then further identify the exact contaminant and 2) identify where the pollutant exists, in soil, air or water, and at what depth? Phytotechnology treatment techniques are incredibly contaminant and media specific and ALWAYS require the assistance of a phytotechnology specialist. A broad overview is provided below to develop an understanding of opportunities to consider when phytotechnology could be considered for a particular project.

Organic pollutants are mostly man-made compounds that contaminate sites from fuel and solvent spills, explosives, and agricultural pesticide and herbicide use. (Pilon Smits, 2005) Since these pollutants are various compounds of oxygen, carbon and nitrogen, if phytotechnology is an applicable solution, many can be degraded, breaking them down into smaller, less toxic components that plants and microorganisms can process. (ITRC, 2009) Phytotechnology systems for the treatment of organics can be an ideal remediation option, where the pollutant is degraded and disappears, and there is no need to harvest the plants.

Inorganic pollutants are naturally occurring elements on the periodic table, such as metals including lead and arsenic. Human activities such as burning of fossil fuels, industrial production and extraction mining create releases of inorganic pollutants into the environment, causing toxicity. These pollutants are elements, so they cannot be degraded and destroyed; however, in some instances, they can be taken up and extracted by plants. (ITRC, 2009) However, in general, (despite what you may have read on the internet about metals!), phytoextraction of inorganic contaminants on sites is quite difficult and usually not worthwhile to attempt. (Rock 2013) If extraction is possible, the plants must be cut down and harvested to remove the pollutant from a site. (Chaney et al 2010) Instead of extraction and removal, plants and their associated microbes may be used to stabilize or change the state of an inorganic contaminant to reduce exposure risk and danger to humans and the environment. Interestingly, sunflowers used for lead remediation continue to appear on the internet and in landscape architecture publications as a phytoremediation solution, even though this practice essentially failed in field trials in the late 1990s. (Ulam, 2013) There is a lot of outdated science out there that we landscape architects must be careful not to misinterpret and apply and should instead team with knowledgeable phytotechnology scientists.

For pollutants found in soils, plant-based treatment technologies have been best utilized for the treatment of organic contaminants and nitrogen. (Dickinson et al 2009) Inorganic contaminant phytoremediation for removal of pollutants from a site (other than nitrogen) has been less successful. This generalization refers to soil-based contamination and does not apply to remediation of pollutants within water, since inorganics in water can often be filtered out by various types of soil and plant interactions and held within the soil matrix. (Kadlec and Wallace, 2009)

Phytotechnologies could play a larger role in landscape design practice and in transforming brownfields to developable parcels providing a more sustainable choice for land planning. Twenty percent (20%) of all real estate transfers in the United States are brownfield sites, (Sattler et al, 2010) with the current value of these lands in 2010 in the range of two trillion U.S. Dollars. More than 16% of global land areas, equivalent to about 52 million hectares, are impacted by soil pollution worldwide. (Anjum, 2014) The majority of traditional remediation techniques are expensive and energy intensive in their approach to quickly correct an environmental problem that was decades in the making. Plant-based cleanup methods can be as little as 3% of the cost of traditional cleanup costs (Glass, 1999) however may take ten years or more (even decades!) to reach cleanup goals. If phytotechnology timeframes can be integrated into long-term planning projects, however, land redevelopment could move beyond conventional, high-cost, single outcome remediation practices that have limited site design potential beyond treatment.

A significant opportunity exists for landscape architects to integrate principles of phytotechnology for soils and groundwater into daily design practice. As our profession has aptly done with stormwater filtration, water cleansing, and water recycling, we can integrate the latest science into projects, knowing when to invite experts to a team. A project with Massachusetts Department of Transportation (MassDOT) provides an example. 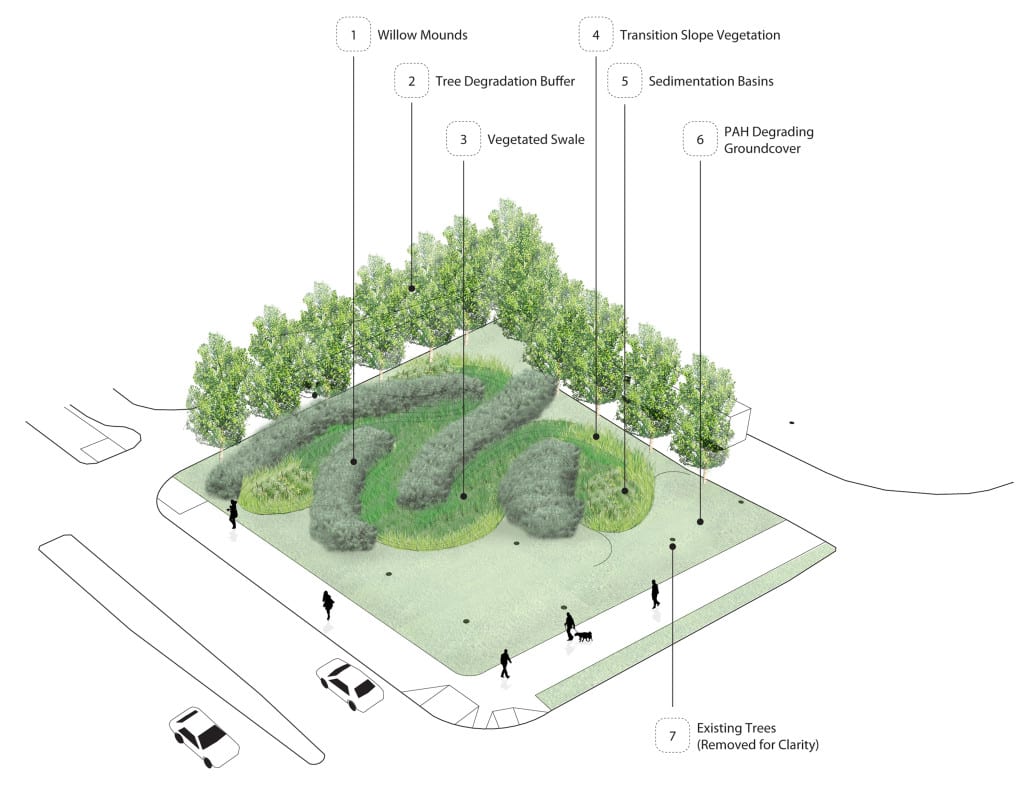 MassDOT has taken an important step forward in controlling contaminants entering into the Charles River Watershed from adjacent roadways and bridges. Vegetated swales, constructed wetlands, and other stormwater controls are being added as critical landscape components of planned roadway and bridge design projects. However, what can be done when the stormwater mitigation site selected was formerly a gas station or manufactured gas production site with heavy petroleum contamination?

At the River Street and Western Ave Bridge projects along the Charles River in Boston, MA, two stormwater sites selected are impacted with PAHs (Polycyclic Aromatic Hydrocarbons – a difficult-to-break-down subset of petroleum products) associated with these former uses. Typically, a client would just bury this contamination, cap it, put a use limitation on the site and wipe hands clean of the project. MassDOT instead asked if there was any way to slowly clean up the soils while treating stormwater runoff at the same time.

Offshoots, Sand Creek Consultants, and ECT, Inc. devised a strategy using contrasting willow, cottonwood, and deep rooted grass species to mound and treat the existing soils on site over time, while creating a series of natural water cleansing systems (sedimentation ponds, vegetated swales, and retention basins) to weave new stormwater through the site and remove excessive levels of phosphorus and nitrogen. The result? A ’background’ landscape at a highway interchange that will not only filter stormwater but will rehabilitate a former brownfield and bring it back into productive use.

Potential contaminants can be anticipated by site program and landscape systems can be designed to intercept contamination events before they occur. The following illustrations showing site program renderings are a from forthcoming book by Kate Kennen and Niall Kirkwood, PHYTO: Principles and Resources for Site Remediation and Landscape Design (to be published 2015). 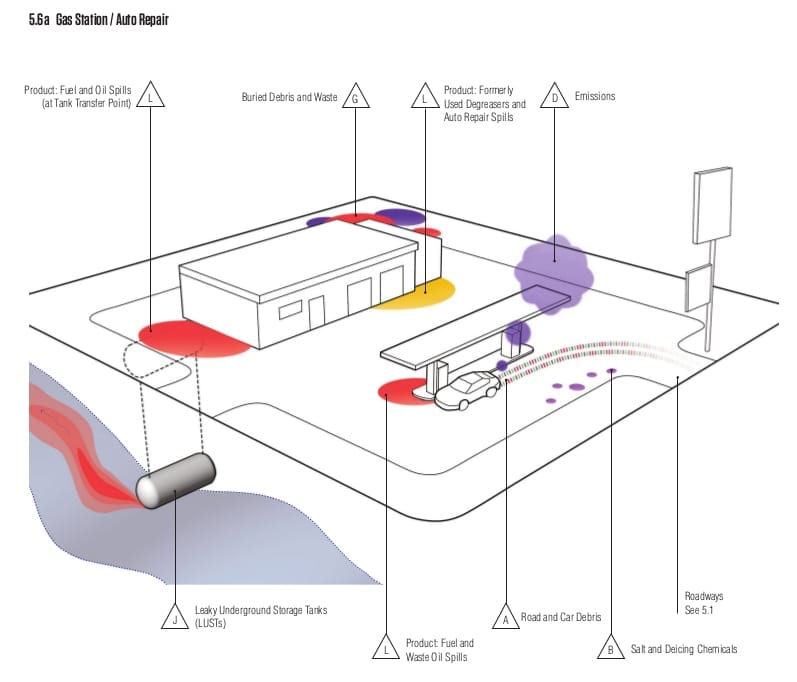 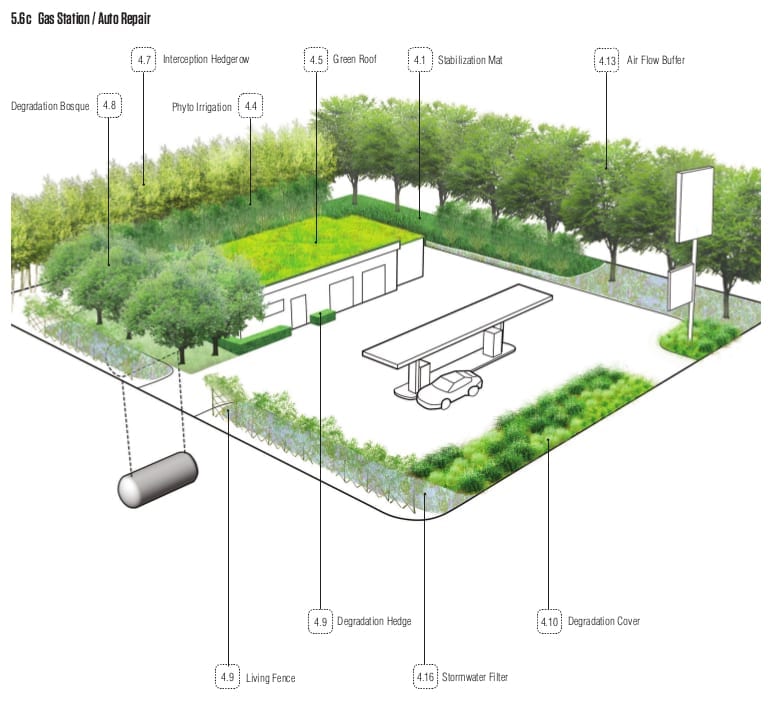 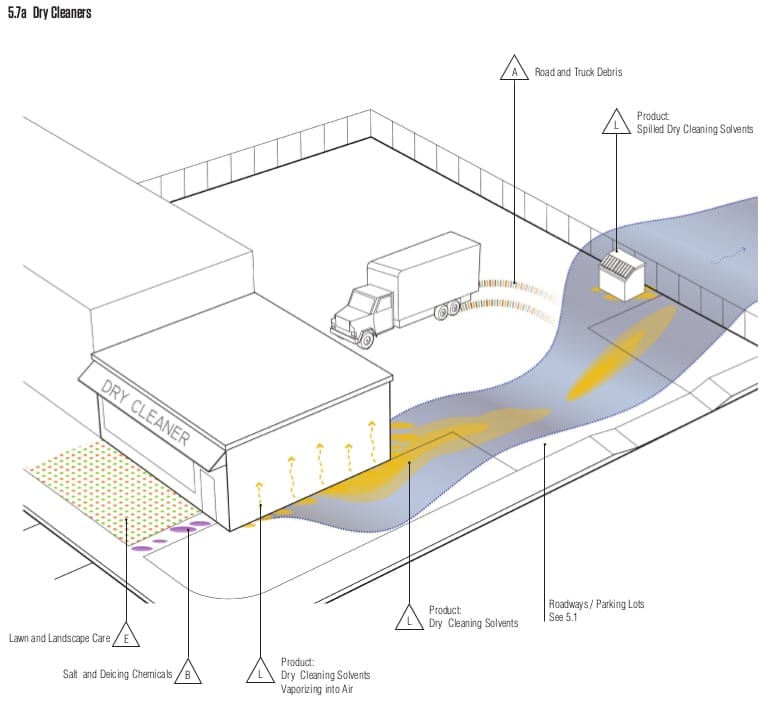 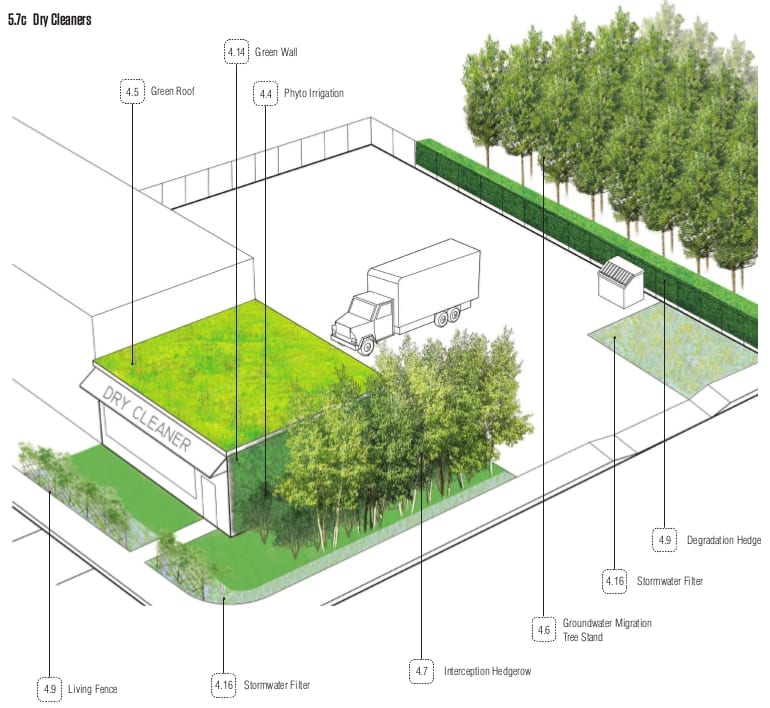 In conclusion, the future of phytotechnology is continually evolving, and there is considerable opportunity for integration with the field of Landscape Architecture. Designers must work in collaboration with phytotechnologists to identify synergies and select appropriate plants to be used in projects that recognize the need for time on a plant scale. Ultimately, the success of phytotechnology systems will depend on our ability as designers to plan beyond the short term and work hand in hand with a multi-disciplinary team to integrate this ever-evolving field.

Kate Kennen, owner of Offshoots, Inc. has been conducting intensive research in the phytotechnology field since 2006. With Niall Kirkwood, she co-authored PHYTO: Principles and Resources for Site Remediation and Landscape Design, which will be published by Routledge in 2015 and teaches a research seminar with Niall in ‘Phytotechnologies for Landscape Design’ at the Harvard GSD.

Offshoots, Inc. specializes in translating the often cryptic science of phytotechnolgies to designers, and utilizes these technologies in constructed landscapes to create sustainable solutions for land planning and site cleanup. Offshoots provides consulting services to other landscape architects and planners to integrate phytotechnology concepts into their designed works. In addition, Offshoots also engages in full design commissions to create public and private landscapes utilizing plant based cleanup.