By i.am.georgia.harris on August 16, 2021 in Designing Ecological Landscapes, Meadows, Resources

The following interview is adapted from the Vegetable Garden Blog and reprinted with permission from John and Walter Kittredge.

What new skills or activities did you try during COVID lockdown? Walter Kittredge began an entirely new venture after retiring from his 45-year career as a taxonomist at the world-renowned Gray Herbarium at Harvard University. He opened a native plant nursery called Oakhaven Sanctuary. As a 1975 graduate from the University of Maine with a B.S. degree in botany, Walter now focuses his expertise to support the growing interest in native plants.

Read along as New Hampshire Garden blogger John Kittredge interviews his brother about this new adventure.

(John) You have come to the end of your forty-five years at the Gray Herbarium, and you retired. But you are not ready to kick back.

(Walter) During the pandemic year, while I was at home working online, I had extra time, not having to commute to work. I used that time to pot up a lot of the perennial plants that grow on our property and the surrounding area. In doing so, I built up an inventory of over a thousand plants which I intended to use to start up a nursery.

(John) Tell me about how you came to think of starting a nursery.

(Walter) It started with the Native Plants of New England Facebook page, where people would write that they wanted to grow a particular plant, but they couldn’t find it in a nursery. So I thought I could be that person who provides native plants for people to grow. Also, as a field botanist, I know where there are populations from which I could draw. I did a lot of plant rescues from road and building construction.

(John) Many people would say that you have a passion for native plants. 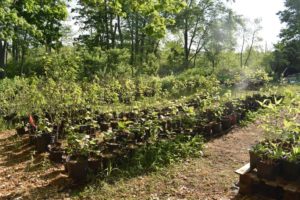 (Walter) It has been a developing passion. I trained as a standard horticulturist in college and have gardened in the standard fashion all of my life with the standard offerings available in nurseries. But as an ecologist, I have become aware of climate change and its effect on the environment. I have done research about that. We conducted research at the Middlesex Fells Reservation. Its flora was documented when it was first set aside for conservation in 1894. Recently we were able to collect the plant specimens again to compare the changes over time. One of our observations was an increase in non-native plants. On top of that is the news of the decline of native insect populations. So all of this converged into my growing realization that we need to do more to bring native plants back into our landscapes.

(John) Back into our landscapes?

(Walter) When people started to do landscaping, such as Warren Manning, who was a protege of Frederick Law Olmsted, they did a lot with native plants. Manning was a botanist and a very good one. It was common back then for them to do natural landscaping. They tried to make the landscape look as natural as you might see anywhere in the wild. But of course, it was entirely artificial. The Arnold Arboretum is designed very much along these lines. They tried to make it look as natural as possible while planting the entire world’s temperate flora. 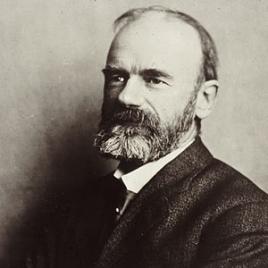 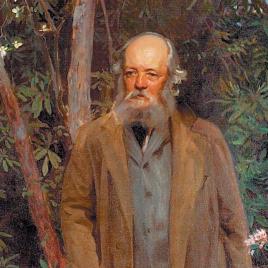 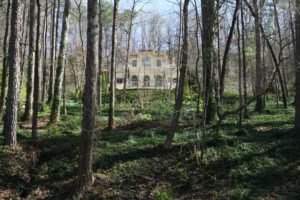 A wild garden design. Warren Henry Manning was an American landscape designer and promoter of the informal and naturalistic “wild garden” approach to garden design. In his designs, Manning emphasized pre-existing flora through a process of selective pruning to create a “spatial structure and character.”

(John) Which is anything but natural.

(Walter) Yes. At some point in time, the nursery trade dropped native plants in favor of non-native plants. The reasons are probably very simple. One is that they are generally very tough yet easy to grow in many situations. Also, they don’t have many diseases or insect problems because they are from other parts of the world, and they left those problems behind. The problem is that since no native insects feed on them, then they don’t provide food for other wildlife.

(John) So by going to native plants, you are helping the native insect population.

(Walter) The idea is to work towards an ecological balance. This is a broader concept of trying to pull the native plants back into our consciences as something that is part of our lives. In doing so, we can enrich all of nature. Then we will have a healthier environment to live in. Hopefully, we can begin to reverse the declines in native plants we have seen.

(John) So your big effort now is that you have opened up your native plant nursery called Oakhaven Sanctuary in North Reading, Mass. How many plants do you have potted up?

(Walter) I have three to four thousand native plants potted. This includes herbaceous perennials, ferns, shrubs, and trees. This year I have started growing natives from seed. This requires winter stratification, where the seed is sown in the fall and left outside for the freezing and thawing cycles. They then germinate in the spring. I am growing plants in plug trays for volume. There are others who are doing this too, so we can get together and trade excess seedlings to collaborate on having different kinds of plants.

(John) In the American model, it is all competition but what you are doing is collaborating with your competitors, right?

(Walter) Well, one difference is that the people I am collaborating with are also doing consulting for ecological restorations. This is different from garden nurseries. Restorations require a large number of plants. The stormwater restoration that was done at the Alewife Brook Reservation in Cambridge required one hundred thousand plants. These are sold as plugs which come at a lower price so you can do a large volume and a large landscape as opposed to somebody’s yard.

(John) Are regular plant nurseries becoming interested in this market?

(Walter) Yes. This year the Mass. Department of Conservation and Recreation has started a new program for pollinator gardens. They oversee over a hundred state parks in Mass. So nurseries are going to provide pollinator starter kits. I don’t know what will be in them, but often plants that are native to the Midwest or from down south and are not native to New England are sold as natives.

On top of that, some are selling nativars. That is a native plant that has been cultivated for a special attribute such as color or size. There has been research showing that cultivars may not be as effective for our native pollinators. The idea in horticulture is to produce something new and improved so you can sell more at a higher price. The economics is moving the cultivars while the native plant movement is focused on the ecology. 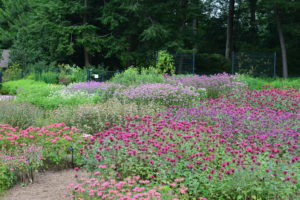 (John) Well, this has been a very interesting and educational conversation. I think I would like to continue this conversation at another time, but I understand that you have to run off to sell some native plants at Oakhaven Sanctuary.

(Walter) That’s right. I have customers.

(John) Thank you so much for doing this interview. I will be posting this in my blog for others to read. I hope people will respond to what you have said.

(Walter) It was my pleasure. I hope your readers enjoy it.

John Kittredge received his BS in Biology University of Maine in Orono. He went on to get an MA in Education at  Suffolk University. He spent 34 years as a New Hampshire high school biological sciences teacher then seven years as a Science Coordinator for the Chelmsford, MA Public Schools. He started his Gardening blog in 2019 and, in 2021, completed the UNH Cooperative Extension Master Gardener certification. John has been a lifelong gardener since he was old enough to pull weeds in his parent’s garden.