Throughout my career working with people, plants, and landscapes, I have often been puzzled by the lack of interest in certain plants that I personally find exceptionally useful. These plants bridge the gap that sometimes exists between what humans want and what wildlife needs. Below are three of my favorites 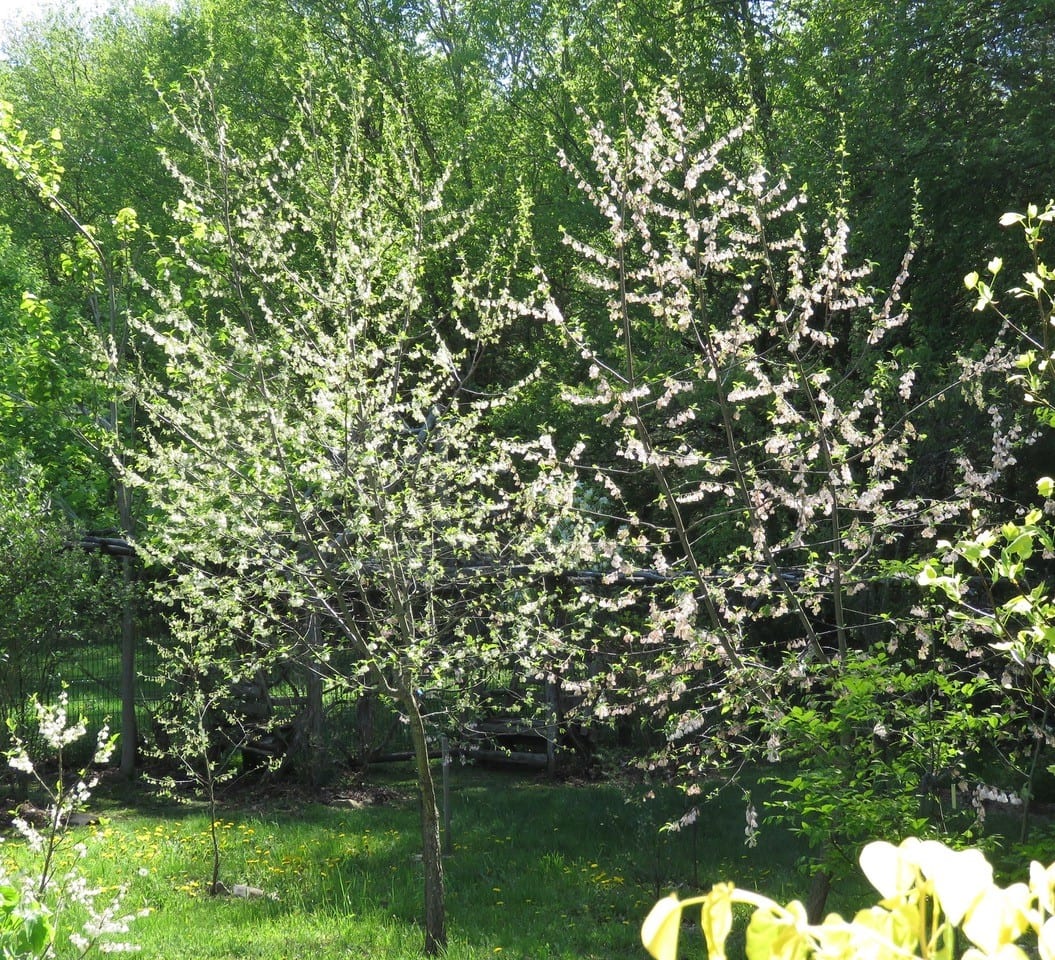 About the time the glistening white blossoms of the native plums (Prunus spp.) and shadbushes (Amelanchier spp.) are fading, along comes a second flush of eye candy. In New York’s Catskill Mountains, where I garden, flowering dogwoods bloom in mid-May, along with the Carolina silverbells, well-named for their silvery-white bell-shaped flowers. These are not tiny bells, but bells large enough to fully engulf bumblebees, and they make quite a stunning display in the landscape. There are also lovely pink varieties. Yes, these small understory trees are southerners but rated to Zone 4, and my personal experience with the trees in upstate New York certainly proves the point.

Halesia also provides benefits for many of our local butterflies, as it serves as a host plant for Eastern tiger swallowtail, mourning cloak, Eastern comma, red-spotted purple, and viceroy. In addition to the aforementioned bees, hummingbirds also enjoy the nectar. Buds and flower clusters are eaten by birds.
Natural understory trees, silverbells are quite adaptable as to the amount of sun they need, but as with most flowering plants, the more sun you provide, the more flowers you will receive. The corollary to that rule is that the more sun your plants are exposed to, the more water they may need, especially during the establishment phase. Silverbells are not considered drought tolerant. 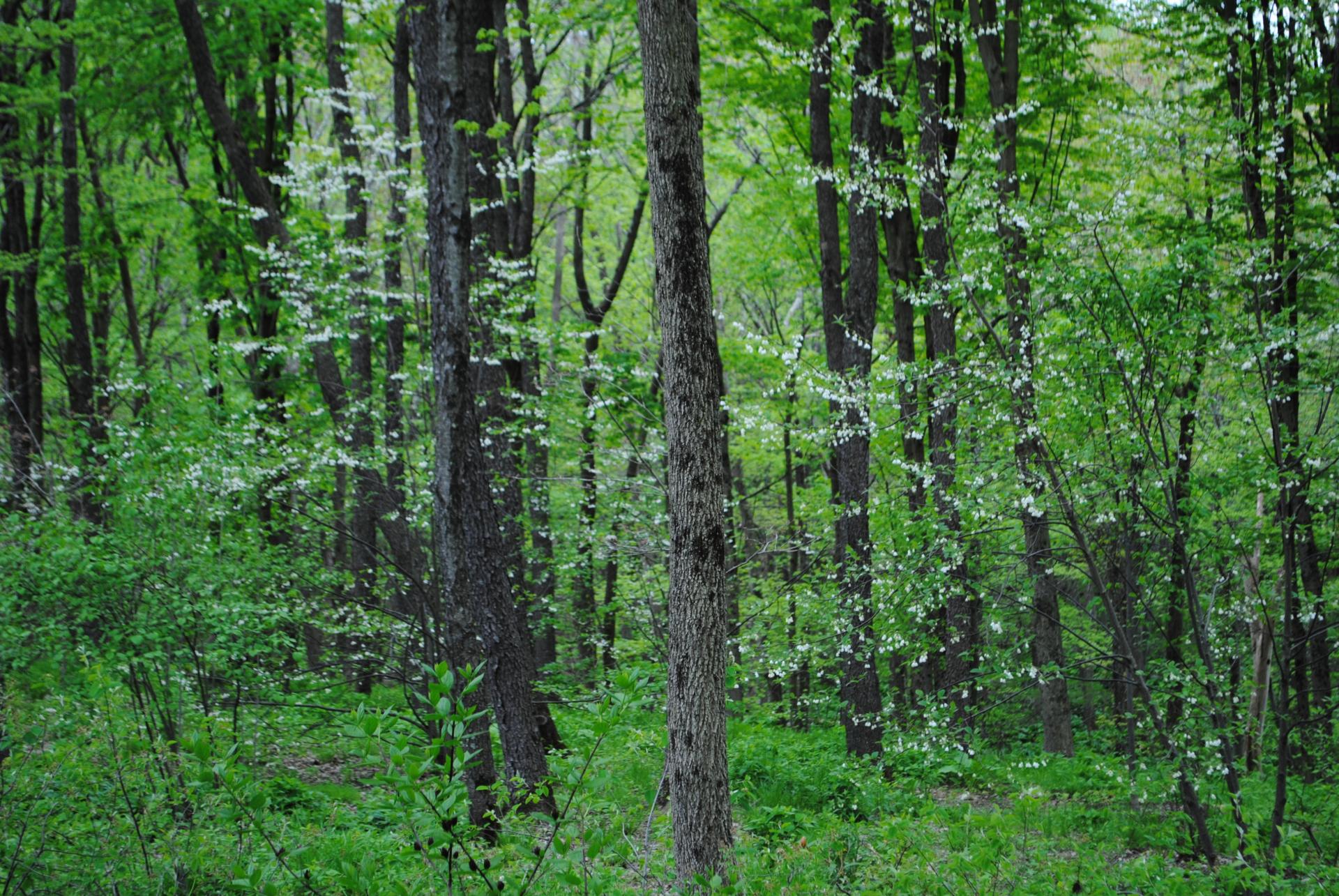 An understory of Carolina silverbells succeeds in establishing them in a close approximation of their natural habitat. 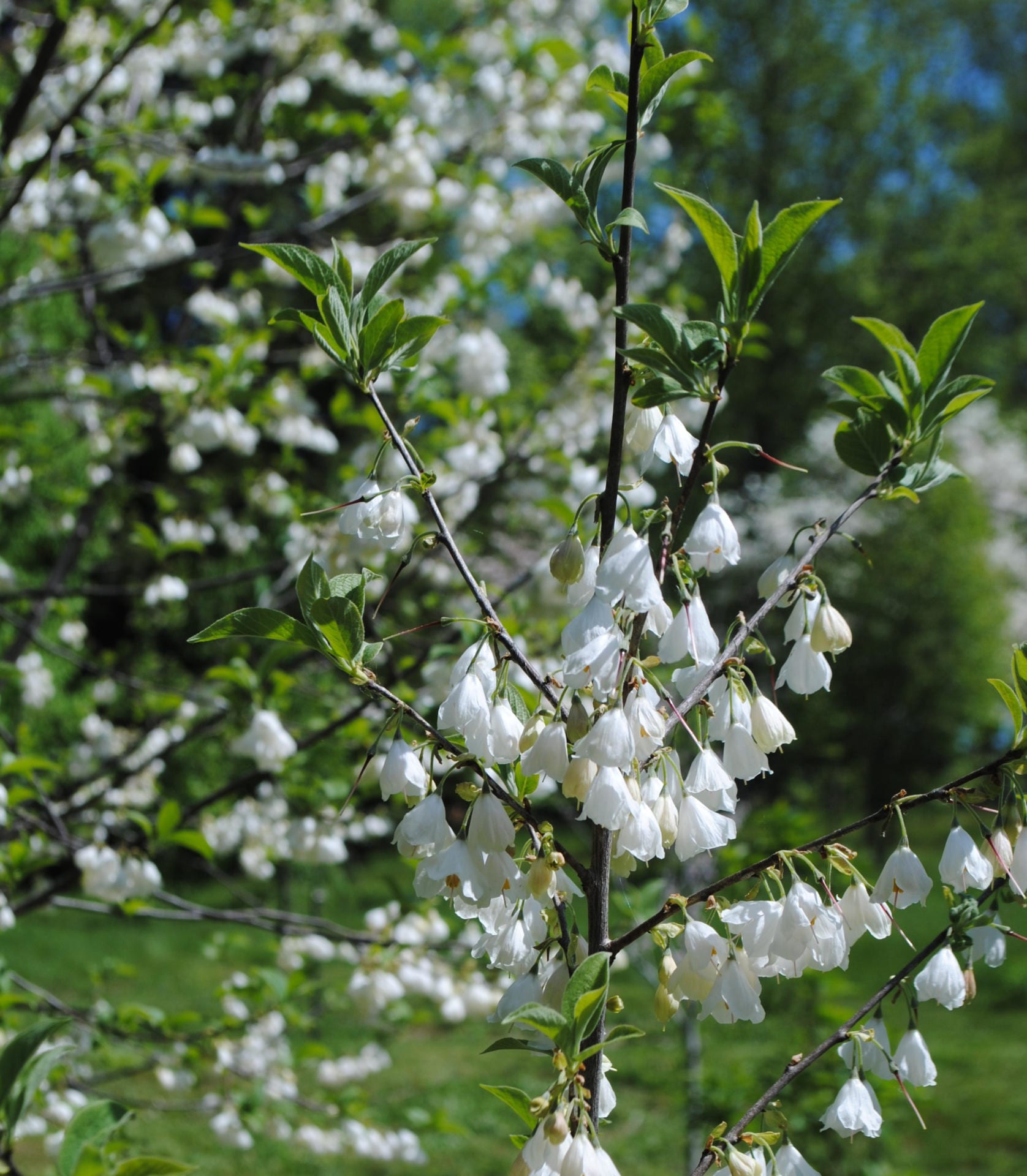 Blooms hang down like so many lovely earrings on Carolina silverbell.

The rough bark has attractive streaks and becomes gracefully furrowed with age, revealing orange bark underneath. Interesting winged seedpods appear in autumn and persist through winter. While my observations may not be universally true, the silverbells I’ve seen and photographed have all had an interesting tendency for the branches, rather than reaching out horizontally, to arch upward with the bells suspended below like so many earrings in a jewelry store.  This lovely tree has so much to offer, and I continue to be mystified that it is not more widely used. 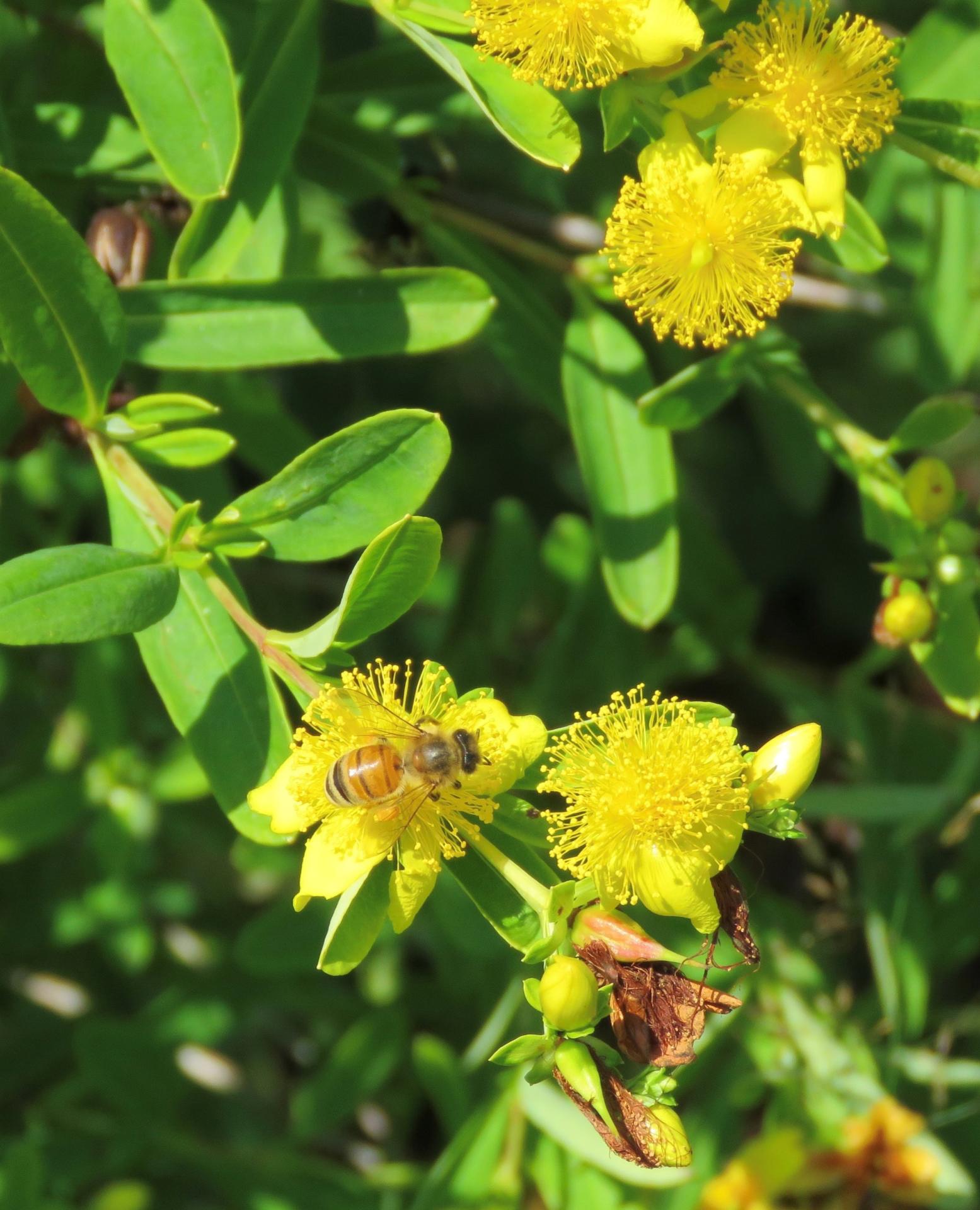 After the riotous beauty of spring, early summer can sometimes seem a bit bereft of bloom. This is the time when the golden St. John’s wort shrubs literally shine. Ok, I guess I’m cheating a bit here because instead of one plant, I’m going to recommend a whole suite of plants. For those more familiar with perennials in the St. John’s wort family, it can be surprising to learn that there are four shrubs in the genus Hypericum native to the eastern US: H. densiflorum, H. frondosum, H. kalmianum, and H. prolificum. Virtually identical to the non-botanist, all four of these shrubs make excellent garden subjects, with kalmianum and prolificum displaying the best cold hardiness. The flowers of H. prolificum are slightly smaller than H. kalmianum, and H. frondosum, but make up for that with a profusion of flowers, hence the specific epithet prolificum.

All of the shrub Hypericum spp. are drought-tolerant and adaptable to a wide range of soil and light conditions, they are low-growing with a neat mounded shape that rarely needs pruning, their aging lower stems display colorful shredding bark, and, perhaps best of all, they are slightly toxic to grazing mammals and therefore highly deer resistant. I have seen them used (though not often enough) in tough commercial zones such as parking lots and sidewalk strips, where they flower profusely. 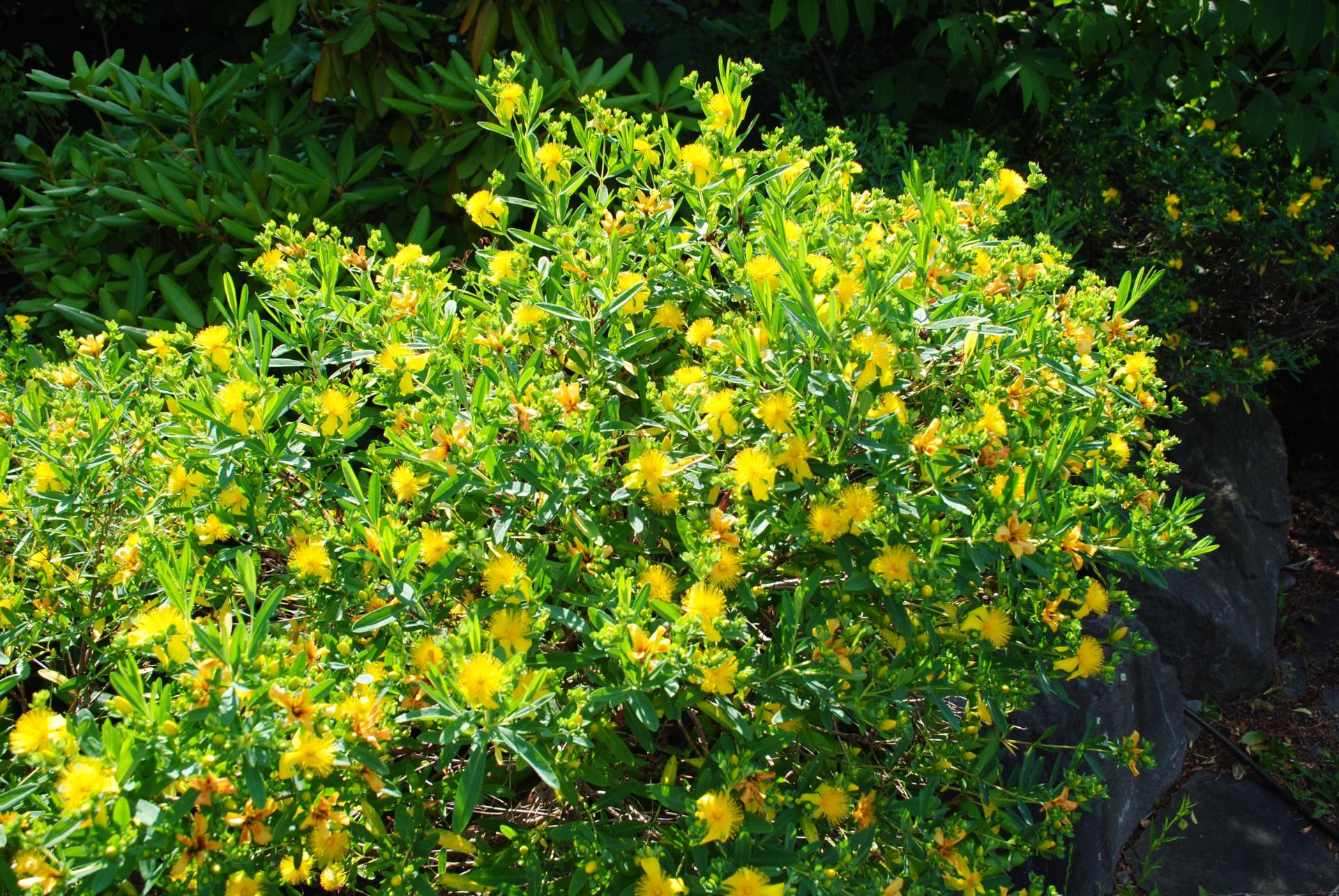 Midsummer finds the shrubs covered with masses of 1-2-inch golden pompoms, which in turn are often covered by bees gathering pollen. The flowers produce a rounded mass of lengthy stamens that effectively outshine and cover the petals underneath, thus producing the pretty pompom effect. Aside from their sheer beauty, the number of bees that are attracted to the blossoms is just amazing; sometimes the whole bush appears to be buzzing. And these are plants with no nectar, just pollen. The small, simple leaves often display a lovely blue-green color. They are also host plants for the gray hairstreak butterfly and some of our moths. 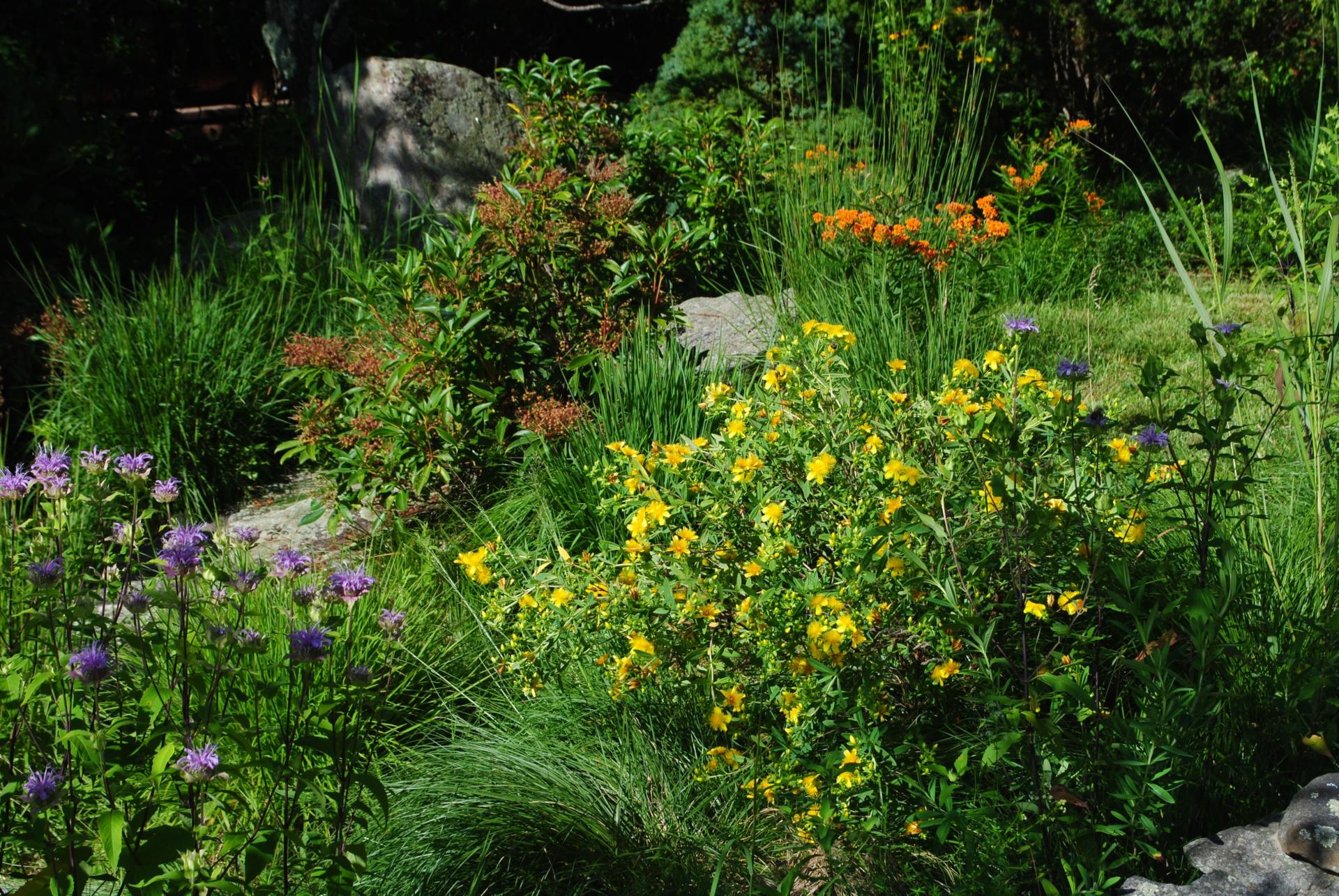 Hypericum prolificum mixes well with grasses and other perennials.

Fortunately for gardeners, the nursery industry seems to be catching on to the value of these shrubs, which are rapidly becoming more widely available. In a recent search, I noted that three cultivars of Kalm’s St. John’s wort (H. kalmianum) were available, in addition to the more common Golden St. John’s wort (H. frondosum) cultivar known as ‘Sunburst,’ which has been available for the last few years. A word of caution, however: Accept no substitutes!  The common exotic shrub, Hypericum ‘Hidcote,’ has been commonly sold in nurseries for several years. It advertises larger flowers because the petals are so much larger than the stamens, completely losing the pompom effect. More importantly, as far as I can tell from limited observation, they do not seem to offer much in the way of pollen. In our garden, all of the native species and their cultivars have been tried and proven true, and I encourage gardeners to find a special place for their golden midsummer blooms. 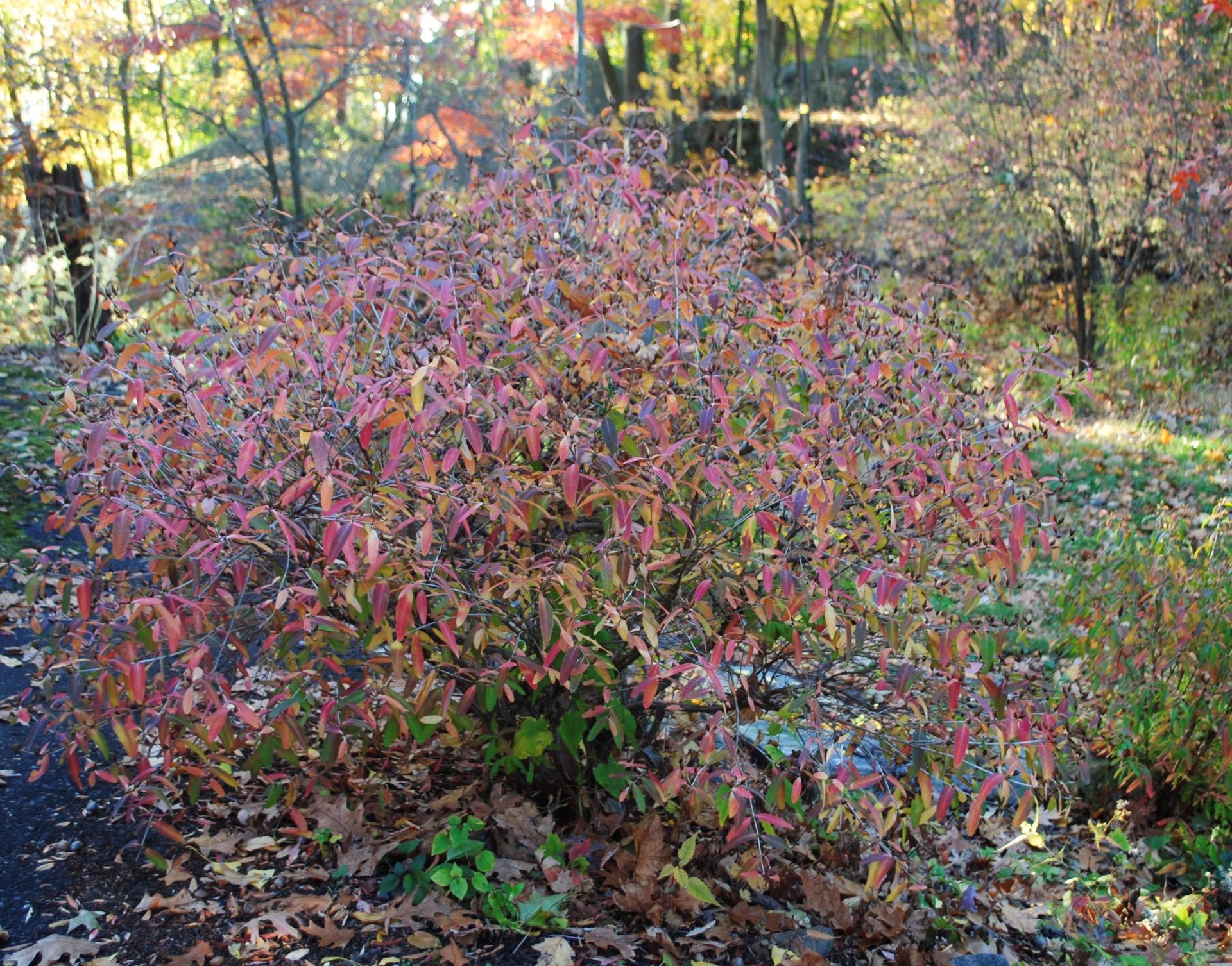 Hypericum prolificum mixes well with grasses and other perennials.

Unlike my long-term relationship with the previous species I discussed, Bradbury’s beebalm is a relatively new find for me. It joins two of my favorites: Monarda fistulosa and M. punctata as my “dry land” monardas. Now there are three! It’s hard to beat the color of Monarda x ‘Raspberry Wine,’ but like the other M. didyma derivations, it spreads rapidly and competitively and requires sustained moisture to look its best. 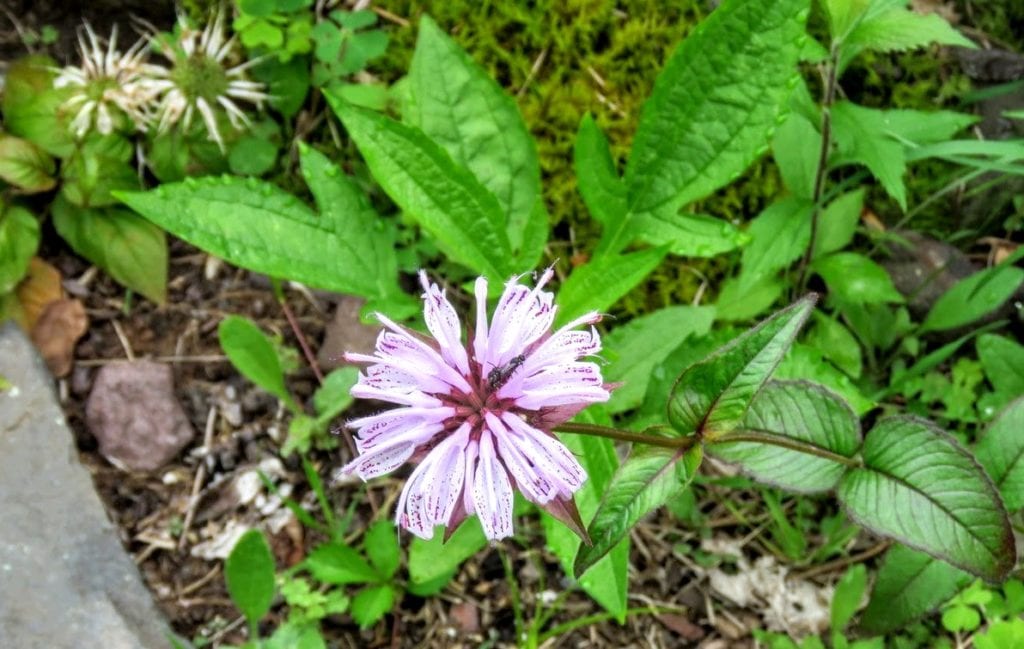 Now I’m adding Bradbury’s beebalm to the same dry sites (sandy, well-drained soil, full sun) where wild bergamot does well. Bradbury’s beebalm is shorter, with pale pink flowers that have darker centers and sepals, which can produce an interesting bicolor effect. Leaves of both species are similar. In fact, if I didn’t know better, I would assume some enterprising plant breeder had produced a dwarf, bicolored wild bergamot. 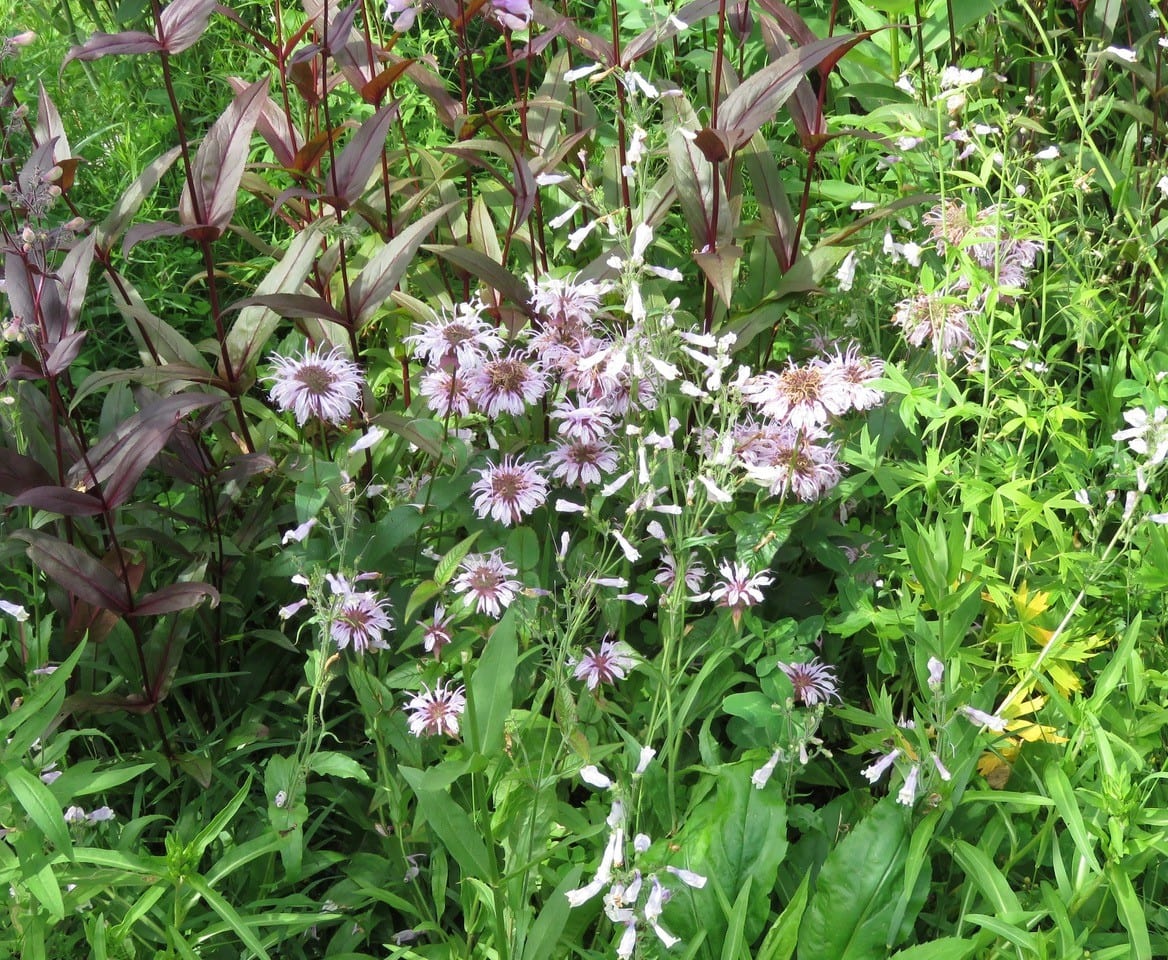 Monarda in the company of Pentsemen makes an attractive combination.

Bradbury’s beebalm blooms earlier than the wild bergamot, extending the season when I can walk out my front door and hear the bees buzzing. Cutting off the spent flowers has been shown to encourage repeat bloom, but since my bergamot takes over the nectar production duties, I haven’t bothered. According to Mount Cuba’s report, this beebalm is also prone to flopping, so a haircut after flowering might help with that. Since I’m hoping it will self-sow and spread, I don’t worry about floppiness. Then again, I have it planted with other companion plants. Maybe it just wants a little company to help it stand up straight. Its naturally shorter stature can be an asset, as it mixes with, and never overpowers, other perennials. I have found Bradbury’s beebalm to be good company for me and for the bees. If your sunny garden has well-drained soil, I recommend giving Monarda bradburiana a try.

Carolyn Summers is the author of Designing Gardens with Flora of the American East. After completing her BSLA (Landscape Architecture) at CCNY, she began an atypical career with the Trust for Public Land, producing the Harbor Herons Project that guided an urban wildlife refuge on Staten Island. Carolyn continued environmental work with New York City’s Department of Environmental Protection as the agency’s first Director of Natural Resources, continuing work on restoration projects. Carolyn is currently an adjunct professor for Go Native U, a joint project of Westchester Community College’s Continuing Ed Program and The Native Plant Center (based at Westchester Community College). Most recently, she and her husband have opened their country home, Flying Trillium Gardens and Preserve to public tours. By sharing the beauty of native plants in both garden and natural settings, Carolyn hopes to inspire designers, gardeners, and homeowners to expand the use of native plants in their own projects.