by Daniel Atha and Brian Boom

The New York Botanical Garden is documenting the flora of New York City using all available tools, including traditional botanical techniques, modern technology, and broad community participation. The goal of the project is to document the spontaneous flora of New York City, enhance botanical and ecological understanding, and conserve the native biodiversity.

With approximately 8.6 million inhabitants, New York City (784 km2) is the most populous city in North America. In the minds of most people, New Yorkers included, New York City is the quintessential urban area – the Concrete Jungle. But what most people don’t know – including many New Yorkers – is that more than 40 percent of New York City is open space, comprising parks, gardens, cemeteries, parkways and campuses (Pregitzer, 2018).

New York City retains a robust flora and fauna and some well-preserved ecological communities – mostly in Staten Island and the Bronx. Beavers disappeared from New York City centuries ago, but they have returned to the Bronx River. Coyotes are regularly spotted throughout the City – even in Central Park. Lichens, which are highly sensitive to air pollution, were nearly extirpated entirely from New York City (and many other cities), and now number over 100 species locally. A species of Bearded Lichen (genus Usnea) was found in the City for the first time in almost 200 years (Dorey, 2019).

Using All the Tools

The New York City EcoFlora Project uses traditional botanical techniques such as the collection and examination of preserved botanical specimens housed in the William and Lynda Steere Herbarium at The New York Botanical Garden as well as other herbaria. These specimens form the foundation upon which to assess the flora as it continues to change through time, providing documentary evidence of our findings that can be reviewed and analyzed by current and future generations. We continue to collect herbarium specimens of new location records, rare species occurrences and as vouchers for DNA analysis as staff and resources allow. 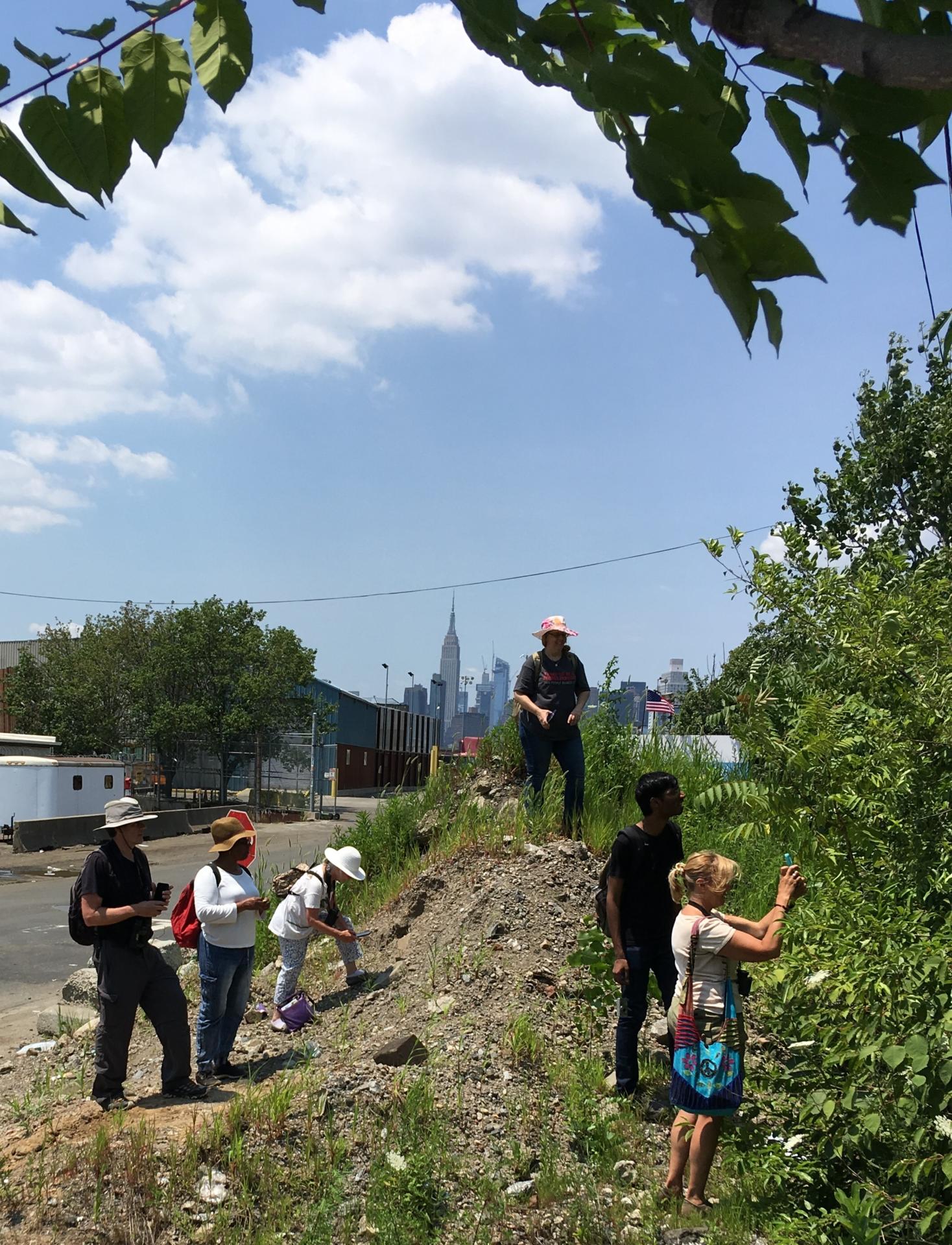 Thanks to the marvels of mobile computing (especially smartphones) it is now possible for anyone walking the streets of the City to document the abundance and diversity of the flora with unprecedented precision and efficiency. While not a substitute for preserved specimens, photographs of plants and animals can be automatically time and location stamped, permitting cost-effective and extremely accurate archiving, indexing and mapping of occurrences. Is it desirable or even feasible to have 10,000 herbarium specimens of one plant species from New York City? Probably not. But by utilizing photographs and GPS technology, we can document the abundance and distribution of a species with great detail, approaching a precise picture of a species’ distribution across the landscape.

The EcoFlora Project offers two benefits to the botanical community. Photo data collected by the project’s citizen scientists augments the work of professional botanists, who are in short supply. And participants in the project acquire knowledge about plants. A general lack of natural history knowledge has received considerable press recently (Belkin 2018). It has been called “plant blindness” and is actually a lack of knowledge rather than a lack of visual acuity. We may see and appreciate plants, but most of us don’t know what we are looking at. To some,  an invasive may look the same as a rare native species. The EcoFlora seeks to inform the community about the diversity of plants and animals, while facilitating documentation and promoting conservation.

NYBG encourages EcoFlora participants to harness the power of iNaturalist by engaging them in targeted projects. To reach a broader audience and engage nature lovers throughout the year, we promote EcoQuest Challenges. The month-long Challenges focus on a single plant species, genus or family and their ecological partners. Equipped with a basic overview of the subject, residents and visitors are encouraged to explore the City. When they find the organism(s), they then photograph them and upload the observation to iNaturalist. 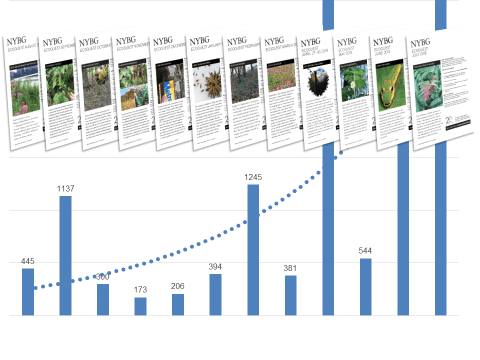 Previous EcoQuest Challenges have focused on ash trees threatened by the emerald ash borer, pokeweed and possible fruit dispersers, milkweed plants and monarch butterflies, the Lauraceae family and its essential importance to the spicebush swallowtail butterfly, and many others. To date, nearly 1,000 New Yorkers have made over 50,000 observations (see graph above).

During the October 2018, Watch for White Snakeroot Challenge, community scientists documented over 16,000 native wild Ageratina altissima plants across the City. There has never been a more detailed distribution map for a single plant species in the history of New York City. The data show that this species is especially abundant in shaded oak-tulip tree forest communities and other woodlands in our larger parks.

We are accumulating data so fast that it will take years to sort through it all. But with the help of community scientists, we have documented ten new introductions of plant species to the state of New York, some of them serious invasive threats, such as the Italian Arum (Arum italicum), currently threatening woodlands and gardens across the City.

Daniel Atha is the director of conservation outreach at the New York Botanical Garden. He has published two species new to science, conducted botanical field work in all 50 US states and in 2017, he completed a flora of New York’s Central Park. He co-manages the New York City EcoFlora project.

Brian Boom is Vice President for Conservation Strategy, Bassett Maguire Curator of Botany, and Director of NYBG Press and Science Outreach at The New York Botanical Garden. He has more than forty years of experience conducting biodiversity studies in North America, Latin America, and the Caribbean regions. He co-manages the New York City EcoFlora project.

Book Review: Cultivating the Designer’s Mind
“Every parcel has promise”- Restoration in the Urban Habitat