By Maureen Sundberg on May 15, 2019 in Urban Landscaping

Dr. Steven Handel (Rutgers University, Harvard University) is not your typical plant scientist. As he said himself at the 25th Annual ELA Conference, “Most plant ecologists study the beautiful places of the earth…and I have been driven to study cities.” Dr. Handel’s lecture, titled The Challenges of Restoring Urban Native Habitat, centered around a modern reality: with population growth and the spread of urban areas, cities have become a new and important habitat type. While many might consider cities to be ecologically sterile sources of environmental problems, Handel sees environmental opportunity in the expanding urban realm. 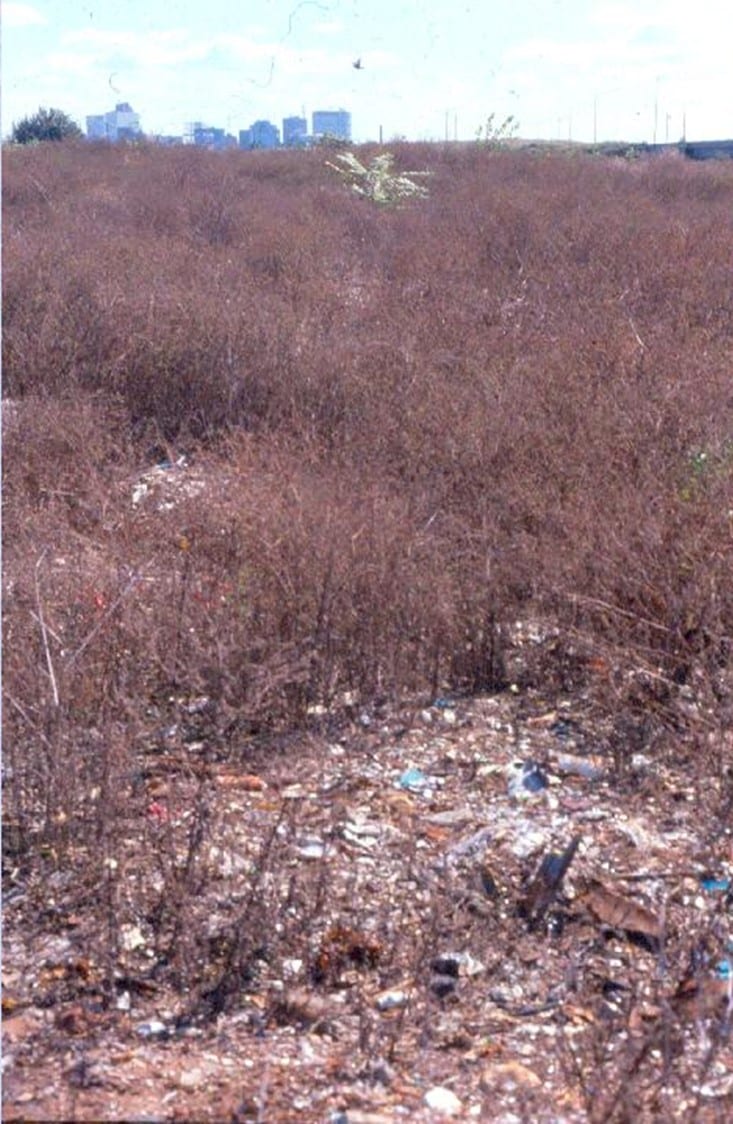 Cities are a uniquely difficult environment for plant survival. As any New Yorker knows, city inhabitants must be tough and adaptable to survive. Urban habitats tend to be fragmented, frequently disturbed, harsh, and unforgiving. The air is polluted, hotter, and drier: as Dr. Handel described, the heat island effect is reported to add 6°F to the temperature of the surrounding area. Since drainage is piped out of the city, hydrology is tightly controlled, leading to dry, hydrophobic soils. Bare soil – already difficult to find in a habitat so paved over and built upon – may be compacted, polluted, varied in composition, and mostly devoid of soil biota. Green spaces are few and far-between, with limited connectivity for their inhabitants. Where they exist, these green spaces are usually planted with non-native, ornamental plants that survive in the city environment, but provide few ecological services for native wildlife. In unmaintained areas, invasive plants (even hardier pioneers of urban areas) abound. Handel cited a study of the New York metropolitan area that found a correlation between increasing urbanization and a drop in native species richness that corresponds with a rise in non-native species.* 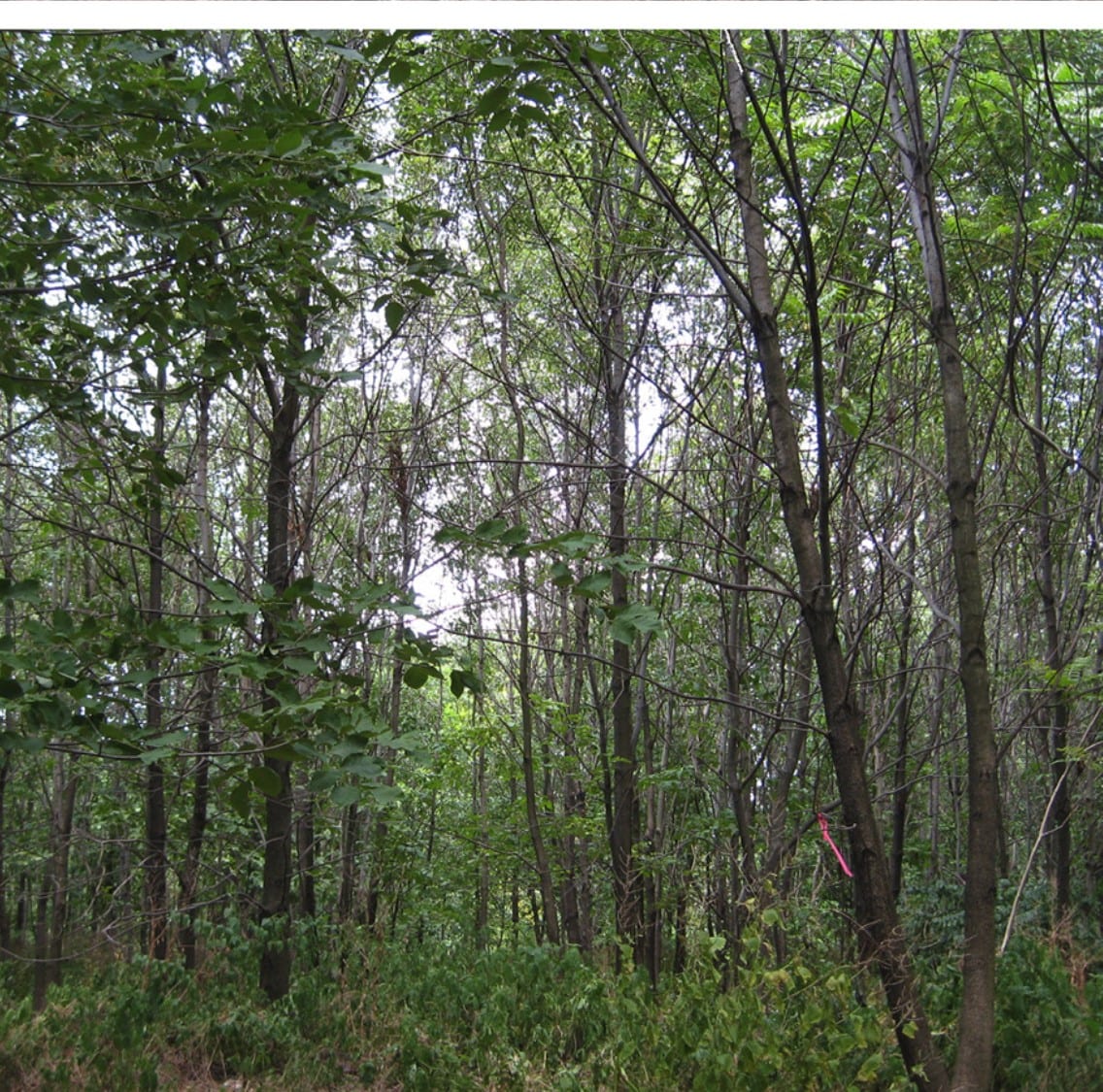 Meadowlands Landfill. 18 years after soil amendments and introduction of small patches of native shrubs and trees.

Even beyond the environmental difficulties, municipal priorities do not always align with ecological values. Dr. Handel shared a number of stories that highlight the difficulty of reconciling these two often competing principles. Cities are managed with their human inhabitants in mind, which may not always be ideal for plant and animal life. Traditional urban aesthetics abhor unkempt appearances and limit green spaces to well-delineated boxes and grids. Municipal officials and urban dwellers often have varying levels of ecological awareness, so garnering support for a project purely for “the sake of nature” may be difficult. Public fears about ticks, mosquitoes, and rats must be allayed. Urban projects, which are usually highly visible, must somehow benefit people: whether for recreation or simply to beautify a polluted area. City staff must be convinced to supply the staff hours required to implement, and then maintain, heavily trafficked areas. It is often necessary to jump through bureaucratic hoops to meet urban regulations and requirements. Certain types of properties also come with unique restrictions – for example, a municipal official asked Handel to install a meadow on a landfill but was flabbergasted when Handel suggested the use of prescribed fire or tilling to provide the occasional disturbance required to maintain such a meadow.

Despite all of these environmental and bureaucratic obstacles, cities are compelling locations for native restoration projects. Providing a corridor for native species through a city minimizes fragmentation of the surrounding habitat, and restores ecosystem processes to areas that have historically been excluded. In many cases, reintroducing viable ecosystem services can relieve pressure on municipal services, thereby decreasing the management costs that come with a large human population. Effective stormwater management minimizes the amount of water funneled into pipes and ejected from cities. Restored wetlands filter pollutants out of water, reducing the need for water treatment plants. By replacing heavily managed lawn areas with meadows or gardens, city employees save time and money by decreasing mowing and fertilizer use. According to the United Nations, about 55% of people in the world live in urban areas, with this number expected to rise to 68% by 2050. Implementing natural habitats in urban areas therefore has the potential to benefit the largest number of people, as well as slow the degradation of surrounding natural areas.

Dr. Handel has a wide portfolio when it comes to these urban restoration projects. He described work on two landfill restoration projects in the NY-NJ metropolitan area, and he was a consulting ecologist for the new Brooklyn Bridge Park, which is transforming an abandoned pier into public space. In all of these cases, Handel has managed to engineer solutions that result in a net positive both for the people who live near and use these spaces, and for the surrounding flora and fauna that have regained a habitat parcel in the thick of the concrete jungle. 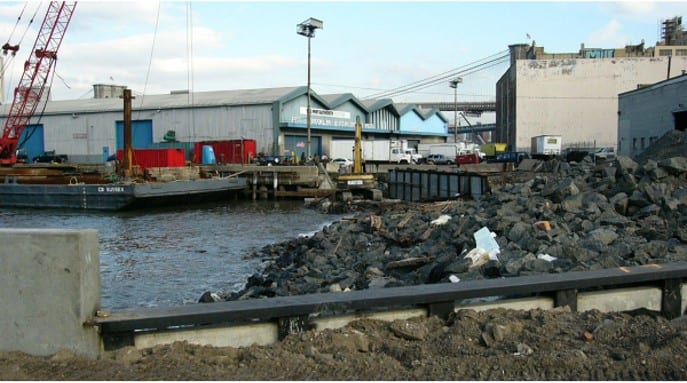 Brooklyn Bridge Park, before construction of the park. A degraded former industrial zone on the East River.

Urban restoration projects can provide interesting case studies for the application of ecological restoration principles. In particular, Dr. Handel stressed the importance of ensuring genetic diversity within a restoration project. Handel found that when he planted fruit-bearing trees at a landfill in Kearny, NJ – providing food and perching space for birds – native species, transported by birds, seeded themselves. Just as birds bring in genetically diverse seeds from the surrounding areas, restorers must be certain to source seed-grown plants. Natural populations have high levels of genetic variation and are therefore more resilient to environmental changes. If a restoration project is populated only by plants that were produced from cuttings of each other, it will lack genetic resilience, potentially endangering the long-term success of the project. Dr. Handel urges restorers to source seed-grown plants to ensure a healthy, genetically diverse ecosystem. 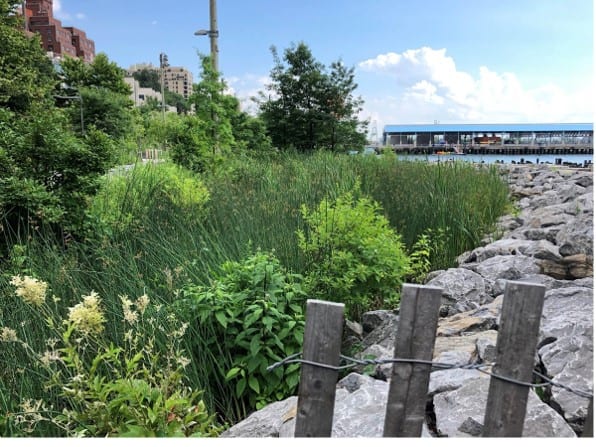 Any successful urban restoration project must also appeal to the people that live near it, and those who pay for it. In Kearny, the landfill was an eyesore from the highway: uncovered debris was clearly visible and only two species of plant (both non-natives) grew atop the mounds of garbage. While it was not financially feasible or practical to remove the tons of refuse from the site, Handel and his team were able to retop the landfill with new soil (cleverly sourced from a New York City construction site) and revegetate it with attractive native species. Brooklyn Bridge Park is environmental restoration disguised as a public works project – visitors are invited to use the playgrounds and sports fields, but also to wander the native woodland garden, meadows, and freshwater garden while looking out at the restored salt marsh area. Pathways and structures in the park allow people to feel comfortable in a natural setting, while abundant plantings provide respite from the hard angles of glass and concrete. Meanwhile, an entire ecosystem now thrives in what had once been a sterile, abandoned site. (ELA will host an Eco-tour of Brooklyn Bridge Park: Urban Oasis for Visitors in an Ecological Package on October 3, 2019.)

In undertaking these restoration projects, Handel hews to his core philosophy that “Every parcel has promise.” Any patch of land, no matter how small or how degraded, was once a site of myriad biological interactions. Converting a tiny urban lawn to native pollinator-friendly plantings can have rippling effects on the ecosystem as a whole. Even a salt marsh filled in with decades of garbage can again host migratory birds. While developed areas will only grow in size, forward-thinking designers can engineer ways for people to coexist with native species and reclaim unused, degraded sites for nature once more. Every parcel has promise, and each one of us can do our part to keep it.

Miho Connolly is a Nursery and Propagation Assistant at the Native Plant Trust in Framingham, MA.