By i.am.georgia.harris on April 15, 2021 in Book and DVD Reviews, Resources 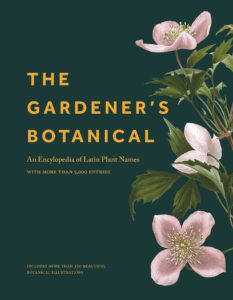 I am a linguist, meaning I study the structure of language, and I happen to have a tiny backyard. Last year in the early spring, as the pandemic began to settle in, Georgia, my good friend, neighbor, and garden expert helped me plant my own garden. Georgia’s knowledge and enthusiasm for plants is contagious, but what really struck me was how she so casually tossed around those Latin names, making those polysyllabic strings sound so familiar. Loo-KOH-thuh-way, she’d declare, I think you should plant Leucothoe at both ends of this walkway. And that would send me scrambling in my mind to figure out how it was spelled and what its etymology might be.

In Leucothoe, I see the Greek word for white, as in leukemia, the disease which affects white blood cells, and this way, I will remember the name of the plant and look for its bunches of white flowers in the spring.

Ross Bayton’s book, The Gardener’s Botanical: An Encyclopedia of Latin Names, is a delight for anyone who has ever been curious about plant names. It is beautifully bound and presented, and its gorgeous old botanical prints from the Royal Horticultural Society on every page make it a sheer pleasure to leaf through.

Flip through the pages to look up Leucothoe (without getting distracted by all the other visuals), and you learn that the plant was named for a mythical figure who was buried alive by her father and then transformed into a shrub by the sun god Helios. That is quite a story and quite an image.

But it might not be enough of an answer. You might want to keep looking around the page to see that twenty other plant names begin with Leuc- and that the one thing they all share is some property of whiteness. What Bayton doesn’t explicitly tell you is that the mythical Leucothoe was also known as Leucothea and that leuko– means white and theo means god, as in theology. The ancients looked at those beautiful flowers and saw in them a goddess dressed in white. Did the myth exist first, before the plant was named? Or did the plant inspire the myth? Probably the latter, but either way, the limitless bounds of the human imagination will never cease to amaze me.

By definition, encyclopedia entries should generally be longer and more detailed than those in most dictionaries. But Bayton’s entries, of which there are some five thousand, are necessarily short. Despite its claim to being the definitive guide to Botanical Latin, this book is far from being a final authority, but it does serve as a great place to start, a springboard for further inquiry. A word’s history can no less be summed up in a sentence as the story of a person’s life. In the meantime, you’ll learn a little Latin and Greek, or at least to recognize how deeply rooted these ancient languages are in our modern-day vocabulary. But keep browsing, and you’ll start to see a very human side to the story because naming practices tell us a lot about the people behind them and about the time in which they lived.

Some of the plants we chose for my garden had common English names, like Lady’s Mantle. I had to look up the spelling to determine whether mantle meant a cloak or covering and not the shelf above the fireplace. Bayton has included an index at the end of the book of some two thousand common plant names, and I learned that the botanical term for Lady’s Mantle is Alchemilla Mollis (along with the page numbers of where to find both the genus and the species names). Alchemilla is related to alchemy, a word with Arabic origins. It refers to the fact, Bayton tells us, that the plant’s hairy leaves repel water in an almost miraculous version. Other sources say that the name comes from the fact that alchemists collected these droplets of water, which they considered an elixir of life. Either way, I’ll be looking for those mystical water drops come spring. Mollis is more straightforwardly descriptive; it means soft, as in mollify or emollient, in reference to the texture of the plant’s hairs. It soon becomes apparent that many species names are common descriptors that are relatively transparent in meaning, at least once they have been pointed out: brevifolius (short leaves), centifolius (hundred leaves), conchifolius (shell leaves), grandifolius (big leaves), foliatus (with leaves).

Another plant with a common name that I was introduced to was Bugbane, which I interpreted as meaning the bane of the bug, something that might repel insects. I looked up bane in the dictionary, and sure enough, it is an archaic term for poison. Bayton informs us that its Latin name is Actaea; indeed, the little plastic tab that came with my plant read, Actaea simplex ‘Black negligee.’ Actaea is what the ancient Greeks called the elder plant, which has similar foliage; simplex means simple, as in without branches. I had to look further to get a complete picture: it was Pliny, the ancient Roman historian and naturalist, who first adopted the Greek word, Latinized it, and applied it to this particular plant. A millennium and a half later, the botanists of the 18th century re-discovered the name by reading Pliny and other Classical writings and chose to make it “official.”

Understanding this kind of historical context is helpful, and the first few pages of Bayton’s book provides such an outline, but only in the form of a very brief survey. We are reminded that botanical plant names are the result of a naming movement led by Carolus Linnaeus (born Carl von Linné in Sweden in 1707), who established the conventions that form the binomial system (genus plus species) that we still use today. The goal was to create a naming and identification system that would be accurate, precise, and authoritative. Linnaeus and the other European botanists didn’t actually speak Latin, but for centuries Latin had been the scientific community’s common language. Thus it made sense for the new nomenclature system to be rooted in Latin, a particular brand of Latin that has come to be known as Botanical Latin.

I love that Actaea is a name that was used during antiquity, even though it didn’t always refer to the same plant. And how it is now juxtaposed with the thoroughly modern cultivar name “Black negligee.” Someone, probably in the last half-century, was tasked with choosing a name to denote the plant’s distinctively dark-colored, lacy foliage.  And this being a matter of taxonomy, that name had to conform to the International Code of Nomenclature for Cultivated Plants.

For my garden, we also found some lovely flowering Columbine plants from our local nursery. This name I knew already. But I learned from Bayton that its Latin name is Aquilegia, which means eagle, in reference to the clawed petals. On the other hand, Columbine means dove because someone felt that each flower resembled fives doves clustered together head to head. Where someone saw an eagle’s claws, another saw doves. And yet others have seen a granny’s bonnet. There are no limits to the human imagination.

Goat’s beard must have gotten its name from its plume-like spikes of white flowers, but plenty of plants look like that. Some call it Bride’s Feathers. When precision and accuracy are needed, Aruncus dioicus does a better job. Aruncus comes from the classical Greek name for the plant, while dioicus was chosen to refer to the fact that the male reproductive organs are on one plant while the female ones are on another. Dioicus literally means two houses, and in Linnaeus’ time, sexual anatomy was determined to be a useful means of characterizing and distinguishing plant species.

Curious about the cup-and-saucer vine? Google is always an option. But by flipping through this book, you can begin to make your own discoveries. Perhaps you’ll better understand plant taxonomy, botanical art, general history, language history, or etymology. Just remember that no single entry tells the whole story; you have to keep browsing and looking for your own threads to follow. Maybe then you can turn to the Internet.

Note: If you are already familiar with Lorraine Harrison’s Latin for Gardeners: Over 3,000 Plant Names Explained (University of Chicago Press, 2012), you should know that Bayton’s book is an expansion of Harrison’s, with genus names in addition to species names, as well as an index of common names.

Henrietta Hung has a Ph.D. in linguistics and has taught at Brandeis, Tufts, MIT, Northeastern, and the University of Ottawa. She is currently working on a book in which she explores the stories behind the names of famous places in Rome.