Soils under pavement need to be compacted to meet load–bearing requirements so that sidewalks and other pavement won’t subside and fail. Soils are often compacted to 95% peak (Proctor or modified Proctor) density before pavements are laid. When trees are planted into these soils, root growth is severely reduced or eliminated beyond the tree-planting hole.  When root growth is restricted, tree growth suffers as water, nutrients, and oxygen are limited.

The need for a load-bearing soil under pavement gave rise to the development of CU-Structural Soil, a blended soil that can be compacted to 100% peak density to bear the load of a pavement while allowing tree roots to grow through it.

The Concept Behind the Soil

CU-Structural Soil is a mixture of crushed gravel and soil with a small amount of hydrogel to prevent the soil and stone from separating during the mixing and installation process. The keys to its success are the following: 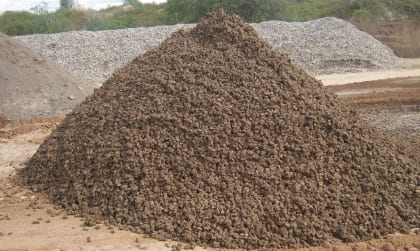 The crushed gravel and soil that are blended into CU-Structural Soil bear the load of pavement while still allowing large pore spaces for tree root growth.

How Is It used?

CU- Structural Soil requires a large volume of soil under pavement. A rule of thumb is to allow approximately two cubic feet of soil for every square foot of envisioned crown projection (the area under the dripline). However, we can get more precise if we use the soil volume calculation derived from a methodology developed by Lindsey and Bassuk [Lindsey, P. and Bassuk, N.L. 1991. Specifying Soil Volumes to Meet the Water Needs of Mature Urban Street Trees and Trees in Containers. Journal of Arboriculture. 17(6) 141-149.].

We recommend a 36” soil depth, although several projects have been successful using as shallow as 24“. We would not recommend any less than 24”. CU-Structural Soil has an available water holding capacity between 7% and 12% depending on the level of compaction. This is equivalent to a loamy sand or sandy loam. Based on water holding capacity, you would need about 1.3 times the amount of CU-Structural Soil as you would need for an equivalent sized tree growing in sandy loam.  (See the table below for soil volume recommendations.)

It is inaccurate to characterize CU-Structural Soil as having the water holding capacity of the soil alone. Research has shown that the stone matrix and substrate material act together with the clayey soil coating the stone. [Grabosky, Jason, Edward Haffner, and Nina Bassuk. 2009. Arboriculture & Urban Forestry 35(5): 271-278].  Most tree roots grow very vigorously in CU-Structural Soil. However, due to its well-drained nature, trees that prefer well-drained soils do best in CU- Structural Soil. Depending on the stone type used to make CU-Structural Soil, the pH of the soil may be affected (e.g. limestone vs. granite). Good tree selection practices and establishment procedures should be used with CU- Structural Soil as would be done with any tree installation. 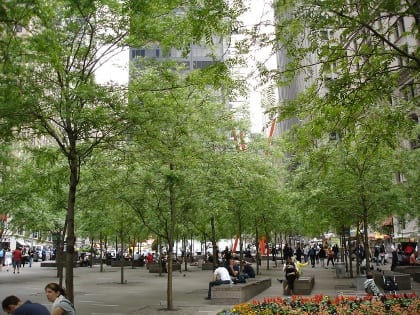 Trees at Zuccotti Park in Lower Manhattan, NY, were planted in CU-Structural Soil.

It is important to maximize the water infiltration through the pavement to replenish CU-Soil as with any soil. A porous opening around the tree of approximately 50 square feet is recommended to allow for water infiltration. 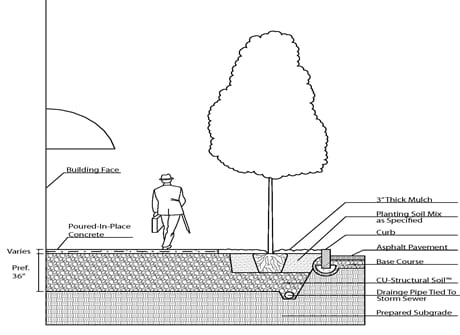 For more information on the research and use of CU-Structural Soil go to:

Nina Bassuk has been a professor and program leader of the Urban Horticulture Institute at Cornell University for the past 30 years. She is a member of the Executive Committee of the New York State Urban Forestry Council. In addition, Dr. Bassuk co-authored Trees in the Urban Landscape, a text on establishing trees in disturbed and urban landscapes, and has written hundreds of papers on the physiological problems of plants growing in urban environments, improved plant selections for difficult sites, soil modification (including the development of CU-Structural Soil), and transplanting technology. She may be reached at nlb2@cornell.edu.

When Lightning Strikes: Counting on Disturbance, Planning for Succession
Dealing with Soil Compaction