By Penny Lewis on January 18, 2014 in Landscape Design

Be Prepared for Regionally Common Disturbances

Disturbances occur, and our landscapes ought to be ready for them. Hurricanes and wildfires are common natural disturbances whose impacts can be mitigated with sensible landscape design and larger-scale planning (fig. 8.3). 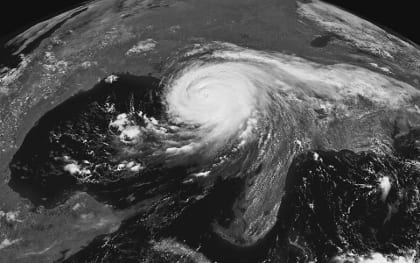 Much of the damage caused by hurricanes stems from falling limbs, flying debris, and the direct force of winds (Abbey 1994). A simple preventive step is to remove dead branches and dead or diseased trees from areas where they might cause a problem. Tall sentinel trees such as cabbage palm (Sabal palmetto) and bald cypress placed at the edges of a lot can break up wind flows and act as initial storm buffers (fig. 8.4). Storm walls and wind deflector trees with low centers of gravity and deep root systems, such as live oak (Quercus virginiana), can guide winds up and over buildings. These species mentioned can also survive the flooding that accompanies hurricanes. Wind gusts can be slowed with layered plantings, and tightly planted protector plant groves can intercept airborne debris and protect leeward structures. Trees planted in masses will survive high winds better than solitary specimens. Using a variety of native plants in protector groves and plant masses can also provide necessary shelter for wildlife during storms. 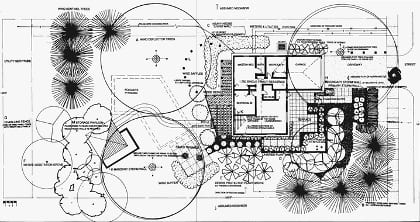 Far from the Gulf Coast, state universities, county governments, and local fire departments throughout the American West are issuing guidelines on landscaping in the wildfire zone. As decades of fire suppression give way to “let it burn” policies, fire is returning as a natural element of many environments. The main advice handed out is to reduce fuel (meaning flammable trees, shrubs, and even grasses) in concentric rings of defensible space. The problem with this advice, as Kim Sorvig (2004) found in his analysis of the 2003 Cedar and Wildcat Canyon fires near San Diego, is that it does not guarantee the safety of homes and may actually create the conditions that prompt more intense wildfires. Hot fires driven by strong winds, Sorvig notes, can leap over cleared space, burning one house and then, for no apparent reason, skipping the next. Excessive clearing can increase soil erosion and reduce the leaf litter falling to the soil, leaf litter that otherwise would contribute to the soil’s water-holding organic matter. The effective localized drought that results creates the ideal conditions for wildfire.

The damage from Hurricane Katrina in New Orleans showed that preparations by individual property owners can be only so effective when the hurricane resistance of the regional landscape has been degraded. Restoring wetlands and sedimentation cycles in the Mississippi River delta will probably go further to mitigate disturbance than the choice of trees made by citizens. Likewise, when counties allow suburban-style development in fire-prone areas, damage is inevitable even with the best fire-resistant landscapes. Community-wide firebreaks, in the form of parks and constructed wetlands, are probably more effective than smaller clearings around individual homes. At a larger scale, controlled burns that create a mosaic of healthy forests can help prevent catastrophic wildfire (see chap. 9). Planning and management at the neighborhood, county, and regional levels are necessary to create landscapes that are truly prepared for disturbance.

Just as plants have adapted to the seasonal stresses and abundances of the climate in which they live (see chap. 1), plants have evolved to live in the conditions imposed by their regional disturbance regime. Some plant species, sometimes called fugitive species (similar to Grimes’s ruderal species; see chap. 3), inhabit a niche created by disturbance. One such plant is the pin cherry (Prunus pensylvanica), whose life history and ecological role were studied by Peter Marks (1974). Pin cherry is a short-lived tree species that flourishes on disturbed sites in the hardwood forests of the northeastern United States. In the spring its branches are covered with masses of small white flowers with a fuzz of protruding stamens. In summer, these flowers give way to bright red fruit that is prized by birds (fig. 8.5). Before the pin cherries are overtaken by taller and more shade-tolerant maples and beeches, birds distribute large quantities of their seed. Working in New Hampshire’s Hubbard Brook experimental forest, Marks found an average of five viable seeds per square foot buried in the soil along one transect. When fire, windthrow, or clearing opens up another gap in the forest, these seeds quickly germinate and fill the area with pin cherry seedlings. Not only is this a viable life history strategy for pin cherry, but, Marks found, it plays an important role in the northern hardwood forest ecosystem. The pin cherries that quickly grow up on disturbed sites reduce runoff and loss of nutrients from the forest ecosystem. Thus they help create stability for the overall ecosystem in a context of disturbance.

Figure 8.5 Pin cherry’s fruits are attractive to birds, which spread seeds throughout the northeastern forest. When disturbance occurs, these seeds sprout and quickly fill the disturbed patch.

Fugitive species such as pin cherry are not the only plants to evolve in response to disturbance. In a 1980 article on the nonequilibrium coexistence of plants, Steward Pickett pointed out that disturbance occurs within the lifetimes of most perennial plants and therefore exerts regular selective pressure on plants. Pickett argued that plant species have specialized for various points along the continuum of disturbance to recovery just as they have along all resource continua (see chap. 3). Some species, such as pin cherry, have evolved to take advantage of the abundance of light and nutrients freed up by disturbance. The cones of lodgepole pines, for instance, will open only after being exposed to a fire. Other plants have evolved to outcompete others in the low-resource environment of a community that has not been disturbed for some time.

A provocative suggestion, made by Robert Mutch in 1970, was that fire-adapted plants such as ponderosa pine (Pinus ponderosa) and eucalyptus (Eucalyptus obliqua) may actually encourage fires with their flammable litter, in order to clear the area around them of competitors. These plants may have gained an evolutionary advantage by going beyond adaptation to the inevitable and actively facilitating their regional disturbance regime.

Include Plants from Different Points along the Disturbance–Recovery Continuum

In order to be fully prepared for disturbance, designed plant communities should include species  evolved for different points along the continuum from disturbance to recovery. Fugitive species, and early successional species generally, have conventionally been regarded as lesser species that are short-lived and weedy. We want to plant the trees that will last for 100 years. In the context of disturbance, however, planting both fugitive and long-lived species can help create a landscape that can persist indefinitely.

As Marks’s research showed, fugitive species play an important role in the stability of a landscape. By quickly stabilizing disturbed areas, they reduce erosion and prevent the loss of nutrients. When their propagules are present on site in the way pin cherry seeds were in Marks’s research plots, they do all this by themselves, without the need for emergency planting, seeding, or mechanical erosion control. Native fugitive species also play an important role in maintaining community composition. As the first species to grow on a disturbed site, it is they who have to face off against weeds and invasive species. Because they are adapted to grow quickly in open patches, they have a much better chance of success than slow-growing, long-lived plants. These late successional plants have their role too, of course, as it is they who can command a site in the intervals between disturbances.

In the Northeast, where windthrow is a major disturbance, early successional species include strawberry, raspberry, and blackberry, shrubs such as shadbush (Amelanchier canadensis), and trees such as pin cherry and aspen. Long-lived species that grow in undisturbed habitat include maples, beech, and hemlock.

A landscape that is planted to pass through several successional stages will probably accumulate the necessary propagules from early successional species just as a function of its growth and development. On larger sites, a purposely patchy environment can be created and maintained through deliberate disturbance in order to maintain populations of species adapted to each patch (see chap. 9). On smaller sites, fugitive species can be “borrowed” from adjacent properties, although it is important to assess whether these species are desirable before planning on incorporating them into a community.

Communities that incorporate plants from points all along the disturbance continuum are prepared to live in a disturbance regime. Between disturbances they can grow majestically. And when disturbances occur they can bounce back quickly. Should we also include plants that may encourage disturbance? Perhaps not next to the house. In the broader landscape of their native environment, however, these plants can help nature perform its own maintenance.

Travis Beck is Director of Horticulture at Mt. Cuba Center in northern Delaware. He is a registered landscape architect with a master’s degree in horticulture, a certified permaculture designer and a LEED Accredited Professional. He is the author of Principles of Ecological Landscape Design, published in 2013 by Island Press. He may be reached at TBeck@mtcubacenter.org.