Soil compaction is the single most difficult and harmful environmental or abiotic condition that a tree or shrub can experience. There are other environmental problems such as drought, cold temperatures, poor drainage, or lack of sunlight, but for the most part these problems can be overcome by appropriate plant selection. In the case of soil compaction, no amount of skillful plant selection can remedy the problem. Quite simply, if a plant’s roots can’t grow into the soil, the soil might as well not be there.

Knowing about soil density on a site is important because there are densities that will stop root penetration. The greater the usable soil volume for plant root growth, the greater will be a plant’s growth potential. 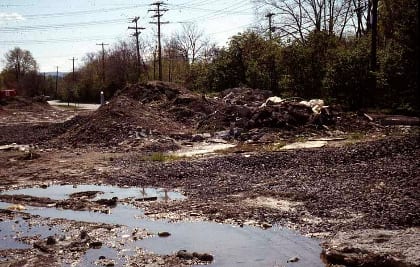 After construction, the soil that remains on site is often compacted and poorly draining; conditions that reduce root penetration.

The effects of soil compaction are twofold: increased soil density to potentially root growth limiting levels and decreased soil drainage. Both of these consequences must be addressed if compaction is to be remedied.

There are three ways that soil can be modified. Compacted soil can be removed and replaced, ‘buried’ under soil with better growing characteristics, or amended.

Removal of soil and replacement with better soil is a drastic solution, but one that might be justified by the demands of the proposed landscape. Most often, soil replacement is feasible only when the amount to be replaced is not very great.

It is common to see topsoil brought onto a site and spread over an area so that two to four inches of new soil is added. This is most common on sites that have acted as the staging area for some construction project. The added topsoil helps to bury ruts and give a neater appearance. Its usual function is to aid in grass reestablishment. This amount of soil is of no benefit to trees and shrubs. For trees and shrubs, at least fifteen inches to as much as three feet of new soil is necessary for good growth. Generally, the larger the plant and/or the more water it requires, the greater the replaced soil depth should be.

Although many might specify ‘topsoil’ as soil to use as a replacement, there is no standardized definition of the physical or chemical properties of topsoil. Topsoil could literally be any soil ‘on top’ of the ground. It is necessary to specify the physical and chemical properties of replacement soil so that you bring in a soil that can sustain plant growth. To do this, we use a soil specification that spells out the properties of an acceptable soil so that a contractor can find it or blend a soil to meet those criteria. 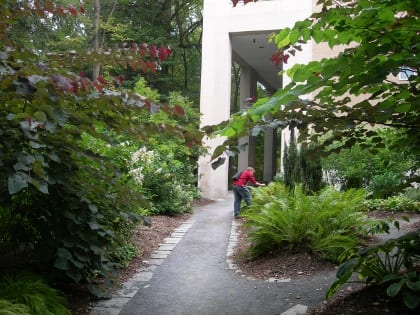 Where it is not practical to remove soil and replace it, it is possible to bury the poor soil under a better, specified soil. This may be done over a large, continuous area or in discrete areas corresponding to areas where large plants will be planted. The most common way to do this is by creating berms or raised planting areas. Too often, berms are created by scraping unspecified soil into a small mound using a front- end loader or similar large machine. In this process, even reasonable soil may become compacted. A better way to create landforms is to bring in specified, compaction-resistant soil and place it on site. The depth of these mounds should be no less than 15inches, but preferably closer to three feet if large plant material is to be established there.

Research at Cornell University has shown that it is possible, to amend an existing poor soil so that its density is below a root growth limiting levels and where drainage is also increased. To accomplish these goals with inorganic amendments such as sand, approximately 70% by volume would need to be added to affect a positive change in drainage. Adding less actually decreases the porosity of the soil. It is important too that any amendment should be predominantly uniform and preferably medium to large sized. If a well-graded sand is added, one with particles of all sizes, the smaller particles will nest within the larger one, effectively reducing pore space. The best amendment is one of nearly equal sized particles. When the equally sized sand particles become so numerous in an amended soil so that they begin to touch each other, large pores will begin to be formed. 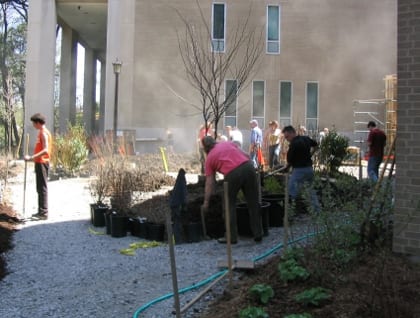 In practice, it is very difficult to amend a soil on site with enough inorganic amendment to affect a meaningful improvement. So much would need to be added and tilled into 18”-36”, that this is not a viable option. Adding sand is useful when soils can be mixed away from the site and then brought in, which is essentially the same as bringing in a new soil.

The practice of amending a soil with organic matter is an ancient agricultural practice. Recent research has shown that organic amendment can have a beneficial effect in reducing soil density to below roots limiting levels, even in soils that had been re-compacted after the amendment was added.

The correct way to add organic matter is over a site, not in a hole. The amendment should be tilled or dug in to a depth of 18” and enough added to make a meaningful difference. With a compacted sandy loam, it is necessary to add at least 25% by volume to the entire 18” depth profile to make a positive change in soil density and drainage. Six inches of compost would be added over a site and then a backhoe would dig down to 18 inches, picking up the soil and compost and then dumping the mixture on site. This provides veins of compost that aid in plant establishment. In a compacted, heavy, clayey soil, at least 50% of organic matter would have to be added to the same depth to decrease soil density below root limiting thresholds. Even with this level of organic matter, it is not clear whether drainage can be changed enough to remove the effects of poor drainage in the planting site. Therefore, with a heavy, clayey soil, amendments should be added to reduce bulk density; however, plants should still be chosen that could tolerate intermittently wet soils.

There are many types of organic matter that may be used to amend soils. Peat moss, peat humus, food waste compost, composted brewers waste, or other composted organic material can be usefully employed as long as the soluble salts and pH are compatible with the plants you will be growing. A sustainable source of compost is recommended.

There may be other issues that will need to be addressed when using compost. Organic amendments should always be well-composted and a lab test run on them to verify pH, soluble salts, nutrient availability, and organic matter content.  Moreover, if the amendment is too fresh and not well-composted, there may be high soluble salts, an abundance of weed seeds or wood chips, which can tie up some soil nitrogen while they are decomposing.

It is important for the compacted soil under newly added soil or amended soils to drain well. With the addition of amendments, or the use of good soil on a site, drainage should be fine within that depth of modified soil. However, below the better soil there are often layers of poorly draining, compacted soil that can force excess water to ‘back up’ into the plants’ root zones.

A technique called sub-surface soil sculpting can aid in this process. With sub-surface sculpting, the slope of the soil buried under well-draining new or amended soil is graded in a way that moves excess water away from the prepared planting sites. Water should drain freely through the replaced soil and when it reaches the old soil, it should be channeled away by swales or drains via gravity. The grade or form of the replaced soil may look nothing like the shape of the buried soil that has been sculpted for positive drainage below. There are other techniques such as French drains and perforated pipe that may be used to move excess water away.

Nina Bassuk has been a professor and program leader of the Urban Horticulture Institute at Cornell University for the past 30 years. She is a member of the Executive Committee of the New York State Urban Forestry Council. In addition, Dr. Bassuk co-authored Trees in the Urban Landscape, a text on establishing trees in disturbed and urban landscapes, and has written hundreds of papers on the physiological problems of plants growing in urban environments, improved plant selections for difficult sites, soil modification (including the development of CU-Structural Soil), and transplanting technology. She may be reached at nlb2@cornell.edu.