By i.am.georgia.harris on December 15, 2020 in Landscape Challenges, Pest Management

This past September I noticed, far off in the distance, a dying white pine (Pinus strobus) located on the edge of our driving range at The Country Club. The Country Club is located in Brookline, Massachusetts, just west of Boston, and is the oldest golf club in the United States. 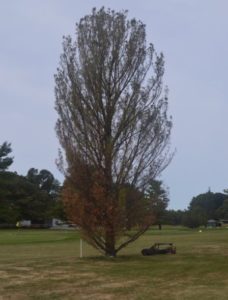 Figure 1. This is the white pine on the driving range. It was in very bad shape due to repeated assaults by golfers hitting golf balls into this tree at various heights along the tree. Golf balls create wounds to needles, branches, and bark creating ports of entry for pathogenic spores of pitch canker.

Upon closer inspection of this tree, I realized that it was really dying. In fact, it was almost dead! Figure 1, shows just how bad this pine was. The affected white pine was the end tree in a long line of other white pines separating the driving range portion of the golf course from the playing areas (Figure 2). 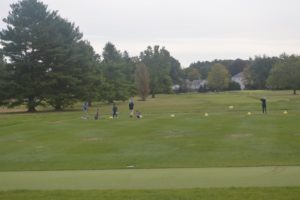 Figure 2. The affected white pine is at the very end of a long line of other white pines used as a screen. The affected tree is located in view of wayward golf balls that repeatedly hit this end tree causing severe bark damage to the entire tree.

Common sense told me that this tree, based on its location, was hit many times over the years by flying golf balls which caused severe injuries to needles, twigs, branches, limbs, and trunk. The injury symptoms were copious flows of resin (i.e. pitch or sap) from the sites of injury. Figure 3, illustrates just how much resin or pitch was exuding from the tree. 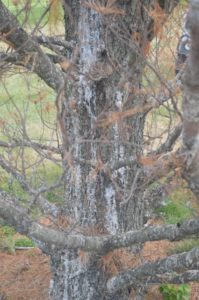 After much research, I concluded that this white pine was infected by the pitch canker pathogenic fungus, Fusarium circinatum. The spores of this fungus, by way of air currents, entered the bark and needle injuries caused mostly by flying golf balls.

Older textbooks and literature list this causal fungus as F. lateritium f. sp. pini. After many years of research conducted by plant pathologists, it was renamed F. moniliforme var. subglutinans (syn. F. subglutinans) (Sinclair, Lyon and Johnson, 1987; Storer, Wood and Gordon, 2002). However, after further study, it has now been classified as Fusarium circinatum, the pitch canker fungus of pines.

The Fusarium plant pathogen, along with Verticillium, is known to cause ‘wilting diseases’ on many plant species including several floral crops. For example, fusarium wilts affects Aster, Carnation (Dianthus), Chrysanthemum, Cyclamen, Dahlia, Delphinium, Freesia, and Iris, to name a few (Powell and Lindquist, 1987). Researchers have found that isolates (i.e. portions of the infecting fungus) from gladiolus corms in Florida were pathogenic on pines (Sinclair et al, 1987), but other researchers later proved this connection to be wrong (Wingfield, Hammerbacher, Ganley, Steenkamp, Gordon, Wingfield and Coutinho, 2008).

To repeat, the Fusarium plant pathogens have many species that cause plant diseases commonly referred to as ‘wilts’ or ‘wilting disease’ and if you are lucky to have a greenhouse and grow flower and vegetable crops you may have battled a Fusarium disease (Alexopoulos, Mims and Blackwell, 1996; Powell and Lindquist, 1992).

In general, and depending on the affected plant species, Fusarium spores will enter via ports of entry; roots or above ground plant parts, and infect the water conducting vessels (xylem) of the targeted plant resulting in wilting of part of the plant or the entire plant.

With repeated infection, the plant will lose much vigor and die. The symptoms of wilting are a direct result of the conidia (asexual spores) infecting the vascular (water conducting) system whether it be infections of roots, trunk, limbs, branches, or twigs of the affected plant.

In addition, as the conidia of the pathogen increase in number in the plant’s vascular system, the affected tissues also discolor and turn brown (Powell and Lindquist, 1992). 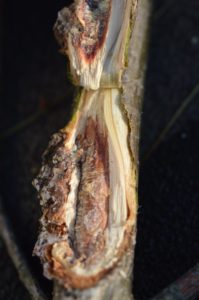 Figure 4. I cut into this small white pine branch canker revealing the characteristic resin-soaked browning (discoloration) of the infected wood by the pitch canker fungus. This is a characteristic of fungal infection by this disease.

However, F. circinatum is specific to pines causing, vascular clogging, foliage wilt, and dieback accompanied by a progression of pitch oozing lesions and cankers. The oozing resin or pitch eventually turns part of the xylem, just under the bark, a brownish color. See figure 4, which shows vascular browning in white pine.

Timeline and Regions of Occurrence

During the 1970s, the pitch canker pathogen caused much mortality and economic loss to slash pine (P. elliottii) plantations in Florida (Gordon, 2006). By the mid-1980s, pitch canker was discovered as the causal agent responsible for extensive mortality to Monterey pines (P. radiata) in coastal California (Gordon et al, 2020). Douglas fir (Pseudotsuga menziesii) in California has also been successfully infected by this disease (Storer et al, 2020).

The pathogen is thought to come from Mexico and contaminated our native pines by way of pathogen infested seed and nursery stock (Gordon, 2006).  The disease is also a problem in nurseries and can spread to seeds and damaged twigs. Therefore, fungal contaminated seeds and seedlings have proven to be the first major source of infection of our native pines in California and the southeastern U.S.

Gordon (2006) reported that 51 species of pine and also Douglas fir show varying degrees of susceptibility to the pitch canker pathogen. According to Gordon (2006) and Sinclair et al, (1987), the pine species most highly susceptible to this disease are Virginia pine, shortleaf pine, Monterey pine, and Mexican weeping pine (P. patula).

Slash pine is determined to be intermediate in susceptibility.

The importance of air currents

Conidia, pollen, and other potential allergens can attain very high population numbers in the air we breathe causing irritation to humans and other animals during the spring, summer, and fall. Other fungal sources of common airborne conidia include some genera that may be familiar to you and include Cladosporium, Aspergillus, Alternaria, Penicillium, and many others (Alexopoulos et al, 1996). In other words, microscopic pathogens are all around us!

The Importance of Humidity

Gordon (2006), reports that in addition to having enough pitch canker conidia around to infect a suitable host, moisture plays a significant role in the expression of this disease. For example, he reveals that pitch canker in California is more severe near the coast where fog is more prevalent than sites farther inland where humidity is lower or less consistent.

In the southeastern portion of the U.S. humidity is generally higher and when temperatures are within a permissive range for disease expression pitch canker incidents increase considerably as opposed to when humidity is very low.

The Importance of Tree Wounds and Temperature for Successful Conidia Contact

Tree wounds on bark and to underlying xylem can be caused by many different agents. For example, many grounds maintenance activities such as pruning trees and weed-whacking around trees cause damage to twigs, limbs, and trunks of affected pines.

Tree wounds leading to infection (conidia contact to wound tissues) can occur at any time of the year and can lead to possible pitch canker infection. However, most successful infections occur during late summer to fall when air temperatures do not fall below 50 degrees Fahrenheit and the conidia are viable and can take hold causing disease expression to begin (Sinclair et al, 1987). This leads one to think about the influences of Global Warming or climate change has on disease expression. Our local climate is more unpredictable than it was when pitch canker was first discovered back in the 1940s. Massachusetts and the other New England states are very humid at times during the growing season.

Wounds caused by feeding insects also create ports of entry for this pathogen. In California, several pine feeding insects have been determined to create suitable points of entry for this airborne fungus. For example, Storer et al (2002) states that in addition to creating ports of entry for the pathogen, species in the following insect taxa can also serve as vectors for this disease. They reveal that the engraver beetles Ips spp, (Coleoptera: Scolytidae), scolytid twig beetles, Pityophthorus spp., and the scolytid Monterey pine cone beetle, Conophthorus radiatae are capable vectors.

However, in the southeastern U.S., only one insect vector has been determined to vector this disease. More research may reveal that there may be more insect vectors. Wounds created in pines by insects (non-vectors) and by mechanical means still remain as the major reason for airborne spore infection (Storer et al, 2002). Hartman, Pirone, and Sall (2000) state that in the southeastern portion of the U.S. the deodar weevil (Coleoptera: Pissodes nemorensis), a native insect which became a pest on southern pines (e.g. loblolly, shortleaf and longleaf, P .palustris) in timber and seed plantations (Johnson and Lyon, 1991) is a confirmed vector and contributes to this disease where pitch canker has been a problem since its discovery there back in the 1940s.

The symptoms reported in the literature to white pine and other pines are consistent with what I witnessed at The Country Club. Figure 5, illustrates branch cankers where the bark remains on the canker face (Sinclair et al, 1987) Figures 6, 7, and 8 illustrate other diagnostic symptoms. 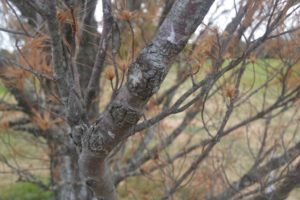 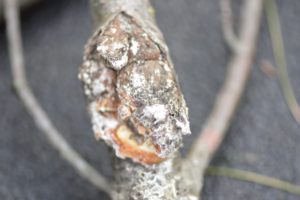 Figure 6. A canker on a smaller branch with the characteristic bark-faced appearance. 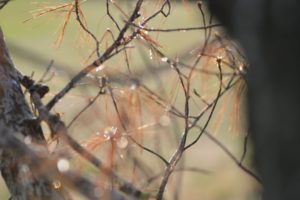 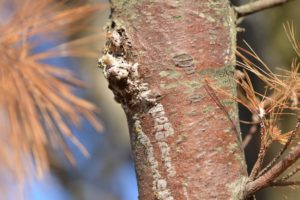 Figure 8,Pitch canker symptoms include turning the white pine bark a reddisd–brown color on large and small branches as seen in these photographs. 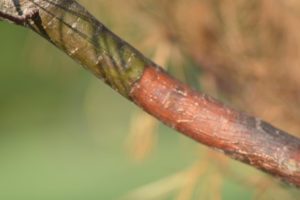 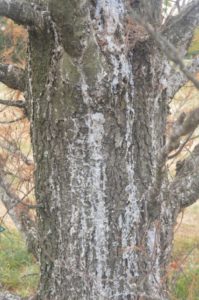 Figure 9. Another view of the main trunk with excessive resin dripping from golf ball injuries. Trunk and branch cankers with characteristic pitch or resin flow are a telltale sign of advanced infection by this disease.

In addition to exposure to windborne pitch canker conidia, tree wounds and accompanying environmental conditions conducive for pitch canker development, including excessive nitrogen fertilization can stress these pines. When coupled with other environmental stresses such as heat and drought, white pines can weaken and thereby be more susceptible to infection by this pathogenic fungus as well as from other pathogens and insects. 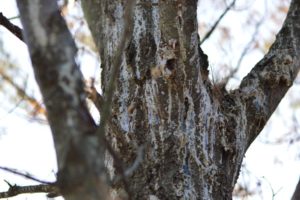 Figure 10. In this photo, excessive resin flow is visible approximately 10 feet up from ground level. 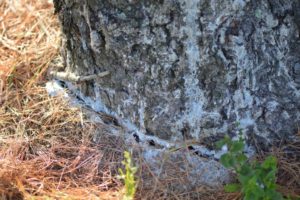 Figure 11. Excessive resin flow at ground level is evident on this specimen.

Check the white pines and other pines on your properties for excessive resin flow. If you notice these symptoms on your larger white pines, take photos and canker samples and send both to your state university extension lab. It could be pitch canker. Resin flow from a white pine trunk could also be an infestation of turpentine beetles. For more information about this pest, click on this website.

Could We Manage Backyards to Increase Biodiversity?
Green Stormwater Infrastructure