By Maureen Sundberg on October 15, 2018 in Pest Management, Trees

There are many species of bark beetles in the United States which are destructive to both hardwood and softwood tree species. Some have been historically devastating to many valuable timber species because certain bark beetle species kill their host trees when large populations build up to the point of overtaking their host tree defenses.

Occasionally, the bark beetles known as turpentine beetles may infest an individual white pine in a group of healthy growing pines in the suburban and rural landscape. Figure 1 is a good example. It illustrates clearly how the infested Eastern white pine (Pinus strobus) stands out as being in distress (i.e. off color) against the surrounding healthy growing white pines. 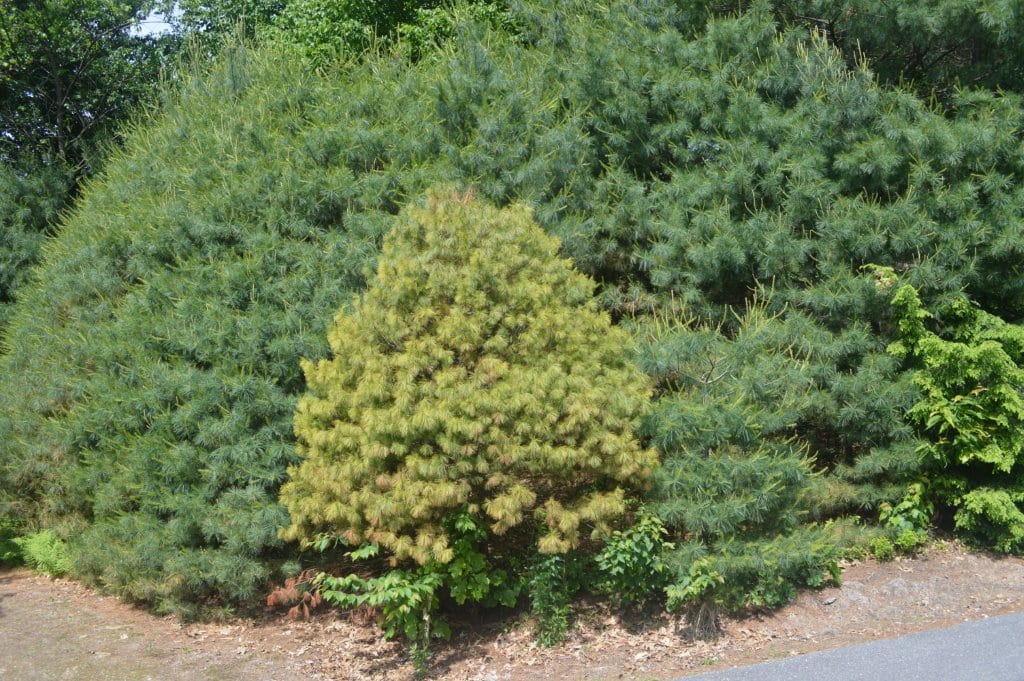 Figure 1: This individual white pine was turning an off color in the spring of 2016. This photograph was taken on June 9, 2018. Foliage lightening of the entire small tree is a good indication of turpentine beetle infestation.

To see images of the turpentine beetles and other bark beetles visit www.barkbeetles.org and click on “Southern U.S. Bark Beetles.”

The family Scolytidae contains more than 500 North American species and is divided into two feeding groups based on the portion of the tree that the beetles attack for feeding, reproduction and brood development (Coulson and Witter, 1984). The bark beetles in this family are either deep wood borers and bore into and feed in the xylem or sapwood ( e.g. ambrosia beetles) or they are shallow borers and bore into their hosts just beneath the bark and feed on the nutritious phloem and therefore, are referred to as phloem feeders (e.g. bark beetles).

Other scolytid genera different from Dendroctonus are also phloem feeders and include species in the Scolytus and Ips. This fact sheet focuses on the phloem feeding red and black turpentine beetles infesting landscape white pines in southern New England. In addition to pines (Pinus spp.) their other host trees include species of spruce (Picea), true firs (Abies) and larch (Larix).

There are two species of turpentine beetles inhabiting North America. The adult red turpentine beetle is reddish brown in color and has the broadest host range occurring throughout the United States except in the southeastern and Gulf states (Cranshaw, 2004).

The adult black turpentine beetle is black in color and ranges throughout the southeastern states, Gulf states and has been found in New England in portions of Maine, New Hampshire and Massachusetts (Norton, 2016; Johnson and Lyon, 1991). 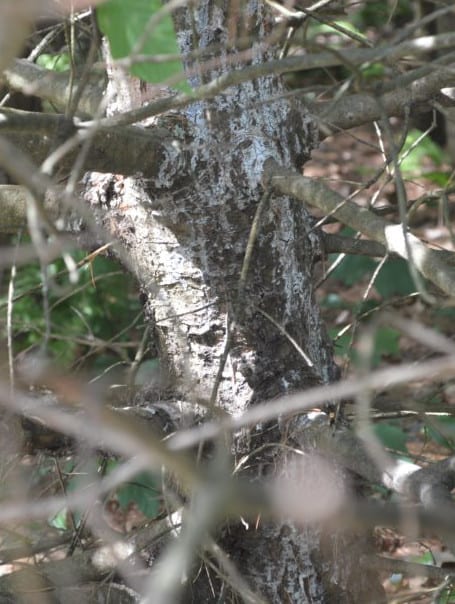 Figure 2: I checked the pine shown in Figure 1 and noticed pitch or sap oozing (pitch masses) from beetle entrance holes on the lower trunk. Pitch oozing was not evident above six feet from the ground. The surrounding healthy white pines show no evidence of turpentine beetle pitch masses at the time this photo was taken on June 9, 2018.

The first symptom of white pine attack (and other hosts previously mentioned) by either beetle species is pitch or resin oozing from individual spots on the lower trunk. (Figure 2). Pitch or resin is commonly known as sap. The pitch oozing is caused by the adult female beetle chewing (boring) an entrance hole into the host tree. The second symptom is yellowing to brown foliage discoloration.

Adult female beetles first attack white pine on the lower four foot portion of the trunk by chewing through the bark forming an entrance hole to enter the tree beneath the bark, out of sight from human and predatory animal eyes. Adult beetle size for both species is close in length to a grain of rice. Some references state that the black turpentine beetle (5.0 to 8.0 mm in length) is the largest, but other references list the red turpentine beetle (5.4 to 9.0 mm) as the largest (Coulson and Witter, 1984).

Both beetle species are similar in shape, life cycle requirements, and host tree damage symptoms (Coulson and Witter, 1984; Johnson and Lyon 1991). If you happen to be lucky and see live adults on your white pines or other host tree trunks, they can be easily identified by their size and color. However, if you extract (cut out) the feeding larvae just beneath the bark you can only identify the species by securing an expert specializing in larval bark beetle taxonomy because both species look identical to the naked eye in the larval stage!

Tree attack or colonization begins in spring and early summer with a female beetle becoming chemically aroused and attracted to the volatile (airborne) white pine odors that are naturally emitted from the tree while it is in a weakened condition (Johnson and Lyon 1991; Coulson and Witter, 1984; Smith, 1971).

The female produces her own airborne attractants (pheromones) which are inadvertently mixed with the host tree odors and the combination of these gaseous compounds help guide a suitable male to her for mating once both are safely inside the tree, concealed just under the bark. Male and female beetles are monogamous (Coulson and Witter, 1984).

Resin or sap is produced by the tree in response to the female entering the tree for mating and feeding. Resin or sap oozing serves as the first characteristic symptom of tree colonization or attack (Mayfield and Foltz, 2018; Johnson and Lyon 1991; Coulson and Witter, 1984). Foliage discoloration as seen in Figure 1 and Figure 3 is the second symptom of beetle damage. However, you are most likely to first notice needle yellowing and then observe the trunk pitch masses or sap oozing. 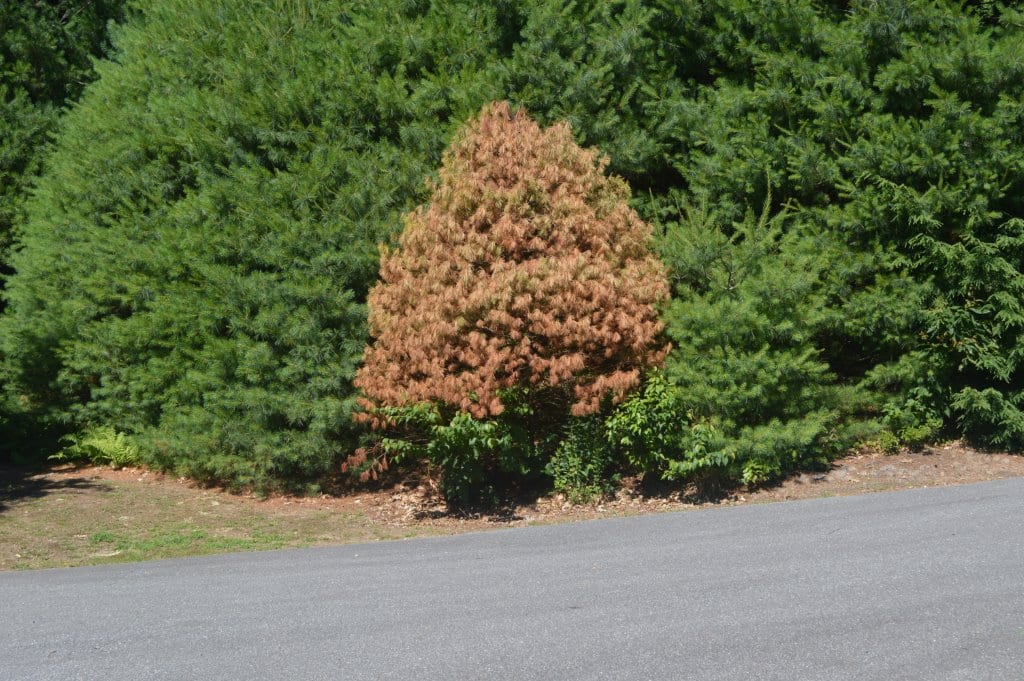 Figure 3: These white pines are lightly trimmed on an annual basis. By late June this turpentine beetle infested white pine has suffered more phloem damage. The needles are turning from yellow to brown.

The resin or pitch masses have a single hole in their centers (not always visible) indicating beetle entrance activity into the host tree. Successful beetle mating indicates that the monogamous pair has overcome the host tree’s resin or pitch response to insect borer damage (Johnson and Lyon 1991; Cranshaw, 2004).

Mayfield and Foltz (2018) describe the black turpentine beetle life cycle after mating inside the tree. Once the female has mated she spends close to two weeks feeding on phloem tissue and constructs a brood (egg laying) gallery where she can lay close to 100 eggs positioned along one side of her chewed out brood gallery or chamber. The brood gallery starts out as a horizontal , shallow excavation or depression in the phloem and partial surface of the xylem (sapwood). In time, with more excavation, the brood gallery is extended downwards as the female chews out more phloem while laying her eggs. The final brood gallery looks similar to the number 7 or an upside-down letter J.

When eggs hatch, the first instar larvae bore their own tunnels as they feed and grow. All larvae are white colored, legless with brown head capsules, and feed in close proximity to one another contributing to phloem destruction. The larvae reach a stopping point from feeding and growing and begin to create pupation cells with their chewing mouthparts – one for each larvae. After pupation, adults emerge and chew or bore their way to the outside of the tree and fly to other suitable hosts nearby (Smith, 1971; Mayfield and Foltz, 2018).

Adults of both species are attracted to the lower four feet of trunk and root collar area of white pine and other evergreen hosts. This is where you want to focus your attention for detecting pitch masses. Adults are attracted to the white pine’s volatile odors emitted into the air from pines under stress. Stresses can be both environmental and biological. For example, many stresses include prolonged drought; prolonged flooding; air pollution; road salt; road construction, which includes root severing and soil compaction; lightning strikes; foliage and root diseases; and other insect pest attacks. Do not pile evergreen branch cuttings at the base of your white pine because this action can attract beetles too.

Mayfield and Foltz (2018), state that low beetle population levels will kill limited sections of phloem tissue, but repeated beetle attack over several years in a row, is the main culprit that weakens the trees resulting in their death. 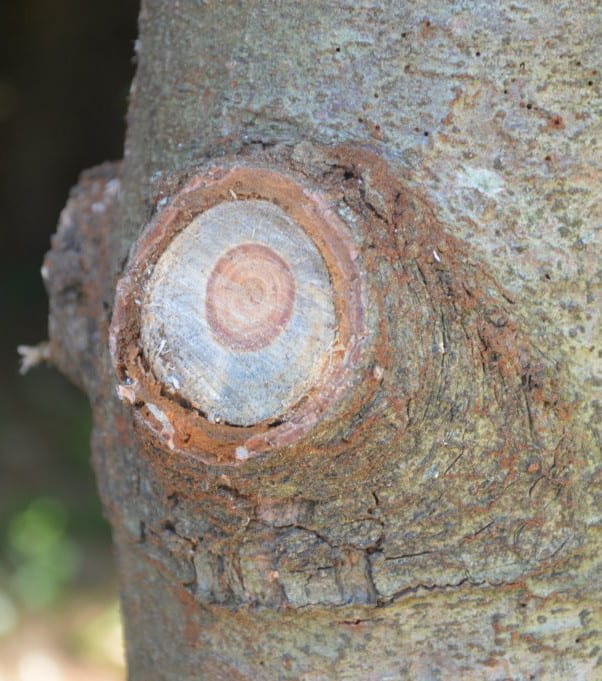 Figure 4: When I began to cut down this infested tree, I saw the telltale signs of blue stain fungi associated with turpentine beetle activity. This blue stain is evident in a cut branch stub. Photograph was taken on July 7, 2018.

Blue stain fungi are commonly seen in cut branches (Figure 4) and freshly cut stumps (Figure 5) as a result of beetle activity. Blue stain fungi are vectored (i.e. transported) into the tree by the adult beetles. The spores of the fungi are on their bodies and possibly in their mouthparts and are picked up by the beetles from other blue stain fungal sources in the environment.

Blue stain fungal spores, once introduced into the white pine, reproduce in sapwood and spread using the tree host’s moisture in the water conducting vessels in the xylem (sapwood). The fungal spread contributes to decreasing resin flow and possibly clogging water conduction vessels from the roots to the foliage. However, death of the tree host by turpentine beetles is mainly attributed to consistent and successive phloem destruction over the years, which can also contribute to the decrease in sapwood moisture content (Smith, 1971; Mayfield and Foltz, 2018; Johnson and Lyon, 1991). 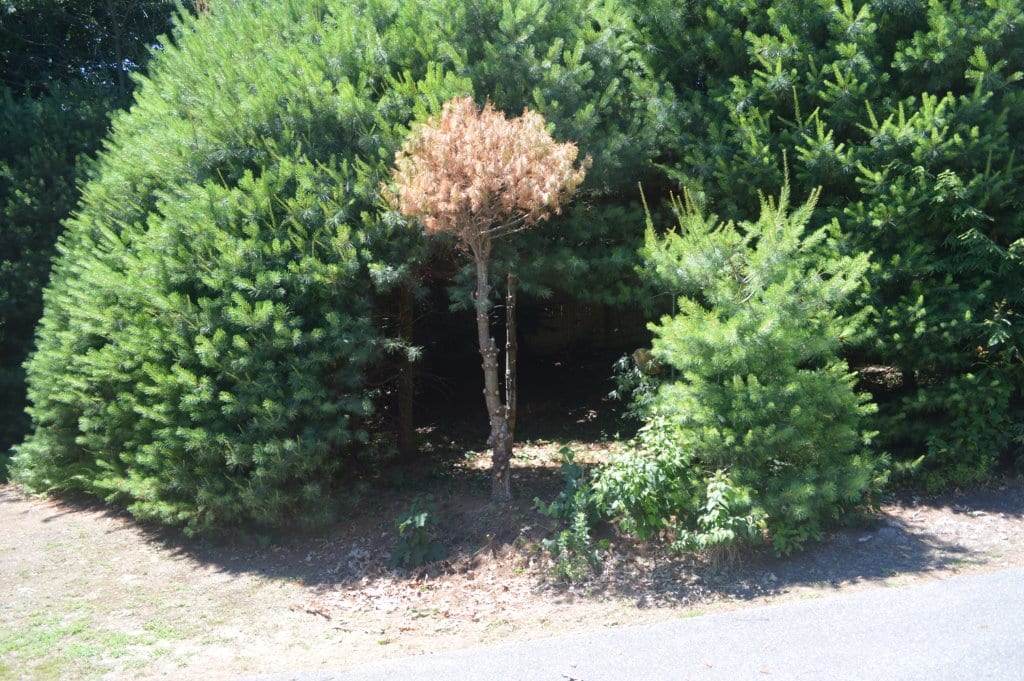 Figure 6: By July 7, 2018 it was time to remove this tree. I removed the branches prior to cutting the tree down as close to the ground as possible.

The second symptom of turpentine beetle attack is the gradual discoloration of white pine foliage or needles. The tree may turn a light color of green to green-yellow and stay that way for one to three years depending upon the size of the colonizing population (Figure 6). However, when the tree finally weakens to the point of dying, the foliage will turn quickly from light green-yellow to brown and the needles will turn downward (Figure 7). 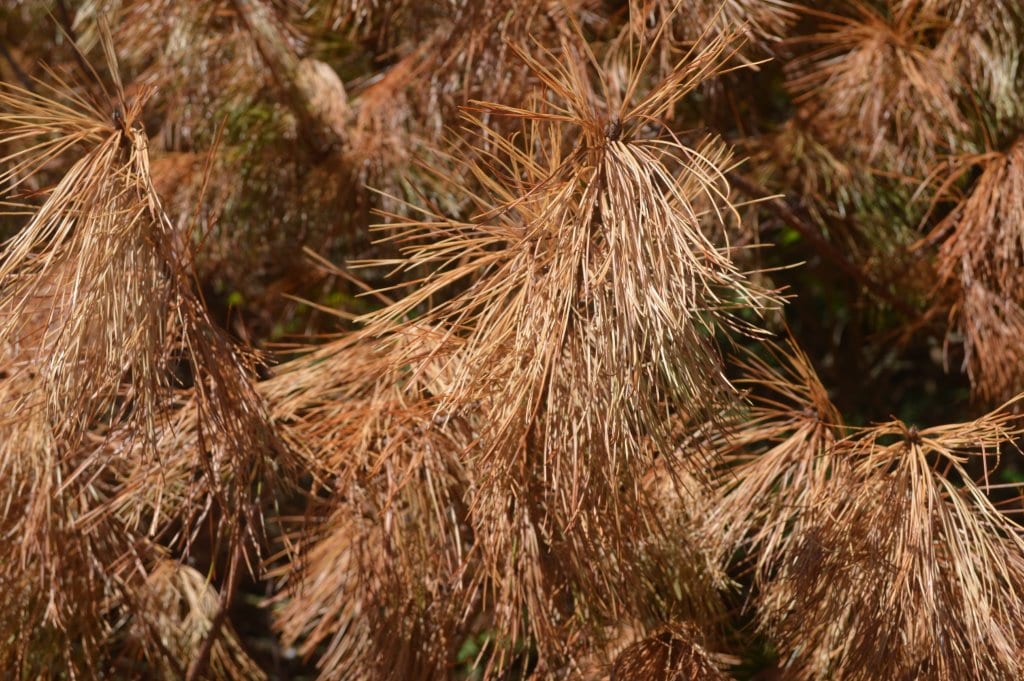 Figure 7: This is a close up of characteristic needle browning. White pine needles turn downward in response to turpentine beetle infestation. Internal tree moisture and sap has slowed considerably resulting in tree death.

Once your tree has total foliage discoloration or has died from either the red or black turpentine beetle attack, you should cut it down as close to the ground as possible. Remaining white pines can be protected by practicing good cultural controls such as keeping your trees watered during drought and maintaining the proper fertility suggested by the results from a UMass soil test (http://ag.umass.edu/services/soil-plant-nutrient-testing-laboratory). Mulching the roots of trees, especially those that are close to driveways and streets, will help retain soil moisture and help alleviate unseasonable soil temperature fluctuations that contribute to root death.

The best defense is to protect your white pines from mechanical damage, such as recreation and construction activities that cause branch breakage, bark damage, root damage, and soil compaction, all of which increase pitch production and or volatile tree odors that may attract adult beetles. Note that repeated branch pruning to control white pine growth for ornamental settings may attract these beetles, especially when combined with environmental stresses. Your aim is to keep your prized white pines in a stress-free state.

White pines that have a high ornamental value can be protected by the application of insecticides for bark beetles in early May (Norton, 2016). Insecticides labeled for these specific pests vary. You should consult with a certified arborist for chemical control options for bark application to branches and trunk.

Bruce Wenning has been on the ELA Board of Directors since 2003. He has university degrees in plant pathology and entomology and is the horticulturist at The Country Club in Brookline, Massachusetts. Photos were taken on a small estate in Harvard, MA.