By Maureen Sundberg on December 15, 2019 in Managing Water in the Landscape, Stormwater Management

This article is reprinted with the permission of the author and Ensia.

In Lafayette, Indiana, six people spent half the summer of 2019 hand-sweeping a road. That’s not how the city typically cleans its streets, but in this case, the road was permeable pavement, which puts gravel in between the pavers to let water filter into the soil below. Sweeping by hand was necessary to get the loose gravel back between the brick pavers after cleaning, says Vanessa Rainwater, the city’s green infrastructure manager. The process was time consuming, but was the only way to remove debris without damaging the underlying drainage system, she says.

While Rainwater has another, more efficient sweeping method lined up for next summer, her year as the city’s first supervisor overseeing water-absorbing infrastructure installed as a climate adaptation measure has shown her several other ways Lafayette can improve how it cares for such installations. “It’s been a year of trial and error, for me and the city, and we’re still figuring out how to do all of this,” she says. 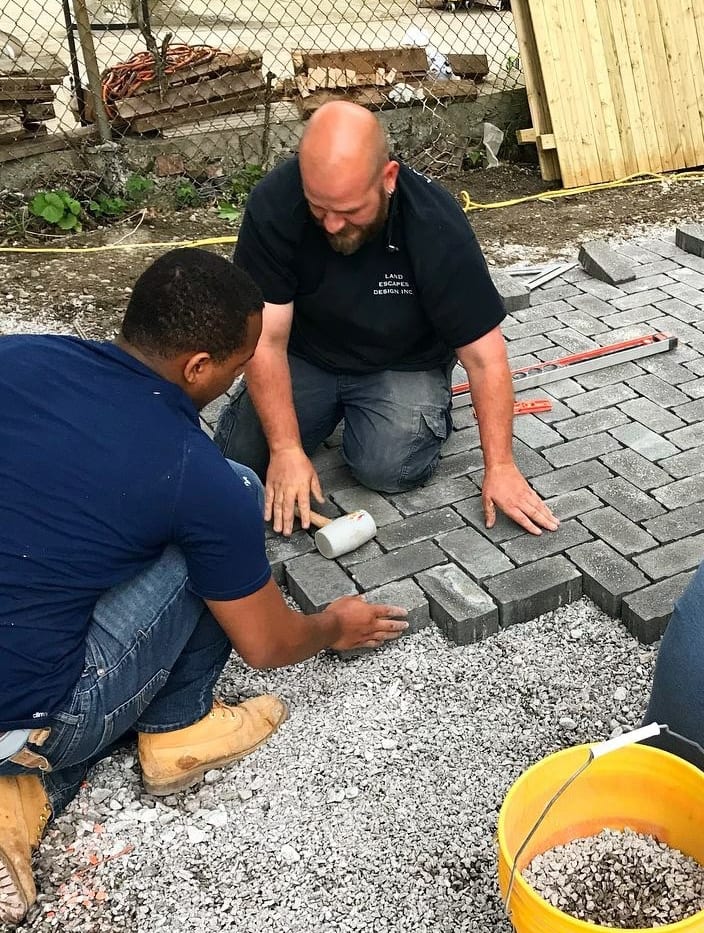 Other cities building similar stormwater management tools are reaching this conclusion, too. The U.S. Environmental Protection Agency (EPA) defines green infrastructure as an installation that “uses vegetation, soils, and other elements and practices to restore some of the natural processes required to manage water and create healthier urban environments.” Things like porous parking lots, wetlands, green roofs and rain gardens can help reduce flooding in neighborhoods and on roadways. Cities from Philadelphia to Detroit to Atlanta are installing green infrastructure.

The success of these installations, however, hinges on vegetation and underlying filtration systems being in good shape — a status that has been surprisingly difficult to achieve. And the concern is, when people see botched care as a failure of the installations, they’re tempted to think green infrastructure can’t improve their town, says Lucy Joyce, a former landscape architect supervisor who worked with the Nevada Department of Transportation to implement sustainable roadside development. “But in reality, it would work if you had the proper training or knowledge,” she says.

To ensure green infrastructure has a long future, experts like Rainwater are tackling the maintenance needs of the installations as they arise — often as surprises — and are working to formalize project care as an official job.

Most stormwater in the U.S. drains into underground pipes that dump into rivers, lakes or the ocean. But heavy rains — which climate change exacerbates — can overwhelm the system, flood streets and sometimes wash raw sewage up to the surface and into waterways. Green infrastructure reduces the overflow by keeping water in place for a while, explains Lisa Merrifield, a community and economic development specialist with the University of Illinois Extension. Rain collects in the gravel and gardens and trickles into groundwater, from which the U.S. sources about one-quarter of all freshwater used in homes, industries, agriculture and more. The slow filtration can even remove pollutants like heavy metals that rain collects while running over pavement. 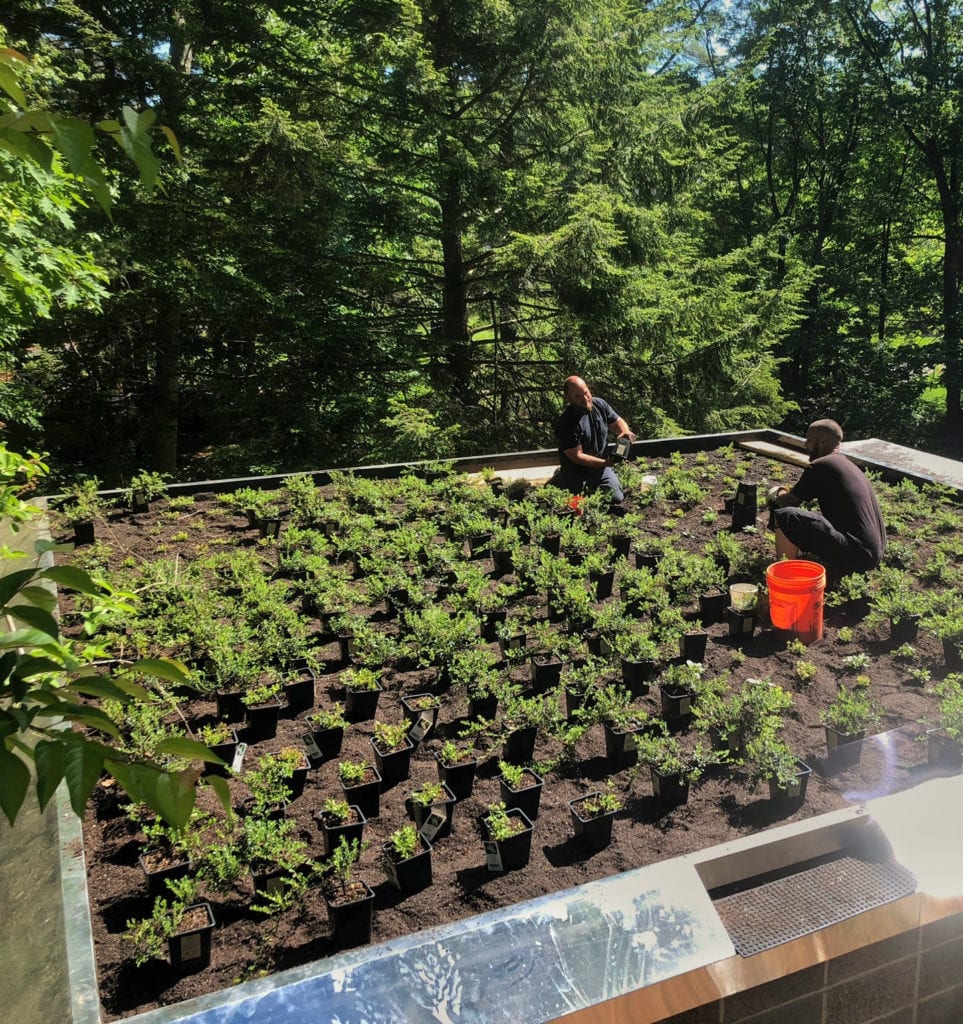 Because green infrastructure is relatively new, dating from the 1990s, landscape crews do not always have the skills required to successfully install and maintain systems.

While green infrastructure promises such benefits, administrators, engineers, maintenance crews and more are still learning how to ensure the installations deliver. Versions of concrete sanitation pipes have been around since the late 1800s, and their construction is tried and true. “Everyone knows what to do, who is responsible, ba-da-boom,” says Joyce. But experimentation with some green infrastructure only began in the 1990s. Some versions are living systems that need specific care that people’s formal training as architects, engineers or landscapers likely didn’t prepare them for.

Joyce figured this out when interviewing state transportation department employees from around the country for a July 2018 report she co-authored as part of a National Cooperative Highway Research Program project. Several agencies had planted swathes of native plants to absorb water on roadsides, but some never worked as planned.

Joyce found that administrative employees often assume that highway maintenance crews know how to care for them. But the workers don’t have experience with native plants. Crews might think they’re weeds and pull them out or mow the field as if it’s grass — chopping down the greenery before it drops seeds to regenerate next year. Or, because their primary responsibility is roadwork that ensures driver safety, the maintenance crews might prioritize problems like potholes. Drains on retention basins, or artificial ponds that hold runoff, might take too long to get unclogged, says Joyce. These issues can be compounded when a highway project is federally funded, because those allocations don’t set aside money for long-term maintenance. Localities assume existing workers can handle green infrastructure care despite their already full schedules. 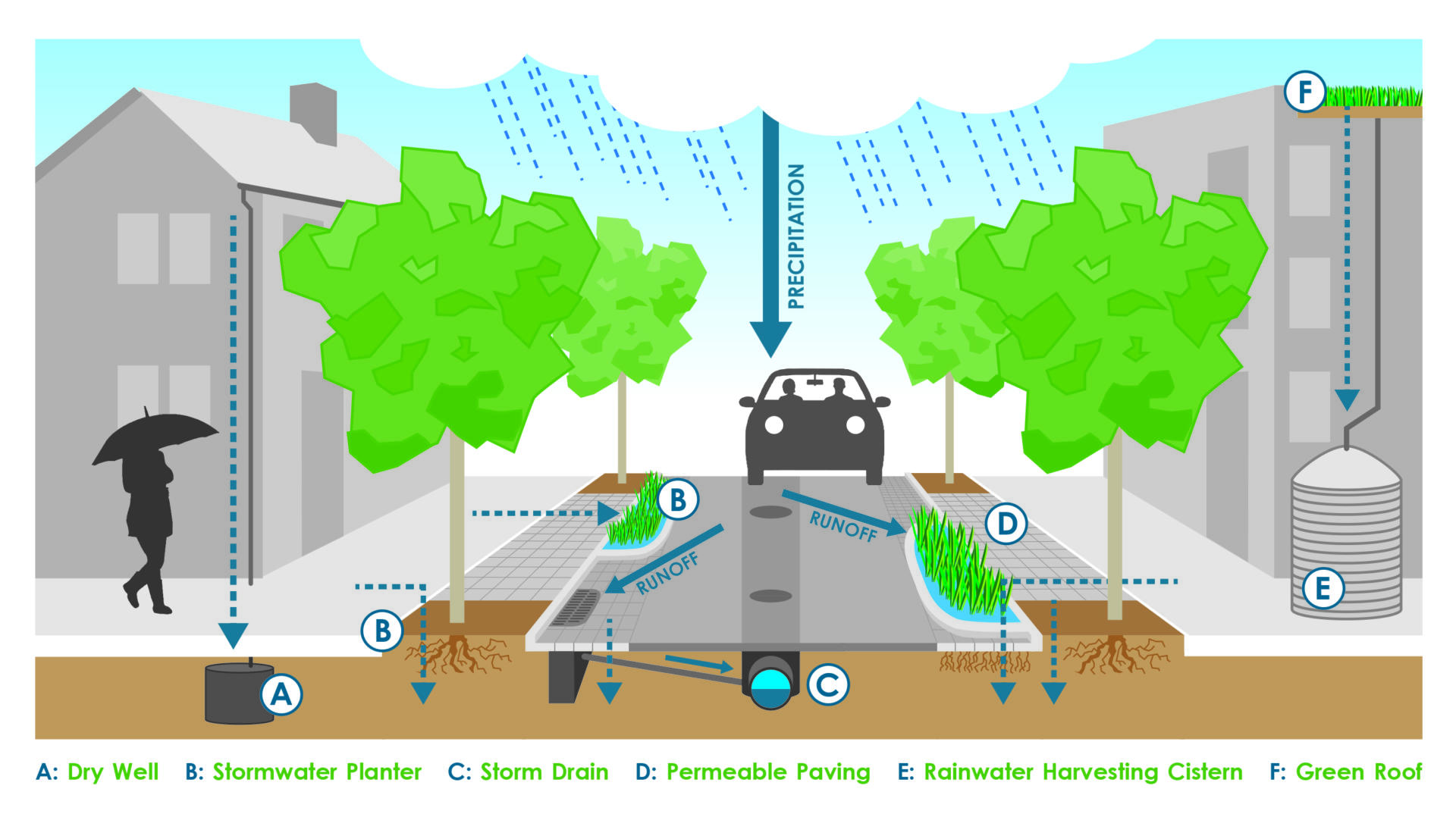 Green infrastructure can take many forms to allow water to filter into the ground in place, helping to reduce flooding and pollution. Illustration courtesy of The City of Atlanta Department of Watershed Management.

Installations also struggle when planners don’t think far enough ahead about what conditions the project might encounter. For example, in Lafayette, road salt for de-icing streets hit a highway rain garden hard last winter: Half the plants died after soaking in saline slush. Now, Rainwater is replanting the site with more salt-tolerant options.

Some ways to improve green infrastructure care face obstacles because of other regulations and procedures already in place. Highway engineers rely on the “Green Book,” published by the American Association of State Highway and Transportation Officials, to guide them through the best road construction protocols — but green infrastructure isn’t in the manual, says Joyce. Meanwhile, when companies vie for a construction jobs in Lafayette, the city tries to take the lowest bidder while also ensuring the winner can actually do the job correctly. But, in one example gone wrong, the city contracted a company to build a rain garden, but the company had never built one before and chose plants that bent over into roadways and were too hard to care for, so the city had to tear it out.

Rainwater’s work to keep these installations from failing makes her one of the first members of a budding profession: Green infrastructure maintenance. Lafayette is likely the first city to hire a manager specifically for this task. The city has many kinds of green infrastructure, including 10 miles (16 kilometers) of bioswale, or shallow depressions full of greenery, says Rainwater. When officials realized they needed someone to rehabilitate some of the struggling projects, they brought in Rainwater.

Other towns are watching to see if they should hire someone similar, and it’s a little nerve-wracking, Rainwater says. “The whole state is looking at me. 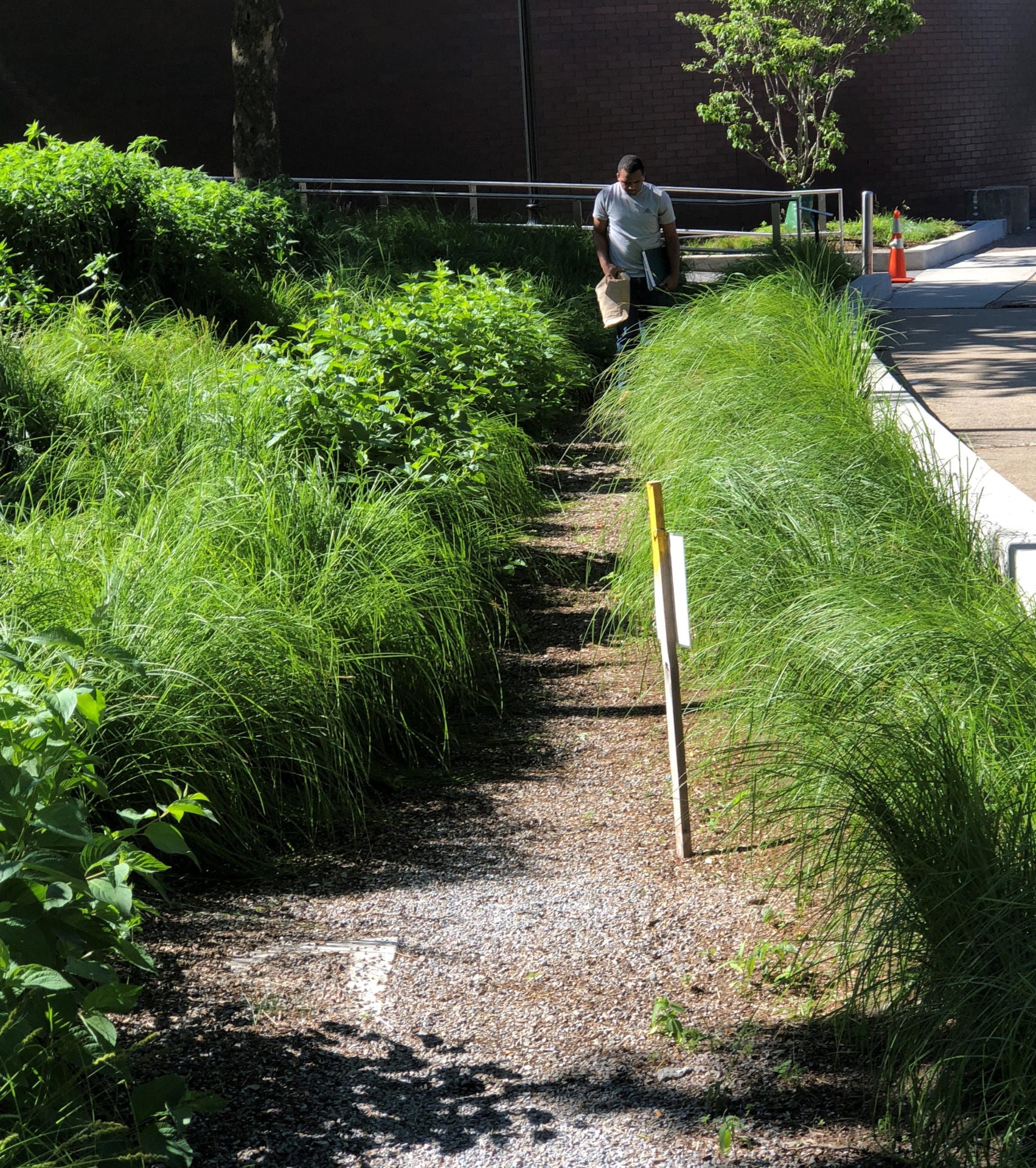 The National Green Infrastructure Certification Program offers classes and a certifying exam to train a workforce on green infrastructure design and maintenance.

She’s also one of 545 professionals carrying credentials from the National Green Infrastructure Certification Program. Run since 2018 by the Water Environment Federation, a nonprofit network of water professionals, the classes and certifying exam are a nationwide effort to standardize knowledge about green infrastructure design and maintenance, says Adriana Caldarelli, the certification program director. The lessons teach hydrology, how to read maintenance plans and the ways construction protocols can be adapted for green infrastructure. While it might be okay to be off half an inch (a centimeter) when leveling ground for other projects, for example, “with rainfall, half an inch can mean rain doesn’t get into the system,” says Caldarelli.

Since the credentials are optional, the program is not an accurate assessment of who has or wants to have jobs in green infrastructure maintenance. Merrifield is trying to piece together what the workforce might look like by surveying what career paths are opening up. With help from the Great Lakes Sea Grant Network, she and collaborators from seven other Midwest states are reaching out to universities, extension programs and non-governmental organizations to see what kind of local interest is brewing in this profession. They’ll also take regional community leaders out to lunch to discuss how to recruit and train green infrastructure workers.

An important part of these conversations, Merrifield says, is how municipalities can make their green infrastructure workforce diverse and inclusive. Like other city greening programs, these garden or parklike installations raise property values, which price out low-income residents. “That’s another way green infrastructure can fail, where you end up harming the people you’re trying to help,” says Merrifield. Anecdotally, she’s heard of some city programs interested in recruiting underemployed residents, and Caldarelli says Chicago and Milwaukee enroll city workers in the certification program to boost their earning potential. With funding from the U.S. Forest Service, Jobs for the Future, an employment development nonprofit, estimated the median green infrastructure employee earned almost US$16 an hour in 2015, and Merrifield suspects more salaried positions like Rainwater’s will appear, too. “That’s a job that probably wouldn’t have existed five years ago,” she says.

Depending on who you ask, a boom in green infrastructure installations may or may not be imminent. Merrifield sees the new generation of city employees who have grown up with climate change as eager to make strategies like green infrastructure work. Joyce is still waiting for roadway engineers to see green infrastructure as the primary, not secondary, approach to stormwater. What might be holding them back is hesitancy about how to care for the projects, she says.

To Caldarelli, getting it right isn’t just motivational. It’s something owed to communities. “If we want the multifunctional benefits that everyone loves green infrastructure for,” she says, “we need to make sure we are doing everything we can to ensure public money is being well-spent.”

Editor’s note, 11/1/19: The story was updated to better describe the process of cleaning permeable pavers.

Leslie Nemo is a freelance science journalist based in Michigan. Her reporting on everything from hemp farms to cactus transplants has appeared in publications like Scientific American, CityLab, Undark and more.