By i.am.georgia.harris on November 15, 2020 in Designing Ecological Landscapes, Native Plants

An Argument for Dropping Time and Place When Determining Native Ranges 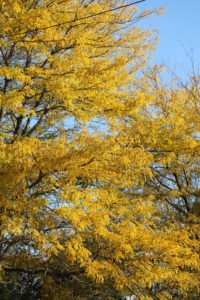 Gledistia tricanthus (honey locust) commonly thought to be native but would not be considered native with our traditional definitions of the word native.

There are as many definitions of ‘native’ as there are species of Carex in New England (195 species the last time I checked). The recent interest in ecologically-minded landscapes has created a growing interest in native plants; more people are asking for them at nurseries, more people are speaking about their benefits, and more people have been arguing about whether or not a specific species is native.

To simply state a plant is native is to make certain assumptions, and qualifiers are needed in order to make the statement. Those qualifiers often come in the form of time and place. For example, one might hear that red maple is native to the state of Massachusetts having been present in the state before European settlement. Thus, the time is the pre-European settlement and the location is the state of Massachusetts.

In America, nativity is often determined by pre-European settlement. This effectively draws a line between plants that have been moved around naturally and plants brought across the ocean by humans. Under this definition, we usually consider the movement of plants by the indigenous peoples of America as natural vectors and a species such as a sunchoke (Helianthus tuberosus) could be considered native to New England because sunchokes were brought to the New England area through trade before the European settlers arrived. Using this timeline for the determination of native draws a hard line in the sand stating that nothing can be native if it wasn’t in place before a specific date. 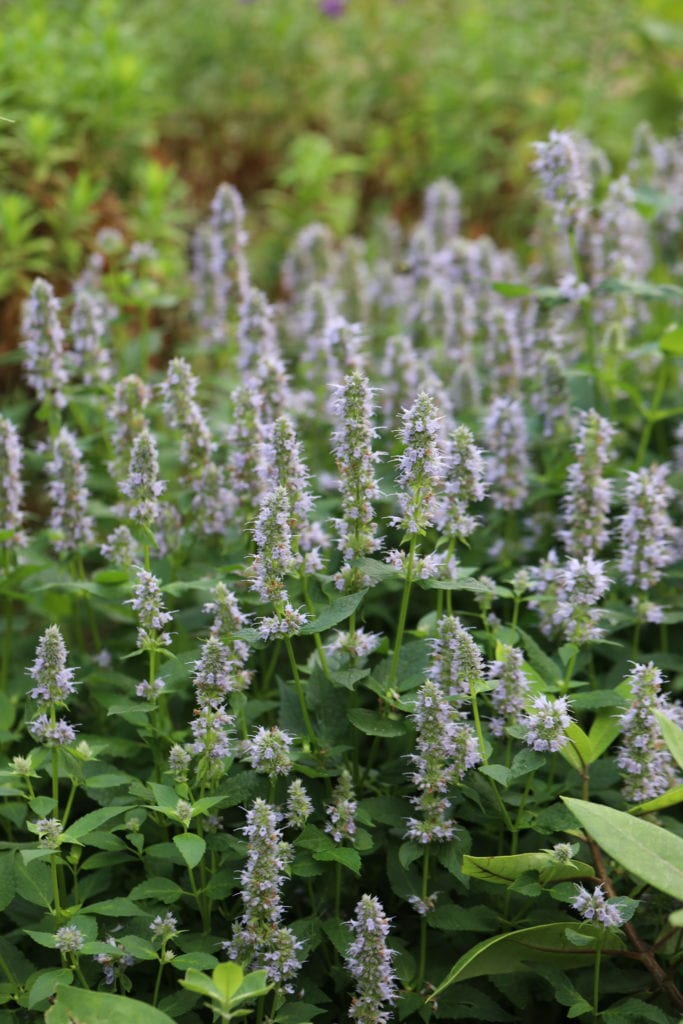 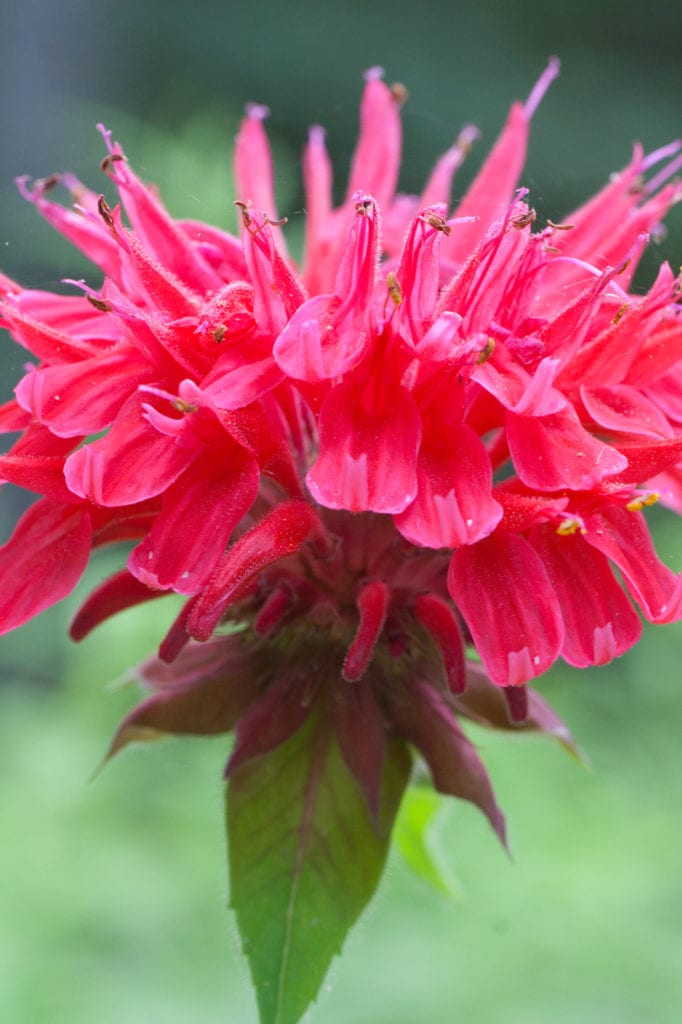 Monarda didyma (bee balm) is a quintessential native plant for New England Gardens despite the fact that the closest naturally occurring populations occur in New York.

There is a major issue with this hard-line approach: it takes human interactions on the landscape out of the definition. Humans have altered the faunal makeup of our landscapes both by fragmenting the landscape (making it harder for plants to migrate successfully) and by moving plants great distances intentionally through agriculture and horticulture, but also accidentally. Additionally, plants continue to adapt and evolve and this hard line does not take plant evolution into account. It would not be accurate to label the European crab apple (Malus sylvestris) native in America at the moment but what about in 1000 more years? 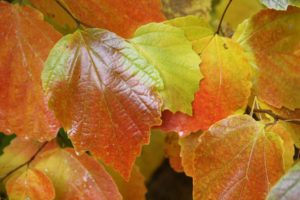 Fothergill major is thought to be native in New England but its native range is Southeastern US.

In the past, nativity was often defined by state lines (or for that matter county lines, or a region defined by multiple states, etc).  The work being done by state natural heritage programs gives this approach merit but it has some very distinctive drawbacks. Plants really don’t care about political boundaries and there are innumerable instances of a species being ‘native’ in Massachusetts, Connecticut, and yet non-native in Rhode Island.

Once we bring cultivars, forms, assisted migration (either of rare species for conservation purposes or of common species for horticultural purposes) into the mix, a definition of native becomes even hazier.

So what is the solution?

Turn the issue around and defining native may start to become a bit more clear. Those individuals interested in planting native plants are doing so for a specific reason. Whether the focus is pollinators, wildlife, or ecological function, it’s all about building habitat. Can we use that goal to determine what we mean by native? Can we use ecological interactions to determine native instead of time and place? In Doug Tallamy and Rick Darke’s book  The Living Landscape, they defined native as:

A plant or animal that has evolved in a given place over a period of time sufficient to develop complex and essential relationships with the physical environment and other organisms in a given ecological community.

Throw something like purple loosestrife into this definition, and it clearly falls off the native list. Though purple loosestrife is a source of pollen for some visiting bees the interactions are neither complex nor essential. Throw red maple into the definition, and we can start looking at the approximately 279 species of caterpillars who will feed on its leaves –  interactions that are indeed complex and essential. We can check this definition by comparing it to older definitions using time and place. Bald cypress (Taxodium distichum) is a good example. Here in New England, there are no caterpillars who will host on the foliage, and yet in South Carolina, there are 17 different species who feed on that same foliage. 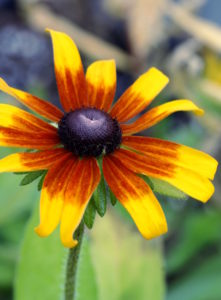 Black-eyed Susan (Rudbeckia hirta) is a common species included in New England meadows despite only occurring in the midwestern United States. There is a subspecies of black-eyed Susan (ssp. hirta) which is present in western VT and MA but this subspecies is not the one found in cultivation.

The Tallamy/Drake definition can be quite illustrative when we start comparing various species to each other. Blackgum (Nyssa sylvatica) is native to Massachusetts no matter what definition of native you ascribe to; here in MA, it supports 25 different lepidopteran species. Sweet crabapple (Malus coronaria) reaches the northern limit of its range in New York, it doesn’t occur naturally in New England at all, and yet here in Massachusetts it hosts 291 different lepidopteran species. When we start looking at ecological interactions it becomes clear that an overly-restrictive view of native does a disservice to the goals of ecological landscape design.

When we bring our modern landscape challenges into the equation, we find this definition of native is better suited to the real-world problems we face. For example, trying to find trees for some of our more challenging urban settings (say a tree pit in the middle of the city) where compaction, pollution, and size limitations are all common. It is frustrating when species such as honey locust (Gleditsia triacanthos) is removed from the northeastern lists because they do not fit a narrow view of native. This is a species that thrives in challenging conditions and easily fits into the definition of native when we start looking at things from an ecological perspective. Honey locust provides host sites for 34 species in Worcester, MA despite a natural range that peaks roughly 300 miles southwest of the city.

If our goal is building habitat through the use of native plants then let that goal drive the work. Minor arguments over range maps and dates rarely offer much value when trying to turn a lawn into a meadow or planting a new tree downtown. 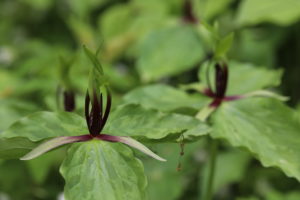 Trillium viride (Green trillium) is much loved by native plant gardeners and holds a special place in woodland gardens. It occurs naturally only in Missouri and Illinois.

Photographer and author Dan Jaffe Wilder has over fifteen years’ experience with ecological horticulture. He is a propagator of native species, the photographer and co-author of Native Plants for New England Gardens, and a lecturer on numerous topics including pollinators, sustainable landscape practices, foraging and cultivation of edible species, low-maintenance horticulture, among others. He has developed a native plant horticultural database (https://plantfinder.nativeplanttrust.org/Plant-Search) and has years of nursery management experience. He earned a degree in botany from the University of Maine, Orono, and an advanced certificate in Native Plant Horticulture and Design from Native Plant Trust (formerly New England Wild Flower Society). He is the Horticulturalist and Propagator for Norcross Wildlife Sanctuary in Wales, MA, and is currently building his own home-scale homestead, growing and foraging numerous edible species, preserving and cooking whenever possible, and raising small animals.

More than Pollinator Friendly
As Things Always Change, the Nature of Nature Remains the Same