By ecopro on November 14, 2012 in Landscape Design

As a gardener, I am afforded a lot of design input as I care for gardens: re-doing beds, planting annuals and bulbs, and festooning containers come to mind. The gardening season is busy, but alongside my horticultural duties, I also take on several design projects just to make sure that I don’t have a single moment to myself. This season I was kept extra busy with some fun design challenges. 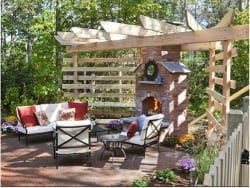 Episode 101 of ‘Going Yard’ was the first episode for everyone on the crew, so we were all feeling our way. The garden was built in five days, for a couple with a young son and a small dog in an area visited frequented by coyotes. Needless to say there was a fence in that project. It also included a fireplace, a double deck, and a natural play area inspired by Natural Playgrounds of Concord, NH.

During the fall of 2011, I received a surprising phone call – from Hollywood! Magnetic Productions, a TV production company, asked me to design a few episodes for a new landscape makeover show called Going Yard for HGTV. I did two designs for them last fall, for new back yards on Cape Cod, and then three more episodes for the second season of the show, also filmed on the Cape, this season. Unfortunately, as a ‘ghost designer’, I do not get credit on the show for my design work. It may be for the best, however, since each garden has to be built in five days, there are often changes that are out of my control. In one episode, an unusual wave-shaped fence that I designed was built as specified, but then painted pink. 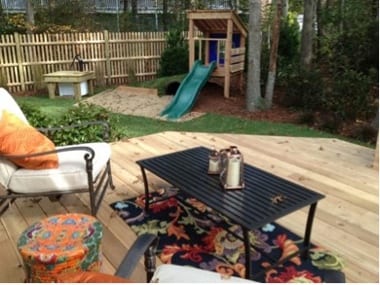 The Natural Play area included a play mound, a water pump with a sluice, a balance beam made from a log, etc. Sadly, many of those features were eliminated or simplified. Since the producers are not focused at all on ecological issues, I do ‘sneak’ in many plants native to the area (Ilex glabra, Ilex verticilata, Eastern White Pine, and Gaulteria procumbens for a ground cover, and they were not axed! 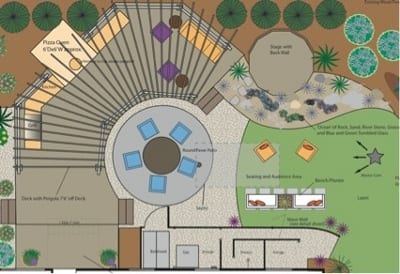 A part of the plan for an episode that was filmed this past summer and will air next summer. This garden included a stage for the singer/mom and a pizza oven for the chef/dad.

You can see more images of the first episode of ‘Going Yard’ (Episode 101) on my website and the other episode’s images will be posted as they air, in early 2013.

A project with a more typical client that spanned last season and this season was the design and installation of a garden in the fairly tightly developed suburban town of Melrose. I was hired to refurbish the overgrown side yard of an eighth of an acre plot, which had been neglected for many years. By the end of the design process I had convinced them to expand the project to the front yard, add a stone path (local stone) that would link the front, side, and back of the property, and best of all, remove all of the grass. 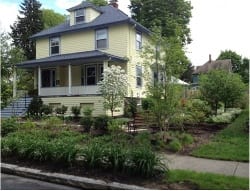 View of the front of the property, showing some of the native and non-native plants. The client really wanted crabapples (at right) and daylilies to be added to the planting design.

It was easy to convince them that it was a good thing to plant almost entirely native plants, as they are both bird lovers, and many of the plants would provide the butterflies and birds, (and the insects they eat), with food and shelter. I was unable to dissuade them of placing three crab apples along the property line, and a few other ‘exotics’, but I was able to place four other native trees on the site: Sourwood, White Birch, River Birch, and a new cultivar of the native Dogwood (Cornus florida ‘Appalachian Spring’) that is reportedly resistant to the anthracnose disease that can shorten the life of this sublime tree. 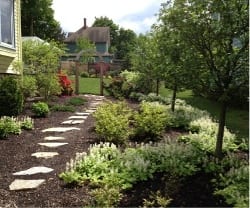 The crab apples on the right suffered a bad case of Apple Cedar Rust now under control after repeat applications of compost tea.

This project has been one of my favorites in recent years, because I was able to work with clients who were interested in the natural world. I was able to remove a great deal of lawn (they still have a nice, healthy lawn to roll on in the back garden), and I was able to use some plants in a fairly urban setting that I have not been able to use before (Pennsylvania sedge and Little Bluestem come to mind).

A horticultural note about the crab apples (on the right): shortly after we planted them a bad case of Apple Cedar Rust bloomed (it had come in from the nursery on the trees). Working in conjunction with the organic tree company, Boston Tree Preservation, we applied compost to the base of the trees, and they sprayed three times during the season with compost tea, once at leaf break, and then twice more, each a month apart. Careful clean up this fall and another application of compost should keep the microorganisms in the ground munching away at any remaining spores. We were able to gain quite a bit of control over the disease this season, and will continue with this treatment next season. 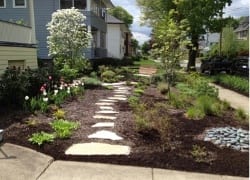 I can’t wait until the engineer half of the couple installs his Surprise Fountain (seen on the right) next to the sidewalk, where a sphere of water will shoot out of the ground at random times to delight passers-by.

2012 has been a great season, replete with mild weather, reminders of the complexity and inter-connectedness of the natural world, and new design experiences. I consider myself lucky to be doing what I love for a living. To all you fellow gardeners and designers: have a peaceful, restful, restorative winter.

Darcy Paige is the owner of Laurel Garden Design and has worked designing, installing, and maintaining gardens for over 16 years. A Certified Landscape Designer, Darcy is an accredited Organic Land Care Professional with Northeast Organic Farming Association. She may be reached at laurelgarden@verizon.net.

With special thanks to Thomas Thiers who never misses a beat with the camera.