By ecopro on November 14, 2012 in Landscape Design, Landscape Maintenance

I’ve been designing, installing, and tending gardens for 16 years. About two-thirds of my time each season is spent in gardens, with my trusty, dusty team. Each season has its own quirks and personality; like cream rising to the top of the milk, rich images separate themselves out from the jumbled memory of the season’s seemingly endless tasks.

Since I split my time between design and maintenance, I have two sets of experiences each season: horticultural and creative – with a lot of overlap in each group. Here are a few highlights from our 2012 season.

Weather sets the tone for the growing season, and this year was incredible in that department. March was warm, with very few nights below 32 degrees. If only I had scheduled that shoulder surgery earlier! Alas, by the time I got rolling, the gardens were growing like mad. 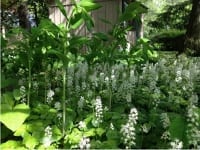 This was taken early in May, several weeks before we usually see the Tiarella like this!

April continued the mild trend, May was lovely, and then June offered five days with temps above 90! While the beachgoers and the vacationers were enjoying themselves, we were suffering in the heat and humidity of hotter than average months of July and August. 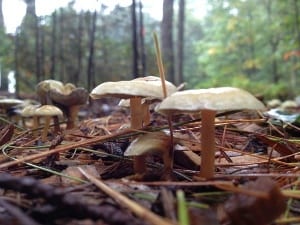 Fall is such a soothing relief after the summer, and we cherish every minute of the mild temps, the colors, and lower angle of the sun, lighting up the colorful shrubs, trees and grasses from behind, making them glow like jack-o- lanterns. Here are a few of the many mushrooms we see in the gardens during the fall.

Because it has been a long, mild season, the amount of biomass produced during the 2012 growing season was remarkable. I and my team worked like mad during the summer months to keep up with pruning. 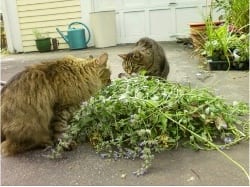 We frequently prune whole hedges by hand, carefully cutting deep into the shrubs to ensure that light gets into the interior. This kind of intensive handwork is necessarily more expensive for the client than shearing, but yields beautiful results both to the eye and the health of the plant. But, “Holy Felcos, Batman!” it was hard keeping up with the growth.

With a warm year, a fairly good supply of rain, more clients getting drip irrigation to their containers, and a talented team, we had a lot of fun with containers this season.

Note to myself: next season explore doing some containers with just native plants. 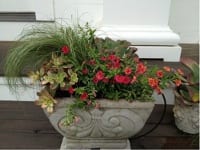 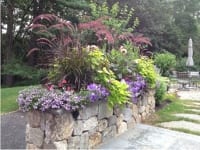 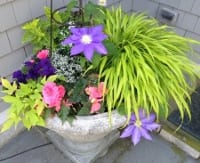 Because many clients are challenged by the daily watering that containers require, those that are drip irrigated like the examples above, thrive nicely.

Watching Nature Do Its Thing 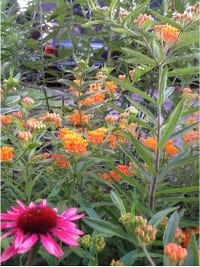 The rain garden before infestation. 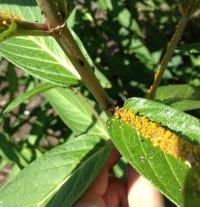 Aphids arrived and covered every stem!

As a NOFA OLCP, I do not use pesticides, and through the years I’ve been lucky not to have many pest issues to confront. I do run into the occasional aphid outbreak and when able (i.e. I have a willing client), I leave them alone (aside from perhaps a blast from the hose) and let the ladybugs arrive to lay the eggs of what will be voracious aphid eaters: ladybug larvae. This year an outbreak occurred on some milkweed at my own garden, in a small rain garden that I installed to receive the runoff from my driveway. It was a heavy infestation, covering the top half of all the stems. We let it be and let the ladybugs take care of the infestation.

We waited, and it wasn’t long before ladybugs arrived and laid their eggs. Soon the larvae were munching away. To accelerate the process, we brought in a bag of several hundred store-bought ladybugs and released them at night. They seemed happy enough, even munching on the aphids in the dark. But in the morning, they were all gone, except for two or three that stayed on. 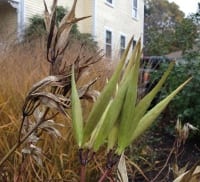 After about a month, the infestation was under control and the milkweed re-bloomed and set a good crop of seed pods.

In another garden, we had to weed out some milkweed that had come in from the meadow on the other side of the fence. We found quite a few monarch larvae on the milkweed. I brought them home and raised them in the kitchen, feeding them fresh milkweed from my own garden. 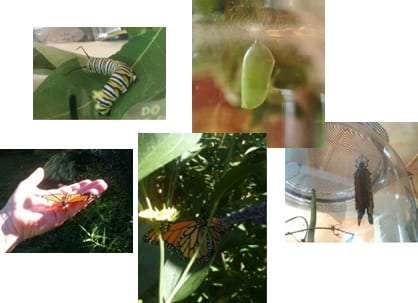 From my kitchen counter I watched as caterpillars ate, grew, and morphed into monarch butterflies. With a quick drink of sugar water and a few minutes to stabilize their wings, each butterfly was released in the garden, to start the cycle again. 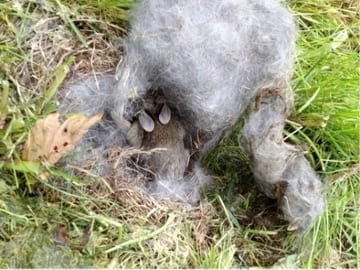 Baby bunnies! I found this nest while walking across a rather rough lawn at the recently purchased house of a client. At the high point of the lawn I saw what I thought was an outcrop of ledge. I kicked it (gently, thankfully) to confirm that it was stone and to my surprise it gave way to my foot. I saw that I had knocked off the top of a perfectly round ball of woven rabbit fur, and inside there were four tiny rabbits, all curled up together, and struggling to get away from the light. I marked it and informed the client so they would not get run over by the mower. Soon after, Momma Bunny moved the nest to the wooded area. In the picture above, you can make out the ears of the bunny on top of the pile of brothers and sisters. 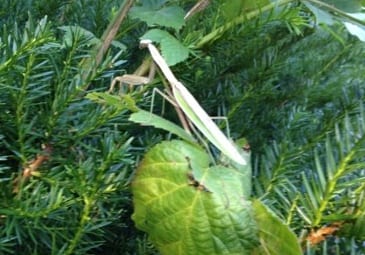 In August we found this beautiful Praying Mantis in a quiet corner of a garden in Weston, MA. 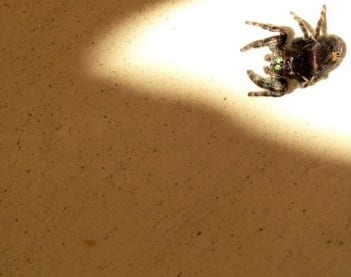 Phidippus audax, or the Jumping Spider, lives on my back porch. We leave bits of food to attract the flies that it loves to hunt. 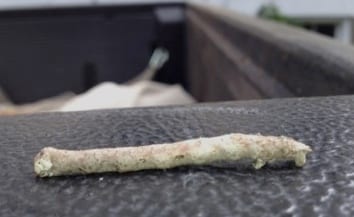 I found this Stick Caterpillar (Anavitrinella pampinaria?) on my blueberries. Don’t ask me how I saw it because it blended completely with the bush. It even stuck out at the same angle as the other branches! 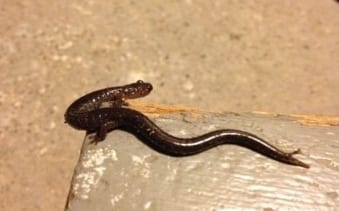 We’ve been happy to see quite a few salamanders in gardens this season. This one I found in my basement. We released it under some leaf litter by the back stonewall in my garden.

With the waning days of fall, I have 2500 bulbs to plant (Thank the Garden Gnomes that I bought a power auger years ago!), a hurricane to clean up from, and many clients to convince that leaving leaf litter – or better yet grinding it up and putting it back down – is the very best way to do a fall ‘cleanup’. As I work in the fall gardens, I see the huge fat worms and their castings everywhere, loosening and enriching the soil. I have had some success with a few clients, but many prefer a cleaner look. Note to myself: try harder to gently nudge the remaining clients! 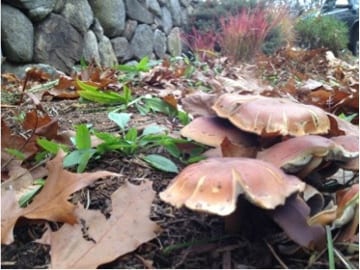 This fall we’ve seen many beautiful mushrooms among the leaf litter of the garden beds.

Darcy Paige is the owner of Laurel Garden Design and has worked designing, installing, and maintaining gardens for over 16 years. A Certified Landscape Designer, Darcy is an accredited Organic Land Care Professional with Northeast Organic Farming Association. She may be reached at laurelgarden@verizon.net.

With special thanks to Thomas Thiers who never misses a beat with the camera.