By i.am.georgia.harris on September 15, 2020 in Disease Identification and Control, Landscape Challenges, Pest Management

Not all plant diseases are caused by parasitic microbes

Not all plant diseases are caused by parasitic microbes, some are caused by parasitic weeds.  The dodder vine is one of those weeds. Dodder attaches itself to healthy plants and makes them more vulnerable to other diseases and insect pests. To help understand more about the fascinating parasitic dodder weed I will explain plant relationships and the conditions that are favorable for the dodder to survive. Best practices for ridding your landscape of this vine are included.

However, more recent publications have placed the dodder genus, Cuscuta, in its own family, Cuscutaceae. Therefore, I will follow the taxonomy presented by Magee and Ahles (2007) as follows.

If you are interested in pursuing the taxonomy and identification of the few dodder species inhabiting the New England states, the text Flora of the Northeast by Magee and Ahles (2007) is your best start if you are comfortable using botanical dichotomous keys. They provide a taxonomic key to the more commonly encountered species complete with range maps listing eight dodder species; five native and three introduced from Europe.

Other plant scientists report that there are between 150 to 170 dodder species worldwide (Sinclair et al, 1987; Powell and Linquist, 1992). 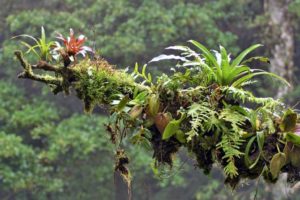 Commensalism is a type of symbiotic relationship where one plant gains some benefit(s) (the commensal) and the other (the host) neither benefits nor suffers any harm (Towle, 1989; Buchsbaum, 1957). Epiphytes are frequently cited as examples of this type of symbiotic relationship. Epiphytes or epiphytic plants use other plants for some type of support to further their life cycle. Epiphytes like algae and lichens are common in our temperate ecosystems but are more commonly seen in tropical ecosystems, particularly in rainforests as seen in figure 1. For example, the tropical trees that support specific orchids, bromeliads, and mosses (the epiphytes) high in their canopies allow these specific plants to gain more sunlight than they otherwise would when growing below the canopy level or on the very shaded ground (Towle, 1989). These and other similar epiphytes get their nutrients from rainfall, dew, mist, fog, and decomposing organic matter caught in trees providing a nutrient base for nutrient release. 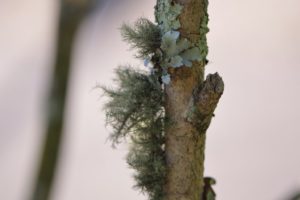 Figure 2. Lichen growth forms are separated into four categories; foliose, fruticose, crustose, and squamulose. For example, the shrubby lichen on the left is in the fruticose category, and the leaf-like lichen is in the foliose category.

Mutualism is another type of symbiotic relationship where two different organisms live together in mutual benefit (neither harms the other). Lichens, as seen in figure 2, and mentioned above, are frequently cited examples. In nature, lichen species are very widespread but unusual in that they are composed of two different but compatible organisms. One organism or component is a fungus and the other organism or component contains chlorophyll and is photosynthetic. Therefore, the fungus is referred to as the mycobiont and the photosynthetic partner is the photobiont. The photosynthetically active photobionts contain chlorophyll and are specific green algae or a particular cyanobacterium species.

How does this type of symbiosis work? The mycobiont or fungal part of the lichen is the visually distinct thallus or lichen body we all see when observing these “funny looking plants” growing on rocks, soil, tree bark, asphalt, gravestones, and other places. Figure 3 shows lichens specific to rocky ledges. The fungal component or lichen body (mycobiont) absorbs nutrients and water and the photobionts (photosynthesizing algae and cyanobacteria) that live inside the lichen body function to provide carbohydrates to both the fungal component and themselves (REA, 1999). 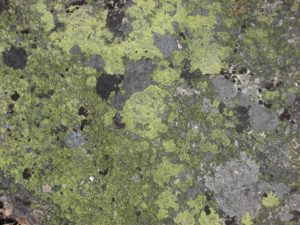 Figure 3. These rock inhabiting lichens are on a rocky ledge at the Humboldt Field Research Institute, Steuben, Maine. They form a colorful crust over the rock substrate.

This particular and some think peculiar mutualistic relationship, is very unique in the plant world because the fungus alone or the particular algae/cyanobacteria alone cannot colonize a suitable substrate by themselves and live independently (Purvis, 2000). Why? Laboratory experiments have proven that not all species of fungi or all species of algae can undergo the specialized compatible association necessary to form lichen. Fungi that can are called lichenized or lichen-forming fungi.

According to Brodo, Sharnoff, and Sharnoff (2001), lichen body shapes and forms are determined by the fungal component of this type of symbiotic relationship.

Brodo et al (2001), states that because lichens are composed of compatible fungal species with a compatible algal or cyanobacterium species they are determined to be dual organisms and therefore, very different from straight species of plants like red oak, eastern white pine, or American chestnut, etc., that have their own genetic makeup distinguishing them from one another as woody plants.

Parasites that are plants obtain their nutrient needs from another plant.  It’s that straightforward. They are not commensals like epiphytes nor are they mutualistic organisms like lichens. A parasitic plant uses its host plant in a long – term symbiotic relationship. The parasitic plant contains no chlorophyll. It cannot make its own food by way of photosynthesis. Instead, it has evolved to parasitize its supporting host plant to draw water and nutrients in order to stay alive and reproduce.

There are several flowering, seed-producing parasitic plants that are distributed around the world. Some important economic parasitic plants are in the following groups; broomrapes, witchweed, American (true), and dwarf mistletoes and dodder (Powell and Lindquist, 1992).

Dodder and the Disease Triangle

Dodder vines are classified as being a disease organism by plant pathologists and botanists. Plant diseases can be caused by an array of living organisms (e.g. parasitic plants, fungi, bacteria, viruses, etc.),  as well as by non-living events such as drought, low temperature extremes, poor soil conditions, and the like (Powell and Lindquist, 1992). 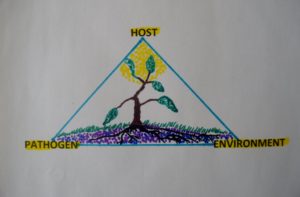 How a particular disease develops depends on three important factors; a suitable pathogen, a susceptible host, and a favorable environment. The plant disease triangle (figure 4) illustrates this point. It is commonly known by all plant pathology students and others working in the plant industry treating plants for diseases. For each disease causing organism(s) or environmental (non-living) events, the triangle helps determine and clarify the factors necessary for a disease to flourish, take hold and contribute to plant decline, even plant death (Ellis and Bradley, 1992). 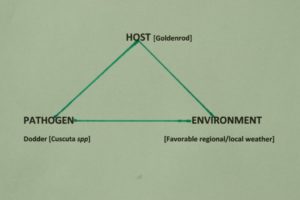 Figure 5 shows a generalized disease triangle for the dodder vine species I battle at The Country Club on goldenrod.

Dodder Vine Life Cycle; and a diseased condition in its host

Dodder spp. seeds drop from the parent plant or are deposited in the soil from the previous spring or summer, overwinter and germinate the following year. Depending on the species, seed germination can occur from April to October and some seeds can lie dormant in the soil for several years before environmental conditions are favorable for germination (Schrock, 2004). Dodders have reduced or scale-like leaves. 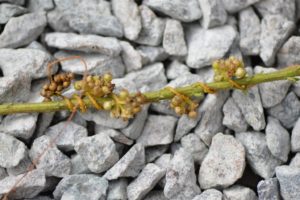 Figure 6. Dodder vine with seed capsules in bunches growing around a goldenrod (Solidago spp.) stem. Leaves of goldenrod were removed for the photograph.

When seeds germinate they form soil penetrating roots that support seedling – sized vines that are governed by strong phototropism and grow only upward on to their susceptible host in a counterclockwise growth habit (see figure 6) (Sinclair et al, 1987).  Attaching to a susceptible host while anchored by its own roots may take several weeks but when a susceptible host is found by way of water vapor gradients and volatile chemical attractants, vine modified above ground root-like organs known as haustoria, attach to the host and penetrate it along its stem. Haustoria are the specialized parasitic structures used by parasitic plants to draw water and nutrients from its host.

When enough haustoria (figure 7) penetrate the host plant stems, the dodder loses its root connection to the soil and they break off or wither away leaving the parasitic dodder vine flourishing, extracting sustenance from its host for continued development which includes growth, flowering, fruiting, and seed production for the next year (Sinclair et al, 1987). 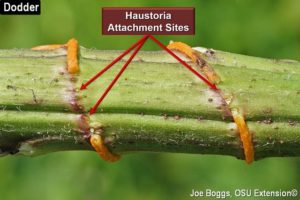 Figure7. Haustorium (plural is haustoria) is a specialized root–like organ used by parasitic plants to penetrate their host plants for the purpose of drawing nutrients. The attachment or penetration sites along the host plant stems are seen as dots under the dodder’s removed portion of vine stem. 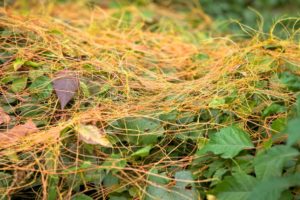 Dodder appears as a yellow-orange, leafless, thread-like vine that grows over its hosts’ leaves, branches, and stems as an entangled, smothering web (see figure 8).

It looks like a form of yellowish-orange angel hair spaghetti capturing your interest as you investigate by pulling it off or away from your garden plants. You will notice that it is attached by haustoria and combined with its twining nature, breaks off easily when pulled but the left behind portions are still viable and continue to grow and parasitize its host (Sinclair et al, 1987).

Host plants susceptible to this parasitic vine range from vegetable crops to ornamental and herbaceous garden plants; including some woody plants. The dodder vine is therefore a disease when it successfully parasitizes its host. Generally, host plants are weakened by dodder, not immediately killed.

When applicable, plant dodder resistant varieties, pull out vines before they flower, and continue to monitor infested plants to be sure you keep up with dodder removal.

Do not add dodder infested plants and soil to your compost pile because you’ll have a greater risk of contaminating clean garden areas with your own compost (Ellis and Bradley, 1992).

Remember, dodder seed can live in soil for several years until environmental conditions are favorable for germination. If left uncontrolled, dodder will spread farther and farther each year, producing seed for new plants and contaminating the soil seed bank as an endless disease to some of your desirable plants.

Dodder, as a parasitic plant, weakens its host plants making them more susceptible to other diseases, insect pests, and less resilient to bouts of drought, temperature extremes, and other environmental problems.