In southeastern New Hampshire, where I work with landowners and communities on land stewardship, managing invasive plants is a constant struggle. Lacking natural pest controls, these plants have adapted well to our soils; taken advantage of repeated land disturbances; hitched rides on mulch, gravel, and other materials; and benefited from an agricultural land-use legacy. The widespread presence of some invasive plants, such as autumn olive and glossy buckthorn, often overwhelms any desire to take action. To avoid invasive paralysis, I keep my focus on the goal: restoration of a place to a mostly self-sustaining, healthy plant community.

As the Land Stewardship Coordinator for the Town of Durham, I’m guiding three such restoration projects on town conservation land. Each has a slightly different land-use past, but all have a farming history. It was hard not to be overwhelmed by the pervasiveness of invasive plants on all three properties. One option was to do nothing. But without some intervention, every forest harvest, every cleared trail, every field mowing would lead to further spread of the invasives. And, as they say about some old houses, these sites had good bones.

The 87-acre Doe Farm was bequeathed to the Town in 1909, upon the death of Mr. Olinthus Doe. Within a few years, the farmhouse and barn burned, which began the property’s transition from fields and pastures in the early 1900s to the maturing forest today. The town manages this property as a tree farm with a focus on sustaining forest health and productivity while maintaining wildlife habitat and public trails and protecting the shoreline along the Wild and Scenic Lamprey River. By 2015, an unchecked dense stand of glossy buckthorn had spread throughout the forest understory. 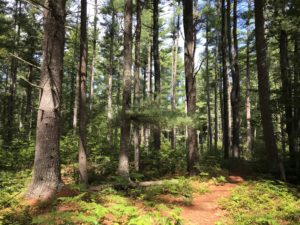 Durham, NH is managing its 87-acre Doe Farm with a focus on sustaining forest health and productivity, which includes controlling an understory of invasive glossy buckthorn, thereby allowing natural regeneration to thrive; this pine forest on Doe Farm is mostly free of understory invasive.

At Doe Farm, seedlings and saplings of native red oak, black cherry, shagbark hickory, black birch, and white pine –“the bones” – grow naturally beneath and between the buckthorn thickets. In 2016, we initiated a two-pronged approach to remove the buckthorn understory, thus releasing the natural regeneration potential of the property to grow into a healthier forest. Volunteers, interns, and town staff helped hand pull buckthorn seedlings as time and availability permitted, and they continue to pull seedlings every year. To reduce the buckthorn further, we engaged a certified pesticide applicator, in an ongoing four- to five-year effort to treat with a foliar spray the difficult-to-pull larger buckthorn plants (the seed sources) where they grow the most densely. These steps ensure that a planned timber harvest within the next five years can occur without resulting in a post-harvest explosion of buckthorn. 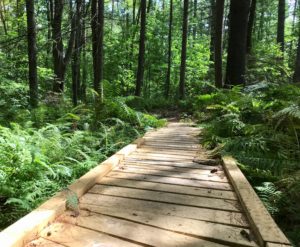 The other two project sites – 172-acre Oyster River Forest and 54-acre Thompson Forest – have a shared goal: encouraging a meadow/shrub/young forest habitat to benefit pollinators, songbirds, and the state-endangered New England cottontail. Farming – crops, and pasture, respectively – ended about 30 years ago on both properties. In the subsequent decades, autumn olive, glossy buckthorn, burning bush, multiflora rose, bush honeysuckle, and bittersweet vine became the dominant shrub community in areas that had not yet succeeded to forest. At Thompson Forest, the former pasture was nearly impenetrable. At both sites, the “old field white pine” woods supported a monoculture of buckthorn in the understory. 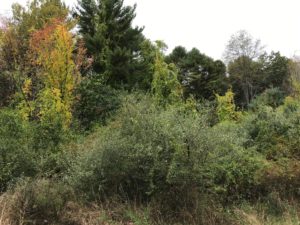 A tangle of invasives: A former pasture on Durham, NH’s Thompson Forest conservation area is heavily infested with invasive shrubs and vines, October 2017.

When Durham acquired the Oyster River Forest (ORF) in 2013, 20 acres of old field and riparian habitat were overgrown with large, invasive shrubs. Buckthorn had crept into the adjoining former pasture turned woods. The USDA Natural Resources Conservation Service (NRCS) contributed significant Wetlands Reserve Program funds for the property acquisition, with a goal to restore the shrub habitat for the New England cottontail. The Town was also interested in encouraging milkweed for monarchs and native plants for wild bees, as well as providing a scenic backdrop for a popular trail.

Active farming on most of the Thompson Forest (TF) dates back to at least 1820. Aerial photos from the 1990s show about half the property still being hayed or pastured. By the late 1990s, the fields were abandoned, after which invasive plants began to invade. By the time the Town acquired the property in 2016, the old farm access road was blocked by a dense mix of large invasive shrubs. 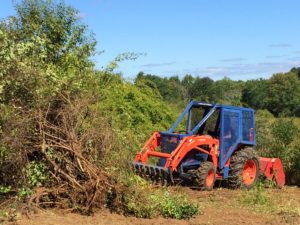 Forest Savers LLC from Woodstock, Vermont uses a custom-built tractor to uproot and shred invasive shrubs at the Oyster River Forest in Durham, NH as part of a 60-acre restoration project to restore a healthy native plant community to benefit pollinators, songbirds, and the state-endangered New England cottontail. 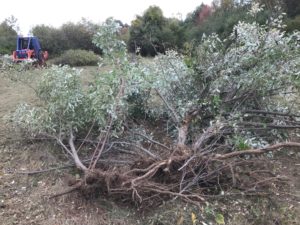 Mechanical control of invasive plants began in 2014 and 2017 at ORF and TF, respectively. Following decades of growth, the plants were too large to be managed with hand tools, so we engaged Forest Savers, LLC of Woodstock, Vermont. They used their custom-built tractor to uproot and shred each invasive plant clump. Additional acres were logged to create a 60-acre early successional patch on ORF and 15 acres of similar habitat on TF.

Within six months of the invasive clearing, a variety of native shrubs were planted at both sites to jump-start the transition to a shrubby plant community. A landscape contractor was hired by NRCS to plant 5,400 one-gallon sized containers of shrubs at ORF. A crew of eight planted the shrubs, including two people who operated a handheld auger to dig the planting holes. The cost of the shrubs and planting exceeded $100,000. At Thompson Forest, volunteers helped plant 8,000 bare-root stems of a dozen species of native shrubs; the cost of planting was less than $10,000. 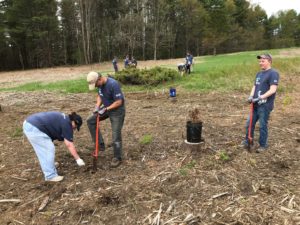 Volunteers plant bare-root shrubs on Durham, NH’s Thompson Forest as part of an effort to jumpstart a native shrub community one year after invasive plant removal on this property.

We don’t have monitoring data to assess the survival of the plants. Anecdotally, some plants have survived, including gray dogwood, bayberry, black chokeberry, hazelnut, and grapevines. However, many did not survive due to several factors including lack of rain, (drought conditions), compacted or rocky soils that made planting by volunteers difficult, and deer browsing. Fortunately, planting was complemented by a native seedbed of grasses, sedges, wildflowers, and woody plants that have begun to reclaim the habitat. But a heavy seedbed of invasives remains. We’ve continued hand pulling, cutting, and digging out the regrowth, but it is not feasible, effective, or cost-effective to rely solely on these techniques to reach our goal of a mostly self-sustaining native-shrub/meadow habitat. To ensure that invasives don’t regain dominance, the Town hired a certified pesticide applicator to treat invasive plants using a foliar spray at each site.

The shift toward a native plant community is moving in the right direction at the three sites. Wildlife has responded in kind, with bumble bees, dragonflies, butterflies, and songbirds in abundance. The trails that now wind through these managed habitats are enjoyed by the public. The control of invasive plants continues, although each successive year should require less intense intervention.

Success is only possible through a well-planned, coordinated, and sustained approach. The Town of Durham made a strong stewardship commitment in both funds and staff time, which was supplemented by grant funds from conservation partners and private donations from local residents. A Land Stewardship Plan guides each of the three properties. The Town engages volunteers to help with the hand pulling of invasive sprouts and seedlings, complementing the work of consultants and staff. 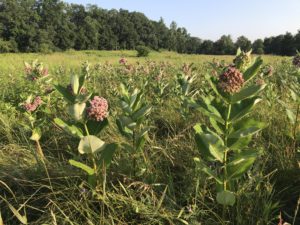 Common milkweed is thriving in the meadow-shrub habitat at the Oyster River Forest in Durham, NH, 5 years after an invasive control and habitat restoration was initiated at this site.

In hindsight, I would not plant shrubs after invasive clearing. Instead, I would rely on the native seed bank to provide plants, while I focused on controlling the invasive plants that sprouted. This approach would allow native plants that are adapted to the local soils and site conditions to thrive and have an advantage over introduced cultivars or plants that might be native to the region, but not the particular location. Funds that would have been spent on plantings would be better targeted toward invasive control and evaluating ways to rebuild the soil structure after decades (or centuries) of disturbance. 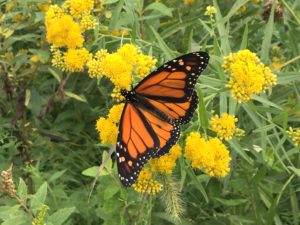 A monarch butterfly gathers nectar on goldenrod a year after an invasive control plan was initiated on Durham, NH’s Thompson Forest. 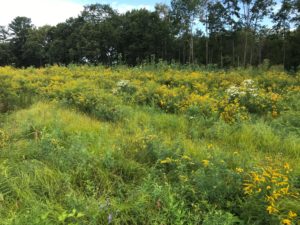 A field supports goldenrods, asters, sedges, and other native plants on Durham, NH’s Thompson Forest one year after invasive plant removal on this property.

Restoring a native plant community takes time, persistence, commitment, patience, and humility. The rewards are plenty. Here are some of mine. Watching native bumble bees gather nectar and pollen in a field of goldenrod and common milkweed. Listening to the “bouncing ball” song of a field sparrow. Sniffing the aromatic leaves of a self-seeded cluster of sweet fern. Discovering a patch of purple milkwort. Seeing monarchs and their mimics, the viceroys, flit across a field of native wildflowers. And not an autumn olive in view on the Oyster River Forest meadow.

Ellen Snyder is a certified wildlife biologist and an independent consultant, specializing in habitat management, invasive plant control, land stewardship planning, and nature writing, based in Newmarket, NH. Since 2003 she has been the sole owner of Ibis Wildlife Consulting. Since 2017, she works as the Land Stewardship Coordinator for the Town of Durham. From 1993-2003 she was the Wildlife Specialist for the University of New Hampshire Cooperative Extension. Ellen has written wildlife and land stewardship plans for many public and private landowners.