In 1999, I started experiencing what Western medicine could only define as “frozen shoulder.” I couldn’t raise my arms above my head or dress myself. It was strange because it started in one arm and over time engulfed the other. My doctor kept saying, “You must have injured yourself at some point and you just don’t remember.” I knew he was wrong, because, of course, it was stress-related from my horrible DC commute and the weight on my shoulders from the task of updating the Fairfax County (Virginia) Code regarding all things trees.

But Western medicine doesn’t know how to deal with stress-related illnesses, so I agreed to an invasive surgery that would seek to cut apart the stuck tissue in my shoulders, first in one then the other. Luckily, just before my surgery date, I found “alternative medicine” and was able to dress myself again within a week. I saw an acupuncturist four times in five days and was on the road to a full recovery.

Why is the “alternative” not mainstream? How can we change this? In medicine, progress is being made to make treatments once considered “alternative” more available and part of a holistic treatment plan. It’s becoming well known now that when humans are treated holistically, the outcomes improve.

What if we treated land holistically? This is, of course, the basis for ecological design: evaluating and either repairing or restoring natural systems. We can do this on a site-by-site basis, but what happens when we expand this concept to the land use and development process?

How can we change how land is treated by humans?

In many New England communities the concepts of green design, green energy, and green streets are embraced; however, outside New England, and within it in some places, more progress is needed in this regard. How do we convince elected and appointed officials to “do the right thing” and support green initiatives? (Please note that I’m using the word “green” in this context as shorthand for all types of sustainable design elements from solar power, to green stormwater infrastructure, to large landscape conservation.)

Get to Know Officials

When trying to influence people to “do the right thing” the triple bottom line is a convenient lens to use (economic, social, environment). Does the elected official care more about the economic outcome or the social impacts (cost of a water treatment plant or impacts on consumers)? Are there environmental arguments that can be made (local asthma rates that are higher than the state or national average to promote tree planting)? Who are the champions in the official’s community that they listen to (and what values do they share with your goals)? To answer these questions one needs to get to know the officials, either by having a beverage with them if they are accessible or getting to know their aides or staff. In order to influence the process, you have to know the people who manage the process and be able to understand their perspective. And, of course, you can track election cycles and wait for people who are more inclined to support your green changes.

All land comes with lists of what can and cannot be done on that land. Hopefully, some thought went into those designations, but frequently a one-size-fits-all approach results in unique circumstances. By placing language in planning documents that state the goals and policies of a community with regard to the implementation of green principles, future outcomes can be influenced. If a town plan states that it is the policy of the community to preserve and enhance rural character, and a chain store with an ugly façade is being considered, this policy language can be used to influence the outcome. 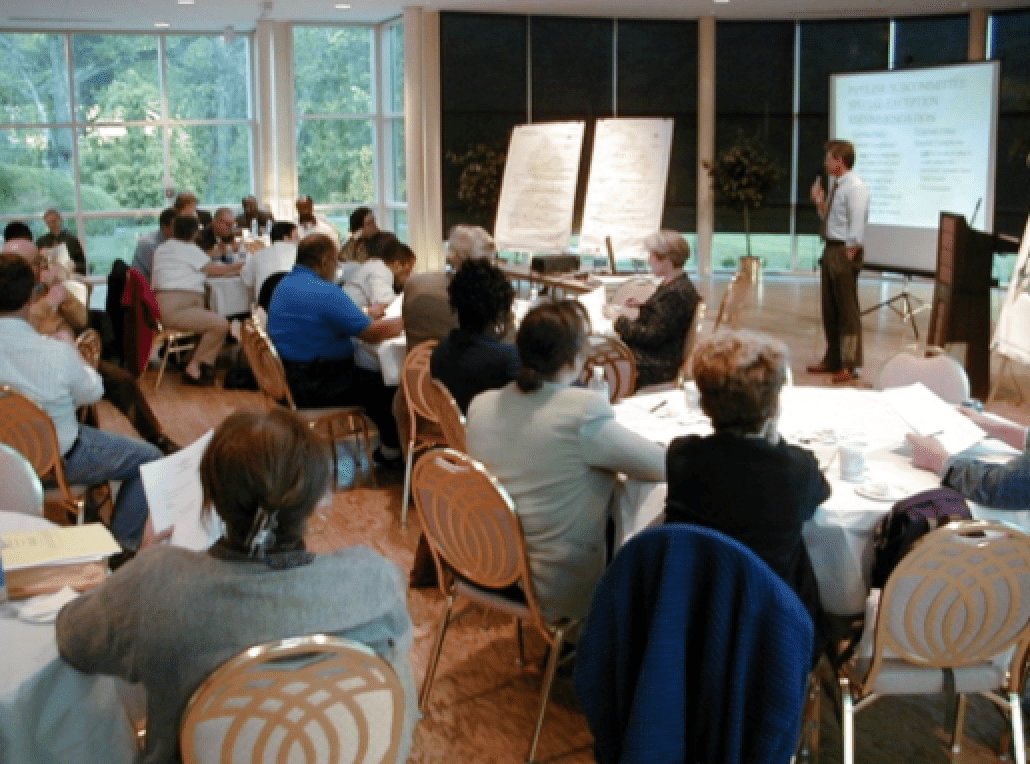 The same can happen with green goals and policies. In Fairfax County, Virginia in 1996 the Urban Forestry Division staff was cut from 14 to 2. Just after that I started as the director. The next year the county set a tree canopy goal and established a multitude of policies and strategies to attain the goal. This resulted in a complete restoration of the division staff and its permanence in future budgets. People saw the value of the work being done and were able to point to the agreed-upon policies and strategies when budget cuts were proposed in the future.

As part of the tree canopy goal setting, a canopy coverage comparison was prepared of various years. It showed that in many places in the county the tree canopy coverage was below 20% (shown with a dark tone on the map). It was not rocket science to see that the canopy coverage had decreased exponentially over time; the difference was that they were seeing it in a simple graphic for the first time. What seemed to change in people’s minds was that the forest canopy is part of the public infrastructure that needs to be viewed as having collective value to the community. 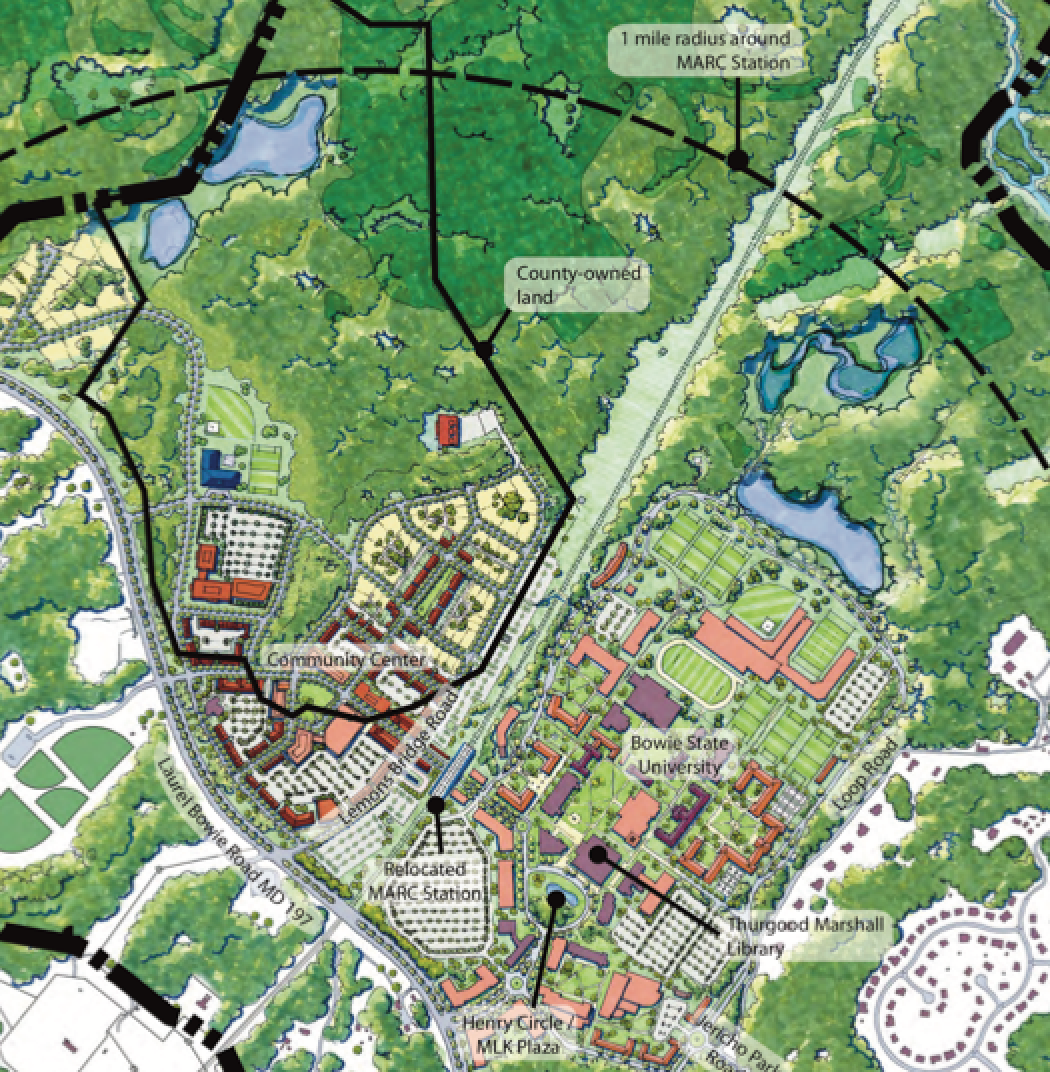 Provide public information about the goals of green public infrastructure.

In Prince George’s County, Maryland streams were already being viewed as public infrastructure in the late 2000s when the health of the Chesapeake Bay was continuing to decline. As the birthplace of low impact development methods that seek to infiltrate stormwater on-site to mimic pre-development conditions, the county surveyed hundreds of miles of streams and prepared a stream corridor assessment to determine which elements of the infrastructure were most in need of restoration. This dataset became a model for communities needing to conform to the pollution limits imposed by the EPA within the Chesapeake Bay watershed where streams, wetlands, and the vegetation they support are now all considered part of the public infrastructure to be managed and improved.

We all play a role in the land development process in one form or another. Perhaps you don’t have to get a local permit to do a design/build project, but at some point someone decided that land was good for that use and zoned it that way. In some locations there are overlay zones that need consideration. For example, within 1,000 feet of mean high tide of the Chesapeake Bay there is an overlay zone where sensitive water-based resources are protected. Notice I didn’t say “where development is severely restricted.” Both statements are true. Both statements can elicit different responses in an audience. The words we use to describe our desired outcomes should be carefully selected to ensure the positive outcomes we seek.

By getting to know our elected and appointed officials, giving them the support they need in decision-making by having established policies, and noting wherever possible that forests, and streams, and wetlands are part of our valuable public infrastructure, we can move the ball forward great distances and make green the standard, not simply the alternative.

Specific to Massachusetts, I highly recommend this excellent publication from Mass Audubon: Shaping the Future of Your Community: A Citizens Guide to Involvement in Community Planning, Land Protection, and Project Review in Massachusetts.

CJ Lammers is an Assistant to the Executive Director at The Conway School in Northampton, MA and an Adjunct Professor in the Sustainable Landscapes Program at The George Washington University, Arlington, VA Campus.

sus-tain-a-bil-i-ty – Discovering the True Definition, Defining the New Paradigm
Lessons Learned from the First Year of a School Garden