By Maureen Sundberg on August 15, 2018 in Landscape Design, Native Plants

Before the hot weather took hold in New England, ELA took a late spring walk through Garden the Woods in Framingham, MA to see what was blooming. A return visit a month later offered additional photo ops. In addition to lovely individual plants, we also found some nice woodland combinations.

Penny Lewis, ELA Executive Director, provides photos; Dan Jaffe, Propagator and Stock Bed Grower at the Garden, provides insight into some of the plants that caught our attention. 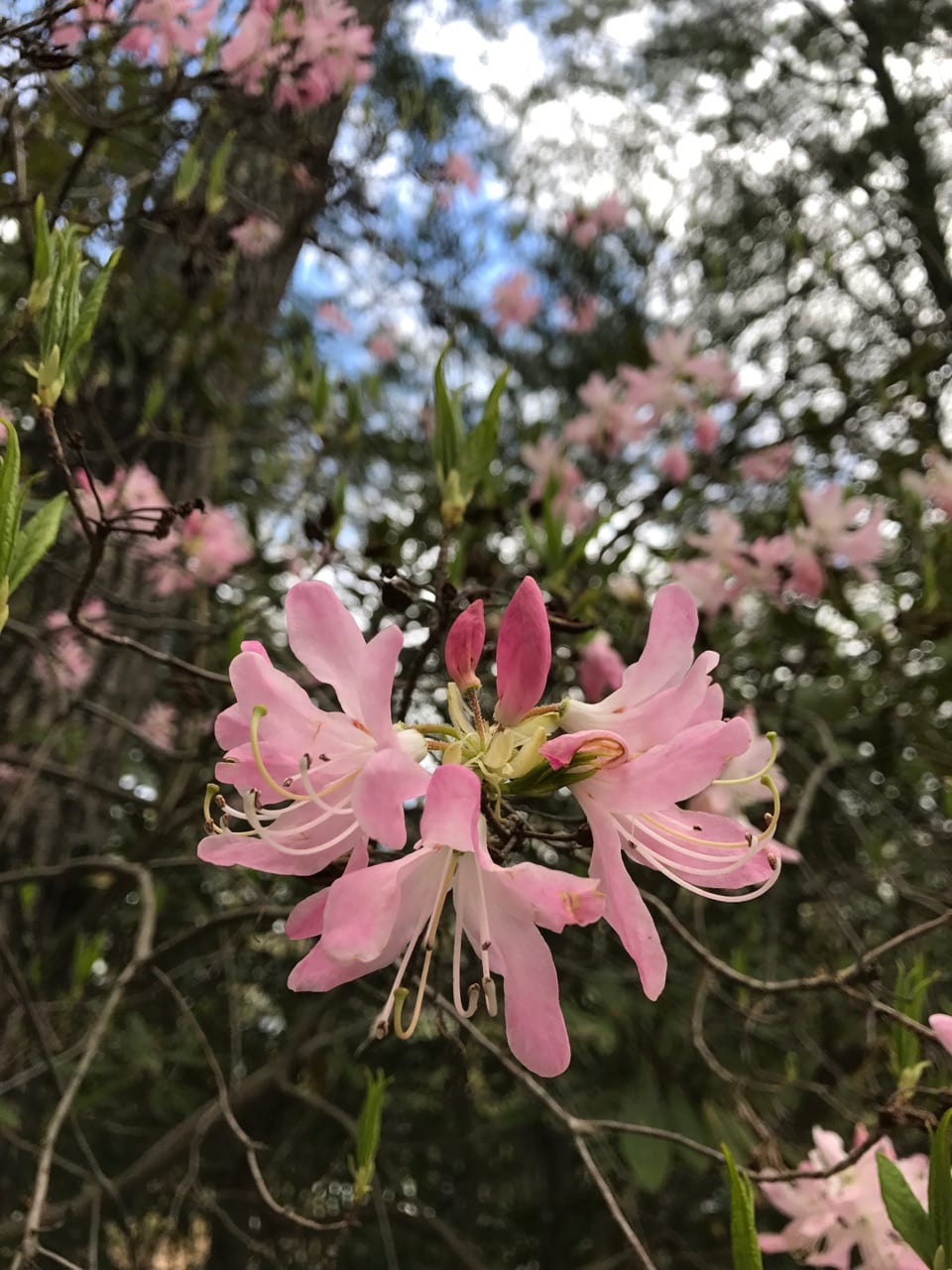 Rhododendron vaseyi, Pinkshell azalea. Though reasonably common in the horticultural trade this species occurs only in a small range in the southern Appalachian region. It is one of the first azalea to bloom in spring and looks excellent under-planted with the ephemerals that bloom at the same time. Trout lilies (Erythronium americanum), bluebells (Mertensia virginica) and rue anemone (Thaltictrum thalictroides) make for a wonderful carpet in which to place a pinkshell azalea. 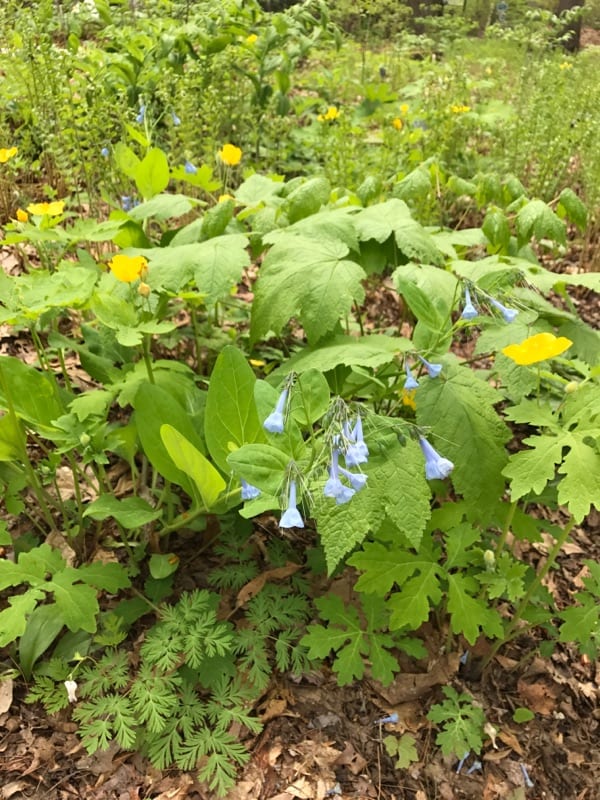 Mertensia virginica (Virginia bluebells) and Stylphorum diphyllum (wood poppy). This is our go-to pairing for spring garden ephemerals. Both the bluebells and the wood poppy bloom for much longer than many other ephemeral species (especially the wood poppy), and once a seeding population is established they are very adept at seeding into established gardens and popping up around other plantings. Throw in a few rue anemone (Thalictrum thalictroides) and maybe a Trillium or two and you can have your very own Garden in the Woods at home. Be sure not to confuse the native wood poppy (Stylophorum diphyllum) with the invasive celandine poppy (Cheilodium majus) as the two can look very similar. 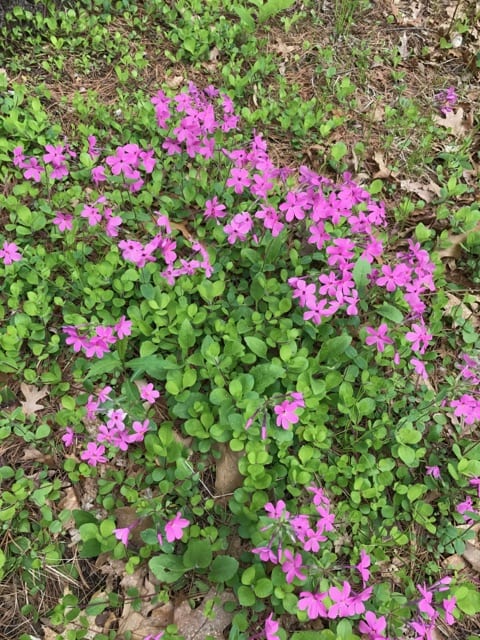 Phlox stolonifera ‘home fires’. Part of the woodland garden expansion this species was planted partially in homage to the history of the early First Garden (the original name of the woodland garden) where Appalachian species and New England natives mixed regularly. Though native a touch south of New England, we have found this species to be the most shade and drought tolerant of any of the phlox species. The bright pink flowers contrast wonderfully with the yellow flowers of barren strawberry (Geum fragaroides) and yellow wakerobin (Trillium luteum) planted nearby. 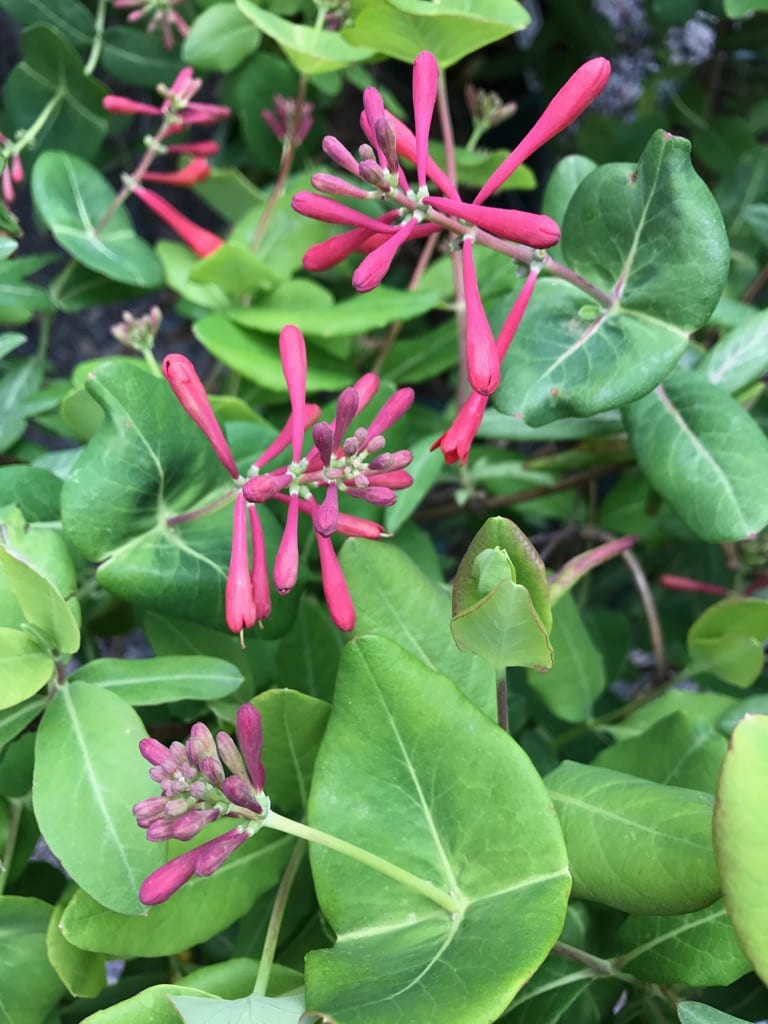 Lonicera sempervirens, trumpet honeysuckle. Easily our favorite choice of lianas (woody vines) trumpet honeysuckle blooms for months on end, often fruiting while still blooming in the later summer months. The flowers are a deep red/pink and open to a bright yellow/orange center. There are few plants that are more adept at attracting hummingbirds, and we often watch the males battle each other for feeding rights at the plantings outside of the horticulture building at Garden in the Woods. 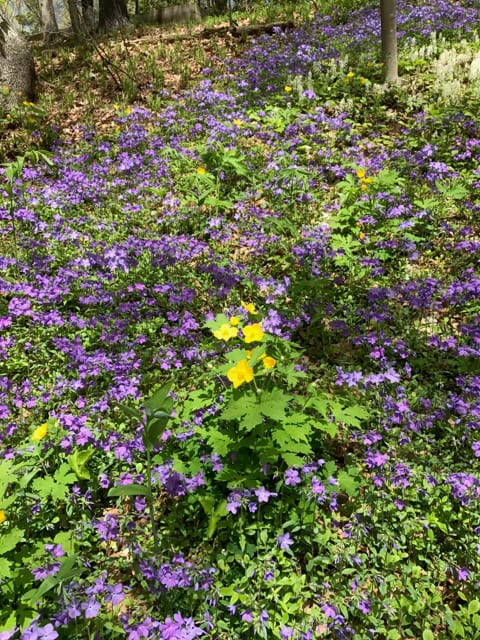 There are a variety of different species in this image but the main two are Phlox divaricata (woodland phlox) and Tiarella cordifolia var. cordifolia (running foamflower). This combination is the backbone of a large section of the woodland garden, and we often find ourselves recommending it to people with established woodland gardens who are still adding mulch to their garden. We much prefer living mulches to bark, wood chips or even leaves, and this combination is one of the best. The phlox has a wonderful fragrance to the flowers and walking through a patch of it smells as if someone has just made a cup of black tea and dumped a whole bunch of honey into it, absolutely wonderful. The species foamflower is separated into two distinctly different varieties on the East Coast. Down south one can find variety collina which grows in a clumping manner similar to Heuchera. Our native form is variety cordifolia, which is well-named as the running foamflower because it sends out stolons looking for new ground to colonize. Not only do we prefer the northern form for its native range, but when using this species as living mulch that running form is essential. 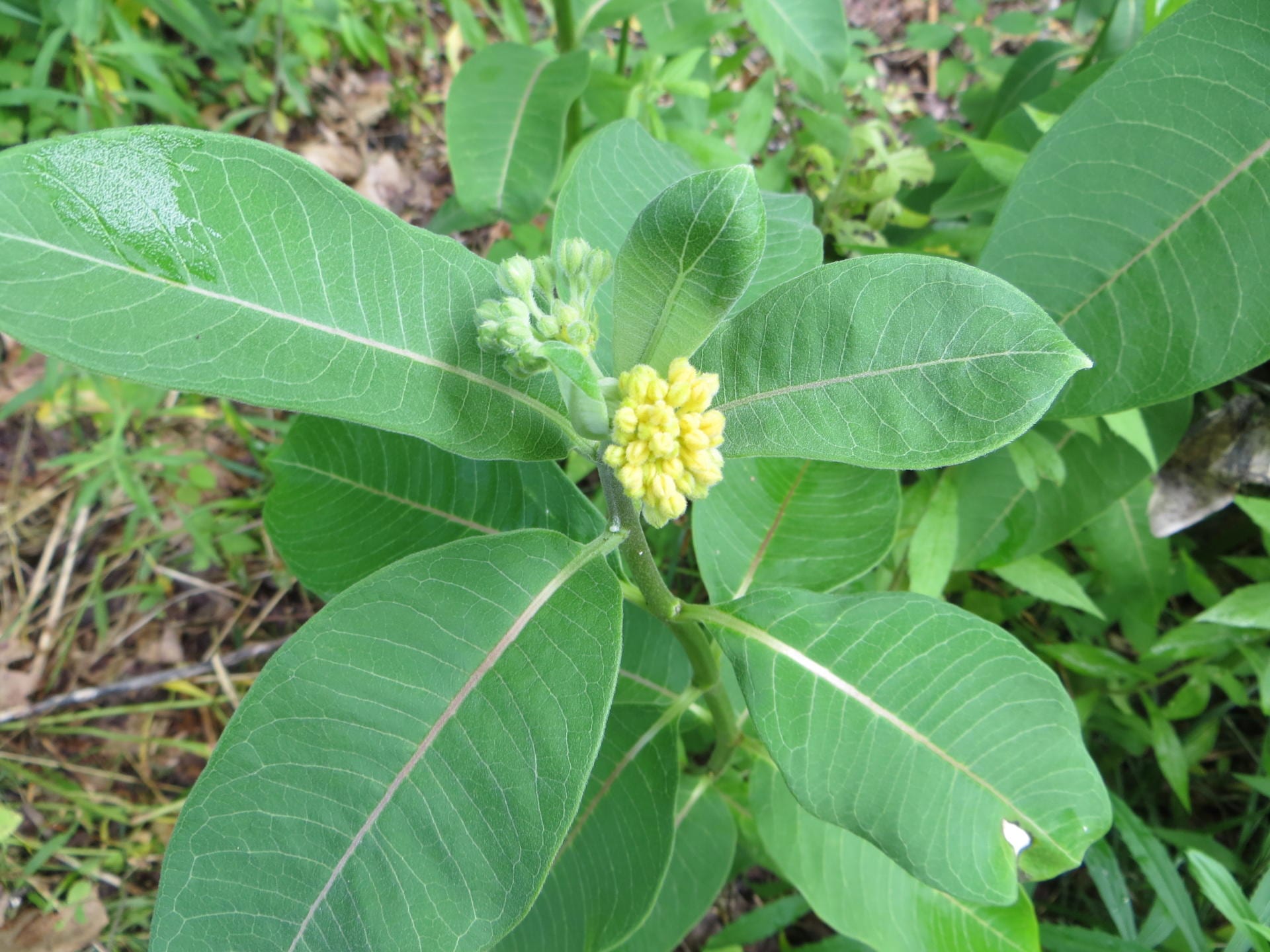 Asclepias syriaca, common milkweed. This is the most common milkweed in New England. It is the preferred host site for the monarch butterfly, as well as being an important plant for a large variety of bees, butterflies, ants, spiders, and other insect life. This is a strong spreading species that is not well suited to small garden spaces but is an excellent choice for some of the more challenging sites in our area. We believe every roadside in New England should be covered with common milkweed. 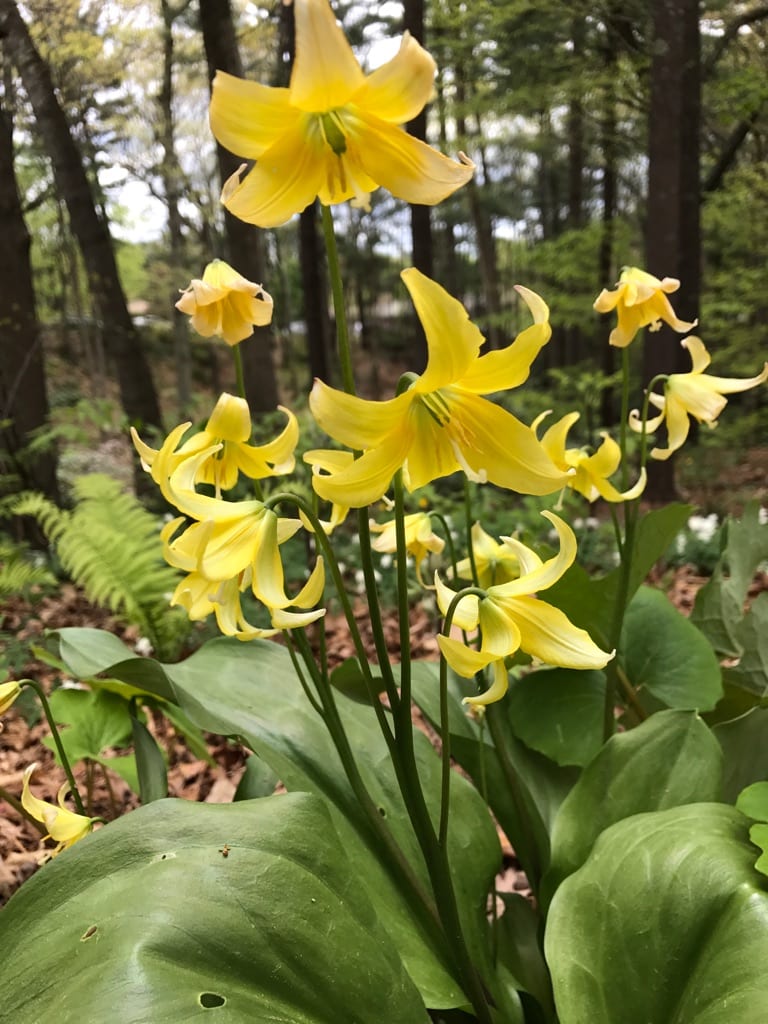 Erythronium tuolumnense, western trout lily. Originally planted at Garden in the Woods in order to compare its similarities and its differences to our native trout lily (Erythronium americanum), the western trout lily is endemic to central California. From a horticultural point of view one could argue that it is showier than the East Coast species in flower, the flowers are larger and bloom more consistently than our eastern species. What it gains in flower it loses in foliage however as this species’ leaves lack the trout-like coloration that give trout lilies their name. 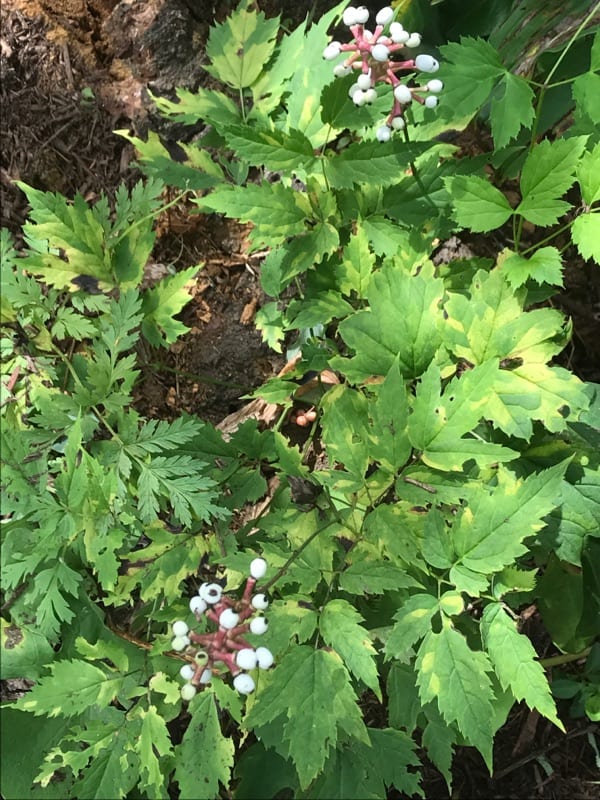 Actaea pachypoda, doll’s eyes or white baneberry. A plant at home in rich organic soils, the baneberries bloom much earlier that the more commonly planted Actaea racemose, and though the flowers are indeed less showy they are quickly followed by an amazing fruit display. Red baneberry (Actaea rubra) is the bright, showy species while doll’s eyes fruit display includes a pure-white berry with a distinctive black eye in the center of it; slightly off-putting and unarguably very cool, this is probably the best choice of native plant if your garden goal is to scare young children. Note that all parts of this plant are poisonous.

Breaking up a Boxy Backyard
Wait! Do you really want to plant that there?