GROVE is located in Carpenter Woods, a birding park in Philadelphia. It is a small scale restoration project that evolved from an art project that began with paper trees and ended with real trees. There may be no better way to learn about plants – native and non-native – than to try to transform a mature Japanese knotweed stand into a native oak grove using little more than art and hand tools. 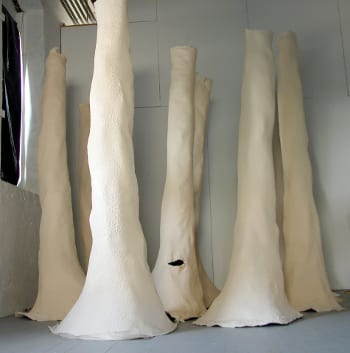 Paper trees were constructed in my studio. 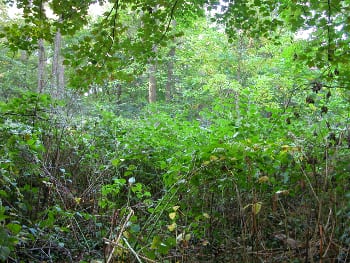 The future site of GROVE was overgrown with Japanese knotweed. 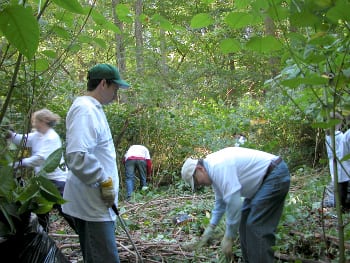 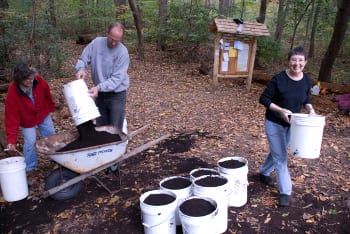 New soil was brought on site as a base for the paper trees and future live plantings.

It is impossible to separate GROVE from some of the most difficult times in my life. When my husband Bill died two weeks after we installed the paper trees on the site, it felt like all the lights went out and I was left in darkness. Working in GROVE, tending the trees we had planted in Bill’s memory, slowly turned the lights back on for me, bit by bit. 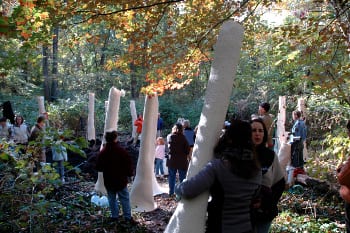 Eighteen paper trees were installed on the prepared site. 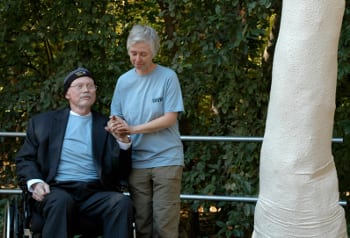 GROVE was dedicated to Bill at a bus-stop ceremony. 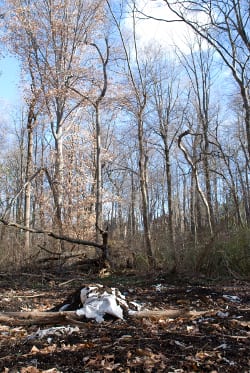 GROVE’s paper trees began to decompose over the winter.

After the initial plantings of native trees and plants, most of what we did for the first three years was to water the first year trees and to pull and cut back non-natives, especially Japanese knotweed. Each year we expanded the area in which we removed non-natives. When we did that regularly, we were amazed at the many native volunteers that re-emerged. 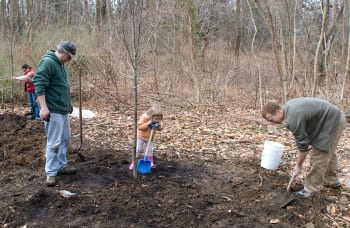 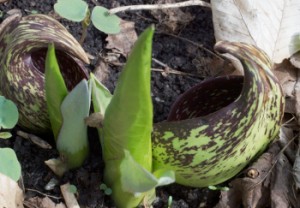 Skunk cabbage was one of the first natives to return to the site.

The first natives that returned in full force to GROVE were skunk cabbage and jack-in-the pulpit. Later we were graced by waves of jewelweed. Volunteer oaks and tulip trees soon followed. Since native plants grow side by side with non-natives, removing the non-natives by hand allows you to see exactly what is growing and where. I’ve been pleasantly surprised by the return of the natives. Free plants!

There have been some unexpected problems in GROVE. Last year a contractor cut down many of GROVE’s original native trees and shrubs by mistake. Luckily, Erica Brendel, GROVE’s best friend, came down the trail in time to save one of the five original trees. She also made sure the contractor re-planted what had been cut down. 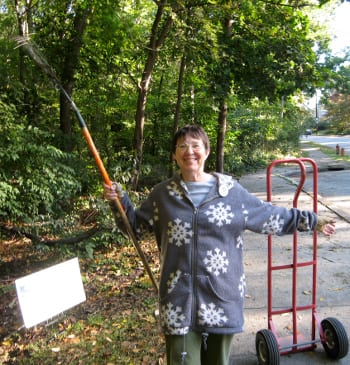 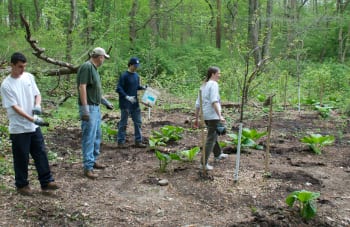 Dave Bower of Fairmount Park and Louise Hayes of Friends of Carpenters Woods work with volunteers to plant in early GROVE.

After they cut down GROVE I resigned in protest. The errant contractor was part of a large-scale restoration sweeping through the park for most of 2011. A large TARP grant funded tree removal, chemical injections to kill trees, mechanical mowing, and chemical spraying. I felt that I could no longer protect the small native plant place that I had worked so hard to create. It was a very difficult time for me. But I stayed in touch with Erica, as we have become good friends.

I’ve been lucky to have Erica Brendel, at my side since the beginning of the project. We met when I was cutting down multiflora rose on a volunteer work day. She asked me to stop, saying that it was the only winter cover available for the birds. Our conversation led me to develop a set of what I think of as guiding principles: first do no harm, less is often more, and waste nothing.

Erica lives nearby so she checks on GROVE frequently. For the first three years of the project, I drove down from Massachusetts several times a year to spend a day or two pulling non-natives. Going back and removing the non-natives over and over is the reason GROVE has persisted. The attention that Erica and I pay to the site addresses the problem of neglect, which is a large part of the problem of non-native plants. Our stewardship of the site makes all the difference. Human scale restoration works – we just need more humans to get involved. In a world that values the “efficiency” of chemical sprays and mechanical mowers, Erica and I can tell you that people power has worked well in GROVE. 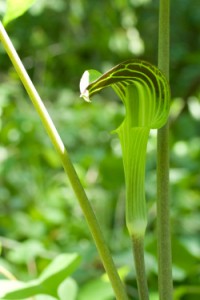 This year, many natives, including jack-in-the-pulpit, are thriving.

I went back to GROVE for Earth Day this year. The site looks good. Swamp white oaks, winterberry, elderberry, red-osier dogwood, ferns, jack-in-the-pulpit, skunk cabbage – all are thriving. And there is also lesser celandine, knotweed, English ivy and other challenges. During my recent visit, I pulled knotweed, fixed a fence, and shared the lessons of GROVE with interested visitors.

And that is perhaps the best news. The park was alive with visitors and volunteers on a wonderful Earth Day event organized by the Friends of Carpenters Woods, now run by Linda Gottschke, whose beautiful photographs of the birds of Carpenters Woods were hung on a rope strung between trees. Birders Erica Brendel, Keith Russell, and John Gottschke were also there. They have been tireless in their efforts to protect and promote the park over the years. Dave Bower of Fairmount Park brings hundreds of volunteers to work in Carpenter Woods every year. He has been another special friend to GROVE, bringing us hundreds of plants and many volunteers. He was there on Earth Day, too. Everybody was talking about native plants and their role in this park for birds and people. 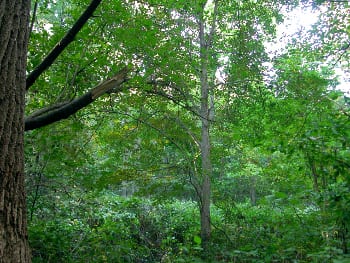 The GROVE site in 2007 before clearing the Japanese knotweed. 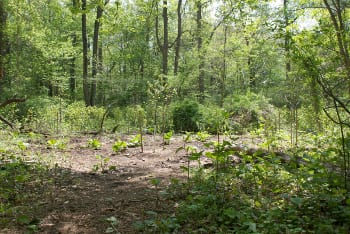 GROVE in 2008 with new plantings in place. 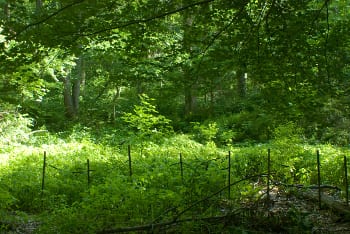 By 2010 native plants were returning to the GROVE site.

I am hopeful that GROVE will continue to thrive. I am going back in mid-July to pull non-natives and check on the volunteer oaks hidden away under the jewelweed. It will be hot and sweaty work and I will wonder at my idea of fun, until I stop and watch the birds and the bugs for a while. Perhaps I will see a tiger swallowtail or an orange skipper or an unknown visitor that will drive me to get out the butterfly book. I will pile up the knotweed stalks to use in my papermaking workshop at Rittenhouse Town. 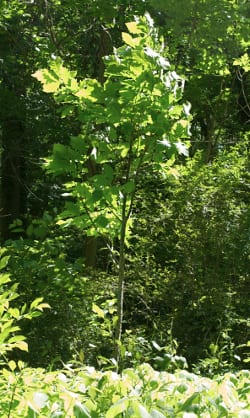 I hope to keep going back every year to watch the trees of GROVE grow. The one remaining swamp white oak that we planted in 2008 has finally put on a major growth spurt. Five years isn’t very long in the life of a tree, but at 53, I may only get to watch them grow for a while longer. So even though I would rather tend plants than write about them, I am trying to spread the word about GROVE by teaching, writing, and speaking about why native plants matter so much. GROVE was my effort to lead by example – and to leave a blessing, in the form of trees, to the park where Bill and I met and spent so many happy hours together. 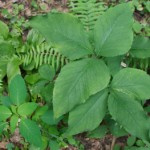 Louise Barteau Chodoff is an artist and educator who became interested in native plants when creating GROVE, a public art project. She began making paper from invasive plants in 2008 and offers papermaking workshops. Louise may be contacted at lbarteau@comcast.net.