This article was first published in the Santa Cruz Sentinel on July 13, 2012 and is reprinted with permission from the author.

We all think we know when we have gophers in our gardens, don’t we? We see the chewed-off plants, the openings to the tunnels and often, mounds of loose dirt. However, I recently learned that we should also consider the possibility that what we actually have are voles.

No, that is not a typo. I do mean voles, with a v — not moles. Recently I had an infestation of these hungry little rodents, which I discovered when I noticed damage and tunnels in an area not accessible to gophers. One species of fern and most of the blooming campanula in this garden bed were destroyed before I understood the problem and began to search for a solution that wouldn’t poison other critters or damage the environment. 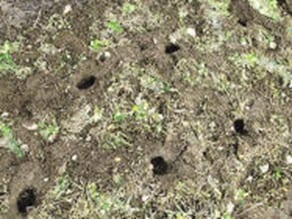 A vole infestation can result in holes throughout a garden. (Contributed Photo)

But, you may be asking, what the heck is a vole?

According to a UC Davis website, www.ipm.ucdavis.edu/PMG/PESTNOTES/pn7439.html, “Voles are mouselike rodents somewhat similar in appearance to pocket gophers. They have a compact, heavy body, short legs, a short-furred tail, small eyes, and partially hidden ears. Their long, coarse fur is blackish brown to grayish brown. When fully grown they can measure 5 to 8 inches long, including the tail.” They apparently feed on a wide range of garden plants, as well as turf and other landscape plantings. They can kill fruit trees by gnawing the bark either above or below ground within a few inches of the soil line. The website suggests control by clearing vegetation, excluding them from an area with quarter-inch mesh wire, protecting trees by wrapping their lower trunks with metal or heavy plastic, trapping, baiting, or by applying repellents. Since the narrow area above a retaining wall that they had infested in my own garden was unsuitable for most of these methods, I checked the Internet for information on repellents. 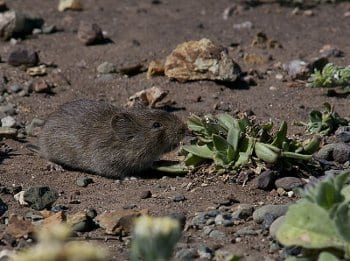 Voles can quickly damage a range of plants in a managed landscape. Photo by Jerry Kirkhart

I found that there are a number of products on the market claiming to repel the rodents. I ended up choosing one called MoleMax, partly because it is available at local garden centers, but mostly because the active ingredient, castor oil, is biodegradable. And because it is available in granular form as well as a spray — I like the granular because it is simply sprinkled in the affected area and then lightly watered in. (Though castor oil is derived from the castor bean, which contains a toxin, the MoleMax label says it can “be safely used around children and pets, when used as directed.”) Obviously my experience does not follow any guidelines for a scientific test of the product’s effectiveness, but I was pleased to see that vole activity ceased within 24 hours of application of MoleMax, and after two weeks I have seen no signs of its return. I am monitoring the area and will reapply the granules if I see new activity.

Why voles and other animals are repelled by castor oil is a mystery to me. According to the MoleMax label, the stuff repels, besides voles, most burrowing animals, including moles, gophers, armadillos (fortunately not usually a problem here), skunks, rabbits and ground squirrels. If needed over a wide area, it might get expensive for repeat applications, but in a small area like my retaining wall bed, it was a quick, easy and effective solution to a vexing problem. In years past, when we lived in a different house, I had successfully used a homemade castor oil spray to repel moles from a lawn. It was similar to a recipe at www.seattlepi.com (click on link or search “a gentler way to discourage moles”), but I disliked using the sprayer and the cleanup afterward so opted this time for a commercially made granular form. Now I plan to try it on some gopher-plagued areas. Stay tuned for future reports.

And if you, too, try MoleMax or another castor oil product for burrowing animal control, I’d welcome feedback on your results. Contact me at plantgardens@gmail.com.

We have a large, very hungry population of gophers (pocket gophers) here in California. The evening before my husband and I were due to leave town for five days, I discovered that a gopher had gotten into or under a raised bed somehow, though it was lined with gopher wire. The critter had managed to pull one of my green bean plants down through the wire. I knew that if I didn’t take action, I’d come home to an empty bean patch. However, the way the bed is constructed, I couldn’t set a trap to catch the varmint so spread MoleMax granules around the plants, watered the bed and crossed my fingers that it would repel the pest until I was home again and could decide how to trap or exclude him.

Well, it worked – no sign of any further action by the gopher and the beans are growing strongly. I’m thrilled though I still have no idea what burrowing animals find so distasteful about castor oil – I am just happy that the stuff works so well.

Sharon Hull is a horticulturist at the Pro-Build Garden Center in Santa Cruz, CA. Contact her at plantgardens@gmail.com.

Lessons of GROVE
Bats Losing the Battle against White-nose Syndrome