By Maureen Sundberg on July 16, 2015 in Invasive Plants, Native Plants

This article first appeared in EcoRI News and is reprinted here with permission.

Work will continue this summer on stabilizing a 2.6-acre undeveloped parcel owned by the Avalonia Land Conservancy in the heart of the Borough of Stonington. The now-barren land will be filled with plants and shrubs. The parcel at the end of Wall Street is wedged between Little Narragansett Bay and million-dollar homes. It’s the biggest tract in the Borough that is open to the public.

The National Fish and Wildlife Foundation’s Long Island Sound Future Funds program has provided a grant of $43,000 to clean and replant the parcel with native vegetation. With in-kind services provided by volunteers and the Connecticut Department of Energy & Environmental Protection (DEEP), the grant total is estimated at $97,000, according to MaryEllen Mateleska from the Mystic Aquarium & Institute for Exploration, which will be administering the grant. 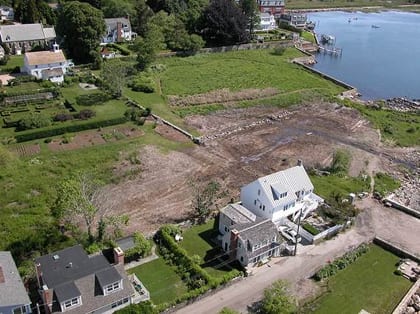 An aerial view of the Avalonia Land Conservancy’s Dodge Paddock and Beal Preserve in the Borough of Stonington, CT. The brown area is where phragmites, an invasive plant, were removed. A drainage ditch has been dug in an effort to dry the nearly three acres on Stonington Harbor. The next step is replanting the area with fresh and saltwater tolerant plants. (Roger Wolfe/DEEP)

The property is the result of two parcels being joined. In 1980, Mr. and Mrs. Leonard Beal and 12 other neighbors raised $150,000 to buy the 2-acre Dodge Paddock parcel from the heirs of Frank and Anne Atwood Dodge. That money was donated to the Avalonia Land Conservancy so that it could buy the property. Then in 1981, the Beals donated two-thirds of an acre adjacent to the Dodge Paddock. The donation came with the provision that the couple could maintain a garden on it for the duration of their lives.

The parcel has gone through many trials and tribulations, including an attempt to drain it that failed to protect it from the surging tides and storms. That effort in the 1990s included burying a pipe across the land with its outlet in the bay. Storms broke the pipe, and it continuously filled with sand, rendering it ineffective.

In 2012, Superstorm Sandy devastated the parcel. In some places the surge of water deposited nearly two feet of debris, gravel and rocks, according to Avalonia’s Beth Sullivan.

She noted that the storm broke a seawall and, with the changed landscape caused by the storm, water continued to pool on the property, which led to an unchecked growth of phragmites. Those plants were chemically treated by DEEP and removed. The lot is now continually checked for their return. The result of that effort has been a rather forlorn landscape.

The land has a rich history. It was once dry field, with a portion of fresh and saltwater marshland. In years past, it was used by locals for baseball games, according to local historian Beth Moore. She said that at the end of the 18th century it was agricultural land. Later, a slaughterhouse was built nearby, which earned the area the nickname “Shinbone Alley,” because of the bones that littered the area, Moore said. After that, it was used by fishermen and boat builders.

It might best be known as the site of the States Pottery Works, which operated from 1811-1834. The variety of pottery wares produced at the site are highly sought by collectors.

“We have to pay attention to the past to move forward,” Sullivan told a group of about 20 people during a recent meeting about the planned site work at La Grua Center at 32 Water St., just up the road from the site. In reference to efforts to control water at the site, Sullivan added, “Everything they tried worked for a while, then something changed.”

She noted that in 1999 the site was basically dry, with one small wet area. By 2003, the wetlands expanded because something changed, she said, whether it was runoff from somewhere else or a rise in the groundwater table. It was in 2006 that the phragmites started to grow and, in addition to the standing water, made mowing impossible.

With the new plan, and a drainage ditch in place that seems to be working, Sullivan said the water now flows in and then out. There should be no more digging at the site — perhaps just a bit of grading when the plants go in. When the phragmites were eliminated by the end of 2012, Sullivan said some native grasses came back, as well as goldenrod.

The job of picking the new plantings and designing the layout is now up to landscape designer Rachel Gilroy. She hasn’t yet begun her design work, but is now working on picking vegetation. She has divided the site into three zones and said that a lot of what she does at the site will be experimental. The plantings put in this summer will be evaluated next year to see how they fared. Some of the plants she is considering include groundsel bush, sea lavender, swamp rose, smooth alder, common buttonbush, and purple chokeberry.

During March and April, Mateleska said the focus was on clearing more debris, with planting expected to begin in May and continue throughout the summer.

Sullivan hopes that the plantings will attract a variety of insects, which will in turn attract a greater variety of birds. She said she hopes the project teaches others about the importance of protecting such sites.

David Smith is a regular contributor to ecoRI News.