By Maureen Sundberg on July 14, 2016 in Restoration

Plans for a new garden began when we realized that an infestation of crown vetch (Coronilla varia), an invasive weed, had to be eradicated from an area in the Mundy Wildflower Garden called “The Gabions.” The name comes from the heavy gauge wire baskets, filled with rocks and stacked one on top of the other, that rise vertically out of the creek and are used to control erosion and flooding. 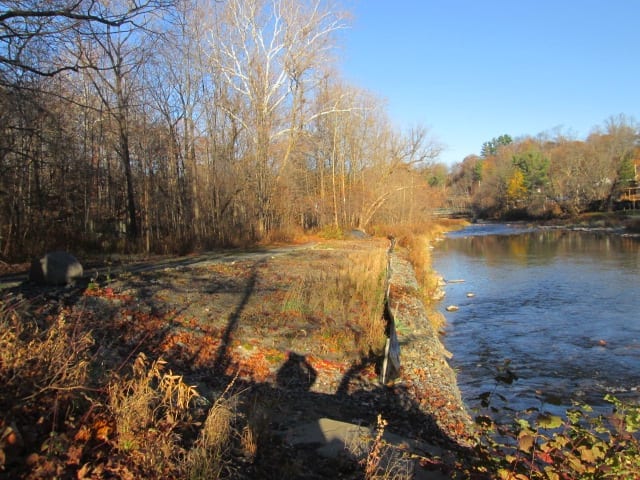 “The Gabions” area (left) along Fall Creek is the site of a multi-year restoration project. Photo: Krissy Boys 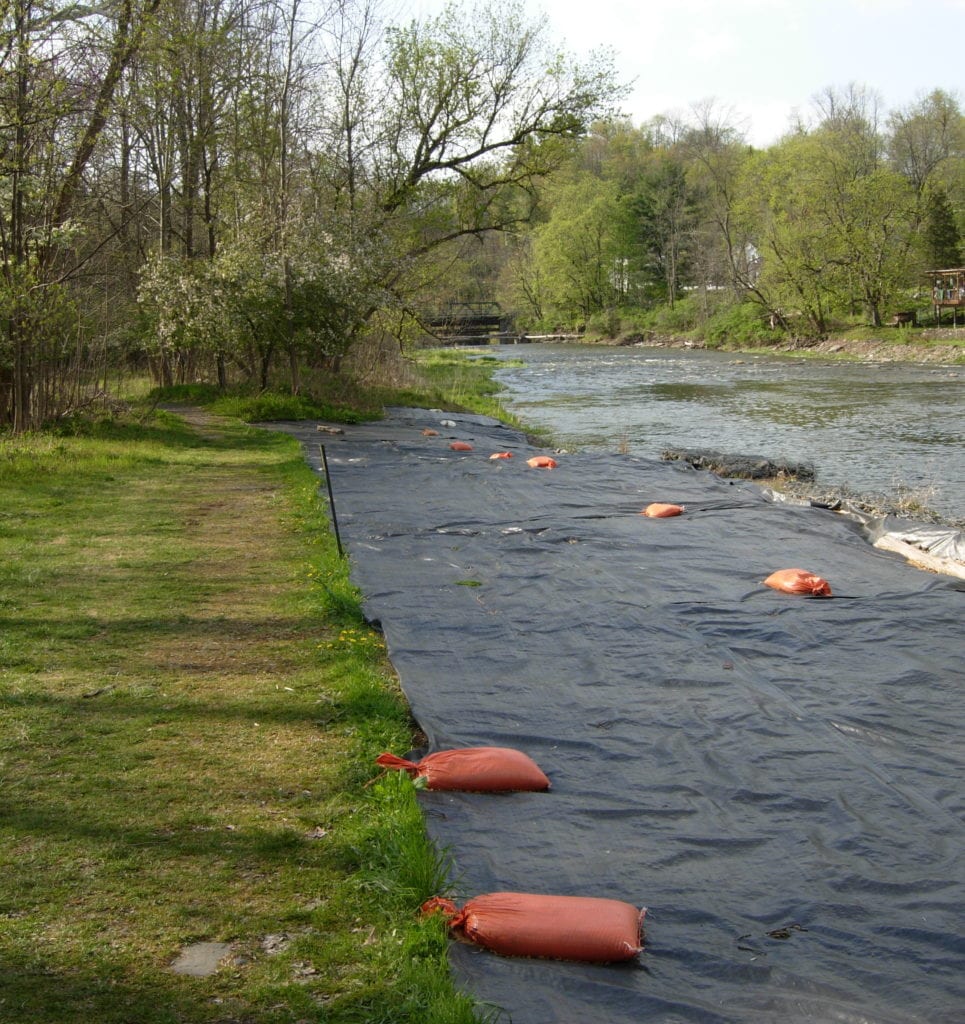 Instead of using chemical pesticides, we smothered the crown vetch for three years using a heavy-duty landscape fabric secured to the ground with metal staples. As we were about to lift the fabric for planting, we discovered a structural problem: the top run of gabion baskets was collapsing. Knowing this instability needed to be addressed, we contacted Cornell engineers to assess the site.

The assessment was discouraging: heavy equipment would be needed to remove the baskets and re-grade the entire site. To assure the surface would be weed-free as previously planned, the Cornell Grounds Department finished the area with a thick (4-6 inch) layer of gravel that was carefully chosen from deep inside a mine. This gravel was selected for two reasons. First, it came from a deep glacial deposit found 70 feet below the surface of the mine that had not been exposed to seed populations for about 12,000 years and therefore was free of weed seeds. Second, this vein produced gravel of a very small size, allowing plants’ roots to knit into it. 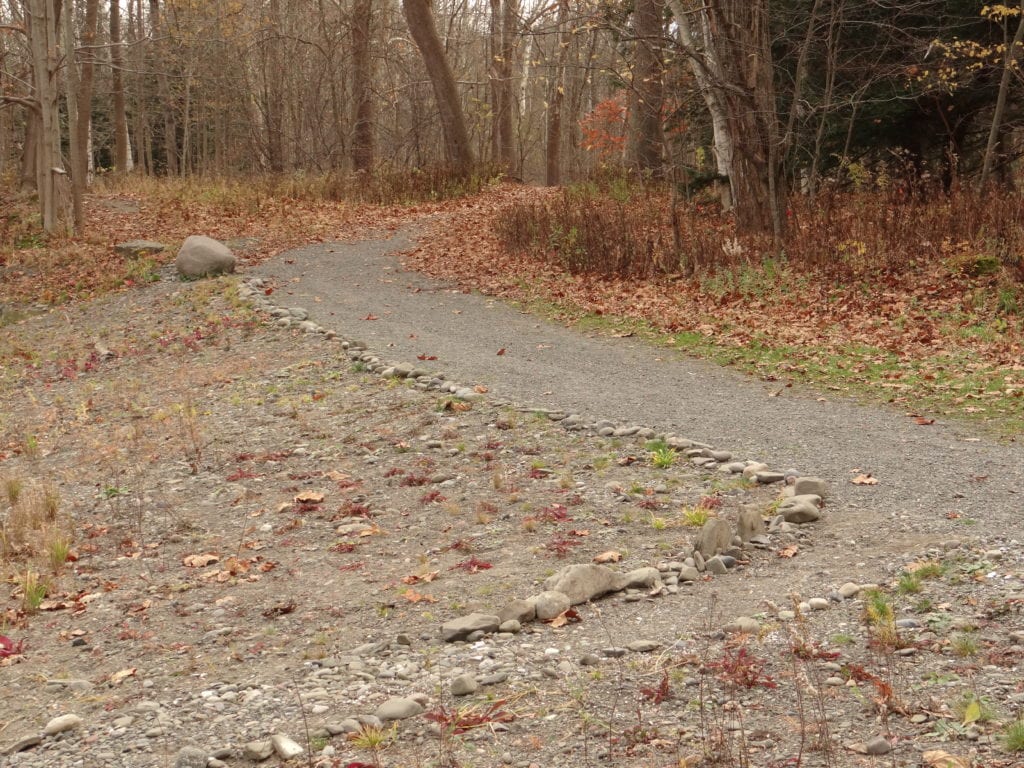 Our Natural Areas staff, volunteers and interns commenced to plant throughout the spring and summer of last year (2015). Along with plugs (plants grown in pots or trays) seeds were spread by hand directly on the surface, and they germinated and grew into robust first year rosettes. Native grasses and sedges planted in wide serpentine bands were used throughout as the dominant species. 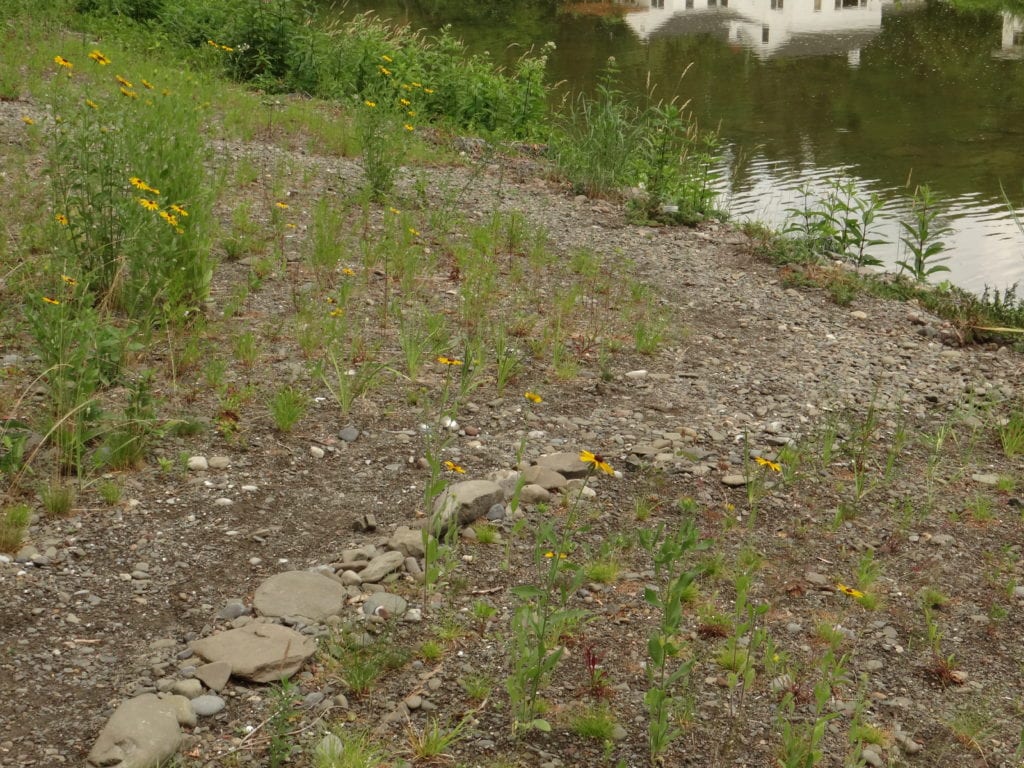 A year later, plants have begun to fill in alongside meandering paths. Photo: Robert Wesley

Beginning in spring, the cool-season native grasses, our wild ryes and my absolute favorites, are the stars of restoration plantings — Virginia (Elymus virginicus), Riparian (E. riparius), and bottlebrush (E. hystrix). They now move as one in the breeze while highlighted by pink wild geraniums (Geranium maculatum), red wild columbines (Aquilegia canadensis), yellow golden Alexanders (Zizia aurea), and the lavender and purple flowers of the tiniest penstemons (Penstemon hirsutus). All are inter-planted with two of the shortest, toughest plants, shaved sedge (Carex tonsa) and ivory sedge (C. eburnea). The grasses and forbs will mature to a couple of feet tall, and the sedges to a few inches. 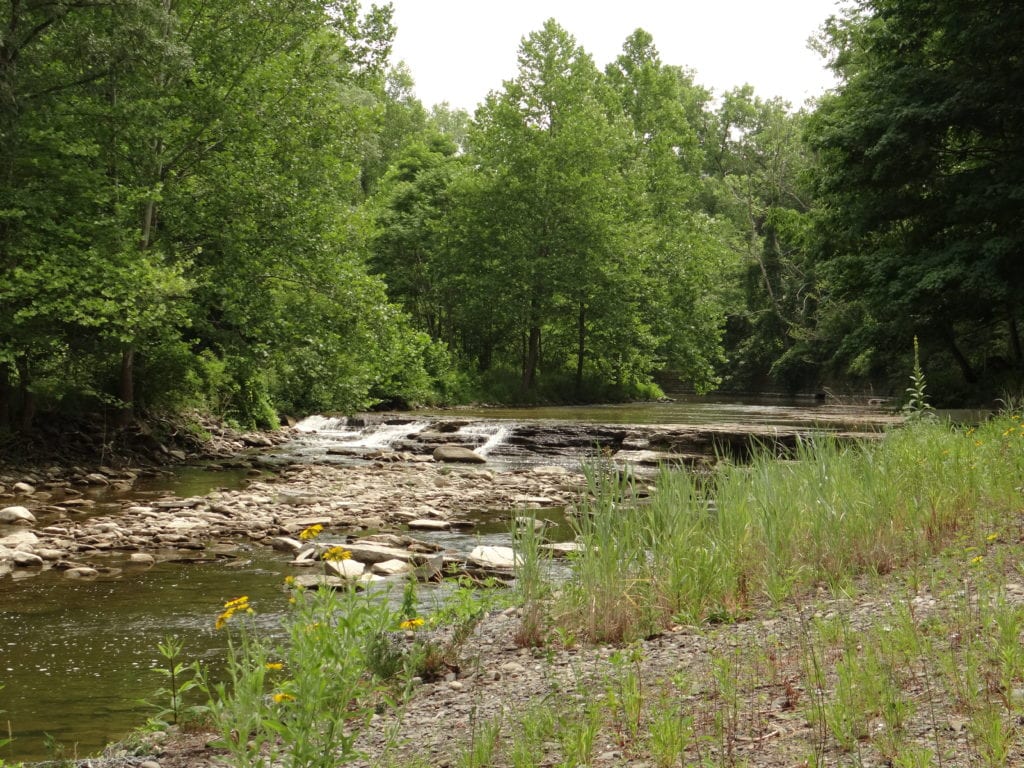 By July 2016, grasses and bold perennials take over in the warm mid-season. Photo: Robert Wesley 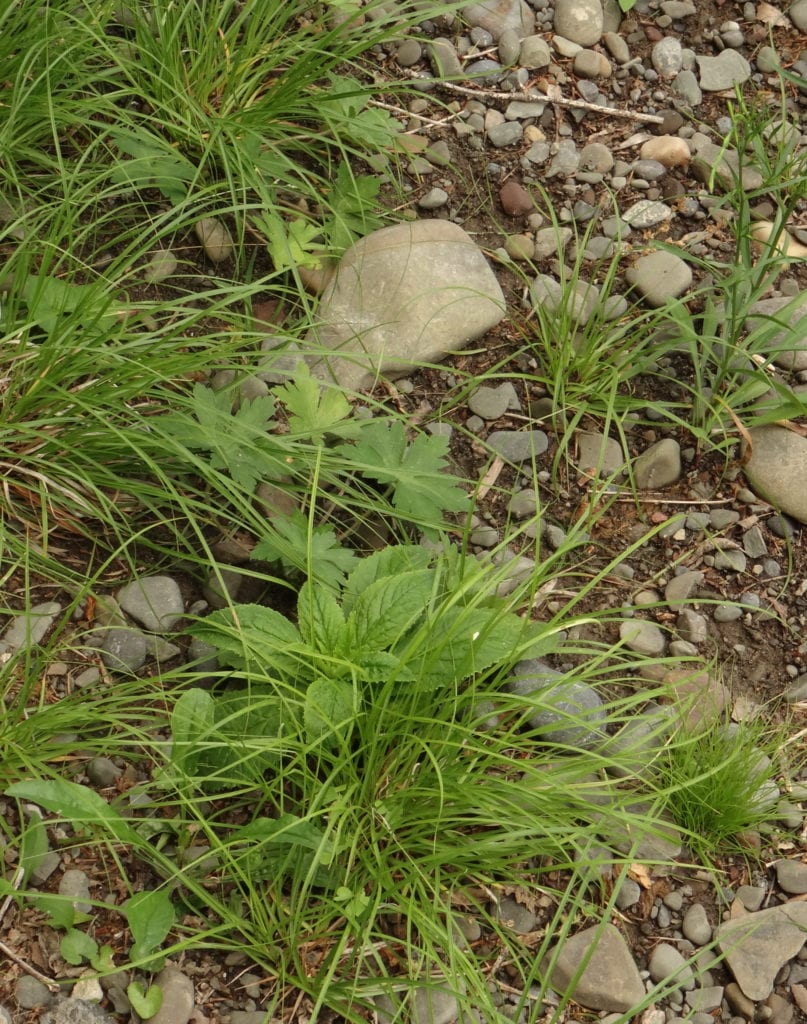 The flowering and interest they provide is evident all year, but autumn is the time to appreciate the goldenrods, asters, and grasses. Gray and bi-colored goldenrods (Solidago nemoralis and S. bicolor, respectively), singly arching and straight, their stems covered in tiny flowers, stand ever gracefully beside the rare, pungent upright mountain mint (Pycnanthemum muticum) and the common calico aster (Symphiotrichum lateriflorum). The asters weave a miracle every fall as hundreds of small bright flowers persist through morning frosts. This is why we call them “Frost Asters,” just one of their common names. They are brightened more so in combination with the fall colors of the native grasses, whose stems and leaves are bronzed in copper, gold, beige, taupe, red, and purple. 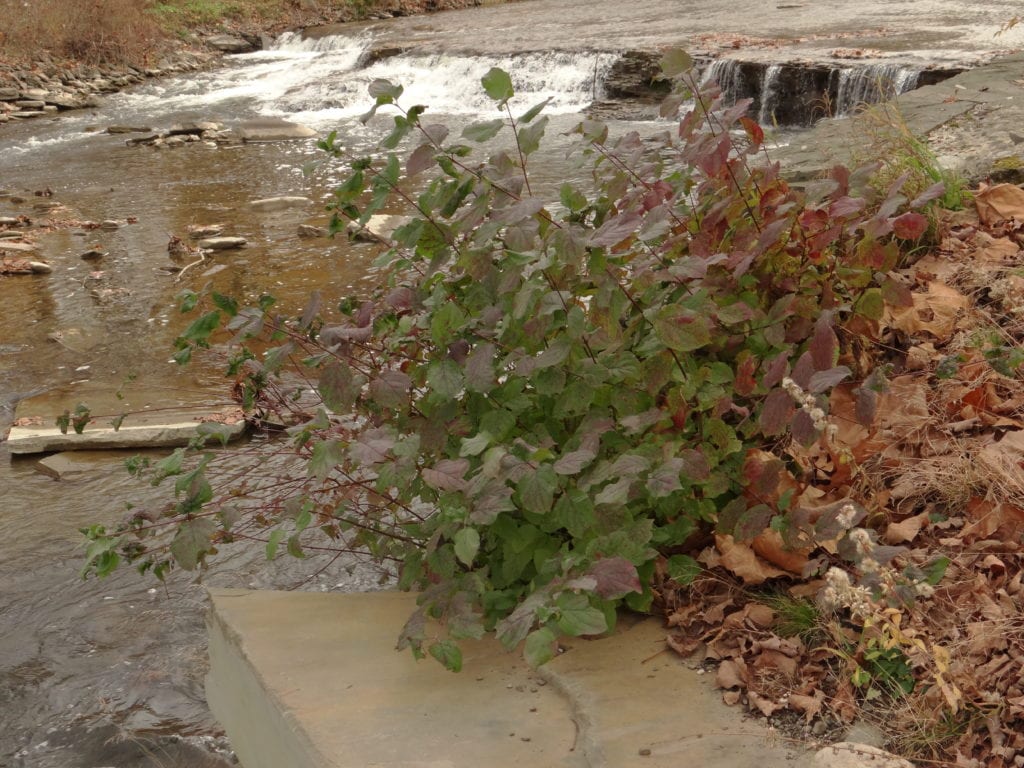 In autumn, a Fall Creek waterfall on the upstream end of The Gabions offers a beautiful view and a place to look for local wildlife. Photo: Robert Wesley

A few weeks later, the ripening seeds will be showy in their individual colors: white, cream, or buff. Naturally, plant combinations such as these are the perfect dried flower arrangement: they are a living tapestry, a full display of texture, color, and leaf patterns: all this for our sore eyes to feast on as fall moves a little closer to winter. Then a bird appears on the scene, grasps the stem of a goldenrod or aster, and begins feeding on its seeds. These plants provide a nutritious meal for American Goldfinches, White-crowned Sparrows, and other small birds. They fuel up on them late in the year, before travelling long distances south, while the seeds continue to provide meals for overwintering species. We do not cut them down to the ground; their flowers are now seeds, their stems and leaves may have butterfly eggs or larvae. They are essential to wildlife’s success.

Visit The Gabions area and the new planting as it matures to make discoveries for use in your gardens. Remember these plants need few inputs like water, fertilizer, and pesticides, yet provide so much for the larger community of animals, insects, and people. 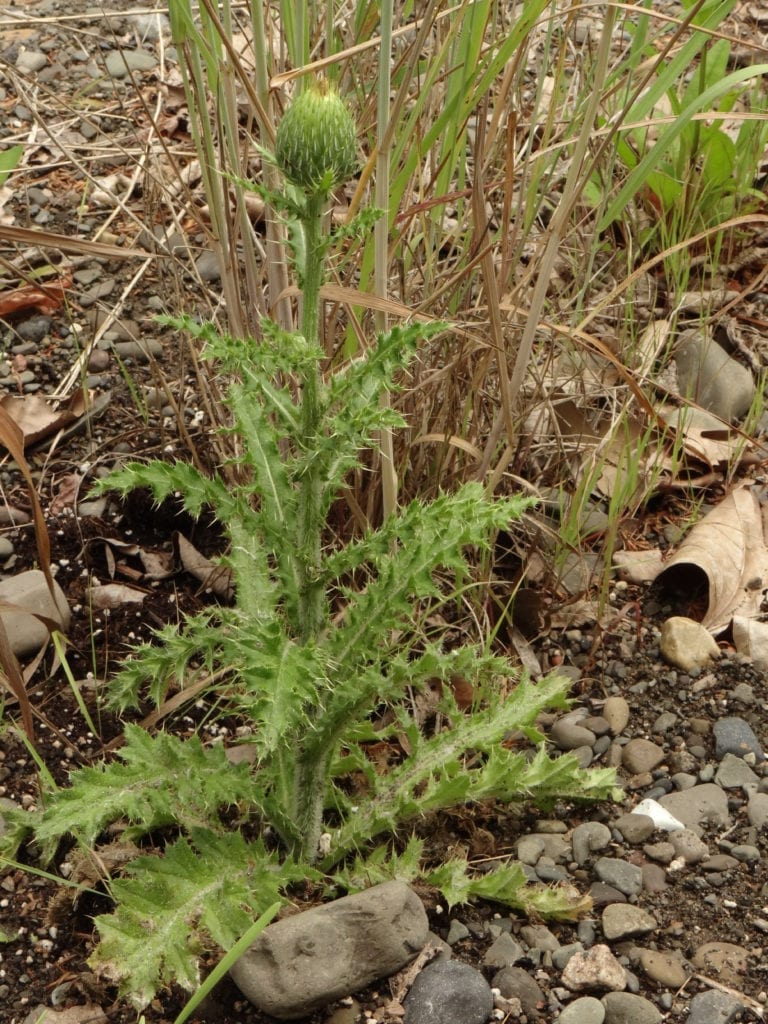 The Mundy Wildflower Garden Gabions Area is a place to make natural history discoveries. On any day it could be a large snapping turtle in the sun on a boulder in the middle of the creek, a mink rock-hopping while looking for crayfish, a belted kingfisher calling as it dives for fish in mid-stream, a Great Blue Heron standing and waiting patiently for fish, a young turtle, crayfish, or insects. Maybe it will be a dragonfly, damselfly, or the amazing eastern dobsonfly beginning or ending its life cycle. There could be a common merganser or mallard ducks flying in for a landing on the water; a Red-tailed Hawk, Osprey, or Bald Eagle soaring above.

The Mundy Wildflower Garden borders a protected waterway, Fall Creek. It is in Forest Home, an historic community near Cornell University (and within Cornell Plantations), a botanic garden, arboretum, and thousands of acres of natural areas. Come see it in each season of the year and explore a myriad of places to be with and enjoy plants, insects, animals, and people.

Krissy Boys has been a professional gardener for 25 years. Her gardening career began with native plants at the Brandywine Conservancy and Brandywine River Museum in Chads Ford, PA.  F.M. Mooberry, the founder of the Brandywine Garden and of the Millersville Plant Conference, was Krissy’s supervisor and mentor in native plant gardening. Krissy has been managing the Mundy Wildflower Garden at Cornell Plantations for 15 years. From 1992 -1999 Krissy looked after the Comstock Knoll Rhododendron Collection, the Pounder Heritage Vegetable Crop,s and the Poisonous Plants Garden. She volunteered as a land steward for the Finger Lakes Land Trust from 1992-2011 and has been a steering committee member of the Finger Lakes Native Plant Society since 1998.

Mention of products is not intended to constitute endorsement. Opinions expressed in this newsletter do not necessarily represent those of ELA’s directors, staff, or members.