By Maureen Sundberg on July 14, 2016 in Landscape Design

I remember, back in 1996, showing the late James van Sweden around a public garden project I was working on at the time, over here in England. I was trying out an approach that intermingled the perennials I was using, rather than using the block planting which was customary at the time. He was sympathetic but very definite that “the American public aren’t ready for this”. Things must be changing, as the idea of creating mixes or blends seems be gaining ground – the concept is key to the kind of naturalistic design promoted by Thomas Rainer and Claudia West’s Planting in a Post-Wild World.

Closely linked to the rise in interest in naturalistic planting and the use of native plants, intermingling offers the opportunity to create finely-textured and detailed perennial combinations. However there are plenty of potential problems. The older style of planting in monocultural blocks is relatively simple to design and maintain. With intermingling it can be difficult to design in a good graphic quality to plant combinations, and in some cases intermingled mixes can all too often end up looking a bit of an undifferentiated mess – maybe good ecologically but losing public interest and support. A particular problem is that the level of competition between species can sometimes result in one taking over and dominating. 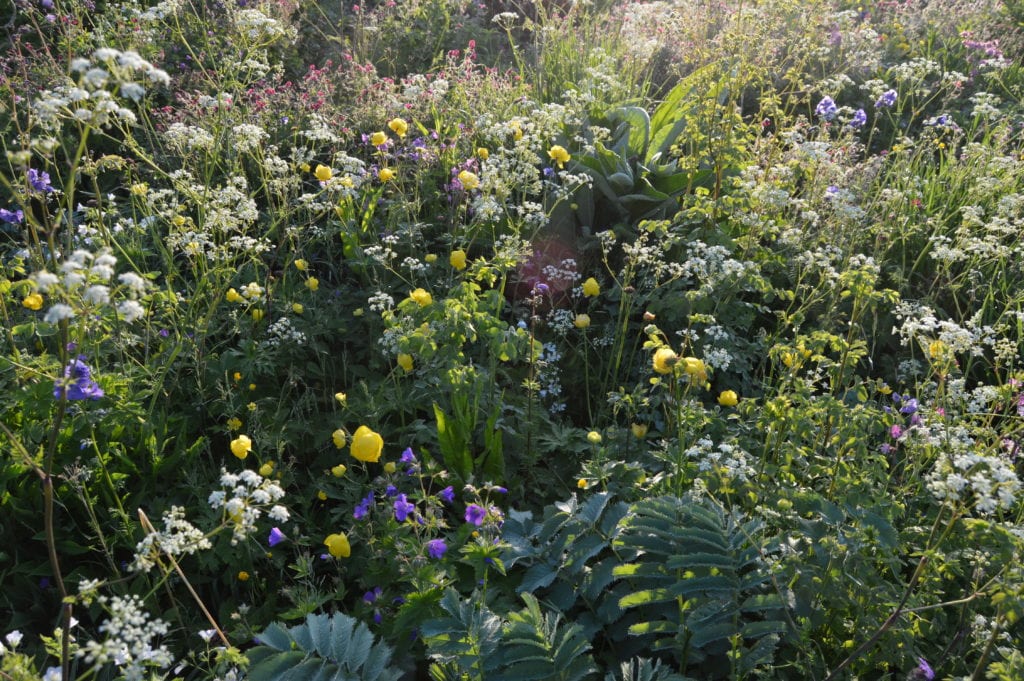 This photo taken in May this year shows my home garden in western England. We have several clumps of Trollius europaeus (yellow, globular flowers), which forms tight, only very slowly expanding long-lived clumps. Towards the rear are several groups of Geranium x monacense, with dark red flowers; these form more strongly expanding phalanx clumps. The blue flowers are Polemonium caeruleum, which forms tight non-expanding clumps. Though probably relatively short-lived, it often seeds well. In the foreground are the silver-grey leaves of Sanguisorba armena, a classic “guerrilla” spreader with underground runners emerging a foot or so away from previous positions. Throughout are the white flowers of Anthriscus sylvestris, a biennial or short-lived perennial which has to seed to survive; it germinates and grows in the gaps between everything else.

Here I would like to outline some ideas about effective design by concentrating on the shape which perennials adopt as they grow through the year. This is important for both the aesthetic impact that perennials make but also for how they will physically fit together and interact in the years after planting.

On the aesthetic front, the value of good quality foliage plants is paramount, or foliage which is just plain different to the general run of perennials. Plants with big chunky leaves, such as Asclepias syriaca, can be very useful, as can the linear leaves of irises or those grasses which form distinct tussocks such as Sporobolus heterolepis. ‘Emergents’ can also be very useful – these are those plants whose height is at least twice that of their neighbours. The effect of these taller plants is to create a sense of drama; east-of-the-Rockies natives do not offer many natural emergents, species of Silphium are probably the best, but the designer can use a mix of shorter plants and dot in taller forbs like species of Baptisia or taller grasses – the non-native Calamagrostis x acutiflora being one of the most useful.

More fundamentally, we need to think about how perennials mesh together in naturalistic intermingled plantings, which means looking at how they spread at ground level. The default seems to be those that form relatively tight, but slowly expanding clumps – most Eupatorium or the many species of Geranium. A randomised mix of these will go a good way to creating the impression of a natural plant combination, and this approach is at the core of the very successful ‘Mixed Planting’ approach in Germany which has resulted in over thirty plant mixes being commercially available. 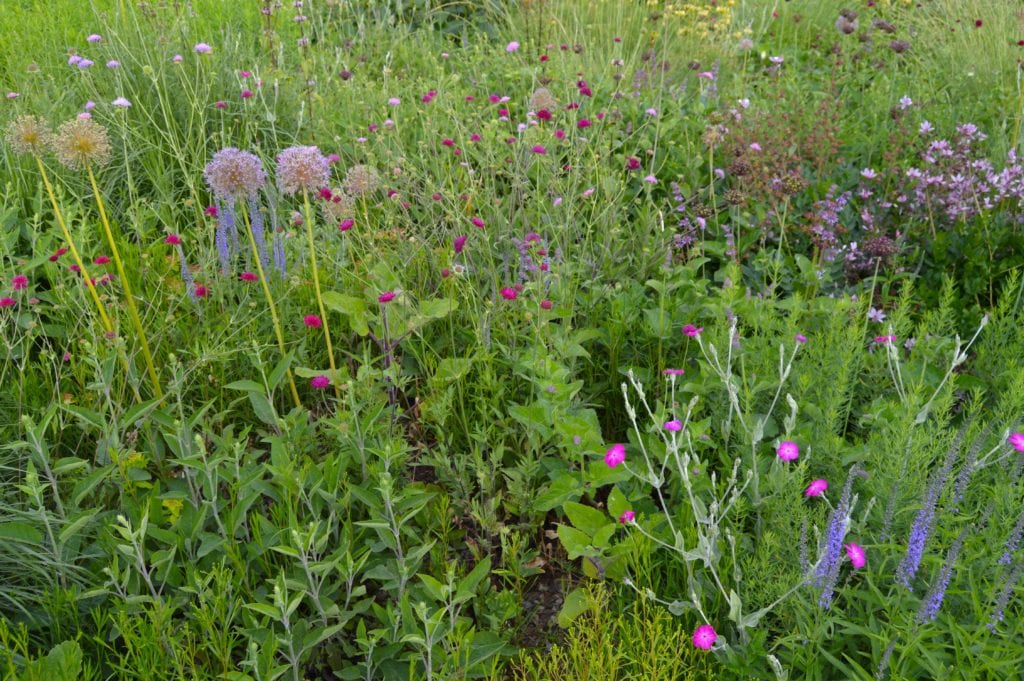 On dry or less fertile soils, there is reduced competition between species, so intermingling is easier to achieve. Here, at the Hermannshof Garden in central Germany, a planting designed for a calcareous dry soil achieves a balance between a wide variety of species, some, e.g. Veronica longifolia (blue spike, right foreground) are long-lived clump formers, whilst others are short-lived species which seed around in the gaps between other plants, e.g. Knautia macedonica (crimson heads) and Lychnis coronaria (pink, foreground). There are around 15 species in this mix.

However, perennials take other forms. Some form more quickly-spreading, looser clumps – Rudbeckia fulgida being a good example. Interactions with other plants will tend to result in the break-up of these clumps and some complex co-existence patterns developing. More extreme are those perennials which send out adventurous runners which pop up some distance from the parent. Ecologists have dubbed these ‘guerrilla’ spreaders, as opposed to the more predictable and steady advance of the ‘phalanx’ clump formers.

Make Use of Guerrilla Plants

The guerrilla spreaders have a bad reputation with conventional gardeners and designers, who tend to see them as the Vladimir Putins of the plant world. This is however a mistake, as very few guerrilla spreaders necessarily follow up their exploration with outright conquest. In the conventional garden such plants rapidly fill empty space, but in the denser world of the naturalistic planting their opportunities are few and they can only grow where other plants allow them. They tend to be gap fillers, and indeed their survival strategy seems to have evolved to exploit short-lived gaps and to be always on the move. For those of us who want to evoke the spontaneous look of natural plant communities, guerrilla spreaders offer a very good way of doing just this, and the traditional attitude of fear needs to be rejected. Most of us who let these plants rip tend to find that they move around in plantings and rarely suppress other species. The already mentioned Asclepias syriaca is a good example, as are several Helianthus species. 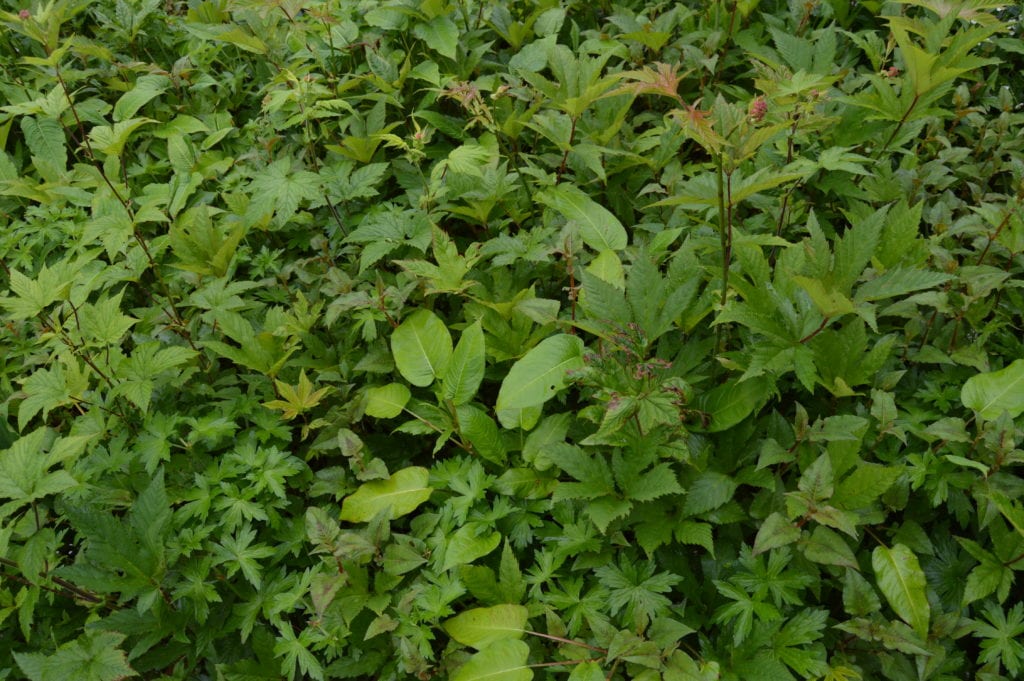 It can be easier to appreciate the detail of intermingling before flowering. Here, in a lushly moist garden situation at the Jardin de Berchigranges, in eastern France, three strongly competitive species manage to share space: the red-toned leaves of Filipendula rubra (Queen of the prairie), the broad leaves of Persicaria amplexicaule, and the smaller leaves of Geranium palustris. Each has a slightly different spreading mechanism, which almost certainly helps their co-existence: the filipendula is a guerrilla spreader, the persicaria forms extensive clumps but has rhizomes which do not completely dominate the ground, while the geranium forms small clumps and often seeds itself.

One reason that such runners make good plants to have in intermingled plantings is that their growth patterns imitate what happens when plants seed around. Seeding, and the genetic diversity it generates, is of course one of the key ways in which a planting moves beyond something artificial and becomes the beginning of a real ecosystem in its own right. Seeding however is far more unpredictable than vegetative spread, as many factors are involved: soil type, moisture levels, competition from established plants, etc. Some perennial species are notably more likely to seed around than others, most markedly those with shorter lifespans – non-clonal species which cannot spread themselves vegetatively like those we have been discussing so far. Such species are very useful for filling the gaps between clumps of more truly perennial plants and can be regarded as having a ‘repair function’ – if gaps occur in a planting through plant death or damage, they will be the ones which will seed into and fill them most readily.

Good intermingling requires that the planting designer makes close observations of the plants they use, throughout the year. Knowledge and experience built up this way can help shape effective and long-lasting plant combinations.

Dr. Noel Kingsbury is internationally known as an innovator and author. He has worked on both private gardens and public spaces developing nature-inspired planting, and has written about garden design, green roofs, and the politics of gardening. A great believer in using science to inform our gardening, he completed a PhD with the University of Sheffield in 2008 with a focus on the selection and management of ornamental perennials. In addition to taking on his own design projects, Dr. Kingsbury writes for the UK and US garden press and has written 20 books. His latest publication, Plant Selection: Learning From Nature is a reference for landscape architects and designers to help select plants that are ecologically suited to the site. In between traveling widely, and continuing his plant research, he gives plants and gardens trial runs at his home on the England/Wales border.

Mention of products is not intended to constitute endorsement. Opinions expressed in this newsletter do not necessarily represent those of ELA’s directors, staff, or members.