By i.am.georgia.harris on July 15, 2021 in Developing Healthy Landscapes, Restoration

Imagine two woodlands. Both have deciduous, fire-adapted trees overhead (mostly oaks and hickories). One has widely spaced trees, and sunlight reaches a diverse community of grasses, sedges, and forbs. The other has a dense thicket of shrubs (primarily introduced buckthorn, Rhamnus cathartica) that makes walking difficult and shades out all but the earliest spring ephemerals. Now imagine you want to turn the shrubby woodland into a sunny one. If you remove the shrubs, will the light that reaches the bare soil trigger a profusion of native plants, restoring the diverse community that lived there hundreds of years ago?

There are occasional, exciting success stories, and the appeal of the soil seed bank regenerating the landscape is understandable. If restoration practitioners and ecological gardeners can count on the soil seed bank, they can spend less time collecting and sowing seeds. There’s also a desire for authenticity and continuity. If the soil does contain species that were present before Europeans stopped millennia of indigenous stewardship, then the restored community will be much more resilient and appropriate to the site. Another philosophical question hovers around the edges: does nature function best when people clean up their messes and get out of the way, or when they take a more active role? 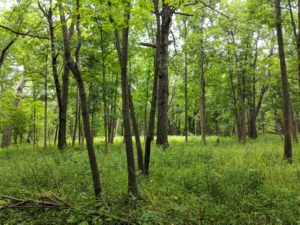 Harms Woods is a restored woodland in Glenview, IL. 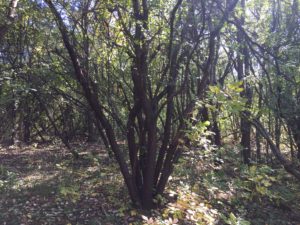 The problem is that it’s hard to guarantee success when relying on soil seed banks. How can we know that the plant community that germinates after we remove a buckthorn tangle will be one that we want, not just more buckthorn or garlic mustard or another headache? Research suggests this technique can help restore wetlands because those plants evolved with scouring floods, and the longevity of buried seeds is crucial. It doesn’t generally work for prairies, partly because plowing and other disruptions introduced by European settlers have depleted soil seed banks and partly due to the nature of prairie plant communities. Prairies go through successional stages as they develop, and the weedier plants of the earliest stages are the most likely to survive in the soil and recolonize after a disturbance. Whether the soil seed bank can help restore deciduous woodlands is less understood.

In 2016 I was a graduate student at the Chicago Botanic Garden, where, with scientists and staff, I studied woodland soil seed banks to help practitioners make difficult restoration decisions. In the Chicago region, volunteer land stewards with groups like the North Branch Restoration Project have spent countless hours over the last 40 years restoring oak woodlands and spearheading much of what we know about ecological restoration in the Midwest. The preserves they care for are beautiful and serve as essential habitats in an urban area. In and around the city, these woodlands have a history of fragmentation and fire suppression that has encouraged the proliferation of woody shrubs like buckthorn. The still unrestored sites are a good stand-in for suburban, fragmented woodlands throughout eastern North America, which are prime targets for restoration.

We wanted to answer the question: what would happen if we removed buckthorn and other introduced shrubs and allowed the soil seed bank to germinate without sowing additional seeds? We wanted to characterize the plant community that would show up in the crucial early years of restoration. To begin, we paired unrestored woodlands (no history of shrub removal, seeding, or prescribed burning) with restored woodlands (more than ten years of shrub removal, seeding, and periodic burning). Ideally, we would have used a reference community (an ecosystem that’s remained relatively unchanged since before the European invasion) instead of a restored woodland, but land management changes are so widespread in this region that there are few unaltered woodlands left. We surveyed nine unrestored and nine restored woodland plant communities within the Forest Preserves of Cook County. From each, we took two soil seed bank samples that we germinated back at the Chicago Botanic Garden. 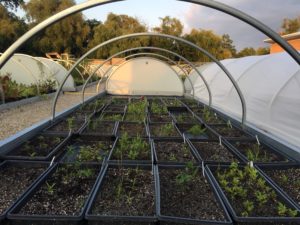 Our germination protocols were low-tech and could be replicated with nursery flats and some seed starting mix: 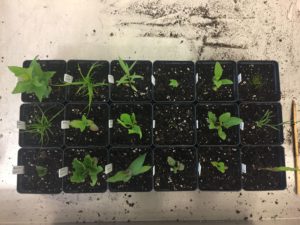 Seedlings potted up to encourage growth and flowering that will facilitate identification.

By every metric we tested, unrestored soil seed banks were far less diverse and bore little resemblance to the aboveground plant communities of restored woodlands. This means it’s unlikely that a soil seed bank would produce the diverse plant community that is the target of a restoration project. Unless a germination test indicates otherwise, supplemental seeding is probably necessary to achieve restoration goals. In our tests, the most abundant species of unrestored soil seed banks were buckthorn and early successional species like Juncus tenuis (path rush), Potentilla simplex (common cinquefoil), and Solidago canadensis (Canada goldenrod). Species in restored soil seed banks were more likely to have a high coefficient of conservatism, a measure of habitat specificity and sensitivity to disturbance, and included woodland grasses (Cinna arundinacea, Brachyelytrum erectum), sedges (Carex hirsutella, Carex squarrosa), and forbs (Symphyotrichum drummondii, Solidago flexicaulis).

Interestingly, there was no difference in the number of non-native seeds between restored and unrestored soil seed banks, but restored soil seed banks had nearly three times as many native seeds. This means there is not a disproportionate number of non-native seeds waiting to take over, but there is a lack of native seeds available to compete. The long history of grazing and plowing these spaces may have eliminated the soil seed banks of native plant communities, leaving an open niche that was filled by buckthorn when the land was abandoned by farmers. Returning seeds to the soil through active stewardship is, in effect, rebuilding the land’s resilience.

It’s tempting to think of non-native shrub-like buckthorn as a driver of ecological degradation and that, if we can just get it out of the way, nature will spring forth rejuvenated. It’s more likely a symptom of centuries of harmful practices that started when indigenous people were forcibly removed from their land. These woodlands are the product of millennia of careful stewardship by people like the Pottawatomie in the Midwest. They can only be healed through developing a relationship with the land, something practiced by indigenous land stewards and beautifully explained by scholars like Robin Wall-Kimmerer. Work like this is never done, but it can be endlessly rewarding with some commitment and flexibility, like watching seedlings come up in a sunny woodland. 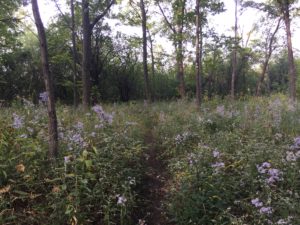 Nathan Lamb is an ecological garden designer and consultant living in southern Rhode Island. He worked in stream and wetland restoration, field conservation, and public horticulture before getting an MS in Plant Biology and working as Assistant Director of Heronswood Garden in Washington. Now he helps people grow resilient gardens that support wildlife, require fewer inputs, and evoke the beauty of wild nature. He can be reached through www.gardenecology.us.