By Maureen Sundberg on June 16, 2018 in Landscape Design, Native Plants

When most people think of ferns, they picture delicate quivering fronds blowing in the breeze next to a rippling stream deep in the forest. Or they think of forested swamps with tall ferns growing among the maples. Sometimes we think of fern-covered stone walls rambling unexpectedly in the woods. All of these scenes are realistic in nature, but ferns will also do very well in the designed or built garden.

Ferns are an important component of the garden, lending unusual textures, colors and forms to the design. In order to pick the right fern, we need to start with some fern basics – this will help you to determine which plant best suits your needs.

The whole “leaf” is called a frond, the smaller leaflets are pinnae, the stalk of the frond is the stipe and the whole stalk that bears the pinnae is the rachis. Ferns have three distinct growth habits, but all ferns spread by rhizome (the underground root system). The vase-shaped ferns tend to be the slowest to spread. These are often larger ferns (over 18 inches) that form a circle of fronds emerging from the ground to form a vase. Slow creeping ferns will run through the garden and often form fairly dense mats of fronds. Fast creeping ferns are the aggressive ones. They are also often the most adaptable, tolerating poorer soils or more challenging conditions, and spread quickly.

Most ferns prefer some organic material in the soil. The addition of compost or humus to the garden can be helpful to establish most ferns. Most species prefer a shaded location, including the north side of a building. Some species tolerate part sun and a few will even grow in full sun.

Let’s take a look at a variety of native species that are easily adapted to use in landscaping.

The fiddleheads of the Goldie Fern (Dryopteris goldiana) are large and very scaly. They look like animal paws on the surface of the soil. Their beautiful golden-brown scales gleam in the spring sunlight and attract your attention. The fiddleheads unfurl to large ovate fronds with the scales remaining at the base. This fern has a coarser texture and grows to 36 inches. I plant it along the path to observe the fiddleheads, but its size also makes it a great background plant.

Marginal Wood Fern (Dryopteris mariginalis) is a smaller vase-shaped Wood Fern, growing to only 18 – 24 inches. It is also very scaly as a fiddlehead but retains its scaliness throughout the season. The deep golden scales provide summer interest and its dark green fronds persist late into the fall and early winter for late color in the garden. Marginal Wood Fern is tolerant of drier soils. It still likes organic matter, but has no problem thriving in our drier fall season.

Christmas Fern (Polystichum acrosticoides) gets its name from the “stocking shaped” or “boot shaped” pinnae. Christmas fern has deep emerald green fronds that persist through the winter, creating some winter interest in the garden. It is not truly “evergreen” as the overwintering fronds drop down and die back each spring as new ones emerge. Christmas Fern is tolerant of both moist and dry conditions in the garden. It forms a mound and grows to a height of about 12 inches. 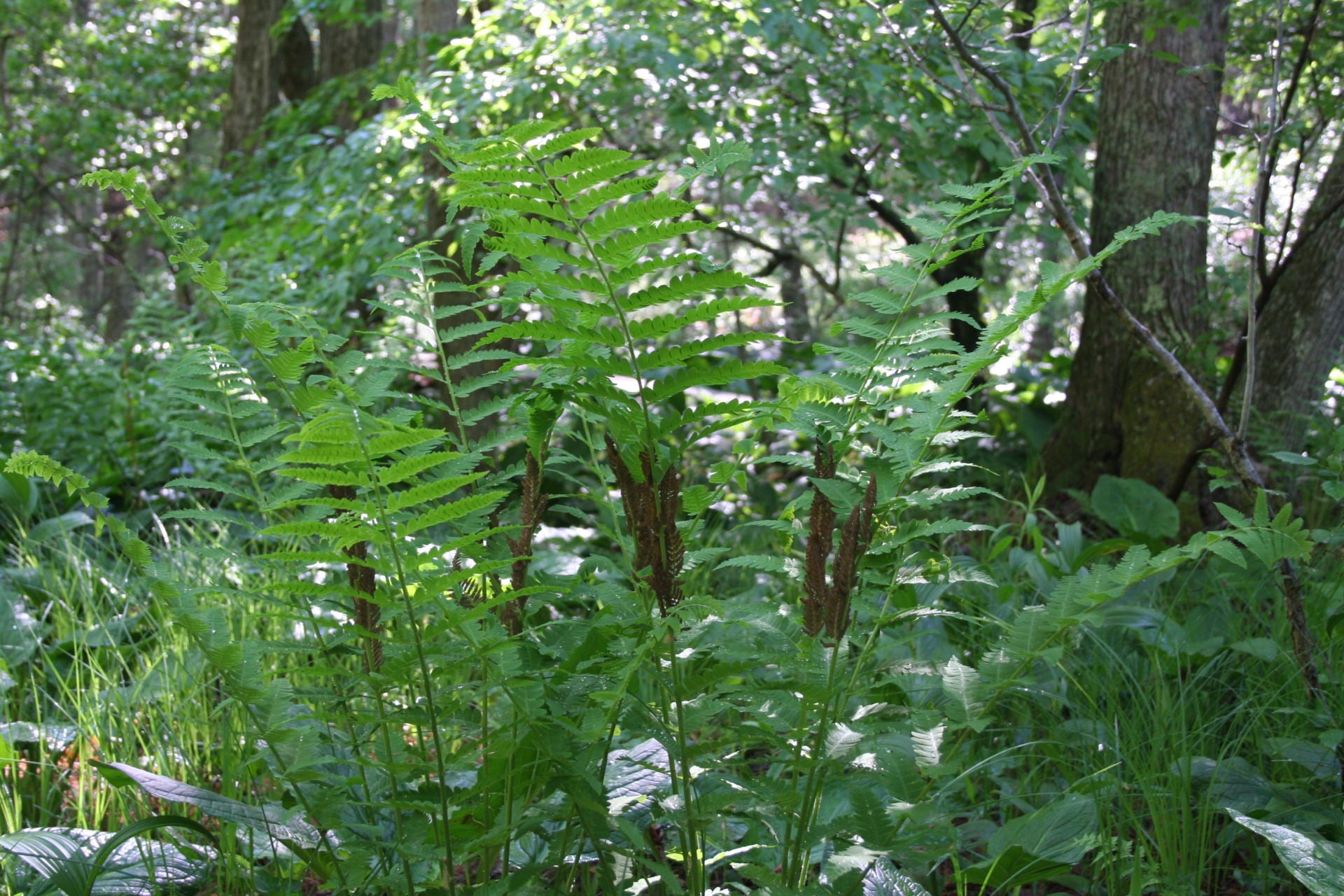 Interrupted Fern (Osmunda claytoniana) is a large, coarse fern that grows to a height of about 36 inches and prefers wet to moist soils. Commonly found in wetlands, it will grow in organic soils in upland sites. The most interesting characteristic of this plant is the separate vegetative and fertile parts of the fern are represented as separate pinnae. The deep black to olive fertile pinnae appear in early June and drop off during the summer. Only careful observation of the frond will reveal where they were in spring.

Lady Fern (Athyrium angustum) grows to a height of about 24 inches. It has a pale green color and a very soft texture. Its finely divided pinnae make it a great choice for any location in the garden. There is a red-stemmed variety that compliments  plants with reddish foliage or flowers. “Lady in Red” is the cultivated variety, but there is also a native form with red stems that is striking as well.

Silvery False Spleenwort (Deparia acrostichoides) has a soft silvery tint to its fronds due to a fine layer of fuzz or hairs on the stalks. I love the way it spreads through the garden; its medium texture and silvery sheen adding interest among the wildflowers. Silver False Spleenwort grows to about 36 inches, is easy to establish, and is a must for full shade and slightly damp locations. 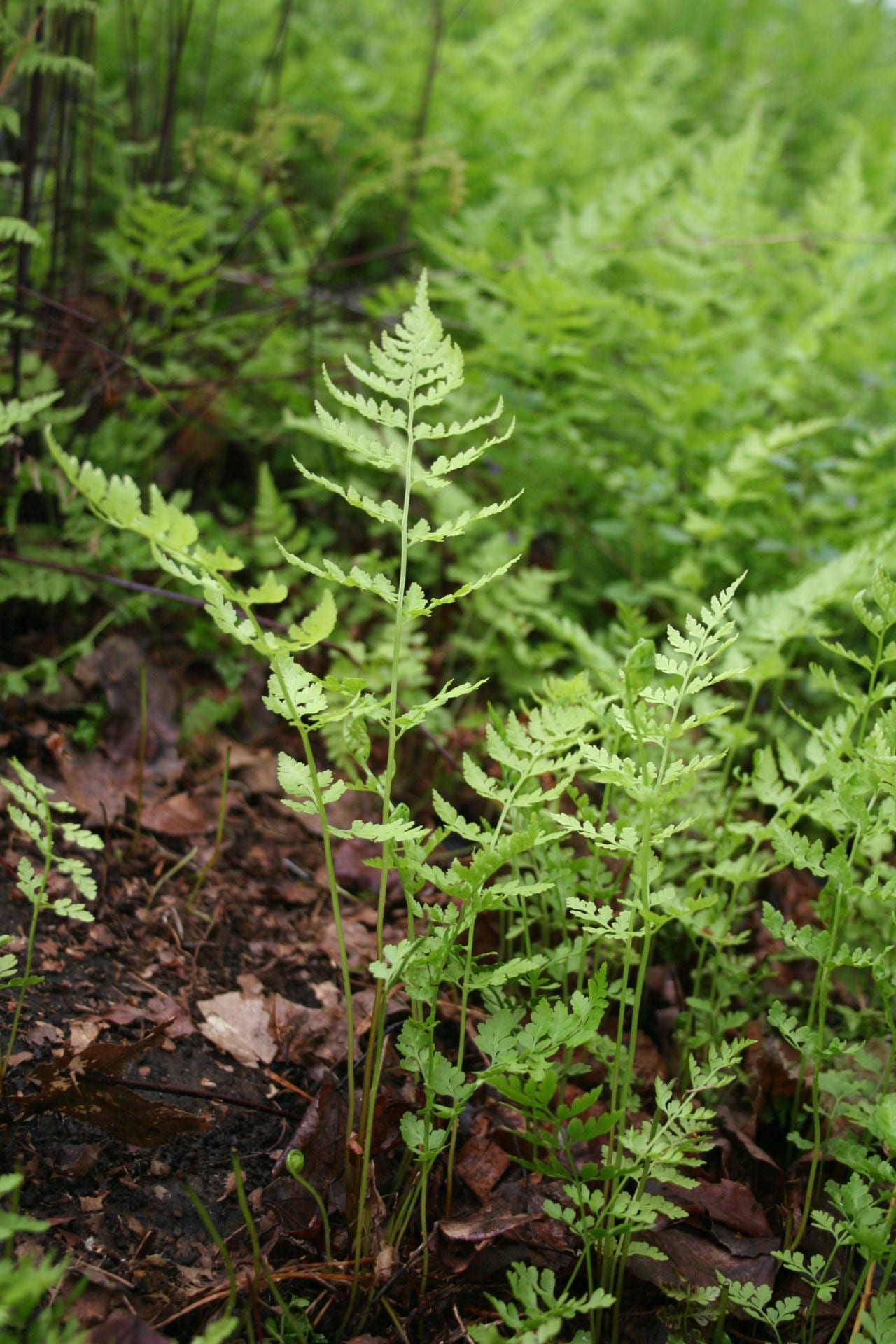 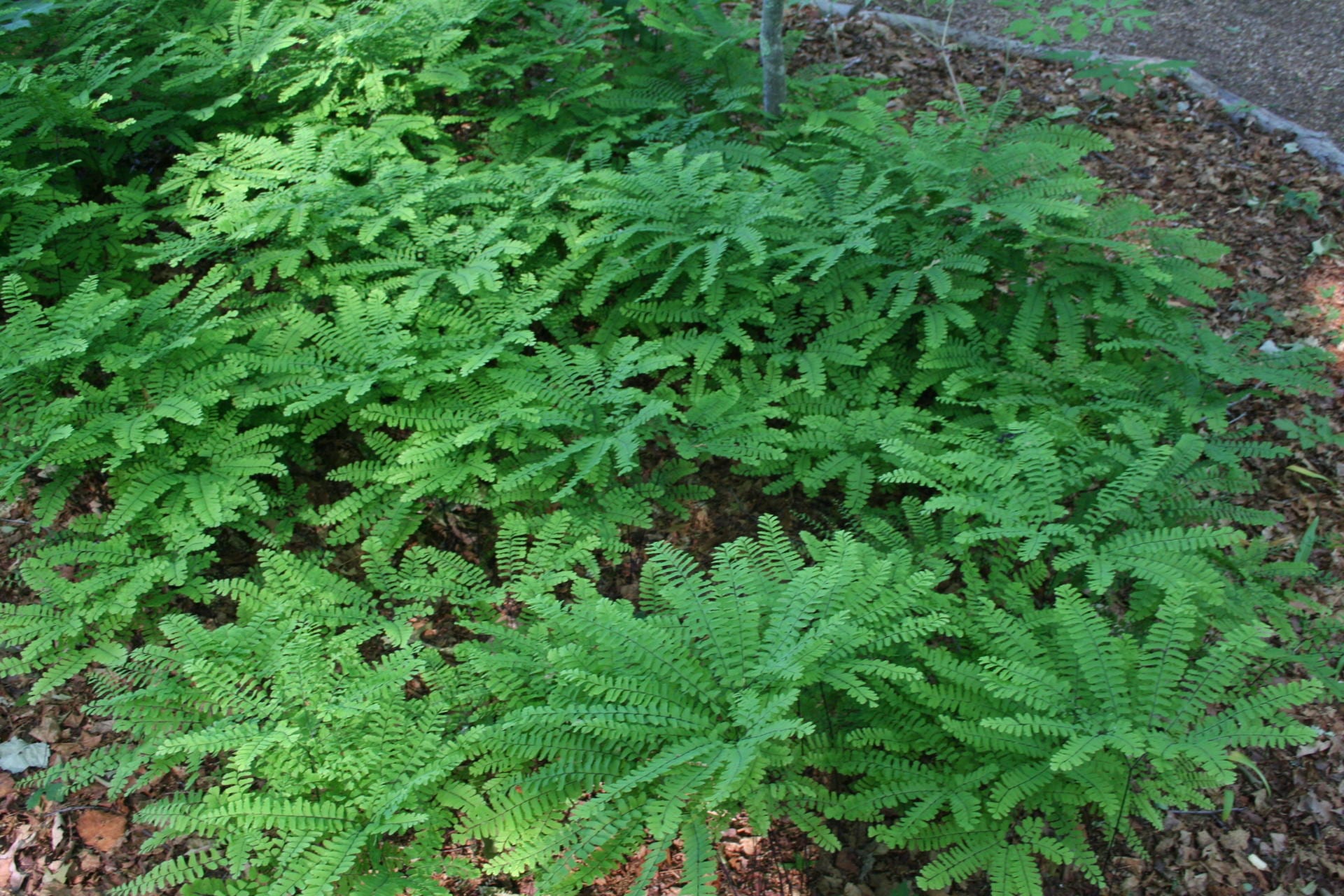 Maidenhair Fern (Adiantum pedatum) is a fan favorite. I have met few who are not thoroughly enchanted with this plant. Its ebony rachis and light green fan-shaped pinnae create a beautiful specimen. Maidenhair fern will grow to about 18 inches and its dense clump expands in girth over time. It is tolerant of sunnier locations and does very well in full shade. It is not fussy about soil conditions growing in moist to dry soil, but it prefers a neutral pH. Maidenhair Ferns stay green late into the fall. There is also a dwarf form which may be more difficult to find, but is worth the look.

Broad Beech Fern (Phaegopteris hexagonoptera) is a more challenging fern to get established, but its wavy margins, broad triangular frond and distinctive look makes it worth the effort. Broad Beech Fern tolerates average to dry soil moisture, but plenty of organic matter is a must. This plant is slow to get established, but once it becomes established it does well. Its sister plant Long Beech Fern (Phaegopteris connectilis) has a longer triangular frond and similar cultural requirements. 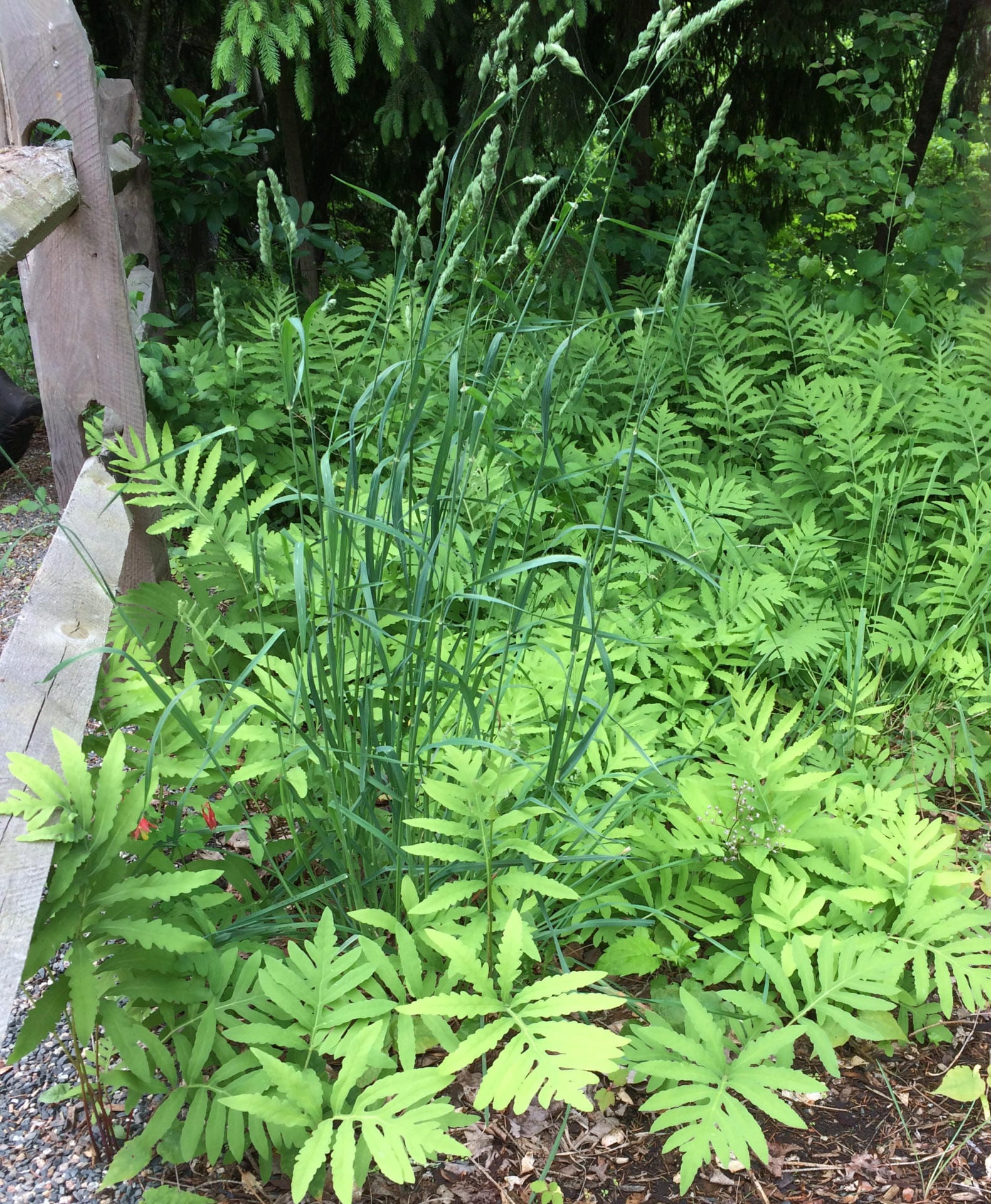 Sensitive Fern (Onoclea sensibilis) prefers moist to wet soils. It has a unusual frond that has large, lobed pinnae and a separate distinctive frond which bears the spores. It is slow creeping and at a height of 12 inches it can be a ground cover for difficult, wet locations. It also looks good throughout the year. Its fertile frond remains standing through the winter for interest in the garden. 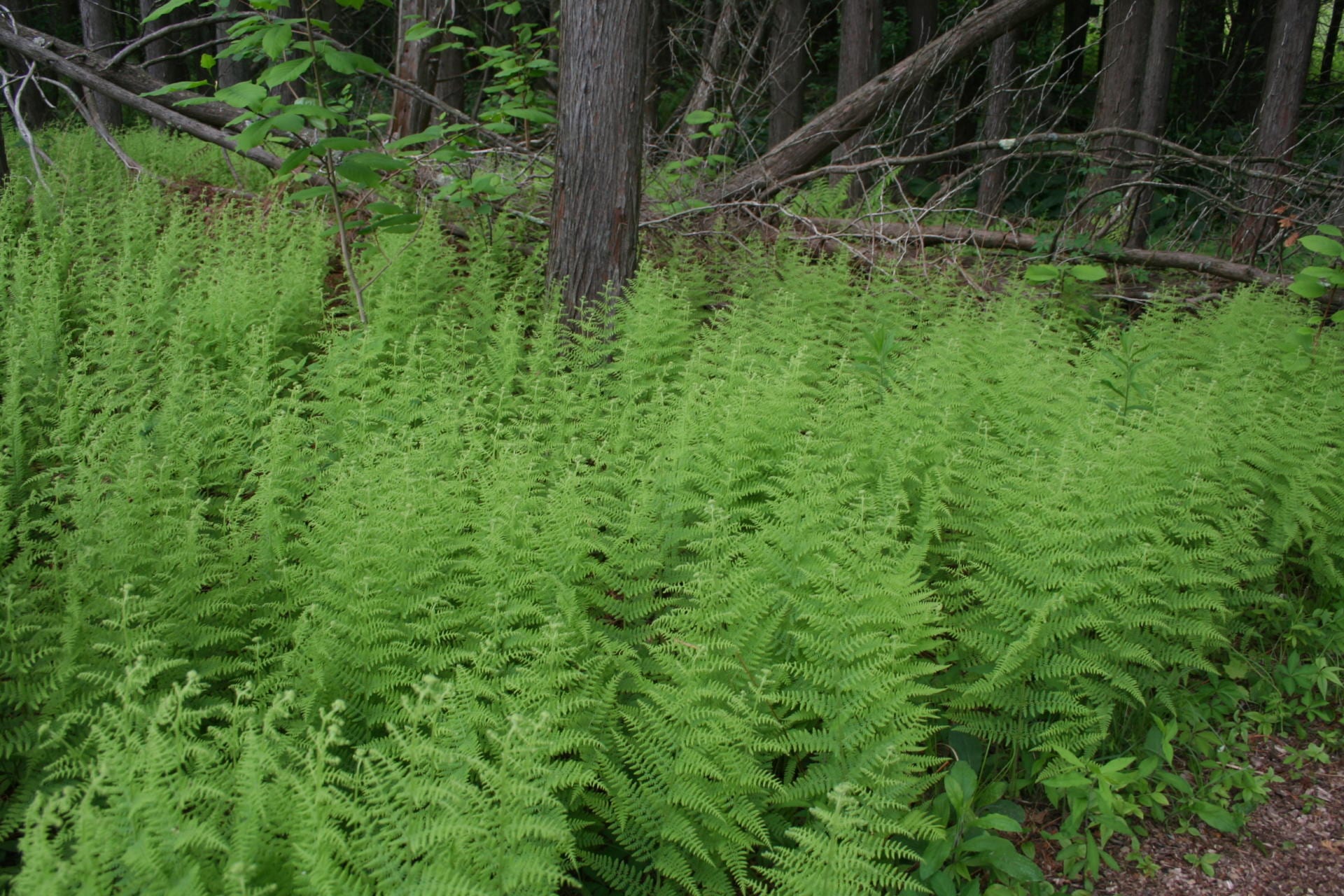 Hay Scented Fern (Dennstaedtia punctilobula) has some great attributes, but it is a long-creeping, aggressive fern. It does not belong in confined spaces or a garden setting. It is, however, a good plant for difficult spots. Use it for naturalizing under a maple tree, its soft green texture and color is beautiful in the summer, and it has a distinctive yellow color in fall. This fern prefers average to dry soils and tolerates a fairly sunny location. It grows to a height of about 18 inches.

Rock Polypody (Polypodium virginianum) prefers a rocky location. These ferns thrive in minimal organic soils on rocks, or in a gravel/humus mix. They grow to a height of six inches and are easy going, good for a rock garden or between stones. This is a short-creeping fern.

These are just a few examples of our native ferns. There are many species of native ferns and even more non-native ones. Most of the world’s ferns grow in tropical regions, but there are plenty of species that can be found in every habitat in the Northeast. From rock gardens to woodlands ferns are a great garden and design component with unusual form and texture that the average person often overlooks. Take a chance; try something new. Discover some of the unique characteristics of these species as you wander into the ferns.

Leslie Duthie is a horticulturalist at Norcross Wildlife Sanctuary. She has dedicated her career to learning about, gardening with, and propagating native plants. A life-long gardener, Leslie’s devotion to ferns began the first time she grew a fern from spore. The gardens of Norcross are full of plants that she has raised and her knowledge of the ferns is extensive. Leslie has a BS in Plant Science and has experience in greenhouse growing of both landscape plants and native plants. She works with the local Land Trust and Conservation Commission to preserve land for both our native plants and wildlife as well as for people to enjoy.