Both milky spore disease and beneficial nematodes help control grubs in lawn and garden. Depending on the species of grub, you may want to use both.

Scarab grubs, the broad group of white grubs that feed on grass roots, are difficult to differentiate. The only sure way to identify one positively is to look at the raster pattern on its rear end. Illustrations of these raster patterns can be found in books and articles about insect pests, but a good, quick source great illustrations can be found at http://entomology.osu.edu/schoolipm/IPMfiles/AllRasters2labeled.jpg. 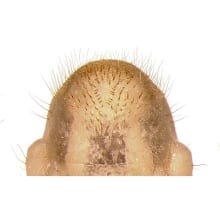 If the grubs infesting your lawn or garden are identified as Japanese beetle larvae, then milky spore is probably the better choice because its effects can last fifteen years or longer. But, in colder climates, it may take two to four years for the active organism, Bacillus popilliae (Bp), to completely inoculate the area treated. If the infestation is large enough (>10 grubs per square foot), you can use beneficial nematodes and milky spore powder at the same time. The nematodes will give more immediate control while milky spore inoculation is spreading. 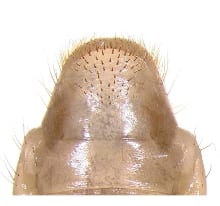 If the grubs in your lawn are identified as chafers or any species other than Japanese beetle larvae, Bp probably won’t be effective. There are species of Bacillus bacteria that cause milky disease in other scarab larvae, but they are not currently available. Nematodes may be the only natural option available to you.

If nematodes are applied once or twice per year, there is evidence that their populations begin to sustain themselves after two to three years. There is no data available, however, that suggests how long they will last. If nematodes are applied only once and hot dry conditions persist after application, they may have to be re-applied at some point.

The species of nematode applied is also an important consideration. Steinernema spp., for example, are typically an ambushing strain and dwell closer to the soil’s surface than Heterorhabditis spp. Heterorhabditis spp. are typically hunters that can track grubs by following trails of exudates. These nematodes can be found much deeper in the soil than Steinernema and may be more appropriate for controlling scarab larvae. When larvae are infected with Heterorhabditis, they usually turn shades of red.

Nematodes multiply inside the grub host from one or two to hundreds of thousands in just a few weeks. If, however, they are exposed to direct sunlight for more than a few minutes during the application phase, the UV light will sterilize them. They can still infect and kill larvae but cannot multiply. The Steinernema spp. are sexual and at least two need to enter a larvae to multiply. Heterorhabditis are asexual and one can multiply by itself.

The Importance of Timing

Another grub control strategy that may work is to repel adult beetles before they lay eggs. Products containing garlic, pepper, or other repelling extracts can persuade adult beetles to oviposition elsewhere. For this strategy to work, the repellent must be applied before the beetles arrive, which requires some knowledge of the pest’s life cycle. Timing is crucial.

In fact, timing is important regardless of the control you choose. Nematodes should be applied early morning or early evening to avoid direct sunlight. Applying them on a cloudy day is fine and during rain is ideal. They don’t usually need to be watered in but should not be introduced to a dry soil. Nematodes move through soil moisture and can migrate easily into a moist soil. Applying after rain or irrigation is best.

Timing with milky spore is not as important. The spore is a dormant organism, and it only becomes active after a warm Japanese beetle larva has ingested it (larvae are cold blooded and may not activate a Bp spore if ingested by a grub that’s not warm enough). If milky spore powder is applied to frozen ground, it may wash away during heavy rainfall. Milky spore powder is typically applied in a matrix pattern, a teaspoonful every four feet in rows four feet apart. Some newer formulations allow for application through a drop spreader. It is much easier to apply but must be applied three times a year for two years as opposed to just once. Milky spore cannot be effective if there are too few grubs to spread the disease. The greater the number of grubs, the faster the disease will spread. When determining the timing of any control, be aware that evidence of moles is not necessarily a sign of grubs. Moles eat earthworms as well as grubs, and sometimes their tunnels result from mating activities rather than grazing.

All grub controls are more effective at the earlier grub instar stages. Beetles that lay eggs in summer produce young, smaller larvae in late summer/early fall. That’s the best time to apply nematodes. The larger larvae are usually evident in spring and summer and they are harder to control.

Paul Sachs is founder and managing member of North Country Organics, a Bradford, VT- based Manufacturer and supplier of natural land care products. He has studied natural soil system dynamics for close to 30 years and is considered one of the foremost authorities in the country on organic land care. He has written five books, hundreds of articles for trade journals, and speaks regularly at association conferences for professionals involved in both agriculture and horticulture. He has served as a member of the Technical Advisory Panel for the National Organics Standards Board of the USDA and is currently a board member of OMRI (the Organic Materials Review Institute).  You may reach Paul through his website: http://www.norganics.com.