This article in EcoRI News and is reprinted here with permission.

By the end of this century, scientists predict southern New England’s seas will rise some three feet, and without major cuts to greenhouse gas emissions, they say summers here will soon resemble Georgia’s dog days.

Like the rest of the planet, southern New England’s climate is changing, and not all of the changes are as noticeable as, say, three straight days of rain that dump a foot or so of water (2010), an October snowstorm (2011), or a superstorm that hangs around for a few days (Sandy, 2012). 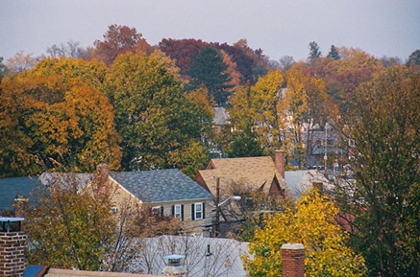 Urban trees, such as these in Providence, provide many benefits, from protecting public health to keeping ecosystems resilient. Plus, they brighten up the New England fall. (Frank Carini/ecoRI News)

Some changes are less obvious, such as the 10-inch rise in sea level that has taken place along the Newport shoreline since 1931, or the greater frequency of 2-inch rainfalls since the 1950s. There’s also the often-unseen toll the changing climate is having and will have on infrastructure and buildings.

Planting for the Future

In October 2013, Boston officials released a report entitled “Climate Ready Boston,” which listed things the city should be doing to adapt to climate change, such planting more trees to lessen the heat-island effect and help cool a warming city.

But what kind of trees should we be planting? It’s not our father’s southern New England anymore. In the past decade, the region has witnessed an increase in extreme rain and snowfall events. Southern New England is becoming wetter and warmer, which means trees that once thrived for centuries may not stand up to climate change.

Climate scientists have told Chicago officials that their city will feel more like New Orleans by 2050. To prepare, the city has started planting sweet gums, swamp oaks and other heat-tolerant trees instead of white oak, the state tree of Illinois.

For trees to reach their expected lifespan — 90 years or so — they must be able to endure changing conditions. A changing climate also means trees must deal with stressors such as insects and disease, according to Doug Still, Providence’s city forester.

To deal with climate change and the additional problems it creates, Providence’s tree-planting efforts are centered around diversity. “We haven’t changed our plans too much to accommodate climate change specifically,” said Still, the city forester since 2005. “It’s about planting a diverse mix to create an urban forest that is resilient.”

Still is a member of the Society of Municipal Arborists and said the organization has discussed the impact climate change is having and will have on urban tree populations.

He noted that Providence is now at the southernmost tip for sugar maples. The city now only plants a few sugar maples a year, mostly in Roger Williams Park, because warmer conditions make it more difficult for the species to thrive. Scientists say the leaves of sugar maples in New England are less brilliant in color and their sap less sweet. A changing climate, they say, is to blame.

In fact, climate change has municipal planners concerned about the health of their trees, and for good reason. Changes in temperature and precipitation patterns could stress the region’s trees, and increased flooding, especially of the salt-water variety, could be damaging, according to the 29-page Climate Ready Boston report.

Besides their beauty, trees, especially those in urban settings, provide shade, improve air quality and mitigate stormwater runoff — their leaves keep about 20 percent of rainfall from hitting impervious surfaces such as pavement and concrete. 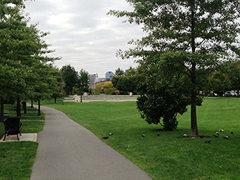 A row of trees along a city street can decrease the air temperature by several degrees, according to a 117-page study entitled “Building Resilience in Boston.” Shade trees planted immediately adjacent to buildings can directly reduce air-conditioning costs by 40 percent, according to the July 2013 report.

Trees also are an important part of southern New England’s history and character, are an important asset for public health and quality of life, and play a key role in maintaining healthy ecosystems.

In fact, trees help lessen the impact of climate change, even as they too are threatened by it — the same can’t be said of us. According to a recent study of Providence’s urban forest, the city’s 415,000 or so trees annually remove 91 tons of pollution, sequester 4,030 tons of carbon and eliminate 31 million gallons of runoff.

These services provide an environmental benefit of $4.7 million annually, according to the “Providence’s Urban Forests: Structure, Effects and Values.”

“All that biomass in the air that urban trees provide collects pollution and catches rainfall,” Still said. “They help lessen the impact of ground-level ozone, which causes respiratory problems.”

Frank Carini has more than two decades of journalism experience, and has spent time as both a reporter and an editor. He has won several newspaper association awards for column writing, reporting, headline writing and page layout. He has worked at a variety of publications, from a metropolitan daily to a small daily newspaper to several weekly papers. As sports editor for The Cincinnati Post, he realized his boyhood dream of working in the field of sports journalism at a major daily newspaper. His more recent passion, however, is telling the stories — the good, bad and ugly — of our environmental successes and failures. He stands by the motto: “We only have one planet and we need to treat it better.” The Providence resident and Medway, Mass., native left the mainstream media to launch ecoRI Inc. in September 2009. Contact him at frank@ecoRI.org or by calling 401-678-0206