I am typically introduced to a project over the phone. I love to listen to clients’ descriptions of their property as I develop an image in my mind. I often sketch as they speak to me telling me what is working and what is not. I note the adjectives they use when describing their setting. “Hilly, shady, exposed, overgrown,” and always, “nothing will grow”. Then the fun begins as I ask them what they want. “Privacy, flowers, and an outdoor room” top the list. I generate a sketch based on their descriptions trying to understand what is wrong and what they want their properties to become. The next step is a site visit.

Allowing a few extra minutes, I arrive early. I am eager to see the site and compare the real thing to my notes and sketches. I am usually surprised as I approach the property. Predictably, I see something much more beautiful than what has been described. I see great potential based on the existing conditions and am eager to work with my client.

As we walk the site together, I instinctively begin to “read the land” – assessing grades, topographical changes, vegetation density, etc. As a graduate of the Conway School of Landscape Design, I see the interrelationship between form and function. For me, the landscape dictates the design direction automatically. Working with natural systems such as water flow, wind tunnels, and shady banks create opportunities for design. I often look at the site and let it help me with what is needed. 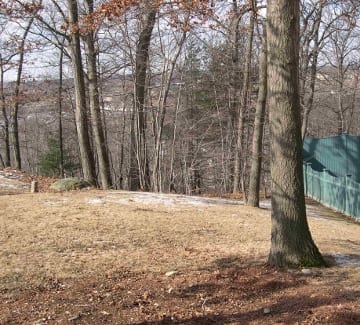 The land drops steeply from the deck into a wooded area.

One wintery morning I was introduced to a site in Reading, MA. It had every existing challenge you could think of. Steep slopes, dense shade, noise from nearby freeway. My new client however was an optimist. Her difficult setting did not stop her from dreaming. She wanted running water to buffer the sound of the highway. She hoped for some level play space for kids and ultimately, she wanted areas outdoors for entertainment.

There was house construction planned to open up the East side of the house with windows and French doors. On the exterior, the land sloped as it ran along the house dropping to dense woodlands below. French doors opening up to unleveled land? That says retaining wall or better yet: deck! By creating a deck off the house, the land could continue to fall away without disrupting the drainage. On the other hand, our deck idea would be at grade on one end but cantilevered 6’ off the ground over the land on the other corner. Now this is an opportunity. 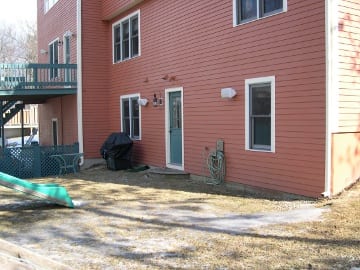 Changes to the house would expand outdoor access and suggested a lower deck. 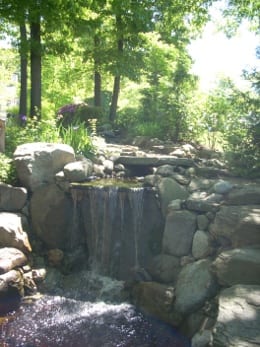 The elevated deck created an overlook. It sat above the land below. This is where the water feature would fit in. Working with the sloping grade, a river stream was introduced to run along the house and ultimately drop water, via a waterfall (buffer that noisy traffic), into a pond. 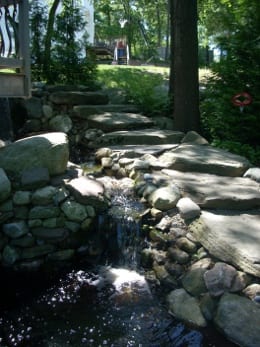 The deck would sit alongside a riverbed and above the pond, soothed by the sounds of running water. To fully extend the deck over the pond, it became a two-tiered design. The top tier was to be a transition area with a smaller, more intimate sitting nook along the stream. The deck would then step down to a much larger area for outdoor dining and entertaining. A grill was built in and banquet seating was created in the far corner to maximize space and get guests to sit safely at the deck’s edge where they could hear and see the waterfall and pond below. 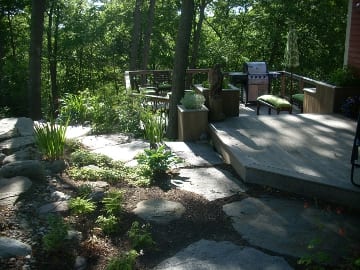 The sloping wooded topography along the East side of this home allowed the client to have two of her three wishes. She now had a water feature to combat the sound of traffic, and she had ample, outdoor dining and entertaining. The proposed deck feels like a tree house. There is water and woods below while you site comfortably among birds and branches up above. 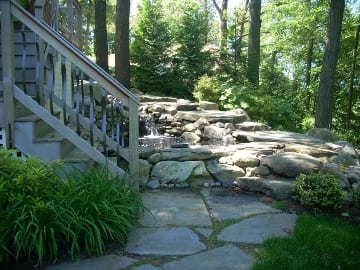 The final wish for this site was for level play space. It was clear that a swing set was not going to fit or look good on a tiny sliver of grass up close to the back of the house. With only 12’ of level yard, there were doubts it could be done.

Looking over the land and reviewing a survey done of the site, there was an indication that the land leveled out at the bottom of the slope with in the woodlands. It was a long shot, but what if this lower and more level area could be opened up to accommodate a swing set and trampoline? The children would embark on the ultimate adventure down the hill to where they had their own woodland retreat. 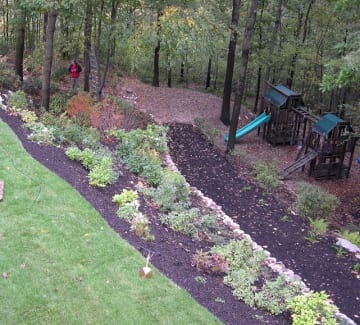 Through careful tree pruning and selected removals, a switchback trail was created through the woods. It wound its way through mature oaks and pines to a level area below. Not only were the swing set and trampoline situated here, but also a hammock was hung from nearby trees and surrounded by blueberry bushes. The woodland path with a pruned canopy invited more sunlight in to hit the forest floor. Woodland groundcovers, shrubs, and perennials were added to enhance this lovely entrance. Yellow wood, ferns, Solomon’s Seal and foamflower edge the trail while viburnum, winterberry, red twig dogwood, and sheep laurel provide a diverse woodland understory.

This project exemplifies ecological landscape design that celebrates a site’s character. My client bought the property because she loves the woodlands. Happily she did not have to give them up or alter her land dramatically in order to achieve her goals. Her family is now able to enjoy outdoor entertaining while elevated amongst the trees. They hear flowing and falling water as opposed to highway traffic. Finally, the children have a woodland wonderland to call home and where they have play structures and edible understory plantings.

Lauren Lautner has been practicing Landscape Design in the Boston area since 1990. She earned a BS in natural resources management from the University of Vermont and an MA in Landscape Design from the Conway School. Lauren has run For Seasons Ecological Landscape Design since 1996. For Seasons has enjoyed large and small residential clients along with Towns, schools, parks, college campus work and condo development projects. Currently Lauren lives in Sonoma County CA where she will spend the winter months. She returns to Marblehead for summers where she continues to run For Seasons and may be reached at llautner@msn.com.