By ecopro on March 15, 2013 in Soil Health, Stormwater Management

From the cab of even a small 6-ton diesel excavator, every site should look ecologically sensitive. These machines are designed to make a large difference in a short amount of time, so when it comes to changing or creating a landscape, every move counts.

Whether I’m just moving a machine on site across a lawn, or digging six feet down in a crater that will eventually fill with water and frogs, I constantly need to pay attention and plan ahead.

Recently, I started a small-scale land stewardship business called On Contour, specializing in drainage and water features, trails and access, and hardscape site preparation. Most of my clients tend towards being pretty ecologically sensitive themselves, and because of that my projects tend to be small-scale specialty projects that require a lot of attentiveness to the collateral impacts my work will have on the site.

If you’ve worked in the environmental or landscaping fields for any amount of time, I imagine you are familiar with most of the basic ecological site considerations like wetland buffers, silt fences, and setbacks for sensitive trees or plantings. In addition to these important concerns, there are more nuanced site considerations that anyone working with disrupting the soil would encounter, and there are some concepts and techniques I like to use to address them.

As you well may know, there is much more going on underground than just “dirt.” The stratification of soil particle size, chemical composition, organic layers, air, water, microbes, fungus, roots, all play into what makes up the status quo on the surface. Any disturbance on the surface or under the surface is going to affect one or more of those factors and change the status quo. As someone who is necessarily intending to create a disturbance, it’s important to me that I leave a project in a state that will allow the surface to return to that status quo rather quickly. By carefully assessing all modes of disturbance my work will have on the land, I ensure that conditions on the surface don’t degrade either immediately or even years after the work is completed.

As Aldo Leopold said, “To keep every cog and wheel is the first precaution of intelligent tinkering.” So what I like to do whenever possible when I have to perform any excavation is to separate at least three different layers in the soil, as determined by descending percentage of organic matter: the sod/organic layer, topsoil (loam), and the subsoil. Then when I’m either refilling that hole, or using the fill in other locations I can try to match the layer that it came from originally with the new layer the fill will create. 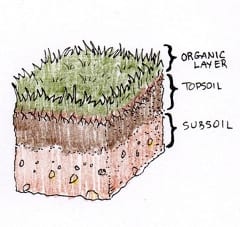 Separating the soil by layer was a useful strategy recently when I was prepping a well site located on a hillside. The client was extremely sensitive to preserving topsoil – which up in the high glacially scoured hill towns of western Massachusetts is not a bad idea! The first thing I did was to scrape off all the sod from the entire area that was going to be affected and stockpiled it where it was out of the way, but where I could pull it back to cover some of the slope when I was done. Then I scraped back the topsoil (all 10 inches of it!) and stockpiled it mostly downhill, just in front of the sod.

I excavated the subsoil just enough so that I had a level surface of undisturbed subsoil as a base for additional subsoil that I trucked in from another project nearby. Using this already disturbed subsoil, I built up to the grade that I needed and compacted gently with just the weight of the machine, one 6-8 inch layer at a time. By bringing in already disturbed earth as fill, instead of cutting into the hillside above for fill, I was able to preserve the integrity of most of the existing subsoil at this site.

The final steps were to pull the stockpiled topsoil back on top of the newly graded subsoil, then to spread out the chunks of sod on the up and down slopes to slow down water and prevent erosion. While the area that was ultimately disturbed was relatively large for the width of the level space that was needed, the slopes are much less extreme on the up and downhill side, so are less prone to erosion and will visually blend into the landscape better once re-vegetated.

At this stage of my business I’ve found that renting rather than owning equipment better suits the work that I do. I can custom order a machine that is just the right size and makes the most sense for the task at hand. When building an access, for example, it’s nearly impossible to make it narrower than the width of the machine. And, there’s no need to make a ten-foot-wide access when a six-foot access will suffice, especially when traveling through sensitive sites.

By developing a narrower access, I avoid unnecessary disturbance of the organic root and rhizome filled top layer of a site and over-compaction of the topsoil. Larger tracked machines, although their weight is dispersed through the wide tracks, can still wreak havoc on that organic layer – chopping it to pieces and displacing it when the vehicle turns, especially with steel tracks. Smaller, lighter, rubber tracked machines, if operated carefully, can cause much less unnecessary disturbance in that top layer. Wheeled vehicles create very little disturbance on the top layer, but they concentrate all the weight on the four tires, rather than spreading the weight evenly like tracks do, causing greater compaction or rutting of the topsoil even with the lighter machine.

At the hillside well project described above, I had to get over 50 yards of fill down 200 feet to the well site. I did not want to use a dump truck because there was 15-20% slope in places and it was damp. A large truck would have easily rutted the surface, especially on the return trip up hill. I also didn’t want to use a tracked loader which would require me to make over 100 trips through a field. The result would have been a compacted trail down to the site even with a lighter machine and rubber tracks. So I opted for a small, wheeled, front-end loader with a larger bucket with which I had to make only about 30 trips. This loader had much wider tires than any dump truck, so rutting was not an issue and turning caused zero disturbance because of the vehicle’s articulated steering. The wheeled loader could travel a great deal faster than a tracked loader, so I could afford to take multiple routes to and from the site which diffused the compaction even more, rather than traveling the shortest distance to the site every trip.

When it comes to ecological site considerations and using heavy equipment, it’s most often the access to the site that has the potential to cause the most unwanted disturbance. A great example of that issue can be seen in forestry. It is usually the logging roads and access points that are subject to severe erosion, introduction of exotic species, compaction, and long-term degradation, not the actual felling of the trees. So when choosing equipment and creating your digging plan, think as much if not more about the impact your access will have on the local ecology, as you would about the work at the actual site.

The Dirt Truth Part 2 shares ideas about managing water on site and making choices that lead to a quick and stable site recovery after the job is complete. 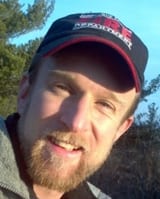 With a graduate degree in Geography from UMass Amherst, over 10 years working in natural lands property management, and extensive experience as naturalist, teacher, and an artist, Walker Korby brings a unique perspective to connecting with, and shaping the land on which we live. With a passion towards building resilience into our landscapes, his skill sets run the gamut of prescribed fire management to pond construction. Walker lives in Montague, MA, and operates On Contour – Integrated stewardship services for the ecologically minded landowner. He can be reached at 413-367-7172 or at walker@oncontour.com