By Maureen Sundberg on February 15, 2019 in Stormwater Management

As (sub)urban growth continues to consume undeveloped land, stormwater runoff from impervious surfaces grows in importance as a contributor to water resources degradation. Impervious surface creates surface runoff at the expense of infiltration and evapotranspiration. These increased stormwater flows and volumes can erode streams and rivers causing significant damage to property, the stream, and aquatic life. The runoff can contain elevated concentrations of many pollutants of concern, including sediment, nutrients (nitrogen and phosphorus), heavy metals (copper, lead, zinc), hydrocarbons, pesticides, microorganisms, salt, and others. These chemicals are washed from buildings, lawns, roadways, and vehicles during rain events. Even a few percent urbanization in a watershed can lead to significant stream impacts.

Bioretention has been promoted as a “low impact” stormwater management practice to mitigate impacts of impervious surfaces. Bioretention is a nature-based stormwater control measure. It consists of a media layer with planted vegetation. The media is commonly an engineered mix of sand, topsoil, and organic matter, 3-4 ft deep. A ponding area is designed to pool 6 to 12 inches of water above the media. A perforated pipe underdrain may be placed under the media to drain the cells and prevent flooding. Various types of vegetation are planted. Fundamental, applied, and monitoring research has been completed demonstrating the performance of bioretention and impact of design variables. 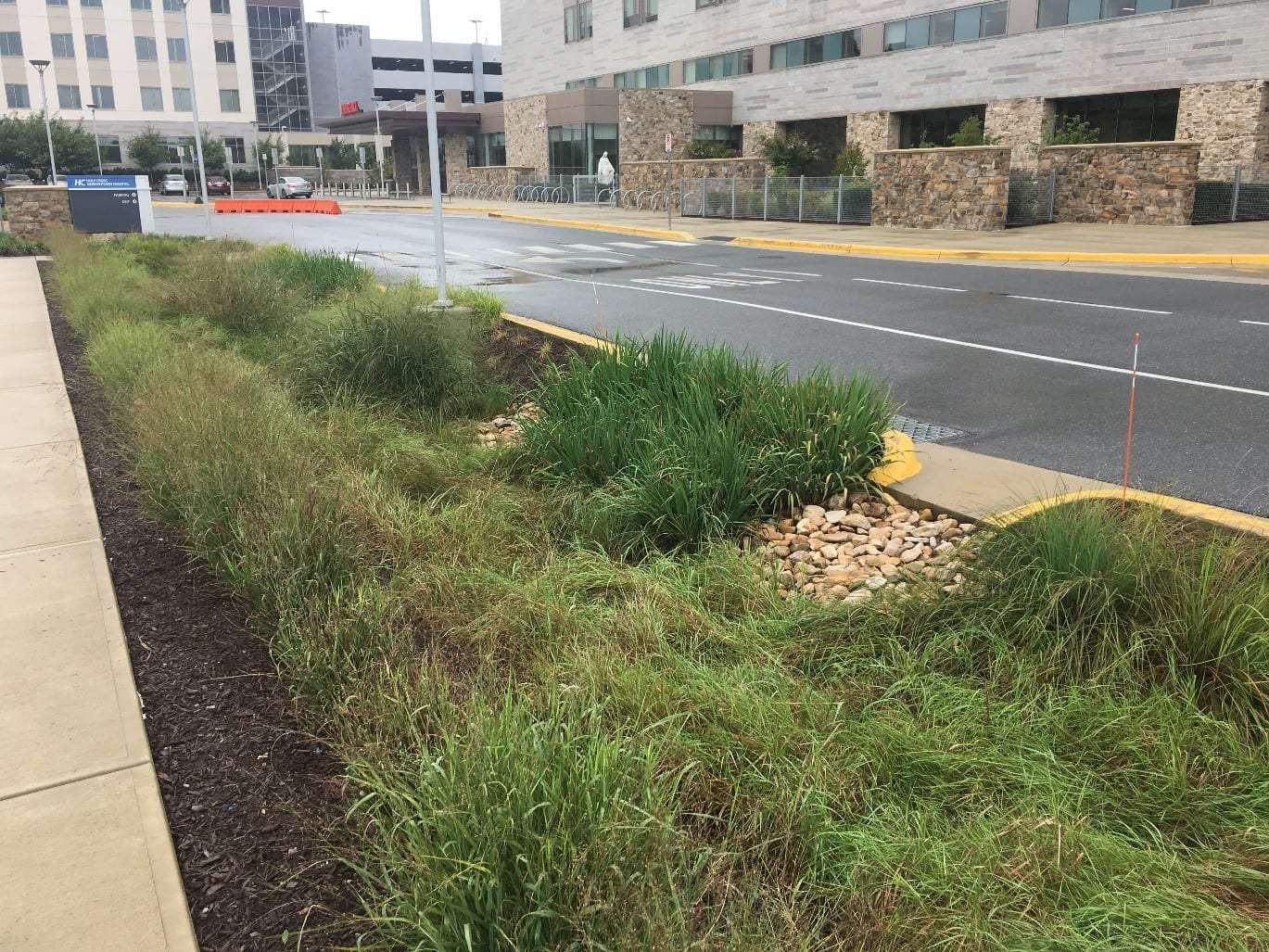 Bioretention cell at a hospital in Maryland

Runoff is directed into the bioretention facility from impervious areas. Bioretention will moderate flow rates and reduce discharge runoff volumes, concurrently reducing pollutant mass discharge. Part of the inflow becomes groundwater recharge and some fraction is evapotranspired. The size of the facility will determine the runoff volume managed, as water is stored in soil pores and the shallow storage at the facility surface. Generally, bioretention cells are sized to match a specific impervious area, such as to hold, infiltrate, and treat one inch of runoff from the impervious area drainage.

Understanding the unit treatment processes in bioretention allows characterization of water quality performance and modifications to bioretention designs. Particulate matter and sediment (and the pollutants attached to sediment) can be very effectively removed and treated via filtration mechanisms, collecting the sediment at the media surface. Removal of sediment is not highly dependent on the media characteristics; all do an excellent job. Sediment may accumulate at bioretention entrances and may need to be periodically removed.

Various media adsorption processes play a large role in governing bioretention performance. Dissolved heavy metals and hydrocarbons are adsorbed strongly on organic and inorganic fractions of the media and concentrations of these pollutants in bioretention-treated waters is generally low. Accumulations of these pollutants will occur at the surface (and near inlets) of these facilities, facilitating maintenance and cleanup. Some evidence exists indicating that captured petroleum hydrocarbons may be biodegraded over time in bioretention facilities. 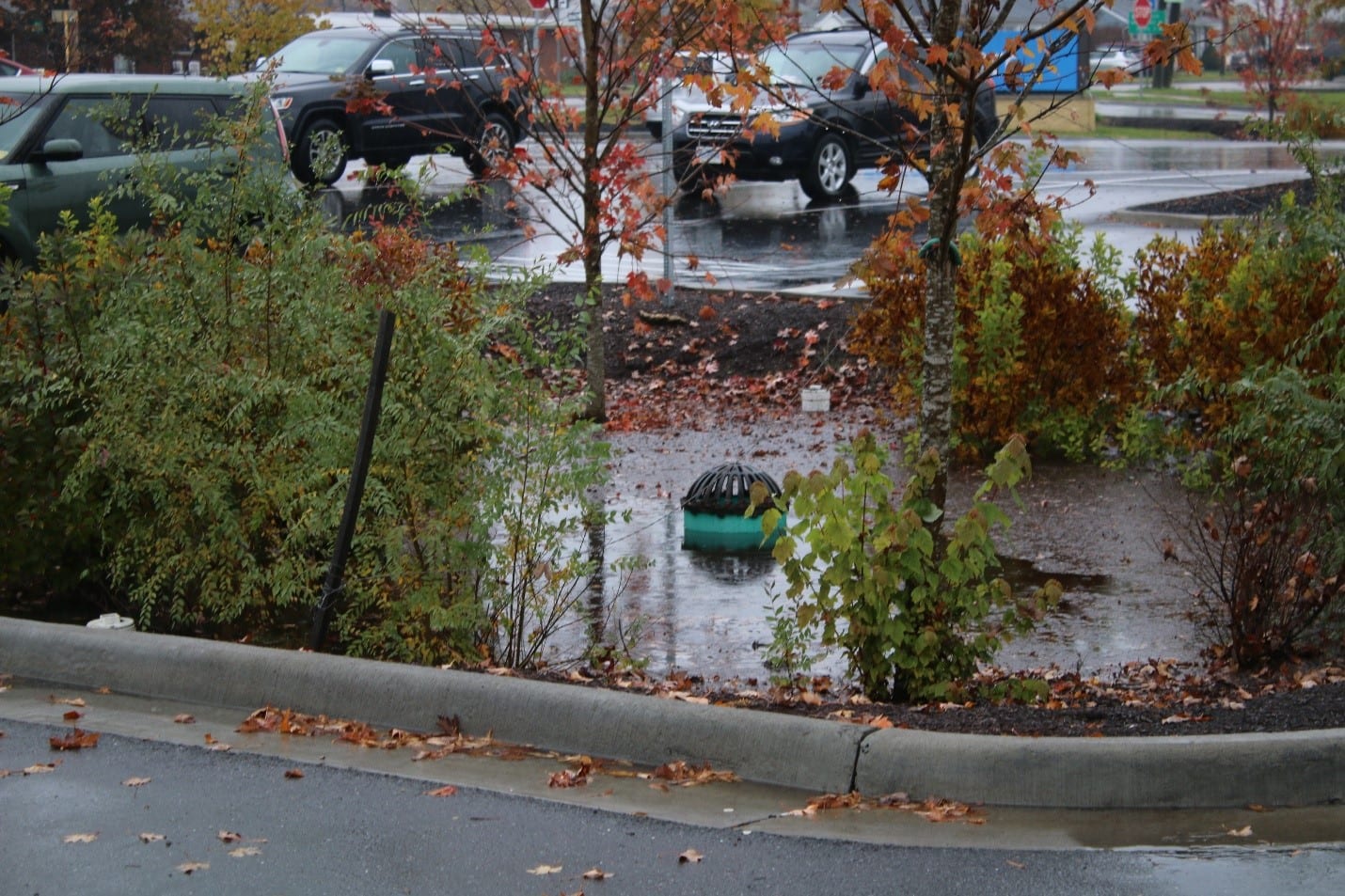 Bioretention cell at a large retail store in Virginia

For phosphorus, enhancing removal entails increasing the level of amorphous aluminum and iron in the media. Amorphous aluminum and iron minerals are known to strongly adsorb phosphorus within a neutral pH range. Various media specifications have been examined, from using high-iron soil, to adding iron and aluminum materials, such as scrap iron and residuals from aluminum and iron coagulation in drinking water treatment facilities. Coating bioretention media with an aluminum (hydr)oxide can increase phosphorus removal capacity beyond those found with addition of waste materials. Enhanced removal of inorganic and organic phosphorus species has been demonstrated in lab studies, with limited field confirmation.

Nitrate removal in stormwater control measures is complex and not fully understood. Denitrification can be promoted by adding an internal water storage (IWS) zone to a bioretention cell. This is done by raising the discharge point of the cell underdrain by about 1 ft, allowing subsurface storage of this depth of water between rainfall events.  This storage water will become anoxic and denitrification can proceed. Typically, a carbon source such as wood chips is added to the IWS layer to act as the electron donor for denitrification. While denitrification can occur between storm events, it appears to be too slow to be effective during the time of the storm event.

Vegetation plays multiple roles in bioretention performance, including preventing clogging, nutrient uptake and processing, and improving aesthetics. Active vegetation can prevent clogging by keeping media pores open as sediments are transported into the bioretention cell and filtered by the surface media. Vegetation will assist with water removal via evapotranspiration and nutrient removal via plant uptake. These processes are most active during the growing season. From a sustainability perspective, harvesting some fraction of the vegetation allows removal of the nutrients accumulated in the vegetation and prevents them from being reintroduced to the media during annual die off.

Research on bioretention continues, increasing understanding of scientific and engineering principles, but also on evaluating ecosystem services and social impacts of engineered greenspace in the urban environment.

Dr. Allen P. Davis is Professor and Charles A. Irish Sr. Chair in Civil Engineering in the Department of Civil and Environmental Engineering at the University of Maryland. He earned his BS, MCE and PhD degrees all from the University of Delaware. For over two decades, Dr. Davis has been investigating sources and treatment of pollutants in urban stormwater runoff with a focus on nature-based practices, particularly bioretention. In 2010 he was awarded the A. James Clark School of Engineering Faculty Outstanding Research Award recognizing exceptionally influential research accomplishments related to urban stormwater quality, its management, and the concept of Low Impact Development. He is author or co-author of over 120 peer-reviewed journal articles and a text on Stormwater Management for Smart Growth. He is currently Editor-in-Chief of the ASCE Journal of Sustainable Water in the Built Environment.