By Maureen Sundberg on January 15, 2019 in Climate Change, Trees

by Ian A. Smith and Lucy R. Hutyra

Constraining the global average temperature rise to below the targeted 2°C (3.6°F) will require both a reduction in greenhouse gas emission rates and natural climate solutions through land stewardship practices that remove greenhouse gases from the atmosphere (1). Forest management is at the heart of many natural climate solutions as forests currently represent a large carbon (C) sink, offsetting nearly one-third of anthropogenic C emissions (2). Land management practices can be optimized to maximize the ability of forests and green space to act as a natural climate solution. However, in our current era of multifaceted global change, anthropogenic land-use and land-cover conversions are continuously modifying the ability of the world’s vegetation to mitigate climate change via the uptake and storage of atmospheric CO2. 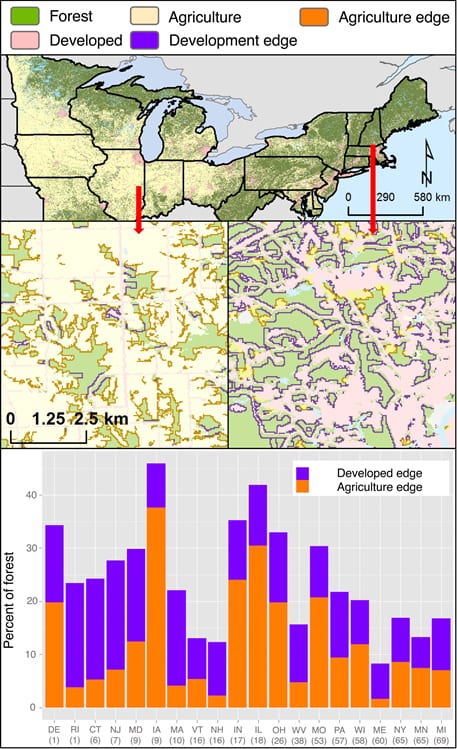 Forests worldwide are increasingly being fragmented into smaller patches; at present, as much as 20% of global forests are within 100 m of a non-forest edge and 70% are within 1 km of a non-forest edge (3). Across the northeastern US, 23% of the current forest area is within 30 m of a developed or agricultural edge, with strong regional gradients in the dominant land-cover type adjacent to forests (Figure 1). The consequences of forest fragmentation on biodiversity have been well described, but the impacts of fragmentation and edge effects on the C cycle are just beginning to receive attention. Research has demonstrated that forests near edges have distinct growing conditions, but the magnitude of these differences – and even whether productivity is enhanced or diminished as a function of proximity to an edge – appears to vary across biomes. There is therefore an urgent need to understand how pervasive forest fragmentation is affecting the uptake and release of C by vegetation.

Fragmentation creates a mosaic of forested and non-forested land, altering the flow of energy and nutrients across the landscape. Changes in the forest edge environment can create both favorable and adverse conditions for plant growth. Light, air temperature, soil temperature, and wind increase between the forest interior and edge, whereas soil moisture and relative humidity decline near the edge. Edges experience a larger fire risk than the forest interior through relatively dry conditions and greater exposure to potential human ignition sources, but fragmentation also creates fuel discontinuities that can inhibit wildfire spread. In addition, forest edges can be predisposed to pest infestations through heightened invasion probability. Nitrogen is a limiting nutrient for vegetative productivity, but atmospheric nitrogen deposition and availability can be elevated at the forest edge due to a combination of inputs from nearby vehicle exhaust, fertilizer applications, and increases in vegetation density. The balance between these ecological risks and opportunities for vegetation growth near the forest edge determines whether C uptake and storage is enhanced or diminished in the forest edge zone.

Geographic differences in the balance of risks and opportunities account for different impacts of edges on C cycling across forest types. For example, in low-latitude forests near the equator, elevated air temperature near an edge might reduce forest productivity as the trees at the edge become more susceptible to heat stress and drought.  In contrast, in forests at mid-high latitudes, where vegetation growth is often limited by temperature, higher air temperatures at the edge can stimulate forest productivity by bringing trees closer to their optimal temperatures for a larger proportion of the growing season. Growth and mortality near the forest edge are more sensitive to environmental stress and extremes than in the forest interior. Whereas growth at the forest edge can be enhanced by higher light and nutrient availability, the risk of mortality is also elevated due to increases in fire, heat, drought, and/or wind. Forest edge C dynamics may be predictable if we consider how trade-offs in local growing conditions couple with spatially varying limits of vegetation growth. 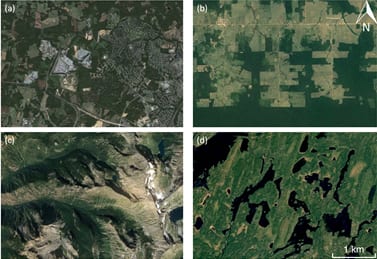 Growth is limited by light, temperature, water, or some combination of the three, depending on geography. Furthermore, the drivers of fragmentation may vary across forest types In many temperature-limited systems (e.g. boreal forests), much of the fragmentation results from natural features on the landscape, such as lakes and wildfires, whereas in light-limited systems (e.g. tropical forests), much of the fragmentation is due to deforestation and land-use change (Figure 2). In the temperate region, the prevailing driver of fragmentation is the conversion of forest to development and agriculture. Consequently, differences in the impacts of fragmentation across these biomes depend on differences in both the factors limiting growth and the disturbance agent.

With world populations projected to continue increasing, human settlements and agricultural lands will almost certainly continue to expand into currently forested areas, which will increase the proportion of the world’s forests experiencing edge conditions. Projected increases in temperatures and more frequent heat waves and drought could act synergistically with forest fragmentation to put further pressure on forests by intensifying edge-to-interior gradients. To maximize the potential of forests to operate as a natural climate solution, it is critical to better understand how forest fragmentation impacts the strength of the forest carbon sink across space and time, capturing a more complete picture of C cycling across heterogeneous landscapes.

This article is a condensed version of Smith et al. (2018) and these materials are used with permission from Frontiers in Ecology and Environment. The original article may be found here.

Ian A. Smith is a research fellow in the department of Earth & Environment at Boston University. He received his BA in Environmental Science from Boston University in 2017. Ian is interested in researching anthropogenic perturbations to the carbon cycle with a focus on biogenic carbon fluxes in cities and across fragmented landscapes.

Lucy R Hutyra is an Associate Professor in the Department of Earth & Environment at Boston University. She received her PhD in Earth and Planetary Sciences in 2007 from Harvard University for her thesis “Carbon and Water Exchange in Amazonian Rain Forests.” Professor Hutyra’s current research interests center on characterization of the urban carbon cycle, including quantifying the effects of urbanization on vegetation structure and productivity, developing urban greenhouse gas monitoring systems, and refining fossil fuel emissions estimates.