By Maureen Sundberg on February 15, 2018 in Landscape Design

Increasingly, I am intrigued by the value of linking ecology and ecological processes with art and music in the design of landscapes that might be considered “ecological art.” The products of ecological art have the potential to be, simultaneously: 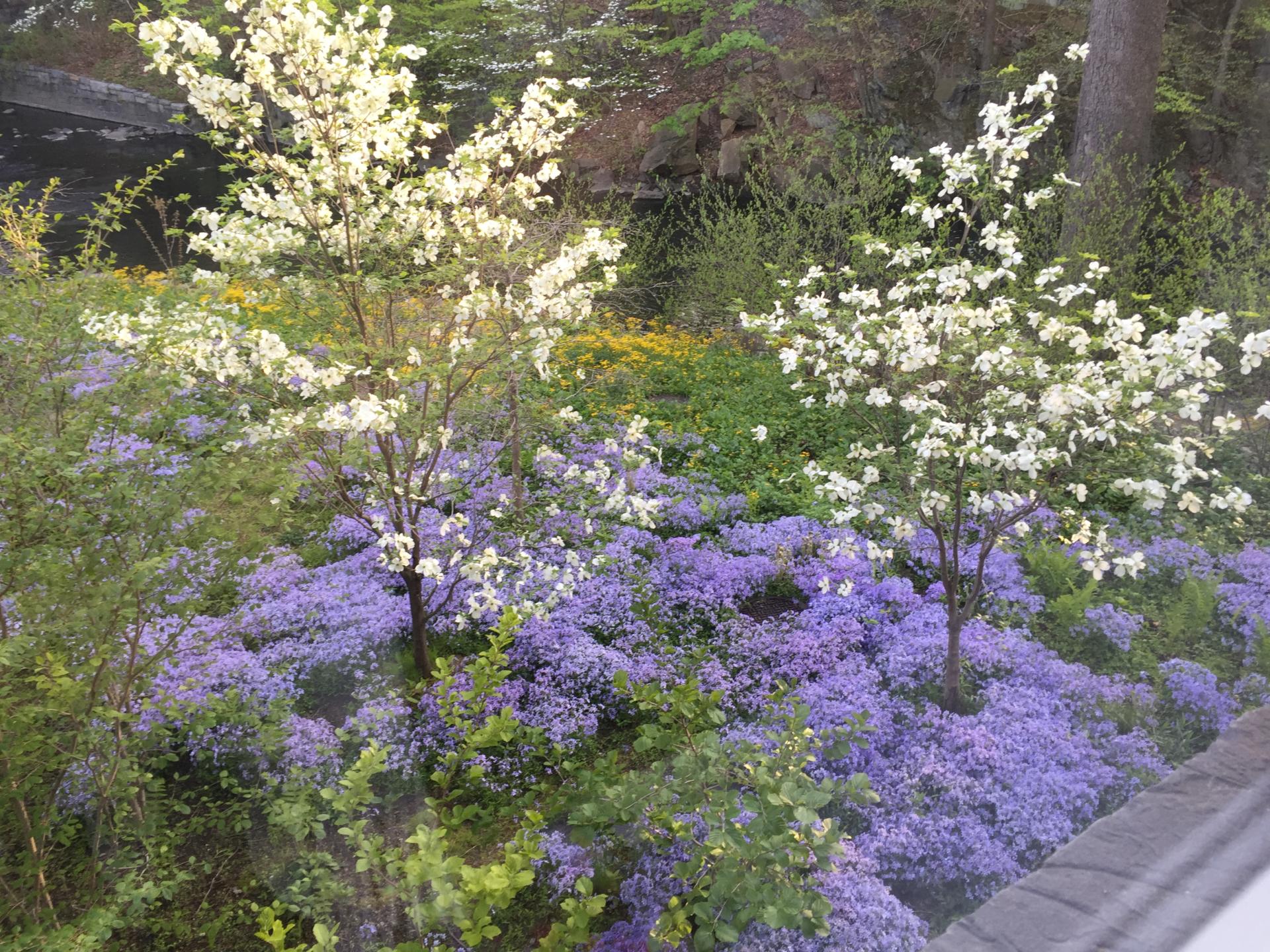 A drift of woodland phlox (Phlox divaricata) with flowering dogwood (Cornus florida) at The Old Stone Mill in the New York Botanical Garden.

Ecological Soundness grows out of the selection of appropriate plant species and placing them in the micro-environment where they will thrive without the importation of resources such as irrigation water and chemical fertilizers. Logically, the plants that are incorporated in a designed landscape would be native to the region and adapted to the micro-environment in which they are placed. They in turn serve a variety of functions, ranging from controlling erosion to providing habitat for birds, butterflies, bumblebees and other pollinators that evolved with the native vegetation over the centuries.

Experiential Richness emerges from the presence of a diversity of plant species and associated fauna, in compositions that are rich in color, texture and movement. Environmental psychologists Rachel and Steven Kaplan of the University of Michigan, through their research on the response of people to the environment, have identified four characteristics of landscapes that people find engaging and attractive. These are (1) mystery, (2) complexity, (3) coherence, and (4) legibility. 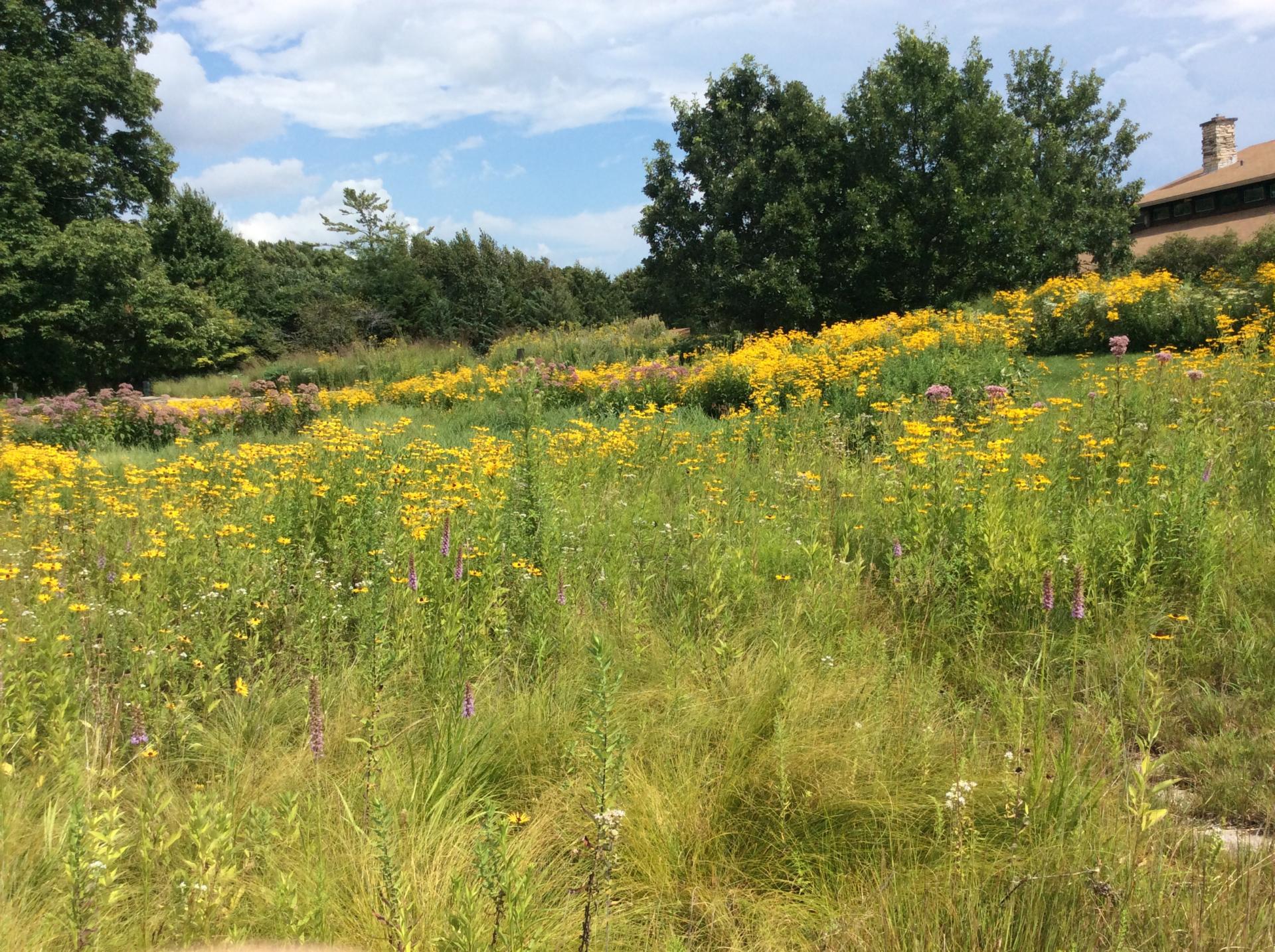 Complexity and coherence in the “water continuum” Garden at the University of Wisconsin Arboretum Visitor Center.

Mystery is derived from spatial form which unfolds sequentially as one moves through the landscape, revealing landscape spaces. Mystery implies that part of the scene is hidden, thus motivating people to want to see what is “around the bend.”

Complexity relates to the biotic diversity in a landscape and the aesthetic characteristics which come with this diversity – e.g., colors, textures, and movement.

Coherence results from the fact that the distribution of species exhibits perceptible pattern. The tendency of many species being aggregated to a degree, leads to the occurrence of directional “drifts” of color and texture.

Legibility in the Kaplans’ work, relates to people’s ability to “read” how they will move through the landscape, not feeling claustrophobic or disoriented. Extending the concept of legibility farther, we can use the plant species in a specific place as an indicator of the environment: for example, prickly pear cactus in a dry, sandy environment versus cinnamon ferns in a moist one.

We are increasingly surrounded by generic landscapes, whether it is the sprawling big box stores repeated over and over in suburban environments, or landscapes that are increasingly alike, with the same, limited number of species replacing the natural diversity that may have once occurred there. In the words of Gertrude Stein, referring to Oakland, California, where she spent part of her life, “There is no THERE there.” We can reverse the trend toward “placelessness” by incorporating an array of locally native species which provide cues and clues as to where we are. 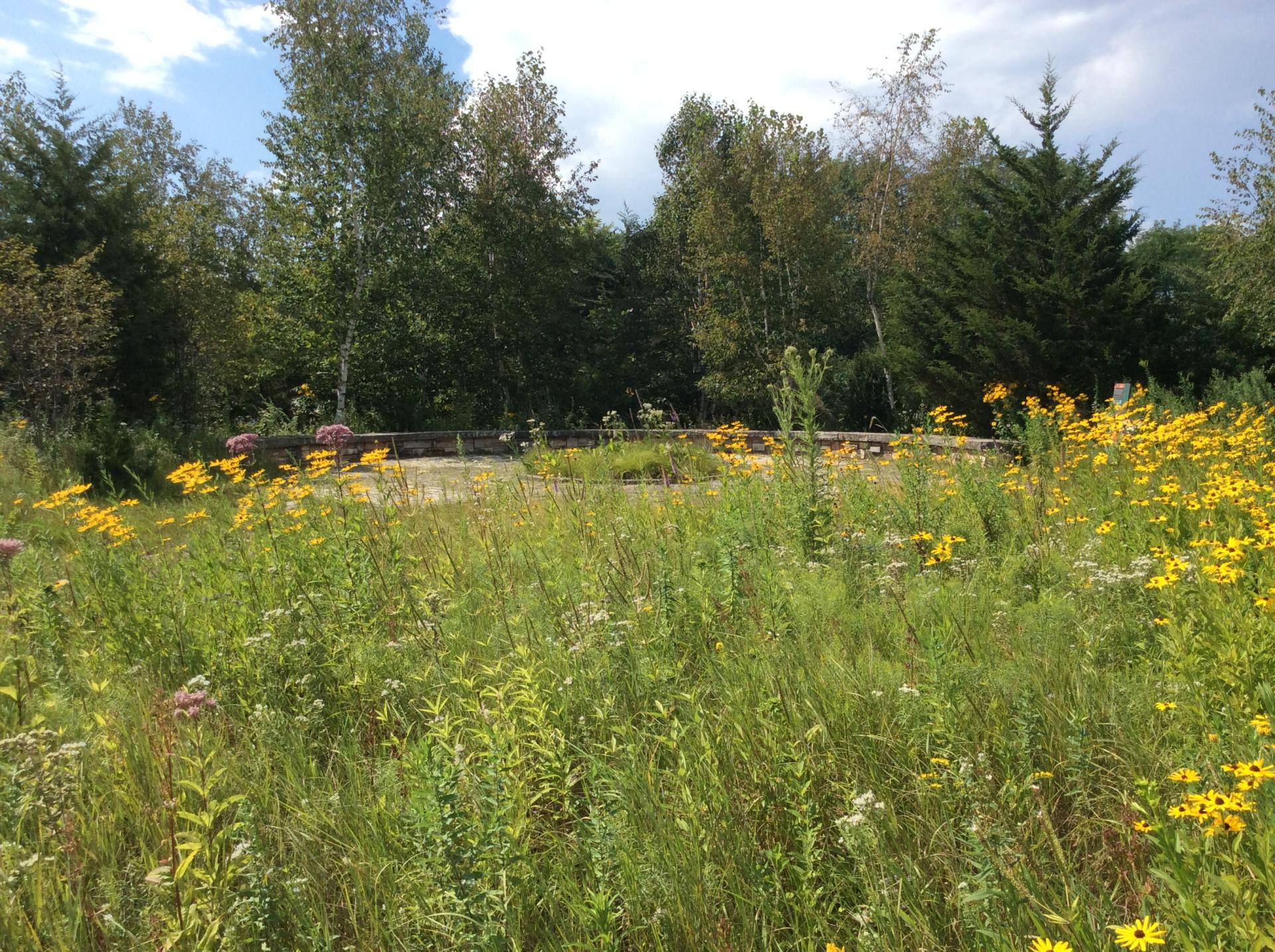 Natural diversity in a prairie planting at the University of Wisconsin Native Plant Garden, with a backdrop of red cedar (Juniperus virginiana) and paper birch (Betula papyrifera). 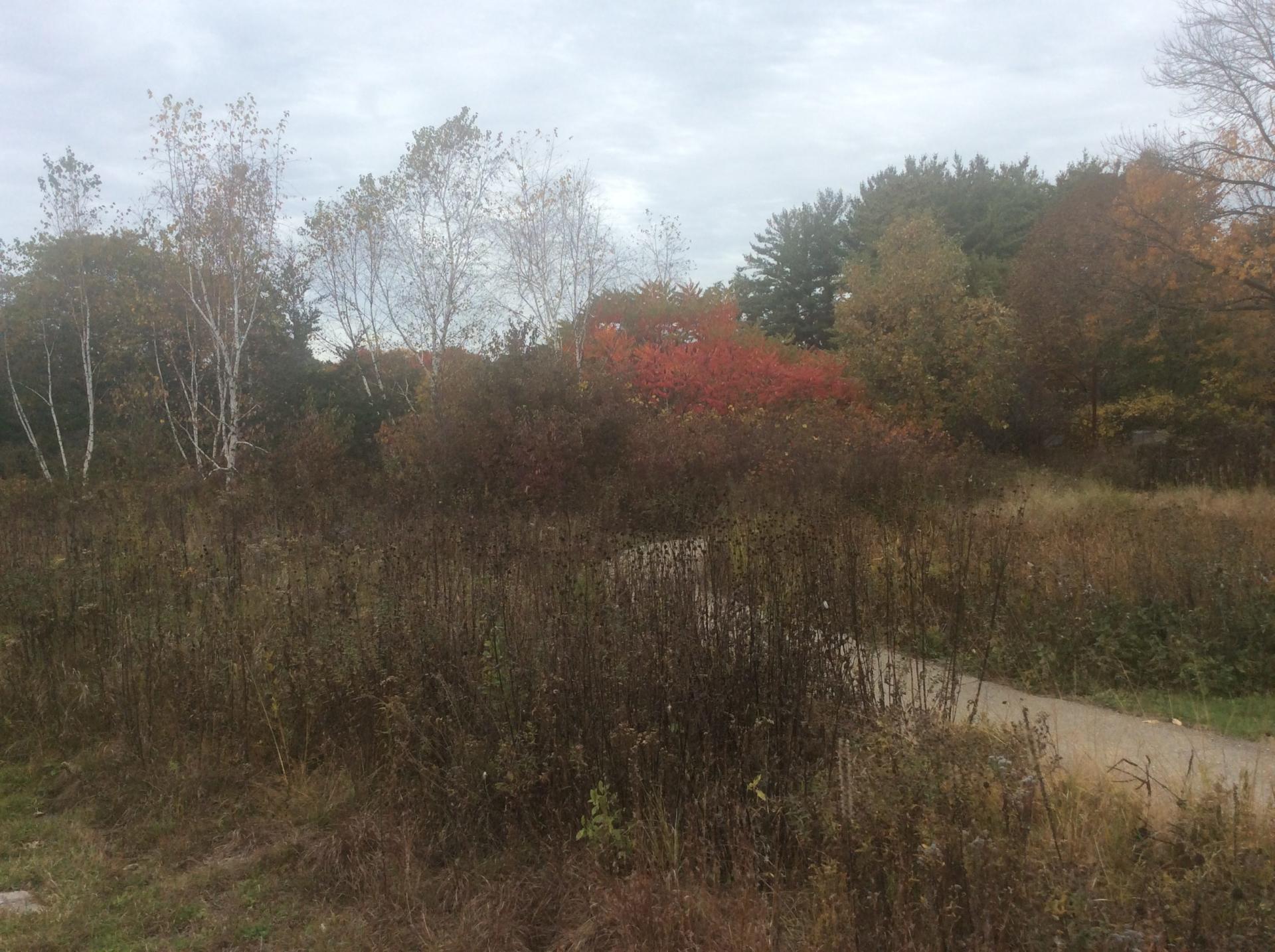 Two other characteristics of the environment that provide a dynamic quality are LIGHT and MOVEMENT. The color of natural light changes as a day progresses, and the physical movement of the plants (and the fauna that are attracted to them bring life to them.) I never tire of seeing the wave-like motion of tall grasses in the landscape, or of seeing (and sometimes hearing) birds, butterflies, and bumblebees moving through a landscape. The direction of light changes throughout a day and a year as well. We can place plants in a designed landscape where they will, during some part of the day, be backlit, literally making them “glow,” or as landscape architect A. E. Bye expressed it in a 1967 essay in Landscape Architecture Magazine, they exhibit “luminosity.” 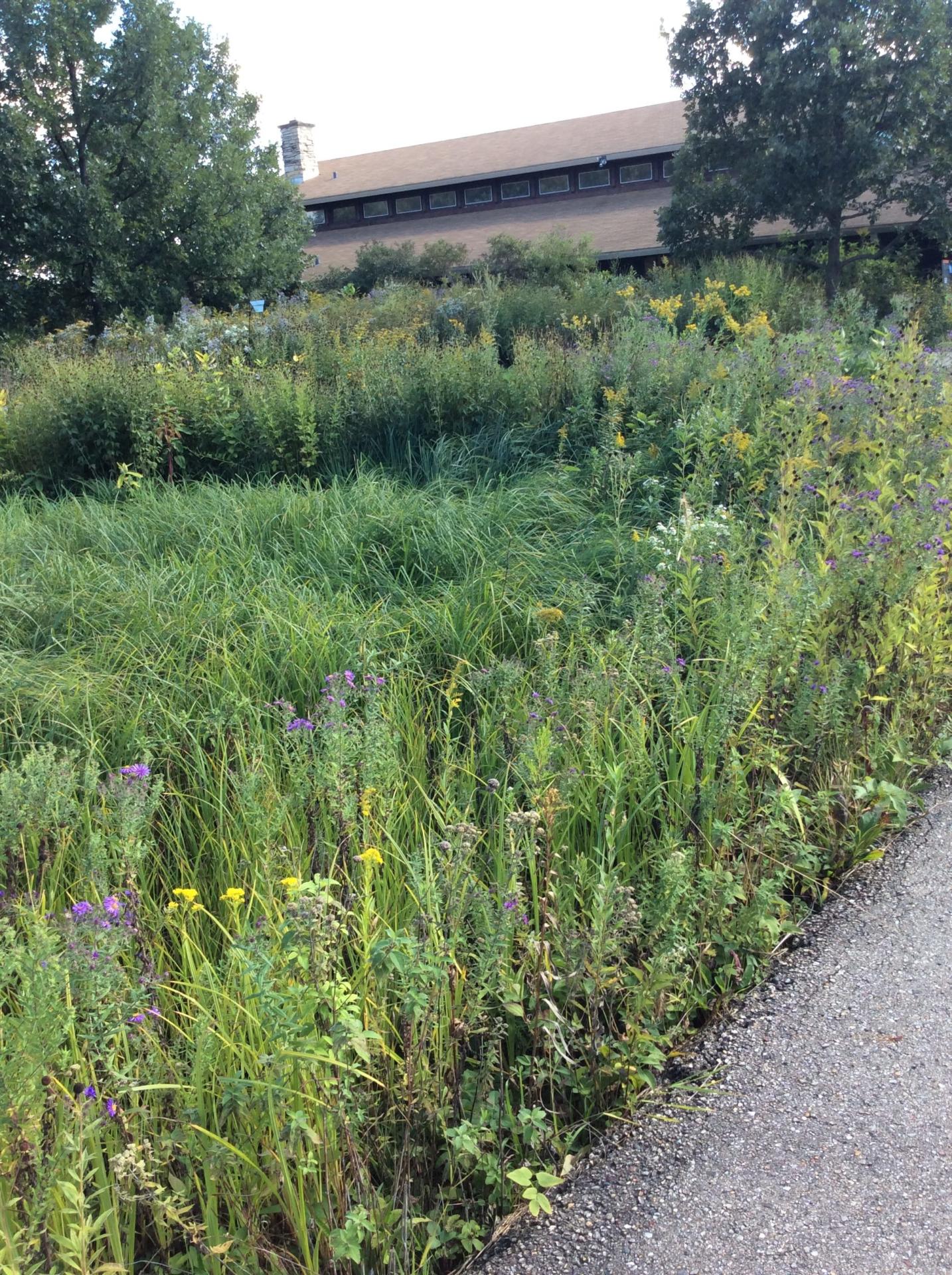 Finally, I want to mention the potential to use music as inspiration of landscapes that might be considered “ecological art.” Jens Jensen wrote poetically about parallels between music and landscape. He, for example, wrote of sumacs and maples in the fall, catching the red light at sundown, and called it a “Tannhauser” landscape. He wrote about a young designer in his office struggling with the design of a stream and small waterfall. Jensen told him to listen to Mendelsohn’s “Spring Song” as inspiration, and the design “came” to the young designer.

Oliver Sacks, neurologist, writes about the connection between music and the brain in his book, Musicophilia. I have observed students (and myself) designing under the influence of music for at least a couple of decades now. At the very least, music can help a designer overcome “designer’s block” and create forms and patterns which become an early design concept. At its best, music can lead to masterful compositions of mass and space, light and shadow, color, texture and movement that might never have been discovered through a totally rational “functional” approach to design.

I look forward to exploring these ideas at the ELA Conference in Amherst, March 7 and 8. And we will, together, move toward creating landscape designs that are truly “ecological art.”

His landscape design work includes the Lady Bird Johnson Wildflower Center in Austin, TX; the Native Plant Garden at the University of Wisconsin-Madison Arboretum; eastern meadows at Storm King Art Center in Mountainville, NY; the Old Stone Mill landscape at New York Botanical Garden; the Native Flora Garden Extension at Brooklyn Botanic Garden. In 2016, he and his associate, Nancy Aten, designed a 29-acre native landscape restoration at Stella Niagara Preserve along the Niagara River in Lewiston, NY, for the Western New York Land Conservancy. They are currently working on Findlay Park landscape restoration along the Niagara River Gorge, also for the WNYLC.

Mention of products is not intended to constitute endorsement.Opinions expressed in this newsletter article do not necessarily represent those of ELA’s directors, staff, or members.

Exploring Rogue Territories
Book Review: Whitewash – The Story of a Weed Killer, Cancer, and the Corruption of Science