by Lynden B. Miller

One of the most important elements in successful public urban green space is PLANTS. Over the last 30 years in New York City, we have found exciting reasons to use plants in new ways to improve the lives of city dwellers. We now know that plants have the power to soften and civilize public urban space, even in places once thought to be dangerous. These green oases give pleasure to millions who crave a connection with nature in their lives. 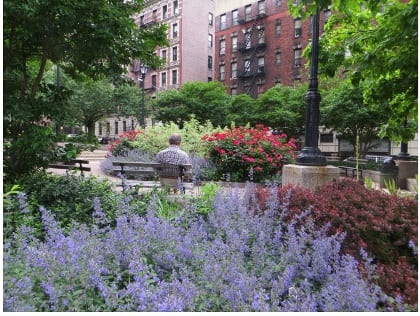 People are always astonished to find something natural and beautiful in the middle of a big city. Whether it is an old garden in Central Park, a community garden in the Bronx, or a spectacular urban flower display, like the ones in Chicago when Mayor Richard Daley was in charge, people simply feel better about themselves and their communities when surrounded by beautiful plants. Since the earliest times, human beings have always needed oases of green escape – a relationship with nature. It is no wonder that in many religions Paradise is envisioned as a garden.

The Essential Role of Parks

Back in 1857 when Frederick Law Olmsted designed Central Park, he knew and wrote about the importance of a beautiful park to the health and well-being of city dwellers, but in the years since that time, his wisdom was gradually forgotten. By 1970, Central Park and the rest of the public spaces in New York City were in terrible condition due to lack of city funds for maintenance. Crime was high, and New York’s morale was very low. In 1980, private citizens formed the Central Park Conservancy, a public-private partnership with the city to restore Central Park’s 840 acres including its overgrown, neglected formal garden: The Conservatory Garden. Due to these restorations, we learned once again about the essential role that well-planted landscapes have to play in city life. Despite predictions to the contrary, people noticed that as the park began to look better, people showed it respect and began to enjoy it. Crime went way down, and civic pride soared. 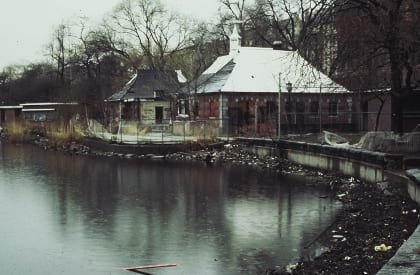 By 1970, Central Park had fallen into a state of neglect, and crime increased as
People no longer cared to visit.

Much of Central Park’s restoration was accomplished with private money, but now it is time for the city government to step up and continue the process in all neighborhoods around the city. Why? Because city improvements with plants in parks, on sidewalks, and on median strips offer huge benefits, both social and economic. Large parks like Bryant Park and Madison Square Park in midtown New York as well as small street oases like the 97th Street Park Avenue Mall raise property values and benefit neighborhoods because they are now filled with beautiful plantings. The Highline with its thousands of plants in lower Manhattan has transformed an ugly area into a destination that attracts millions of visitors each year.  The Rose Kennedy Greenway in Boston, a long series of richly planted parks, has revitalized an area once dominated by a large, ugly highway. And Central Park is now the most-visited of New York’s tourist attractions, boasting more visitors than the Empire State Building or the Statue of Liberty.

Of course, it’s not only tourists who enjoy urban green spaces. In cities, when people leave their offices and find themselves surrounded by life-affirming natural elements—changing seasons, tall trees, wide lawns, flowers, birds, bees, butterflies—something positive happens to them. People respond to beautiful, well-planted surroundings by respecting and protecting these places no matter who they are or where they come from. Strangers enjoy sharing this beauty with one another, saying things like: “Did you see that hummingbird?” or “My grandmother had that plant. Do you know what it is?” Recent studies in the journal Environmental Science & Technology show that proximity to a green area improves people’s mental health. Indeed, it’s obvious to observers that people will go to great lengths to visit or move near a good park. Whenever they are able to, people seek out green areas. 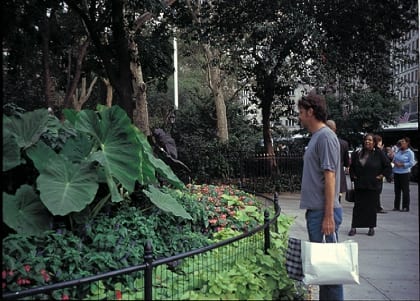 An important key to successful public landscape design, though lacking in many landscape architecture projects, is to think about the people who use the space, i.e. the client – the public. Why do they want to come to this space? What do they want when they are in it? The designer must put himself into the space he is creating and move around in it to see if it really works. An important ingredient for any project is seating, and those seats should be put where people will enjoy them. Many successful public places now have moveable chairs so that the client can determine the most enjoyable location and feel a sense of ownership in the space.

After organizing the hardscape for the people who will use it, the next most important ingredients are soil, plants, and maintenance. The right soil is the foundation for the plants of the site. Once good soil is in place, you should try to locate the best and largest plants available, using a mixture of shrubs and perennials in combinations that produce year-round effect. Good, lush, healthy plants are magnets that attract people, and using large ones right away gives instant gratification and confidence in the space. Once soil and plants are in place, then of course you need the best maintenance available. “Sustainable” is a buzzword these days, and to a large degree, a sustainable public landscape depends on the designer picking the right plants. If the designer specifies the wrong plant (a sun loving plant in deep shade or a thirsty plant in a dry location, for instance) and plants it in bad soil, then you can’t take care of it and it will never be sustainable. 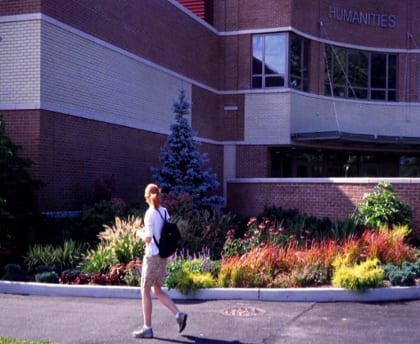 In 2001 in response to the events of 9/11, 10,000 volunteers planted one million daffodils in parks all over New York City in memory of those who died. These cheerful harbingers of spring reminded people that parks are sacred spaces and that nature would help to heal our wounds. Now 13 years later, New Yorkers have planted five million daffodils on streets, in housing projects, and around schools yards as well as in parks. Fifteen other cities have adopted this daffodil planting idea; expanding the idea further could bring pleasure to millions more and beautify even more communities and cities all over the country.

Anyone who loves cities and plants can be part of the effort to green our public spaces, especially urban spaces. City dwellers, city planners, philanthropists, civic activists, public officials, developers, landscape architects, gardeners, horticulturists, and environmentalists—everyone should be aware of the exciting possibilities of planting for people. Making your city more beautiful will bring environmental, social, and economic benefits. You will need energy, determination, and a knowledge of plants. Above all, you must have a belief in the powerful connection between people and nature in order to create successful public spaces. 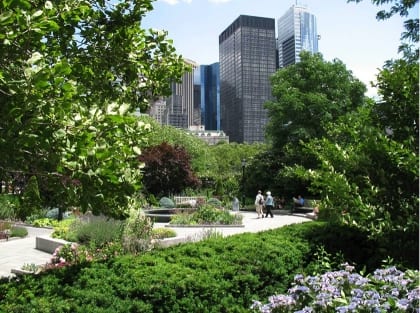 Beautiful places connect people with nature. Wagner Park provides a place to restore the soul in the middle of the city.

Lynden B. Miller is the director of The Conservatory Garden in Central Park and has designed many gardens and parks in the five boroughs of New York. Ms. Miller received the Distinguished Alumnae Award from Smith College in 1999, which described her as one “who uses the beauty and enchantment of public gardens to instill new pride in communities and change the personal and public experience of urban life.” Ms. Miller’s book, Parks, Plants, and People: Beautifying the Urban Landscape won the American Horticultural Society 2010 National Book Award.

Conserving Soil with Grow Bags
Where the Wild Things Are: How to Support Wildlife in the Modern Gardening World