By Penny Lewis on February 17, 2014 in Native Plants, Wildlife Habitats

One of the great reasons to plant native species rather than their non-native counterparts is the support they provide to local wildlife populations. Simply put: If you plant native species–any native species–you will support a greater array of wildlife than if you had planted the same area with non-native species. The basic principle is that wildlife needs food, water, and shelter. However, for those gardeners truly interested in creating a creature-friendly environment, it is possible to do more.

A common landscaping mistake is to focus exclusively on providing food while ignoring water and shelter. Set a birdfeeder in the middle of your lawn and you may see a few birds hanging around it now and again. Take that bird feeder and put it at the edge of the woods, and you will be amazed by how many more visitors it receives. Birds, like many other forms of wildlife, require shelter for both nesting sites and protection from predators. Evergreens work especially well for shelter. Leucothoe fontanesiana is a great choice; its thick cover of arching branches creates small caves within the plant that make great hiding places for low-flying birds and mammals. Leucothoe is also drought, shade, and acid tolerant and thus grows just about anywhere in the New England garden. This is also a great place for armed plants. While the thorns of a Hawthorn may make it a difficult choice for a children’s garden, those same thorns help to protect small birds and mammals from potential predators.

While evergreens make great choices for cover plants, most thickly branched deciduous species can also provide shelter. Physocarpus opulifolius (ninebark), Philadelphus inodorus (mock-orange), or Itea virginica (Virginia sweet spire) are all great choices for providing both shelter for wildlife and aesthetic beauty for humans. Place your sources of water and food near shelter spots and you will greatly increase the amount of visiting wildlife. 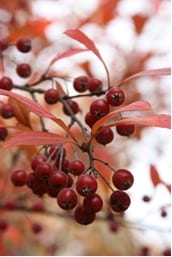 Aronia spp. are an important food source for Hessel’s hairstreak (Mitoura hesselii) after they mature into adult butterflies.

Providing water doesn’t necessarily mean installing a bird bath. Reuse those old broken pots by plugging up their holes, filling them with 1-2 inches of water, and planting a few plants around them. Don’t simply provide water for your wildlife; look at this as an opportunity to create a focal point in the garden. Use a basic water pump to run water over a flat stone and you will be providing water for not only birds but ground dwelling animals such as frogs and snakes as well. Most containers will do fine as long as they are kept clean. When in doubt, run your finger along the bottom of the bird bath. If it feels slimy, it’s time for a scrubbing.

So, should you plant plenty of butterfly bush (Buddleja davidii) in your garden?  For butterflies (or other insects that undergo metamorphosis), it’s important to plant for the initial stages of development as well as the later. We often think that in order to feed our butterflies we need to…feed our butterflies. This is not incorrect but it misses half of the butterfly’s life cycle. During its two weeks as a butterfly, a swallowtail needs nectar plants as a food source. However this is only a part of the story. During the 2-5 weeks before that, in its larval stage, it needs a host plant for food (such as our native Zizia aptera, golden alexander). This is the problem with butterfly bush: it may offer nectar to foraging butterflies, but it cannot act as a host for the earlier stages of development.

For some butterflies, host plants and food plants are the same. The monarch butterfly is one of these, completing its entire life cycle in conjunction with milkweed species (Asclepias spp.). More often than not, however, the progressing stages of development require completely different plant species. Hessel’s hairstreak (Callophrys hesseli), a butterfly of special concern in Massachusetts, lays its eggs on the leaves of Atlantic white cedar (Chamaecyparis thyroides). When the larva pupates and matures into adult butterflies, they cannot feed on cedar and must fly off in search of the flowers of blueberries, chokeberries, and various meadow wildflowers. So what can you do? Adding a few blueberries (Vaccinium spp.) and/or chokeberries (Aronia spp.) to your garden, especially if you live within range of a wetland area, will provide the resources they need as well as beauty (and food for yourself) to your garden. 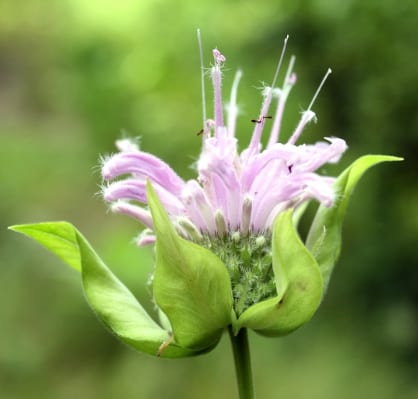 Not just for humans, Monarda fistulosa makes a great tea, but also attracts a myriad of wildlife species.

Planting for all developmental stages is the difference between creating a garden for wildlife to visit and a garden in which wildlife will live.  In many cases, trees are your best choices for providing host sites for wildlife. If your property were to contain maple, birch, cherry, and oak trees, you would have suitable host plants for 47 different species of beneficial wildlife including the threatened northern parula and imperial moth. Many woody species have the added benefit of providing wintering sights for wildlife as well. Tree cavities, areas under loose bark, piles of logs, and rocks are all great wintering sights for various wildlife species.

The issue of scale

Another common mistake in planting for wildlife starts with good intentions. You know that milkweed is good for monarchs so you plant one of those. You’ve heard that lupine is good for the frosted elfin so you plant one of those; your neighbor tells you how much bees like  Monarda, so you add one of those.  The next thing you know you’ve got a garden with one of a thousand different plants in it. In addition to being a designer’s worst nightmare, this garden will never support as much wildlife as the same area with multiple plantings of these species. The frosted elfin doesn’t want a lupine; it wants a wildflower meadow with hundreds of Lupinus perennis, the native lupine. (Be careful not to confuse this with Lupinus polyphyllus, a non-native species that does little for wildlife.) Especially when space is limited, choose a smaller number of important plant species and plant multiples of them. A garden with 50 wild bergamot (Monarda fistulosa) will support vastly more wildlife than a garden with one of everything.

What about those of us who only have an acre to work with? A quarter acre? An apartment balcony? While you won’t save the world with a few native species in the containers on your balcony, a city’s worth of people with balcony plantings can make a difference. Monarda fistulosa (wild bergamot), Pycnanthemum muticum (broad-leaf mountain mint), or Lonicera sempervirens (trumpet honeysuckle) are all great native species that work fabulously in containers. Be an example for your entire community. Once you have begun making positive changes in your garden, speak with your neighbors about doing the same in theirs. The more gardens that can be linked together, the greater the effect on wildlife overall. 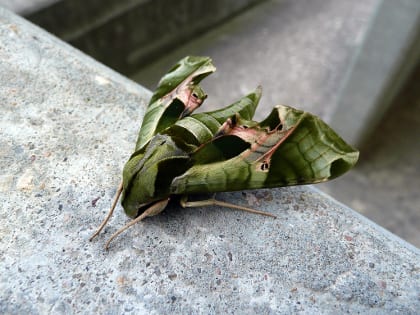 Eumorpha pandorus, the pandora sphinx moth is one of a handful of sphinx moth species which use Parthenocissus quinquefolia as a host plant. Photo by Michael D. Cheuvront.

Weeds in the garden

And then there’s the question of weeds. What is a weed anyway? Oxford dictionary defines a weed as “a wild plant growing where it is not wanted and in competition with cultivated plants.” We have a tendency to consider certain plants to be weeds no matter what the context, yet “weed” is all about context. This is why purple loosestrife is considered a weed in America, but in its native Eurasia it is simply a wildflower. Some common garden “weeds” are wildlife powerhouses and allowing some of these plants to remain on your landscape can make a huge difference in the ecological support your garden provides to the greater area. Take Parthenocissus quinquefolia (Virginia creeper) for example. The dreaded Virginia creeper vine has been labeled a weed by countless New England gardeners, and for good reason. On the other hand, this species is eaten by mice, chipmunks, squirrels, skunks, and other mammals while also providing nesting sites and cover for birds and small animals. The berries are an important source of antioxidants and fats, and the foliage acts as host for some very cool sphinx moths.

While you might not want Virginia creeper in a flower bed, why not let it grow over your stone walls? Or under the oak trees out back? 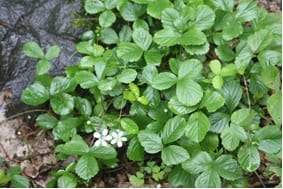 Rubus hispidus, in addition to its white flowers and glossy leaves, provides edible berries for wildlife.

Some common “weeds” can do great things for wildlife and while many of them may be a bit harder to work into a landscape, others can actually act as solutions to common problem areas. Some of these unsung heroes are Rubus hispidus (creeping dewberry), whose edible fruits feed countless birds and mammals (including humans) during the summer months, or Prunus serotina (black cherry). Commonly considered a “weed tree” by most landscapers, black cherry also provides edible berries (again for humans or wildlife), and the foliage acts as host for numerous lepidoptera: promethea moth, small-eyed sphinx, wild cherry sphinx, banded tussock moth, black-etched prominent, spotted apatelodes, yellow-necked caterpillar, tiger swallowtail, cecropia moth, saddleback caterpillar moth, io moth, striped hairstreak, and red-spotted purple, just to name a few.

Another unsung hero is cattail (Typha latifolia). How often have gardeners had to deal with the constantly wet spot in the middle of their lawns? It’s not wet enough for a pond but is far from dry enough to not get the lawn mower stuck at least once a season. Perhaps you have to put up with the roadside drainage ditch, not usually a selling point during the realtor’s tour of the property. While a ten-by-ten foot patch of cattails is not about to provide habitat for the local mink, you’d be amazed at how many animals rely on cattails during one (or all) stages of their life cycles. From the minks and blue heron of large cattail marshes, to the riparian sac spider and the smeared dagger moth of small cattail patches, these wetland herbs can still play a major role in wildlife habitat even on a smaller scale while also solving the issue of the dreaded “wet spot.”

From the simple act of adding a bird bath to your garden to the more involved conversion of the local drainage ditch to a miniature cattail marsh, there are many ways you can play a role in wildlife conservation. There is great power in large numbers of people making small changes. Be part of the solution.

Beautifying Public Places: The Importance of Plants
Ecological Design along the Blackstone: Creating a Clean River…within a River