By i.am.georgia.harris on January 15, 2021 in Landscaping for Wildlife, Wildlife Habitats

This piece originally appeared in the spring 2020 edition of Xerces’ magazine, Wings. Click to view the full spring 2020 issue. It is reprinted with the permission of the Xerces society.

Declining biodiversity has been making its way into the news more and more as researchers continue to record losses in plant and animal populations. Insects are no exception, and several recent studies that use long-term data sets show a marked reduction in insect abundance. For example, observations in Germany over a twenty-seven-year period found a 75 percent decrease in the biomass of flying insects; similar changes have been recorded for moths in Great Britain. Where I live, in California’s Central Valley, thirty-five years of survey data also show a drop in the richness and abundance of butterfly species. A recent paper by Matt Forister, of the University of Nevada, Reno, and Xerces Society staff showed that there is substantial evidence of diminishing diversity, abundance, and biomass across multiple continents. A variety of factors contributes to these insect declines, including the loss of habitat, pesticides, invasive species, and, increasingly, climate change. 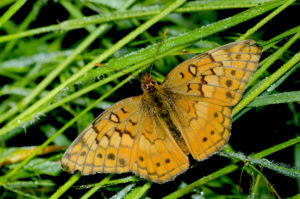 The variegated fritillary (Euptoieta claudia) may be found throughout the United States (except for the Pacific Northwest) and in a variety of open sunny habitats, including meadows, prairies, and roadsides. It can have as many as four generations in a year. (Photograph © Bryan E. Reynolds.)

The United States is home to approximately eight hundred species of butterflies. These lovely insects can be found in a variety of habitats, from deserts to grasslands to forests, from ocean beaches to mountain tops. The caterpillars usually feed on leaves and other plant parts—the exception being the harvester (Feniseca tarquinius), whose caterpillars are carnivorous and eat aphids—while adults feed primarily on nectar, but may also find nourishment on rotting fruit, sap, honeydew, or dung.

Climate change affects butterflies in a variety of ways. While it is possible that some species may benefit, many more will be negatively impacted. The distribution of species is likely to change as butterflies move to follow optimal conditions. Shifts of several butterfly species have already been observed, often with a shrinking of the southern portion of their ranges. Phenology, or the timing of biological events, can also vary as the climate changes. One concern is that the life cycles of butterflies and their host plants can become misaligned, with plants growing earlier in the season, leaving caterpillars with little to eat. Other changes to plant communities may also have an effect on butterfly populations; increases in drought frequency and severity, for instance, will reduce the amount of nectar available to adult butterflies.

Species-diverse, flower-rich grasslands are a precious but disappearing asset. More than 99 percent of grasslands have been lost in some areas. Maintaining the remaining grasslands and creating new connections between isolated sites will help grassland butterflies adapt to changing environmental conditions. (Photograph by Aaron Carlson, Flickr [CC BY-SA 2.0].)

In order to know how to buffer the negative effects of climate change on butterflies and other insects, we need to be able to predict which species might be most impacted. Specialists are among the ones most likely to be vulnerable. A specialist butterfly is defined by what its caterpillars eat. While an adult will drink nectar from a variety of plants, the caterpillars may feed on only a small number of species. Some caterpillars feed on just a single species of host plant; others are slightly less selective, choosing plants from a single genus or family. Either way, such specialization may make these species particularly likely to suffer as a result of climate-change-caused reductions in the abundance of their host plants.

Also highly vulnerable are species that are already under stress from habitat loss, say, or pesticide use, since climate change can interact with such stressors in a way that magnifies their impact. For example, exposure to a particular pesticide may not be fatal for a butterfly, but, combined with stress from a heatwave or drought, the exposure may become lethal. This is potentially a problem for a wide range of insects, but, for species that are already declining, climate change is highly likely to put them at greater risk.

An important way to protect butterflies—whether specialist or generalist, declining or abundant—from the negative consequences of climate change is to increase habitat availability and connectivity. Larger patches of habitat can support larger populations, which are generally less prone to extinction than smaller ones. Creating greater connectivity between areas of habitat provides a number of benefits: it allows for larger populations and it enables species to shift their distributions to places with more favorable conditions. It also increases gene flow, potentially boosting the degree of genetic variation in a population and increasing the likelihood that a species will be able to adapt to a warmer climate. 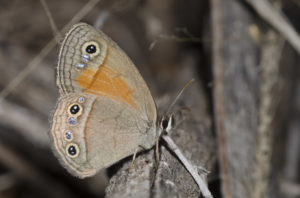 While butterflies are often associated with flowers or shrubs, there are many butterfly species whose caterpillars feed on grasses, sedges, and rushes. Many of these species are skippers (family Hesperiidae), and these come primarily from two subfamilies—the grass skippers (Hesperiinae) and the skipperlings (Heteropterinae)—although there are several more subfamilies with a few species in each. Skippers and skipperlings are often orange, brown, or grey in color, and tend to have prominent eyes, stout and relatively hairy bodies, and short antennae. Butterflies in the brush-footed subfamily Satyrinae, which includes the satyrs and wood nymphs, also tend to use grasses and grass-like plants as caterpillar hosts, and, although larger than skippers, these butterflies are also usually brown. Because most of these grass-specialist butterflies are small, nondescript, and easily overlooked, there is much less known about their natural history than about that of their flashier relatives. For some of these species, not even the native host plants are known.

An illustration of how little is known about a seemingly well-known butterfly comes from Xerces’ work on the mardon skipper (Polites mardon). In 2000, when the mardon skipper was listed as a candidate species under the U.S. Endangered Species Act, common wisdom was that its caterpillars fed on fescue and that the butterflies overwintered as chrysalises. In an effort to conserve this butterfly, Xerces and partners conducted surveys across the species’ range, studied the impacts of management activities such as fire, and implemented restoration and habitat management at dozens of locations. 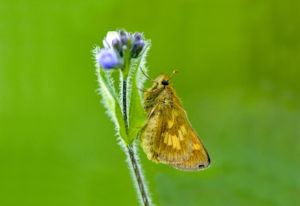 Unlike many species, the mardon skipper (Polites mardon) has been the focus of much study, which helps inform habitat management plans. (Photograph by Tom Kogut, USFS.)

Interestingly, when researchers from Xerces and the University of Washington began investigating the skipper’s life history, it was found that its females oviposit on multiple plants, including fescue, sedges, and oatgrass. In addition, field studies by our team suggested that those living in the Cascade Range overwinter as caterpillars. This experience was a clear reminder that in order to successfully conserve a species we must understand what it eats and how it lives. Many grass-specialist butterflies are known to be declining, primarily due to habitat loss. Currently, there are thirty-two butterflies protected under the federal Endangered Species Act and one more that is a candidate for protection. Four of the protected butterflies are grass skippers—Dakota skipper (Hesperia dacotae), Pawnee montane skipper (Hesperia leonardus montana), Poweshiek skipperling (Oarisma poweshiek), and Carson wandering skipper (Pseudocopaeodes eunus obscurus)—but there are many more imperiled grass-feeding butterflies that are not protected under the Endangered Species Act. Habitat loss is a primary threat to these species, and grassland habitat continues to disappear. Other threats, including pesticides and invasive species, also play a role, and the effects of climate change are becoming increasingly apparent.

Grasslands have frequently been plowed under or built upon, their treeless landscapes are easy to convert to other uses. More than 98 percent of the tall-grass prairie that covered the Midwest and once stretched from Manitoba to Texas has been destroyed. Other grasslands have fared even worse: those of California’s Central Valley and the Palouse prairie of Washington and Idaho are both reduced to less than 1 percent of their historic area. In the face of such losses, every scrap of grassland habitat becomes significant. 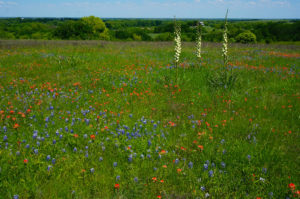 Grasslands require ongoing management and care to maintain the open, species-rich conditions that many butterflies need. Carefully prescribed actions such as mowing or burning are often necessary to prevent gradual decline and eventual loss. (Photograph by the Xerces Society / Anne Stine.)

There are seventeen million acres of roadsides in the United States, often dominated by grasses, and these and other rights-of-way present a valuable opportunity to increase habitat and habitat connectivity for butterflies and other insects. Xerces has a long history of working with the Federal Highway Administration and departments of transportation across the country. We have produced many documents for roadside planners and maintenance crews, including scientific reviews and guidelines, which can be found on the Xerces website. We are currently working on a guide to creating climate-smart roadside habitat for pollinators. It will include profiles of imperiled pollinators, with an overview of the effects, both positive and negative, that roadside management can have on these species, along with recommendations for practices that can contribute to their conservation. We are also working to provide guidance for assisting the four ESA-listed skippers and ten additional species of grass-feeding butterflies—along with a suite of other imperiled pollinators—so that state transportation departments can better manage roadside habitat to protect these under-appreciated creatures.

Climate change poses a considerable threat to the biodiversity of our planet, particularly for species that rely on already declining habitats. Protecting and restoring grasslands has a role to play in mitigating the magnitude of the change in climate and—particularly if we improve connectivity among habitat remnants—is key to sustaining butterflies and other invertebrates that live in these remarkably diverse and beautiful places.

Angela Laws is the Endangered Species Conservation Biologist Climate Change Lead for the Xerces Society. Based in Sacramento, California, Angela is working on habitat restoration for pollinators and monarch butterflies in the Central Valley. Her role at the Xerces Society also involves incorporating climate resiliency into pollinator restoration projects. Angela has over 15 years of experience studying arthropods in grassland habitats, including studies of how climate change can affect species interactions. She received a master’s of science in ecology from Utah State University, and a Ph.D. in biology from the University of Notre Dame.

Five Things I Learned This Year
The Four Laws of Ecology