By i.am.georgia.harris on January 14, 2022 in Conservation, Developing Healthy Landscapes


Reprinted by permission from paulstamets.com/mycological-strategies.

We are fully engaged in 6x – the 6th greatest extinction of life on this planet known thus far. But this extinction is unique. Not caused by a celestial event like an asteroid impact, or the earthlier eruption of volcanoes or methane hydrate releases trapped in the ocean’s sediments, 6x is uniquely caused by an organism. Us. Not only we are the cause, but also, we are likely to be one of its victims.

Some can argue that extinction events are natural. Indeed they are. 99+% of all species that have existed are now extinct. But we are the first species to be cognizant that our actions are causing this extinction. If we were (or are to be?) truly intelligent organisms, we would work together as a global chorus to prevent our impending demise. Our descendants and this planet will ultimately judge how intelligent we really are. Unfortunately, this judgment may well be beyond the lifetimes of those reading these words, but not beyond the soon-to-be-born generations.

Here are sobering facts that we are in a crisis of historic proportions. We have an estimated 8.3 million species on Earth. But, we are losing nearly 30,000 per year, meaning in the next century, we will lose ~ 3,000,000. And this is if the trends are linear, but many conclude the extinction rates are accelerating due to climate change caused by our population exploding. Sadly, what this may mean is that in a century we will lose more than 1/3 of the species on this planet and we are losing species faster than we can identify them. This loss of biodiversity is a direct threat to our health and food safety including and the very soils that give us life.

Nature is bound by forces, which mystics, philosophers and religions seek as ‘universal truths’. 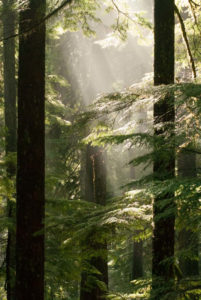 Old-growth forest with rays of Sunlight.

Universal Truths in nature are sometimes so obvious that they are easily missed. One Universal Truth is that matter and life are based on network theory. The organization of galaxies, dark matter, neurons, roots, computer networks, social media, music, mathematics, and … mycelium are all structured similarly, conforming to string theory, interlacing each other through the orders of magnitude of existence.

From these networks, matter organizes; life emerges. This is the way of Nature.

Networks allow for sharing resources, rapid adaptation, epigenesis and evolution. The interconnectedness of nature holds all living organisms in elaborate networks, where alliances of organisms benefit from creating collaborative communities, and in common staves off disruption  – whether they be from pathogens, catastrophia, and or the ebb and flow of the universe.

We are not one organism. Only recently scientists have well established that we are composed of more than 100 trillion “alien” cells, mostly bacteria, compared to the 10 trillion “native”, human cells. This consortium gives us a host of collaborations and defenses that help maintain the equilibrium of ever-changing communities. Called the “microbiome”, this new field of study has excited the medical communities as genomics explore what has been largely hidden from modern medical science. Understanding the microbiome has implications for improving health, preventing and curing disease.

Although quorum sensing in bacterial networks – which helps an organism in a population of many to act as one –only now are we getting the sense that quorum sensing is happening at the most fundamentally subtle levels between species of organisms. In essence, the common language we share with all organisms is composed of a molecular flow of nutrients and messaging molecules we constantly exchange with one another.

Matter begets life. Life first appears as single cells. Single cells become multicellular. Multiple cellular organisms grow linearly, and then fork, branch and networks – the foundation of communities – are born. For this reason, I believe we will find network-based organisms throughout the universe. This is the way of Being.

We are all connected by the flow of matter. Life forms are just one assemblage. When we “die”, we de-molecularize into our cellular constituents but do we truly die and cease being? I do not think so. We all share in the same consciousness, limited by perceptive and cognitive constraints. Our matter is liberated from its human form, decomposed by fungi, bacteria, and protozoa to be returned to the networks, which ultimately gave us birth.

Between 750 million and 570 million years ago the Earth underwent a great cooling and the majority of the planet was covered with a sheet of ice, save for a few occasional slivers along the equatorial regions. Algae, bacteria and fungi thrived under the miles of ice, warmed by geothermal vents and subglacial volcanoes.

Around 650 million years ago, humans shared a common ancestry with Fungi. Episthokontha is a new super-kingdom to recognize that common heritage, joining animalia (us!) with fungi together. Around 570 million years ago, probably much earlier, the fossil record evidence that multicellular organisms flourished. At around that time, debatably plus or minus a few hundred million years, life marched to land, made possible by the cooperation of fungi and plants forming a holy union. Without fungi, the vast majority of terrestrial plants that we know today could not exist.

From 420-380 million years ago, a giant fungus dominated the landmasses of Earth, reaching heights in excess of 10 meters, weighing tons, by far the tallest of all organisms on land. Known as Prototaxites, this fungus would have attracted lightning strikes and been a rich site for rapid evolution.  Around 300 million years ago, the supercontinent Pangaea formed, whereupon all landmasses were sutured together.

Then, 252 million years ago, between the Permian and Triassic, a great cataclysm visited the earth, resulting in a massive extinction of species. Scientists debate the cause: a cosmic impact from an asteroid? Volcanoes erupting in Eurasia? Methane hydrate bursts from the ocean? I do not see these as mutually exclusive; an asteroid impact could have triggered volcanic eruptions, the emission of toxic methane hydrate. We do know the Earth was shrouded in dust, sunlight was cut off, the majority of plants and animals died…. and fungi inherited the Earth. Those organisms that paired with fungi, whose mycelial networks do not need light, had a better chance of survival. At least 10 million years would pass before biodiversity levels returned to pre-extinction levels.

Eventually, the continents of Pangaea delinked, drifting apart, as Gondwanaland formed 200 million years ago. The species of Earth, no longer lived on common ground. Rapid species evolution ensued as species differentiated emerging through diverging branches on the tree of life.

As the Earth continued its voyage around the sun for another 185 million more years, another asteroid hit the Earth, killing the dinosaurs along with hundreds of thousands of species. This extinction event set the stage for our emergence. Again, the Earth became shrouded in dust, sunlight was cut off, fungi re-inherited the Earth, and those organisms that paired with fungi would be more likely to survive the ecological holocaust. Small creatures did survive – including our vole-like ancestors. Paleobiologists have identified one primary fungus that surged to the forefront, decomposing the decimated forests: the now-extinct Reduviasporonites. 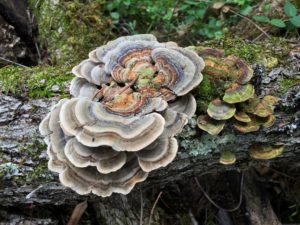 Trametes Versicolor Turkey tail is one of the most common mushrooms in North American woods,

With the passing of each generation of life, fungi lay down lenses of soils by decomposing the deceased, creating the foundation of the food webs for the descendants to come. These networks, through eons of experience, governed by natural selection, have learned how to host communities of plants, algae, bacteria, protozoa and archaea. Even more so today, this fungal scaffolding remains critical for the multidirectional flow of nutrients via mycelial networks. Moreover, we are just learning that these networks send electrical signals, so we are likely understating their innate abilities.

Within its matrix are cavities holding water, secreting toxin-decomposing enzymes, and mineral-harvesting acids, releasing nutrients, ultimately balancing microbial populations beneficial to the host ecosystems. These “mycobiomes” are essential for the emergence of ecosystems – giving rise to the forests, plants, animals and other creatures so that their biomass can fuel the fungi.

The network design of mycelium gives it center stage in the design of our food webs. The lessons of evolution have repeatedly shown that alliances with fungi can help us survive. With our knowledge base today, albeit limited, we now know enough to engage fungi to help ecosystems become sustainable.

Today, we only have 10-15% of the forest debris that nature has needed to build the food webs for sustainable ecosystems. Widespread deforestation, factory farming, population expansion, industrialization and concomitant pollution are ongoing threats imperiling our ecosystems and the foundation of our food webs at a time when unprecedented waves of humans walk the Earth needing water, sustenance and shelter.

What do I recommend? From a pragmatic point of view – knowing that if it is not practical and economical, then any suggestions will face insurmountable obstacles. So, I make these recommendations, as they are both ecologically rational and economically sustainable. I emphasize solutions using mycelium’s innate network design which will yield immediate and long-term benefits.

Myco Practices for Protecting our Biospheres 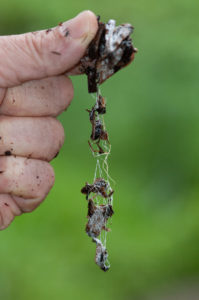 Stropharia rugoso-annulata or Red Wine Cap Mushrooms are mushrooms native to the Northeast that can be found naturally in garden beds, lawns, and forest edges.

Mushroom cultivation centers should be located in every community for recycling debris and re-invented as environmental healing arts centers. These would teach children and adults on mycological solutions and augmenting synergistic relationships with plants using mycorrhizal, endophytic, and saprophytic fungi. See www.fungi.net for many resources that will help create a worldwide web-based network that can share knowledge.

We are on this Earthship together. Respecting the Earth, learning from evolution, and putting into practice ecologically rationale myco-remedies can help make the course change needed to prevent the 6th greatest extinction on this planet. We have the wisdom and courage to chart a new course. 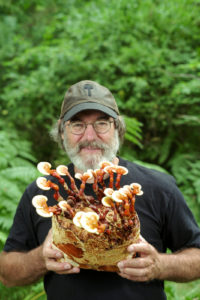 Paul Stamets, speaker, author, mycologist, medical researcher and entrepreneur, is considered an intellectual and industry leader in fungi: habitat, medicinal use, and production. He lectures extensively to deepen the understanding and respect for the organisms that literally exist under every footstep taken on this path of life. His presentations cover a range of mushroom species and research showing how mushrooms can help the health of people and the planet. His central premise is that habitats have immune systems, just like people, and mushrooms are cellular bridges between the two. Our close evolutionary relationship to fungi can be the basis for novel pairings in the microbiome that lead to greater sustainability and immune enhancement. Paul’s philosophy is that “MycoDiversity is BioSecurity.” He sees the ancient Old Growth forests of the Pacific Northwest as a resource of incalculable value, especially in terms of its fungal genome. A dedicated hiker and explorer, his passion is to preserve and protect as many ancestral strains of mushrooms as possible from these pristine woodlands. His research is considered breakthrough by thought leaders for creating a paradigm shift for helping ecosystems worldwide.