At the end of a block of brick row houses in the Dorchester neighborhood of Boston sit four abandoned lots overgrown with shoulder high weeds. Six raised garden beds speak to the desire of area residents to reclaim this space and to build a community garden in their neighborhood. Today, those lots are poised to become a new public green space that will provide residents of all ages a place to gather, attend public performances, enjoy nature, and grow their own food. 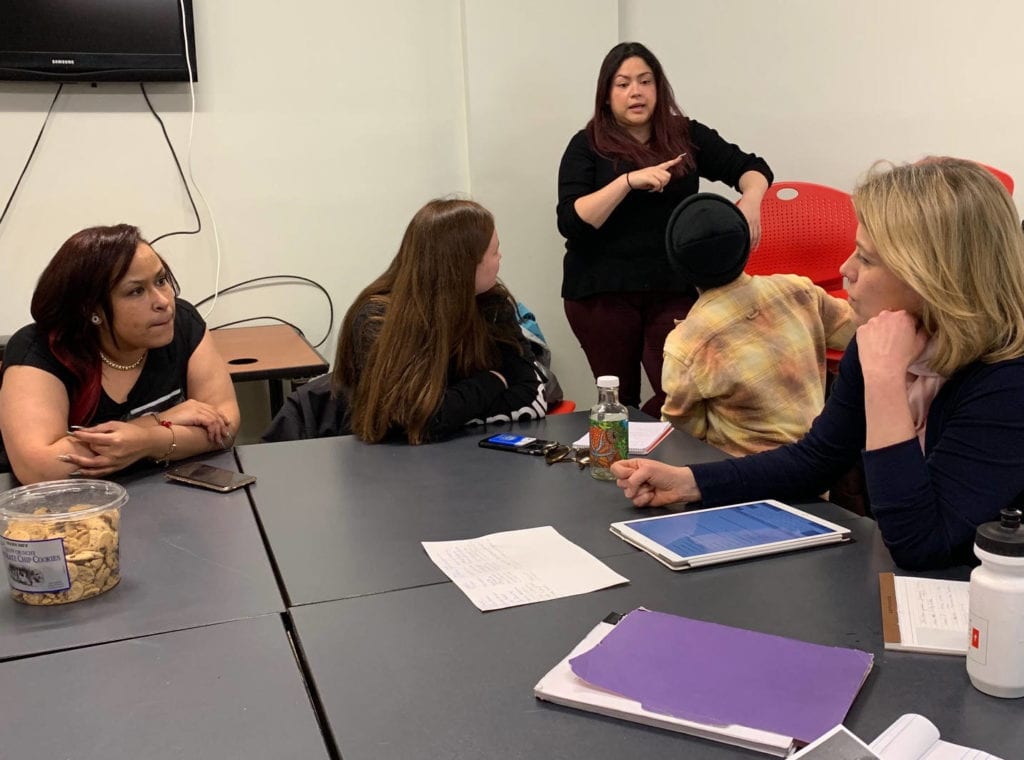 The Magnolia Street Garden is one of eight projects undertaken last year by Community Outreach Group for Landscape Design (COGDesign), a non-proﬁt that offers pro bono landscape design assistance to community-initiated projects. COG is a ﬁrst step for community groups to bring their visions to fruition. COG matches design professionals with community stakeholders and shepherds a process of three community meetings in which the community’s needs and wishes are heard. The resulting designs help convey the community vision to potential funders and partners and are a vitally important ﬁrst step in the process of bringing a park, community garden, or playground to life. 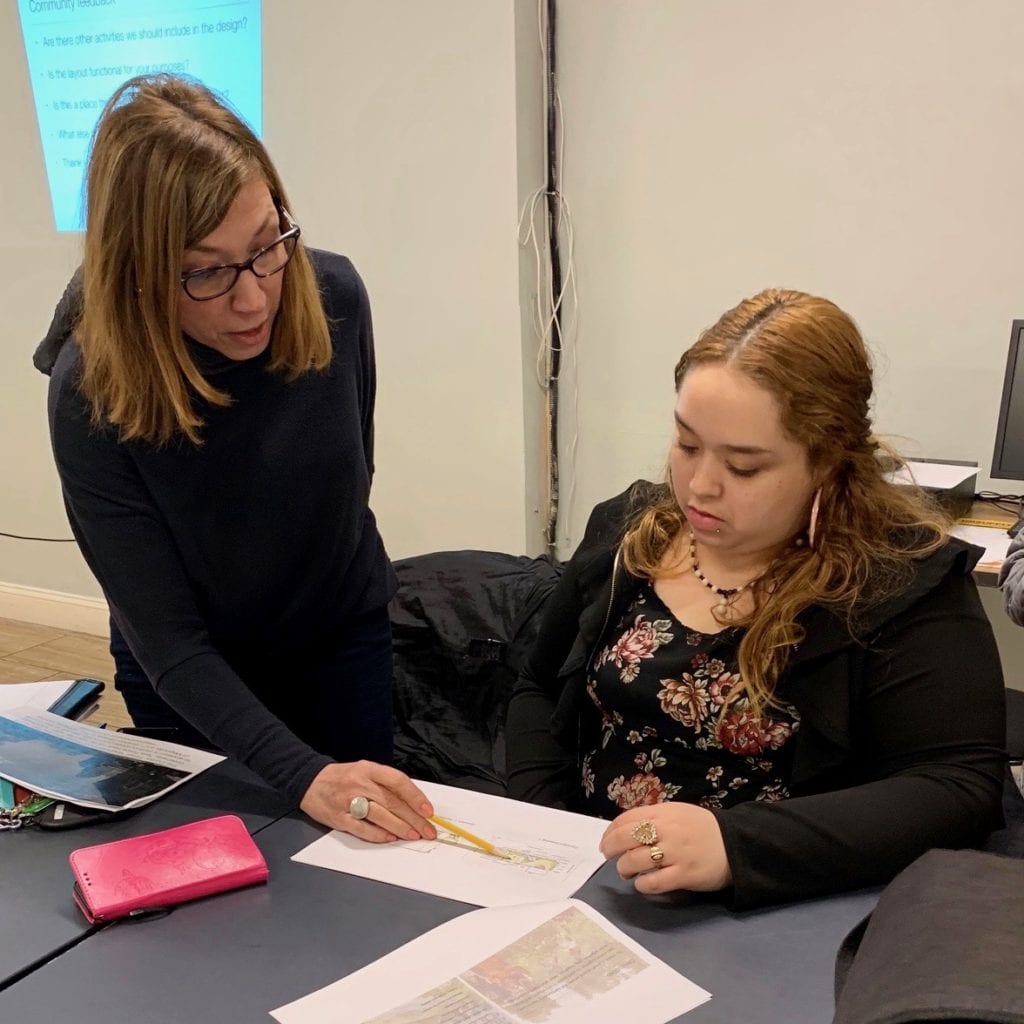 For the Magnolia Street project, three Roxbury-based nonproﬁts banded together to bring this long-anticipated park and community garden to fruition: Dudley Neighbors, Inc (DNI), the community land trust arm of DSNI (Dudley Street Neighborhood Initiative), Fairmount Greenway Task Force (FGTF), and Alternatives for Community and Environment (ACE), a youth centered organization focusing on environmental justice. Meetings were held nearby in the ofﬁces of the Dorchester Bay Economic Development Corporation (DBEDC), who also had a stake in the project as some of the housing they manage is adjacent to the site. DNI will own the land eventually and FGTF will connect the park to the Fairmount Greenway, an emerging, 9-mile walking and biking route.

There are still 378 empty, city-owned land plots in Roxbury, comprising a total of 1.57 million square feet. With the push for new housing in Boston, over half are in some stage of disposition, meaning the city is actively working to release them for development. New and affordable housing is deﬁnitely needed, but equally important is the preservation of open space in urban areas.

The good news is that as of November 2019, this particular overgrown group of lots that will be Magnolia Street Garden has been cleaned up, fenced, and leveled out. The schematic design delivered in June was submitted to the city in September with Magnolia’s application to the Community Preservation Act (CPA) for open space funding. 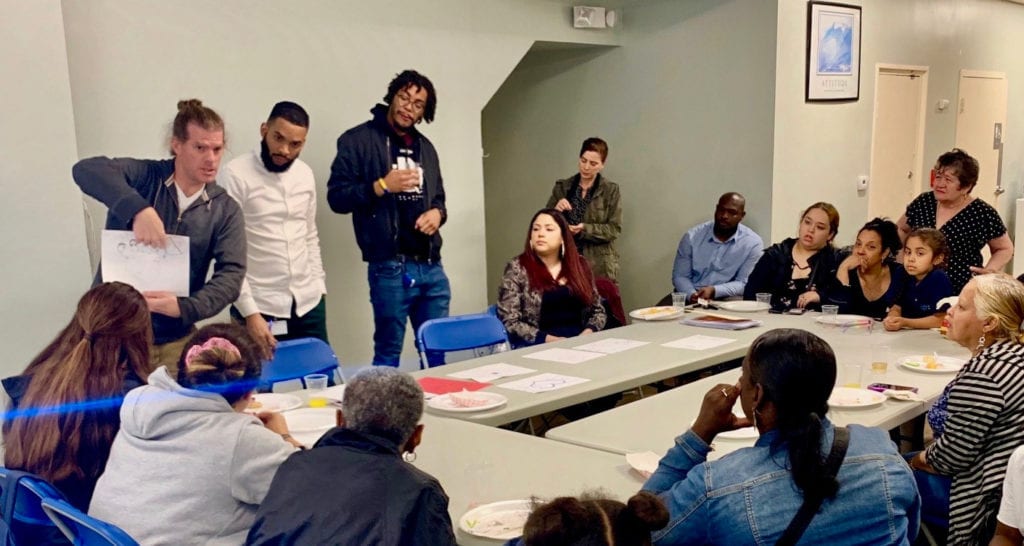 Last summer, a mural was painted on the adjacent row house by students from the Boston Student Advisory Committee (BSAC), a citywide body of elected student leaders representing most Boston public high schools. BSAC received funding for the mural and to plant a tree in the park from a charity started by students who survived the shooting at the Marjorie Stoneman Douglas High School in Parkland, Florida. The community process around the mural, led by Boston artist Alex Cook, brought to light the neighborhood’s desire to create something that represented peaceful interaction in a beautiful, safe place. 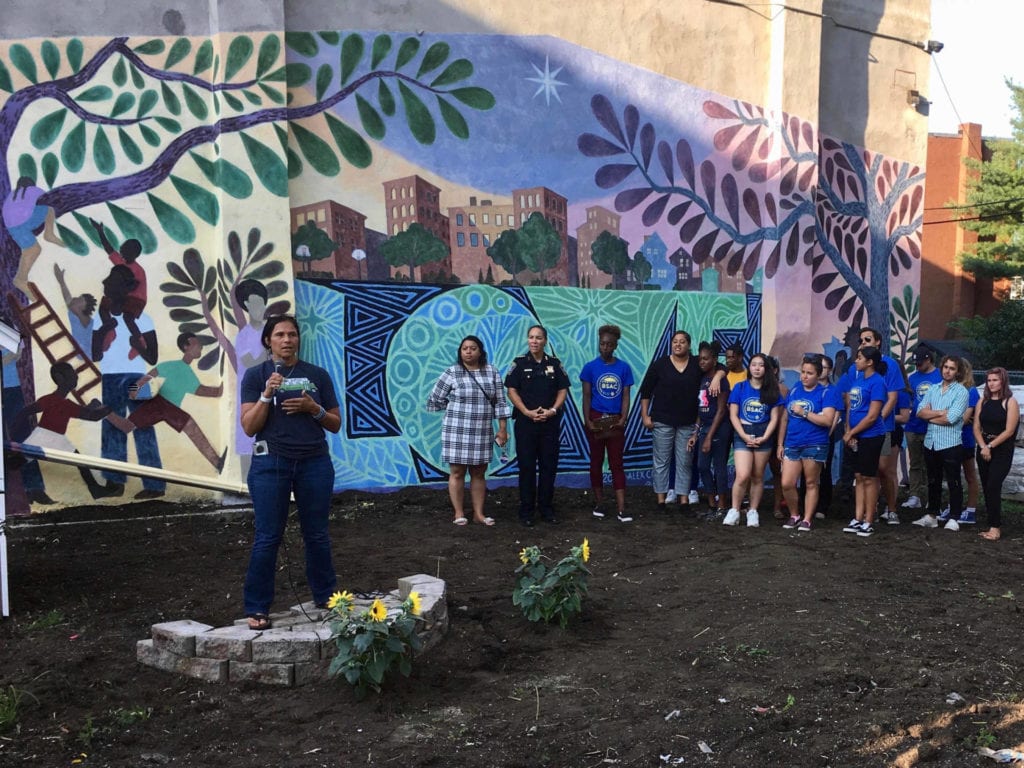 At a dedication ceremony in August, many local ofﬁcials spoke about the importance of safe public space, neighborhood-initiated work and of having an ADA accessible series of garden beds to grow your own food. All the speakers were enthusiastic about the BSAC involvement and the collaboration of three nonproﬁts in taking control of these open lots.

With COG’s help, Magnolia Street Garden is moving quickly towards becoming the community space that this neighborhood envisions. For COGdesign, the process of designing a green space is always a community effort. The door is never closed, and all neighborhood voices are encouraged to participate in the process. The community meeting process COG encourages was lively and productive for designers Hadley Berkowitz and Christine Tullius who became friends at the Boston Architectural College (BAC) Landscape Institute and decided to team up to work on this project.

“Hadley and I were so impressed with the dedication of the neighborhood residents who have worked for over a decade to claim this space as their own,” says Christine. “The community meeting process outlined by COG provided us with invaluable information that drove our design. For example, residents felt strongly that the site should accommodate people of all ages and abilities, and our design of the plaza reﬂected that input.” 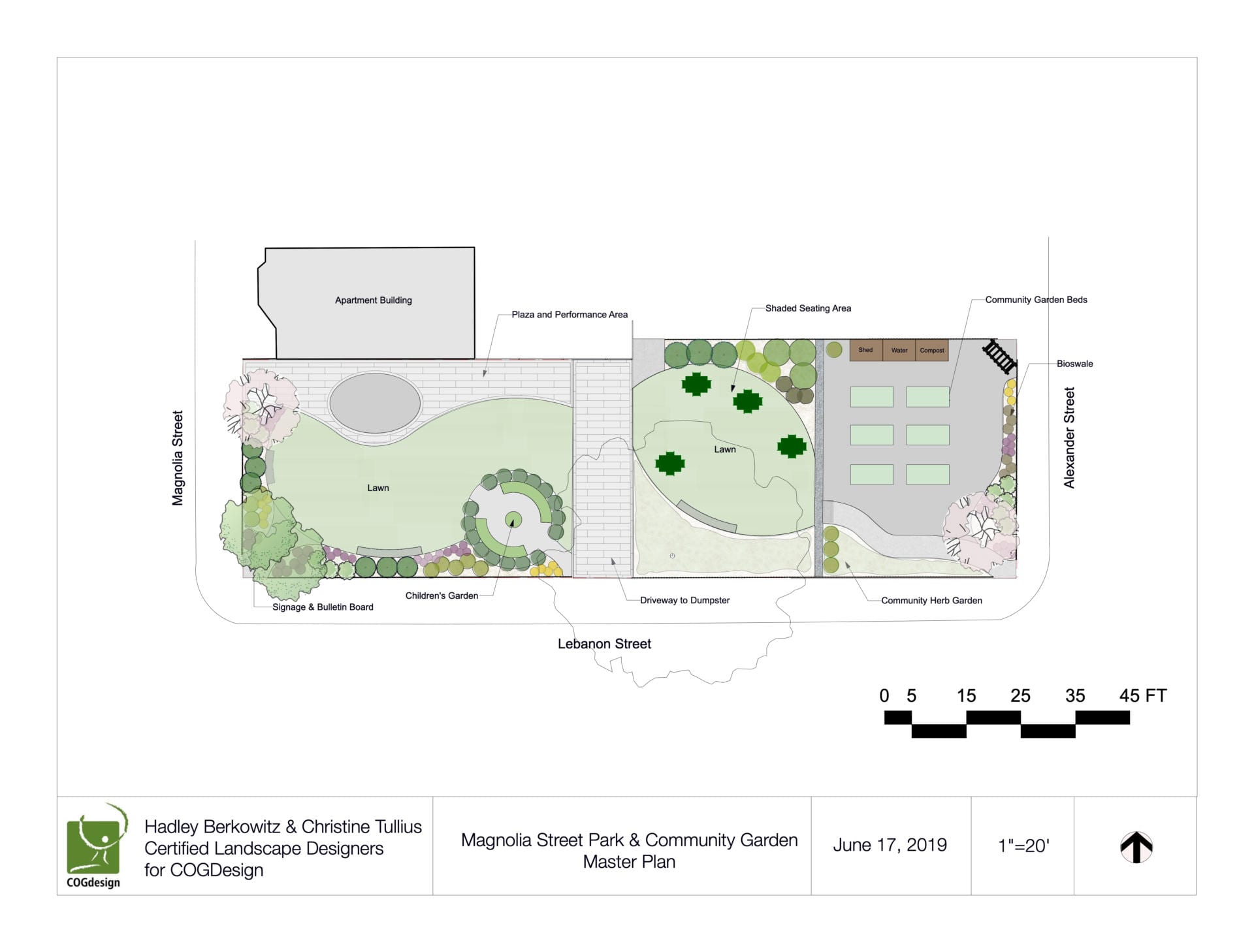 Hadley and Christine presented two separate concepts for the park in March. By April, they were working on the ﬁnal schematic plan: a synthesis of public park and community garden.

The schematic design which COG designers provide helps convey the community vision to potential funders and partners and are a vitally important ﬁrst step in the process of bringing a park, community garden, or playground to life. This merging of community knowledge and technical expertise results in conceptual plans that position client organizations to successfully pursue funding and implementation opportunities as they move forward.

The plan incorporates active and passive areas in which to meet including: a lawn surrounded by native trees, shrubs, and perennials; a circular children’s garden; and a paved performance space under the new peace mural. As you move east towards Alexander Street, you cross the driveway leading to the redesigned dumpster space in the back. Unauthorized use of that dumpster had allowed rats to gain a foothold on the lots. To address the problem, a new higher fence will be erected, so trash can no longer be strewn about by neighbors trying (and failing) to throw bags of trash into the dumpster. And only residents will be able to access it with a key.

“As designers, we understand the importance of using native plants to provide habitat and increase biodiversity, particularly in urban settings where habitat is highly fractured or missing altogether,” Hadley says. “Choosing plants that attract a variety of birds, butterﬂies, and other wildlife beneﬁts not only the environment but also park visitors by providing a rich, sensory experience in which to play, work, relax, grow food, and enjoy all the beneﬁts of being in nature. The plants we selected also happen to be beautiful and provide the site a sense of place and create a landscape that is unique to our region.” 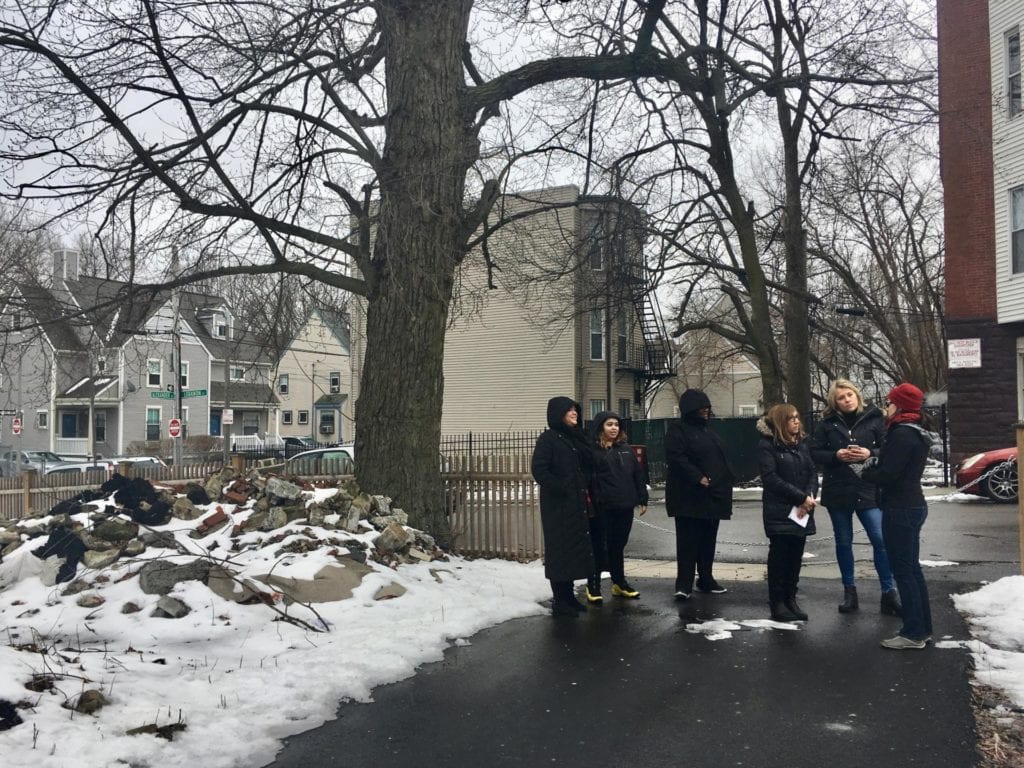 The Magnolia Street Garden is an exercise in placemaking; it promises to be more than a park and community garden but a vital place to foster community, to build cohesion, and to engender stewardship. The Garden will increase resiliency, both in terms of climate change and in terms of neighborhood independence. We came to celebrate the beautiful peace mural in August, and we look forward to celebrating the opening of the garden in 2020.

COG is much more than a volunteer landscape design group. We offer opportunities to both experienced and emerging design professionals to work in underserved communities. Often these communities meet the deﬁnition of an “environmental justice community,” where there is a disproportionate exposure to environmental hazards and where pollution and socioeconomic vulnerabilities disproportionately burden people of color. The work involves more than giving back. For the designers it’s about gaining experience in the design of public spaces and learning about community building with a diverse group of constituents. For our community clients it means creating neighborhood cohesion and gaining access to the process that a schematic drawing brings.

Each year as we approach the fall equinox, COGdesign wraps up the year’s work and begins a new cycle by sending out our annual call for projects. Come November, we accept somewhere between ﬁve and ten of the many applications received and then issue a call for designers. We try to match designers in pairs to our projects; someone who has less experience with someone who has more. Part of our mission has always been to provide recent landscape design graduates and current students with experience working outside of the private realm. We’ve fulﬁlled our contract with a community group when the designers have delivered ﬁnal schematic drawings with a planting plan, a rough maintenance list and cost estimate. From this point community groups use the drawing to move towards the next steps: pursuing funding and implementation opportunities and, if they don’t own it already, gaining ownership of the land.

Jennifer Kimball joined COGdesign as Executive Director in October 2017.  An experienced writer and accomplished graphic designer, she earned a Certificate in Design from the Landscape Institute at the BAC, served as chair of the LI Network Group, and served two years on the NELDA board. She is also a highly acclaimed singer/songwriter who has managed successful dual careers in landscape design and music for almost two decades, with three solo records to her name. With former LI Director Heather Heimrack, she founded the Healey School Campus Planning Group to “green” the school’s asphalt surroundings. Partnering with the adjacent Mystic River Community, the Healey team received a grant though the Somerville Community Preservation Act and is on target to complete construction of approved plans in 2020. She is thrilled to be bringing her passion for community-driven projects and environmental justice to COGdesign.