This year I became a gravel gardener.

My passion for plants was first sparked while studying landscape architecture at the University of Guelph. I was inspired by the work of Piet Oudolf and other designers in the UK, US, and Europe who were pushing the boundaries of naturalistic planting design. The more I learned, the more interested I became in the various techniques designers used to create dramatic, biodiverse plantings, especially for urban public spaces. The first introduction to the concept of growing plants in gravel came in 2013 via Piet Oudolf and Noel Kingsbury’s book Planting: A New Perspective and from Kingsbury’s blog, both of which highlighted the work being done in Germany, led by Cassian Schmidt and others, to create very low maintenance perennial plant communities for public spaces in cities. The key to their success was a gravel mulch layer, placed over top of the existing soil or subsoil. 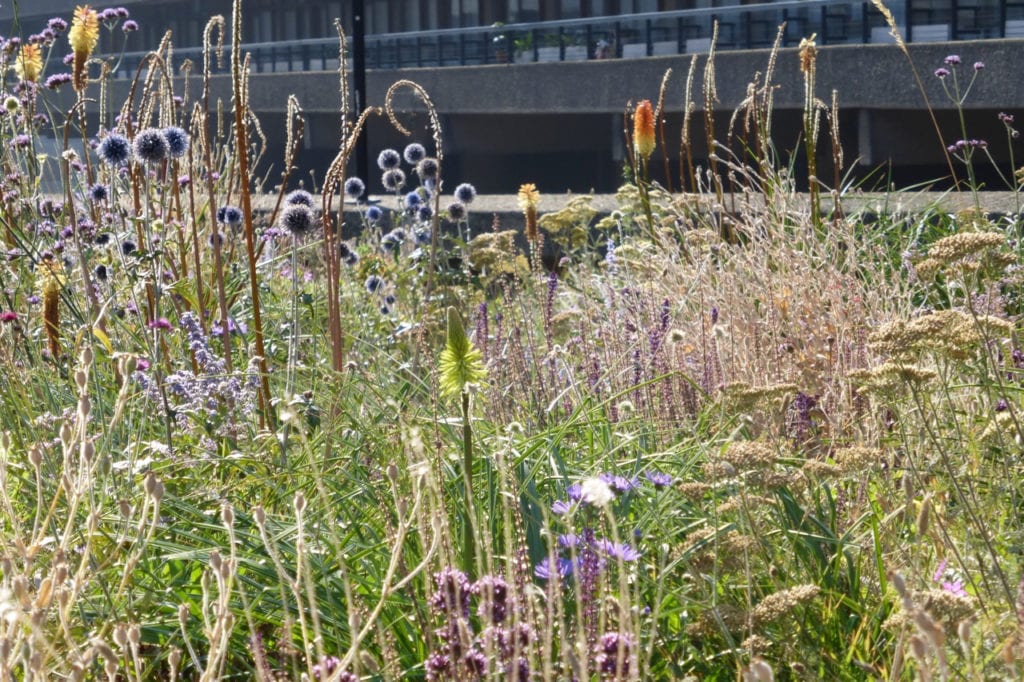 Further reading led me to James Hitchmough and Nigel Dunnett from the University of Sheffield, who were doing similar work. Dunnett had begun working with green roof substrates to create dry meadow plantings, most notably at the Barbican Centre in London. Some of Hitchmough’s recent research focused on growing plants in 20cm (8”) deep mulches of pure aggregate over soil. Aggregate mulches and substrates have many benefits but most important is that they resist weed invasion while encouraging infiltration of rainwater. This allows plants to establish effectively without weed competition and dramatically reduces the amount of yearly maintenance time.

The use of gravel and aggregate mulches is an exciting new approach to bring beautiful, biodiverse planting into the city, without the need to hire a staff of highly skilled gardeners.

Establishing the Trial Garden in 2018

After attending the “Urban Growth” conference in Lund, Sweden in 2017, which focused specifically on creating diverse low-maintenance plantings in cities, I came home more inspired than ever by the potential of gravel gardening. I bought the definitive German reference book (called Staudenmischpflanzungen), spent hours translating it on Google, and dove deep into as much academic literature as I could find. While inspiring, most of the information came from either the UK or Germany. I needed to test the ideas in our more extreme North American climate, particularly in my region of Ontario. In the spring of 2018, I was awarded a research grant from the Landscape Architecture Canada Foundation to establish a trial garden where I could experiment with growing a range of different perennials and grasses (native and non-native), in aggregate-based substrates of varying depths and compositions. 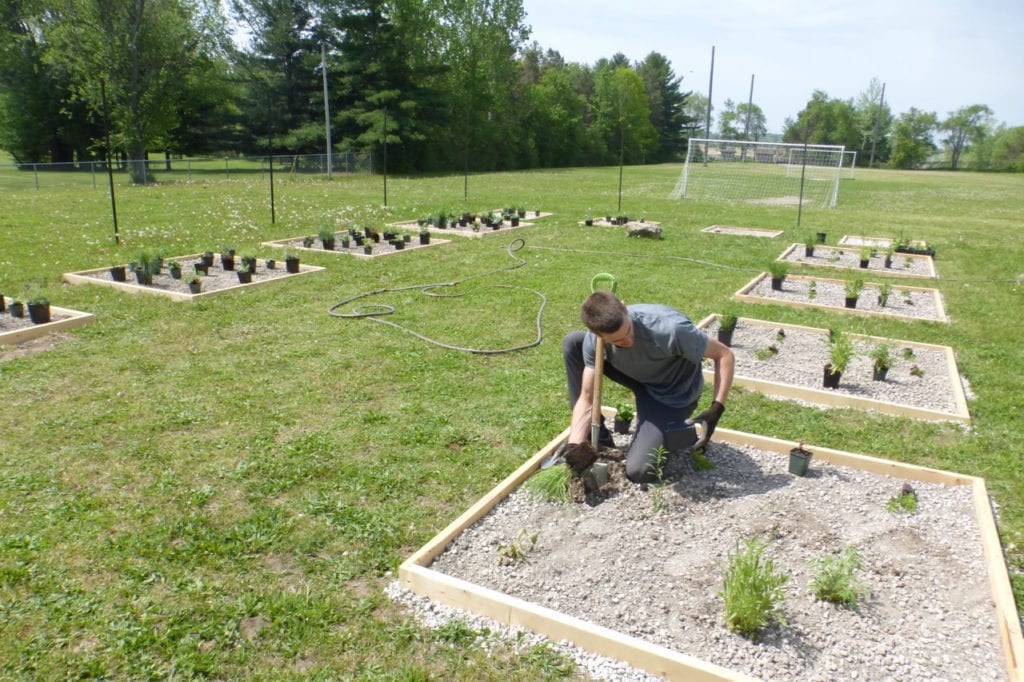 Planting the first phase of the trial garden in late May, 2018.

The first phase of the garden was laid out and planted in late May 2018. The substrates tested were either deep layers (8” and 12”) of a 3:1:1 mixture of recycled concrete, coarse sand, and green waste compost, or thinner layers (6”) of pure recycled concrete, or a 1:1 mixture of recycled concrete and coarse sand. The beds were planted with a range of perennials and grasses in different container sizes (from landscape plugs to 1-gallon containers) and were regularly irrigated until mid-July. The gardens only required two weeding visits during the first growing season. 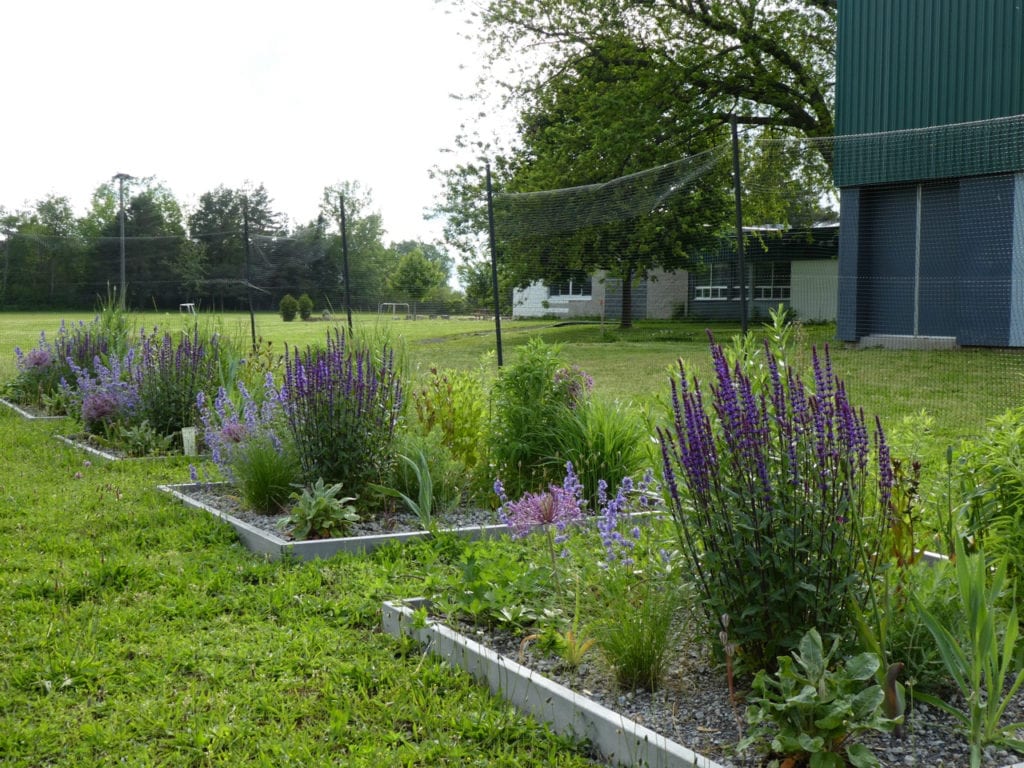 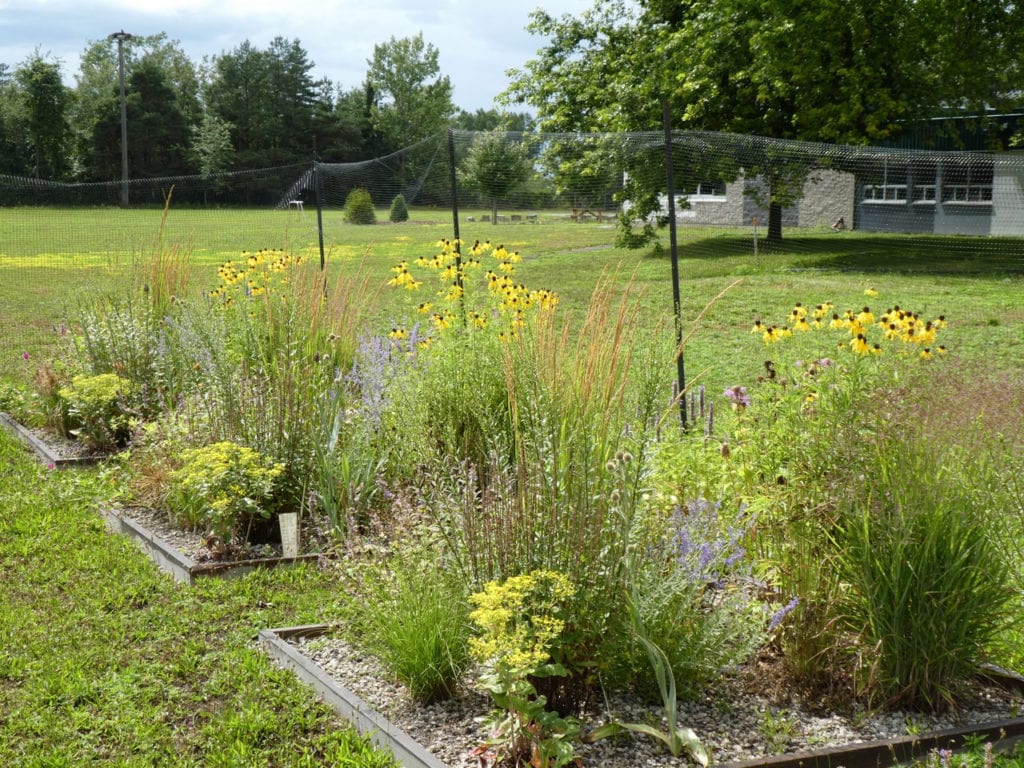 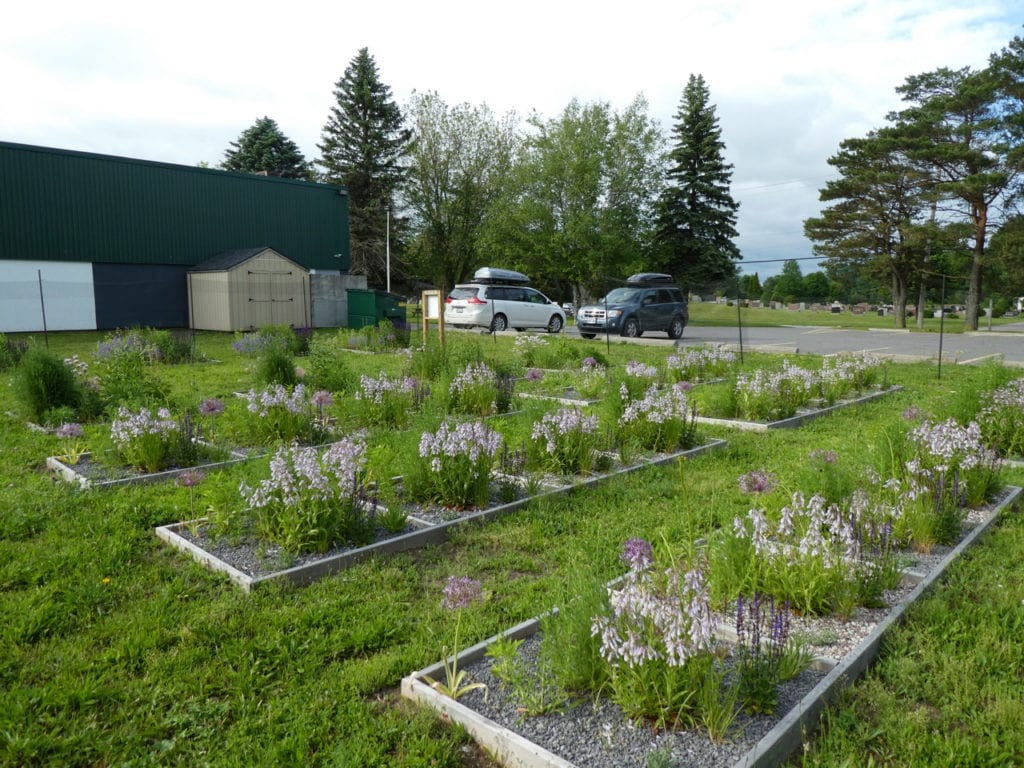 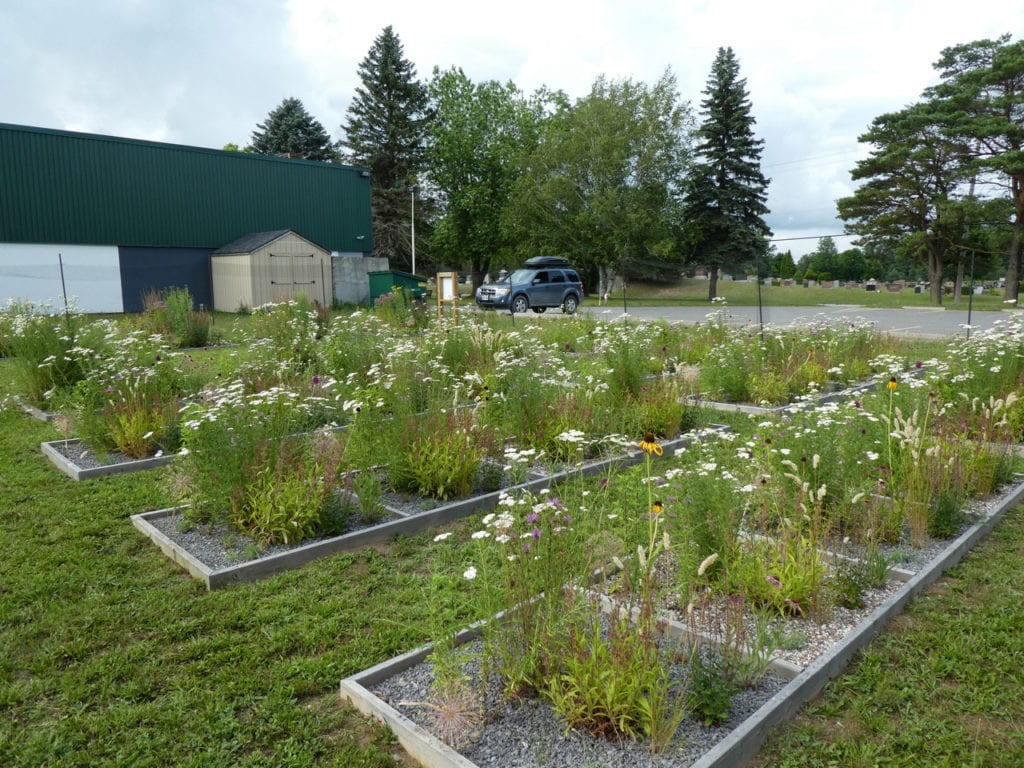 The second-phase beds on July 22, 2019. Achillea millefolium, Echinacea paradoxa, and Monarda fistulosa ‘Claire Grace’ are flowering along with the grass Melica ciliata.

The second phase was built and planted in September and watered three times during the fall. A further range of plants (including bulbs) and substrates were trialed, with an interest in finding ones that could both foster plant growth and resist weed invasion. The most important data from the second phase was determining how plants overwintered in the aggregate after fall planting.

Setting Up a Pilot Project

Another grant opportunity presented itself that same fall, which allowed me to road-test these ideas in a public location in nearby Picton. The landlord of a local office building was willing to let me replace the nondescript strips of turf between the building and the sidewalks with a pair of gravel gardens. The areas were excavated either 4” or 10” deep, and a 3:1 mixture of high-performance bedding gravel (essentially limestone screenings without the dust and fines) and green waste compost was brought in and top-dressed with granite pea gravel. 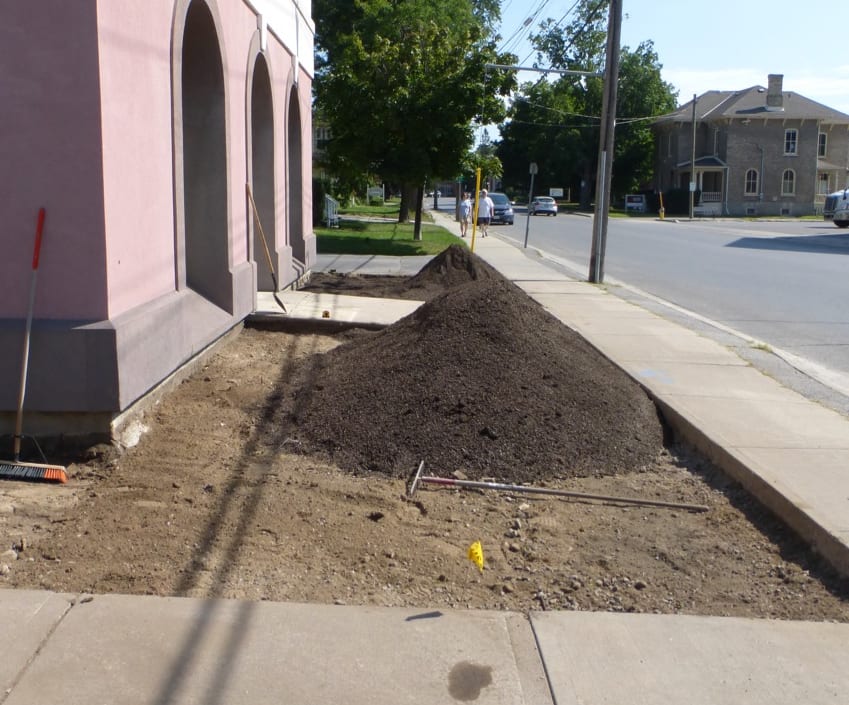 Front garden areas were excavated to a depth of 10” (pictured) and other areas excavated to a depth 5”. The substrate mixture is a 4:1 combination of limestone high-performance bedding gravel and locally sourced green waste compost. The subsoil below ranged from decent sandy soil to rocky construction fill. 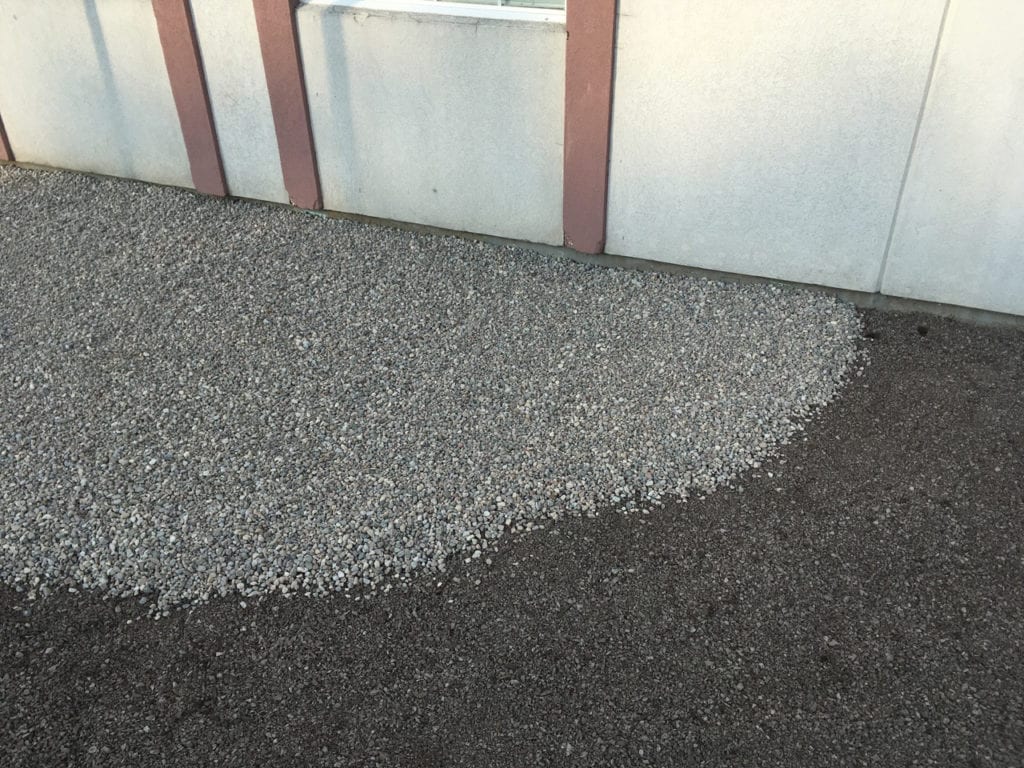 The substrate mixture was then top-dressed with a 1-2” layer of 3/8” granite pea gravel.

The gardens were planted in early September on a spectacularly hot and humid day which, combined with the heat island effect of a site surrounded by concrete and asphalt paving, made the conditions nearly unbearable. Thankfully I have a patient and helpful girlfriend, who helped me plant and water the gardens, and for which I’m eternally grateful. The gardens were watered three times that fall, and bulbs were planted in October. In hindsight it was perhaps too early to test these ideas in practice, after less than a year of observation, and I spent most of the fall and winter wondering if I’d just expended a huge amount of time and labour on a large and highly visible experiment that was doomed to fail. It wasn’t always a comfortable experience.

Winter and early spring of 2019 hinted at the extremes in weather and precipitation that would characterize what was a strange growing season. January 22 and 23 saw the temperature change from a low of -28°C (-18°F) to a high of 5°C (41°F). The trend continued through February and March. These wild fluctuations in temperature, and the mixtures of snow, freezing rain and rain, certainly put the tolerances of the plants in each garden to the test.

To my huge relief though, the strange winter and wet spring didn’t adversely impact anything in either the trials or the pilot garden. I don’t think I’ve ever been more thrilled to see emerging rosettes and tussocks of green leaves in the spring. The spring bulbs were a great success everywhere. In Picton, where the urban heat island effect is more pronounced, dwarf reticulate Irises were in full bloom by April 6. The same variety in another garden I’d planted, in soil, just a few steps away didn’t bloom until the 18th. Most interesting, given Picton’s particularly tenacious black squirrel population, was the fact that all the tulips went untouched in the deep gravel substrate. Aside from bulbs, the Pulsatilla vulgaris were wonderful in early May, while the Geum triflorum at the trial garden looked happier in crushed concrete than I’d ever seen it in soil. 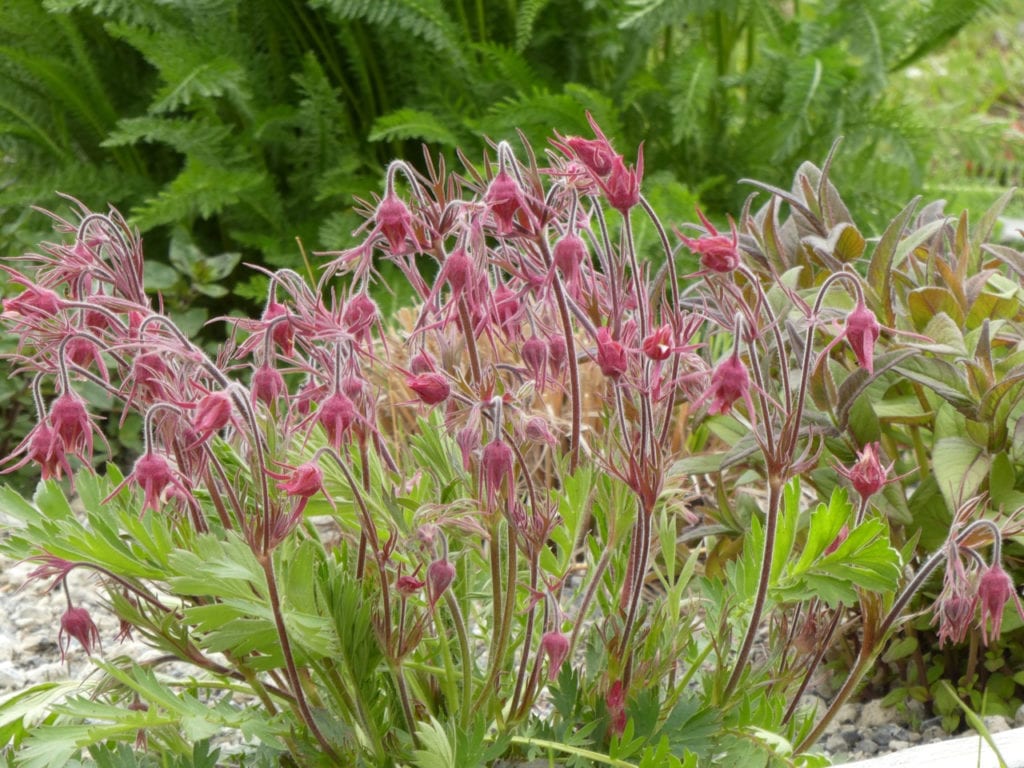 Geum triflorum shown at the trial garden is popular with bumble bees as early season forage.

In contrast to the spring, the summer saw rainfall totals well below average. Total average rainfall for June, July, August, and September combined is 309.6mm (12.19”). In 2019 this total was 206.2mm (8.12”), with July only seeing 33.2mm (1.31”) of rain. Despite this, and despite the fact that by June the abnormally British spring weather was a distant memory, neither of the two gardens required any supplemental irrigation in 2019. 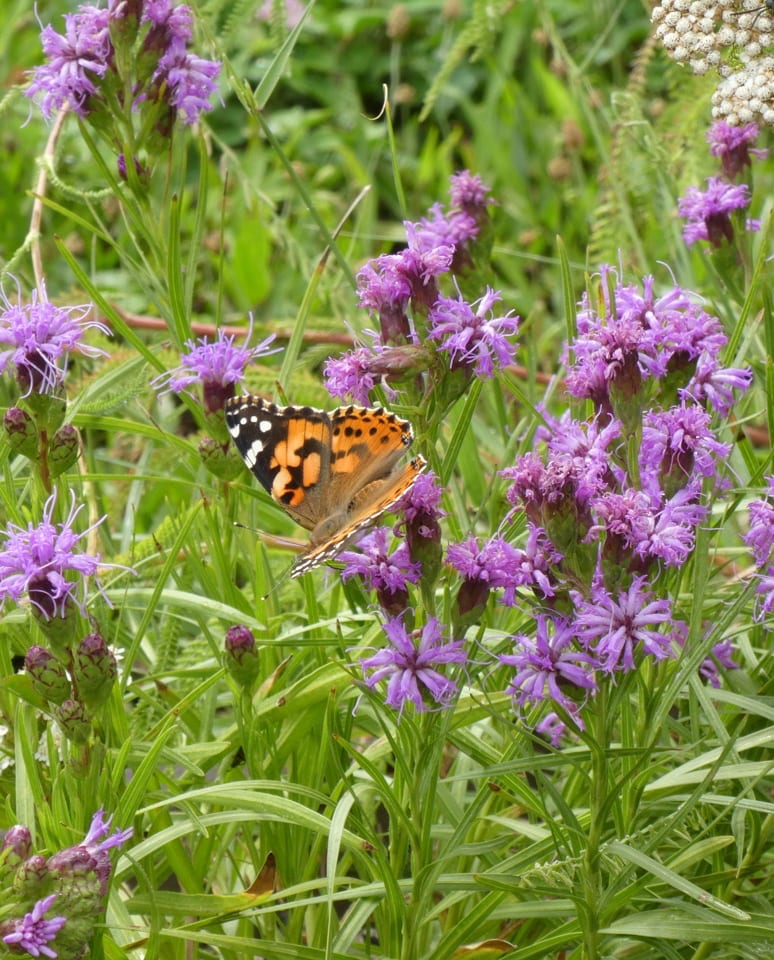 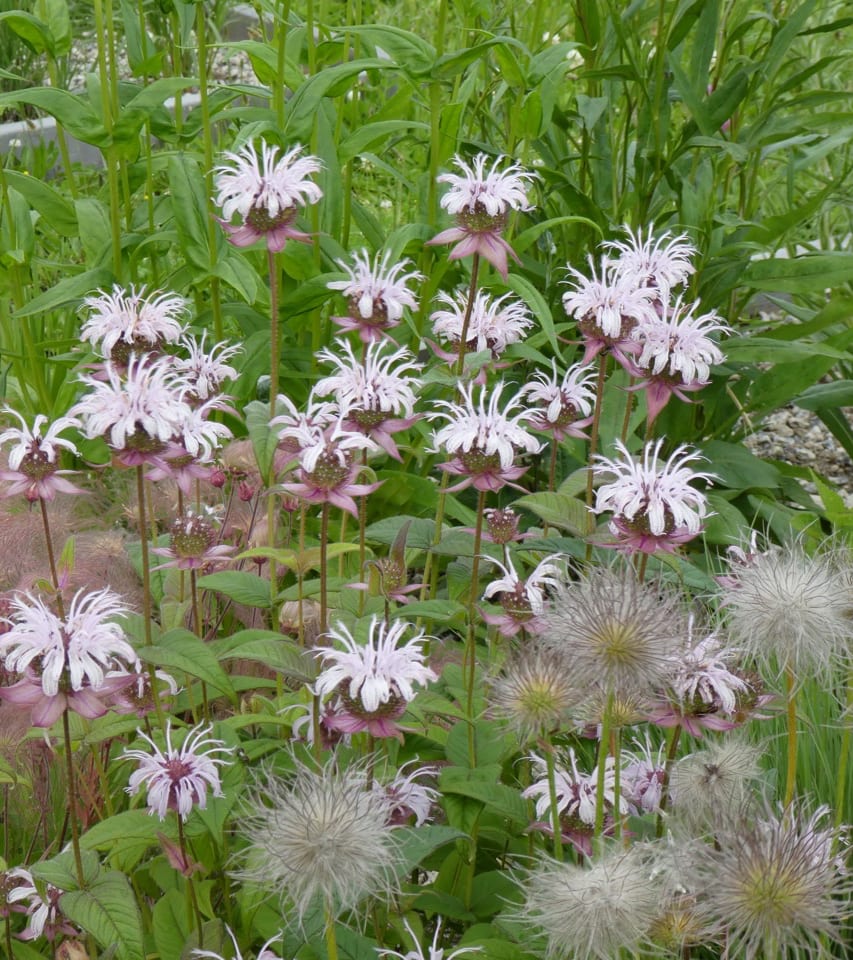 At the pilot garden in town the results were astounding. Plants grew so vigorously (especially the various Asters), they probably could have been pinched to stay more compact. On my frequent visits the only plants that seemed to suffer from the heat were the Deutzia ‘Yuki Cherry Blossom’ shrubs, which were probably a reach to begin with. The summer standouts were Monarda fistulosa ‘Claire Grace’, Callirhoe involucrata (which still has a few sporadic open flowers as of writing), Penstemon hirsutus and P. digitalis ‘Husker Red’, Geranium sanguineum, and Echinacea purpurea ‘Prairie Splendor’. The fall has seen an Aster explosion, with Symphyotrichum ‘Bridal Veil’, and S. lateriflorum ‘Lady in Black’ producing masses of small flowers humming with pollinators. Symphyotrichum oblongifolium ‘Raydon’s Favorite’ has been a revelation. Planted as a deep plug with only a few leaves last year, plants are now robust mounds, 2-3’ across, smothered in flowers. 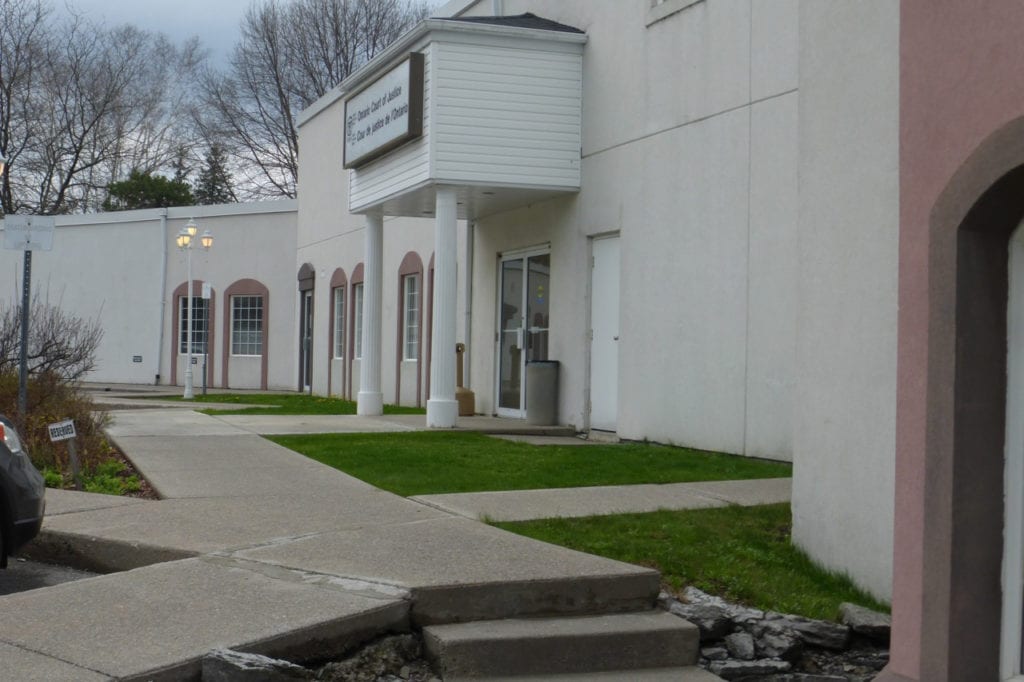 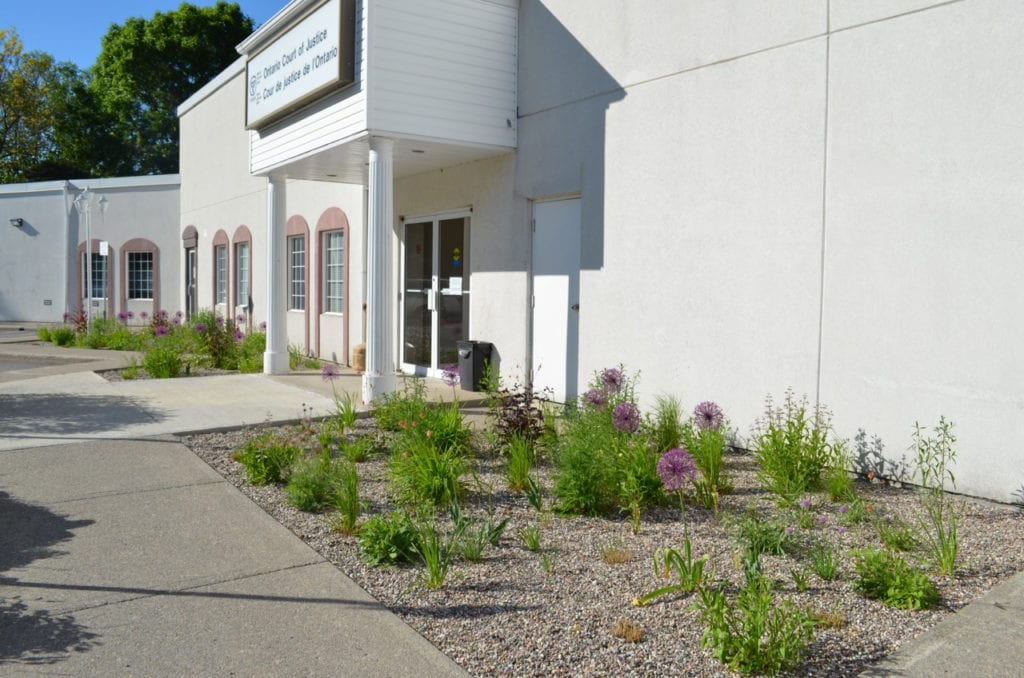 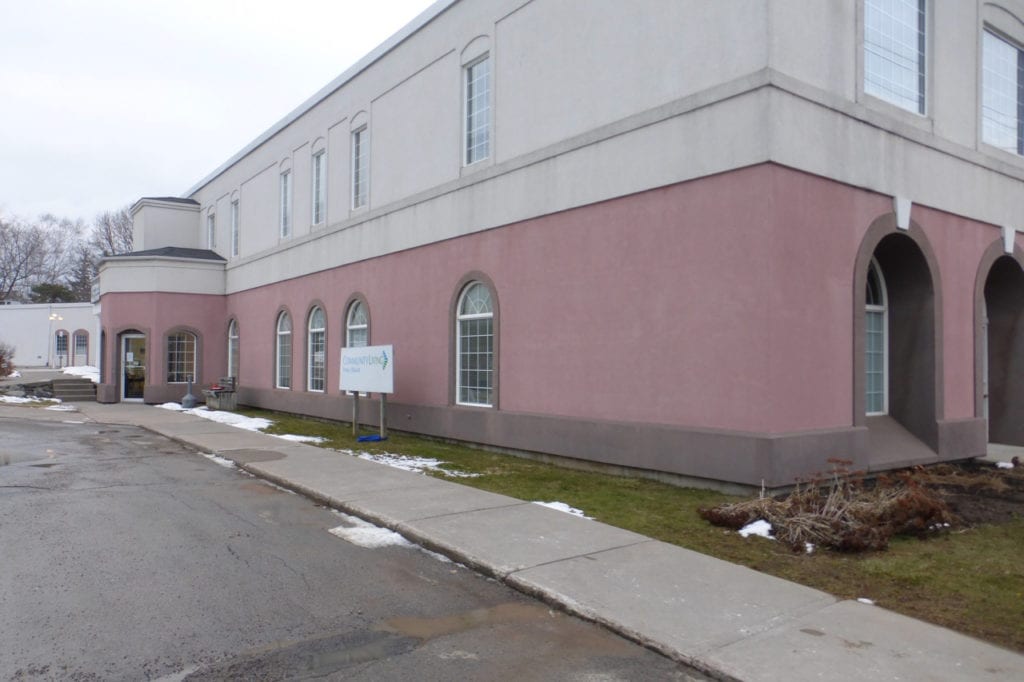 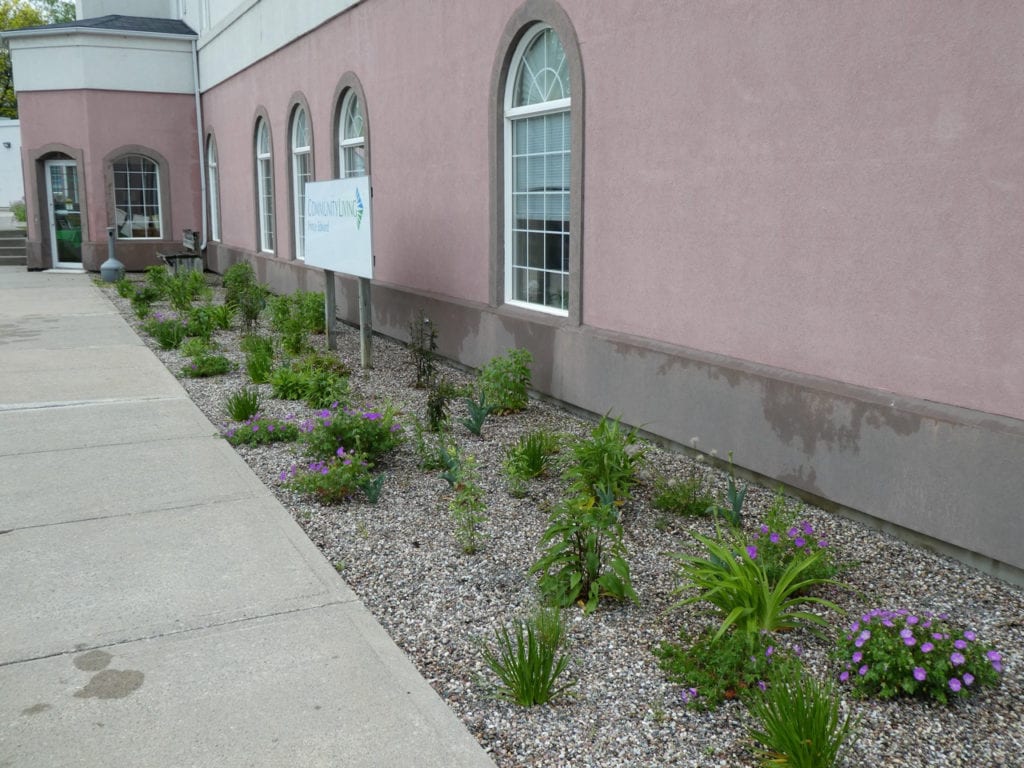 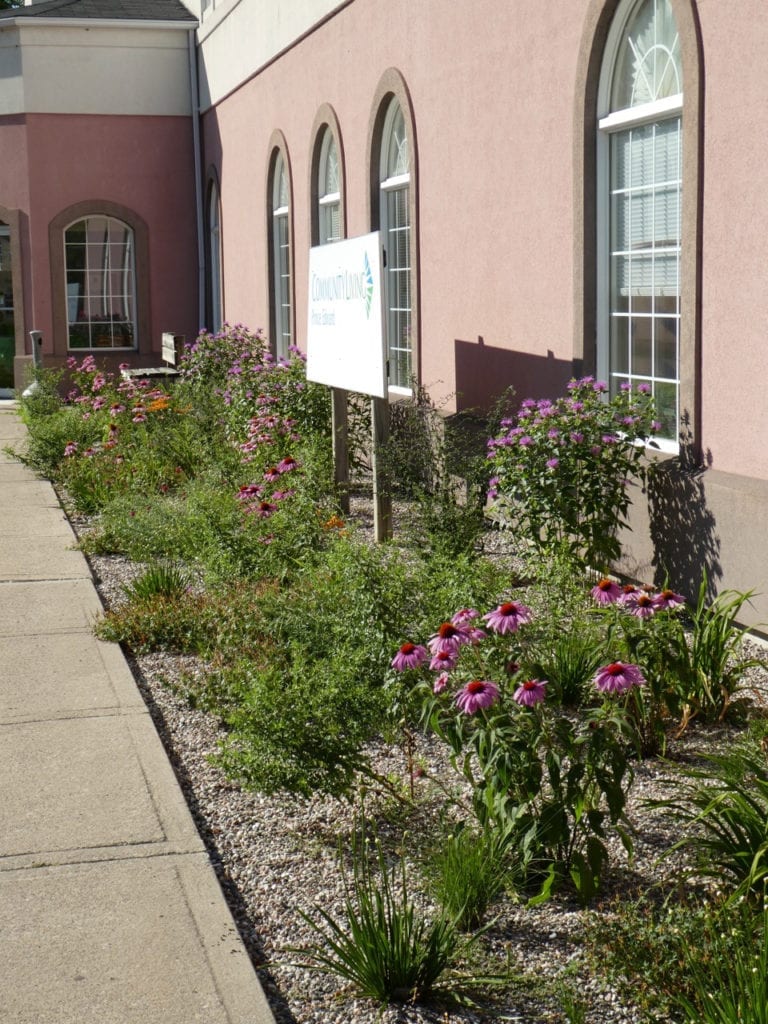 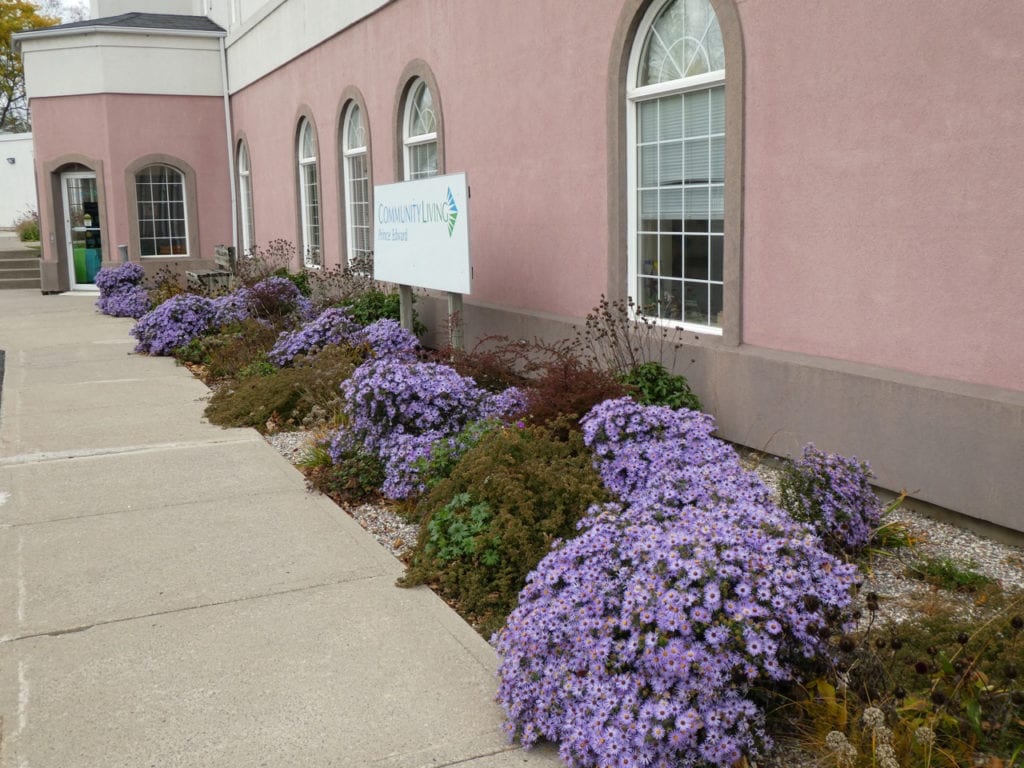 The pilot garden: after (October 29, 2019). Symphyotrichum oblongifolium ‘Raydon’s Favorite’ has been a huge success, planted as plugs in the fall and already forming substantial bushy mounds covered in flowers.

As for weeds, the trial garden was weeded once on May 26 and will be weeded once more this fall. The substrates that seem most vulnerable to invasion are those with compost present at the surface. The plots mulched with 6” of recycled concrete have remained weed-free for two full growing seasons, but the plant growth in these trials is also noticeably smaller than the other beds. The pilot garden was weeded twice, once on June 30 and again on September 7. All told, the total labor time was less than 4 hours for each garden over the entire 2019 growing season. 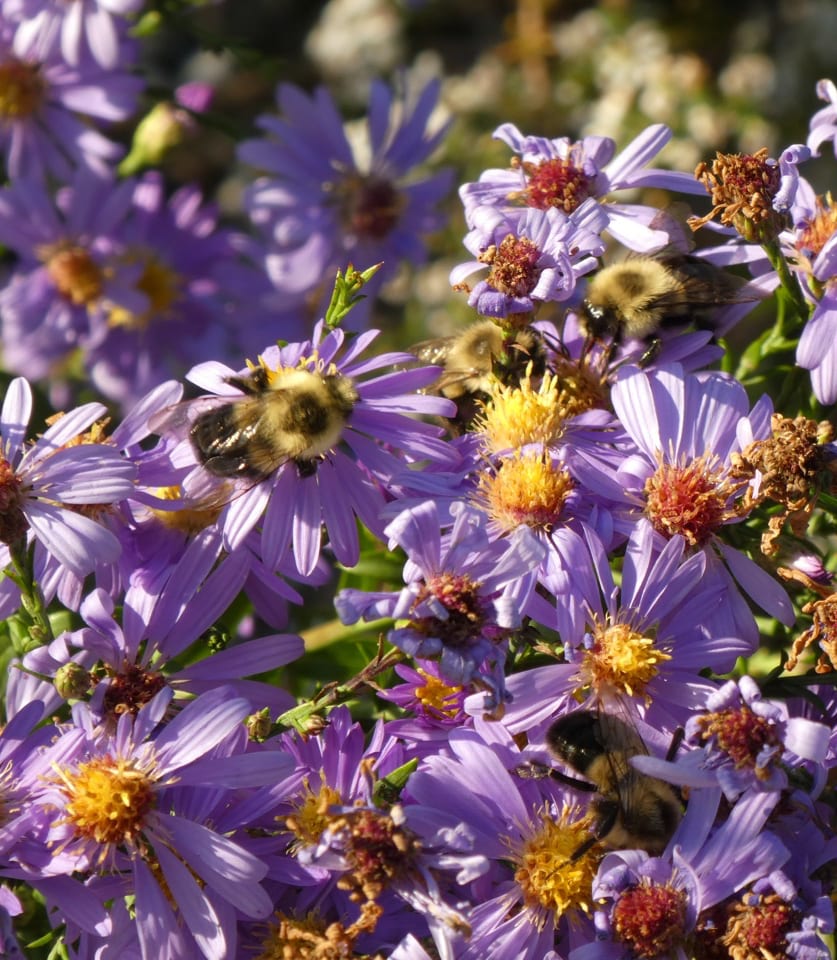 It’s easy for me to get bogged down in the observations and documentation of these two gardens, zooming in to notice every weed and wilted leaf. It can be hard to take a step back and see the big picture, but one moment at the pilot garden in Picton helped me do that. I was there in the late afternoon planting a variety of new bulbs to test when an elderly lady approached. She told me excitedly how she had been walking by earlier that week when she noticed the ‘Raydon’s Favorite’ Asters so covered in butterflies “it looked as if the plants were moving.” It was obviously something that had captured her imagination and lingered in her memory. It was an experience, a moment of enchantment, that mown turf or monoculture shrub planting can never replicate. Our public realm can and should generate these moments for people. It’s what I want to do more than anything, and it’s why I’ve become a gravel gardener.

Ben O’Brien is an ecological landscape designer, researcher, and consultant based in Prince Edward County, Ontario. Through his design business, Wild by Design, he creates richly planted residential gardens inspired by the local agrarian landscape. His consulting and research work focus on the design and management of beautiful, biodiverse, and resilient plant communities for public spaces. www.wildbydesign.ca; www.instagram.com/wild.by.design; www.facebook.com/wildbydesignpec

Behold the Magic of Warm-Season Grasses
Become Our 500th Member