By i.am.georgia.harris on October 14, 2021 in Uncategorized

This article originally appeared in Xerces Blog July issue and is reprinted with the Xerces Society permission and the authors.

As someone who spends a lot of her time trying to convince others that insects are incredible animals worth saving (just think of the biodiversity! Their intrinsic value! The ecosystem services!), it can still be surprisingly easy for me to forget that not everyone is on the same wavelength when it comes to most endearing species. Some of this is expected. I don’t have the easiest time convincing people that caddisflies are lovable, or that giant earthworms are some of the coolest annelids around. But butterflies and bumble bees? Sure. Fireflies? Definitely. Moths? I thought so, but maybe not.

During a recent conversation with some friends, I was shocked to hear so much moth disgust. The very word “moth” conjured up images of holey clothing, infested cupboards, and sad powdery wings knocking at the door at night. “They eat my quilts” said one friend. “They’re so dull” said another. A very unofficial poll on social media confirmed that many other people felt the same way. How was this possible? 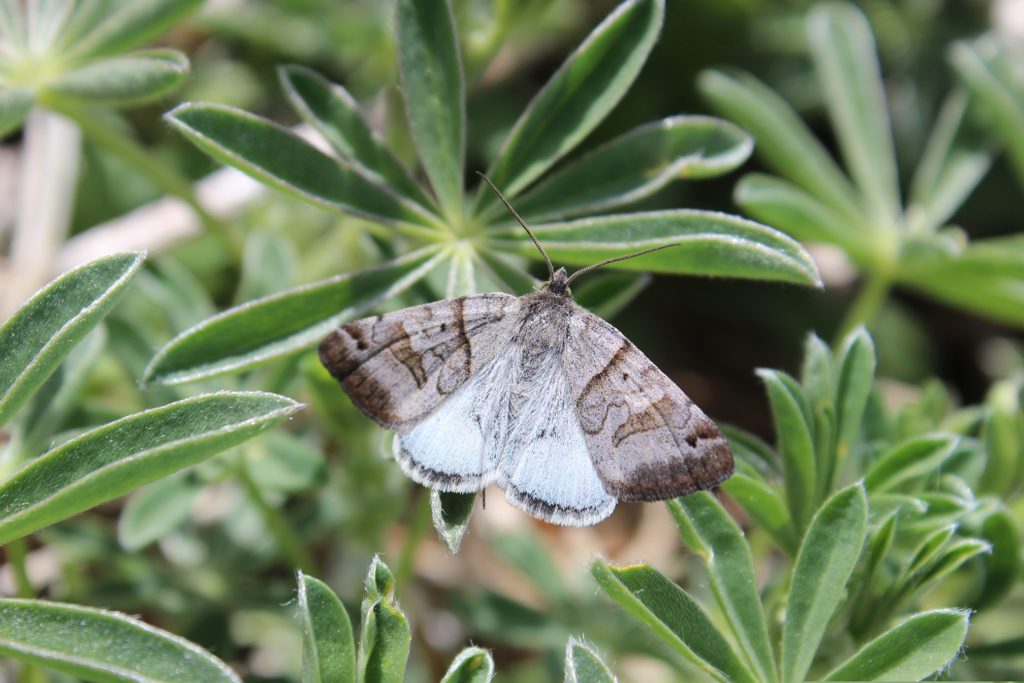 Moths get a bad reputation as pest insects or being overly drab, which couldn’t be further from the truth. Only a small percentage of moths are considered harmful by human standards, and even the dullest moth from afar is actually quite beautiful when you get up close. (Photo: Lara Drizd, USFWS)

Perhaps you too are in the same camp as my friends. If so, I hope to change your mind as I’ve slowly started to change some of theirs. And what better time than during National Moth Week?

Before I start waxing poetic on moths, let’s dive into some basics. Moths are closely related to butterflies and are members of the same order, Lepidoptera. Like butterflies, moths undergo complete metamorphosis, hatching from an egg into a caterpillar that spends most of its time eating. From there, it will pupate, completely rearranging its form before emerging as a winged adult. The caterpillar stage is the longest part of a moth’s life, typically spanning several hungry weeks when all it does is eat, while adult moths may live only a few days, primarily focused on mating and potentially not eating at all. In fact, adults of many species (such as those of the wild silkmoths) don’t even have mouthparts. Others, though, frequently visit flowers to sip nectar and consequently, are important pollinators.

Moths are an incredibly diverse group of insects. North America is home to more than 12,000 species—an astonishing number compared to our relatively paltry 800 or so species of butterflies! There’s a common misconception that moths are only active at night, but many species are actually diurnal, fluttering around at the same times as butterflies. Some of these day-active species are so large and colorful that they’re often confused for butterflies. 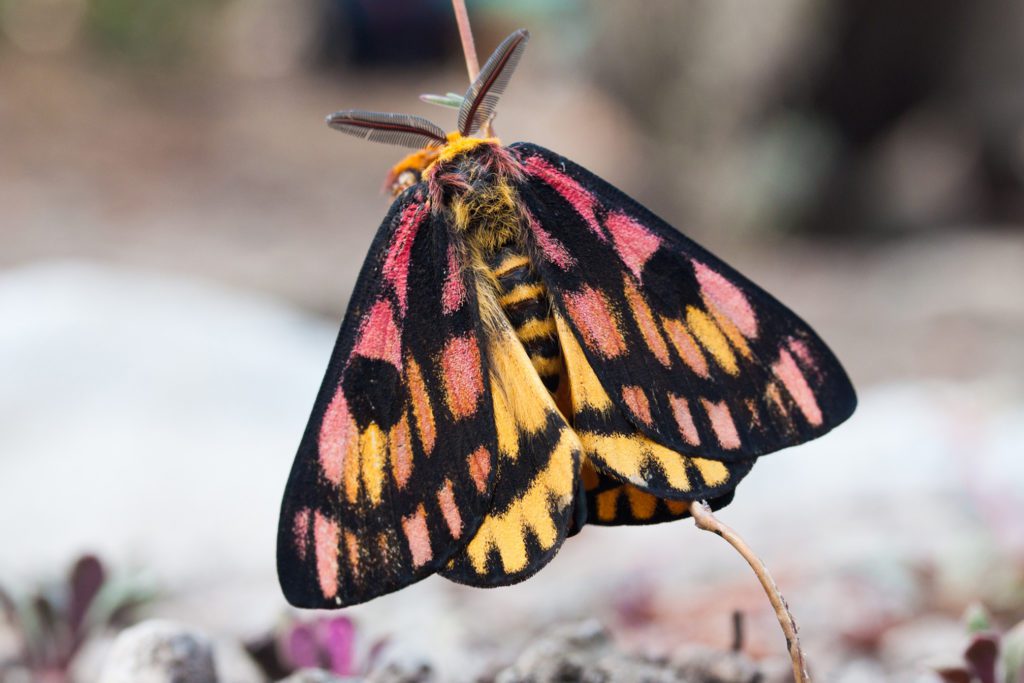 The elegant sheep moth (Hemileuca eglanterina) is so large and eye-catching that it’s often mistaken for a butterfly. These moths can be locally abundant in the Pacific Northwest. (Photo: Ken Ichi-Ueda, Flickr [CC BY-NC 2.0])

These brilliant colors aside, moths are no strangers to deception and disguise. Many of the species that get a bad rap as boring or drab are actually incognito—they look the way they do to blend in with bark, rocks, and twigs in their surroundings. Others have evolved long tails or eye spots to confuse or startle would-be predators. Some species even mimic bat sonar, creating ultrasonic clicks with their bodies that may help throw a hungry bat off course. There are entire groups of moths that mimic other animals, like hummingbirds and wasps. And this isn’t limited to the adults; moth caterpillars pull some pretty spectacular and confusing stunts themselves. 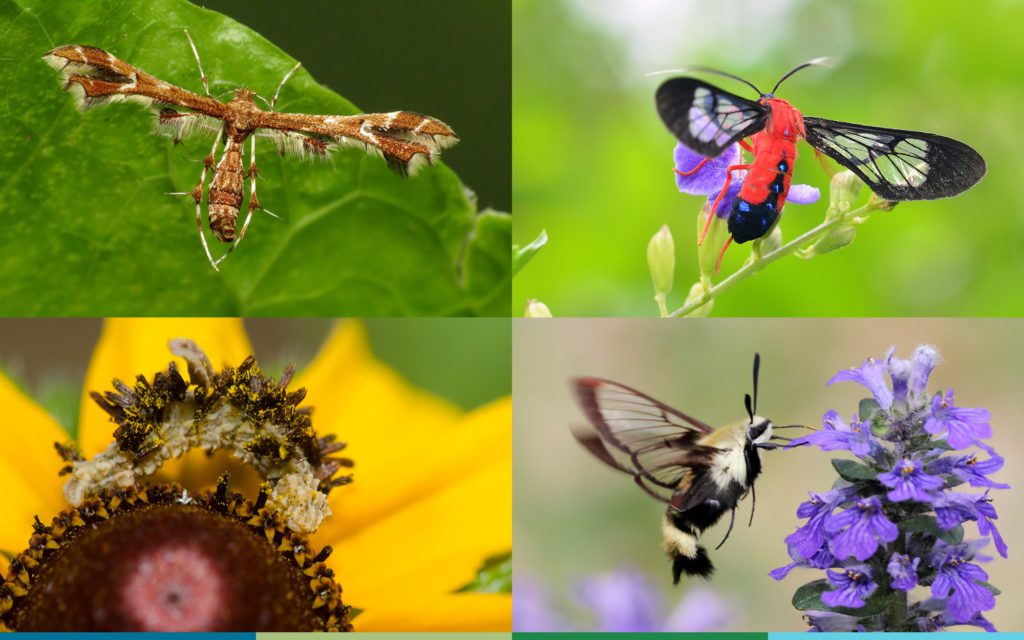 Moths have had millennia to evolve clever ways to deter predators, from camouflage to mimicry. Clockwise, from top left: A plume moth in Washington, D.C.; the scarlet-bodied wasp moth (Cosmosoma myrodora) is a wasp mimic found throughout Florida and nearby coastal regions of the southeastern U.S.; snowberry clearwing moths (Hemaris diffinis) are so large they are often mistaken for hummingbirds; this caterpillar has camouflaged itself with flower bits. (Photos, clockwise from top left: Katja Schulz, Flickr [CC BY 2.0]; TexasEagle, Flickr [CC BY-NC 2.0]; Pamala Wilson, Flickr [CC BY-NC-ND 2.0]; © Bryan E. Reynolds.)

Moths play a vital role in food webs and are an important food item for songbirds, mammals, and other insects. Moths also are important pollinators, particularly those that are active after dark, when many other pollinating animals have settled down for the night. One study found that nocturnal moths visit more plant species than day active bees do (quite a feat considering the superpollinator status of bees), highlighting their importance in pollen transport. Moths have wide ranging tastes in flowers. While some species are generalists, others have evolved to rely on a single plant species or group of species.

One of the more extreme examples of this is the obligate relationship of yucca moths and Joshua trees—each species of Joshua tree needs a particular yucca moth partner to pollinate it; the moth, in turn, relies on its Joshua tree host plant to provide food and shelter for the next generation of moths. This relationship is even more special when you consider that yucca moths seem to intentionally pollinate their host plants. Females will take pollen they have collected and peck, tap, or push it into the stigma of another flower, thus ensuring that the flower will mature and produce seeds for their young to eventually eat. This relationship is so specific that Joshua trees don’t even offer a nectar reward, an evolutionary strategy commonly used by other plants to entice would-be pollinators. 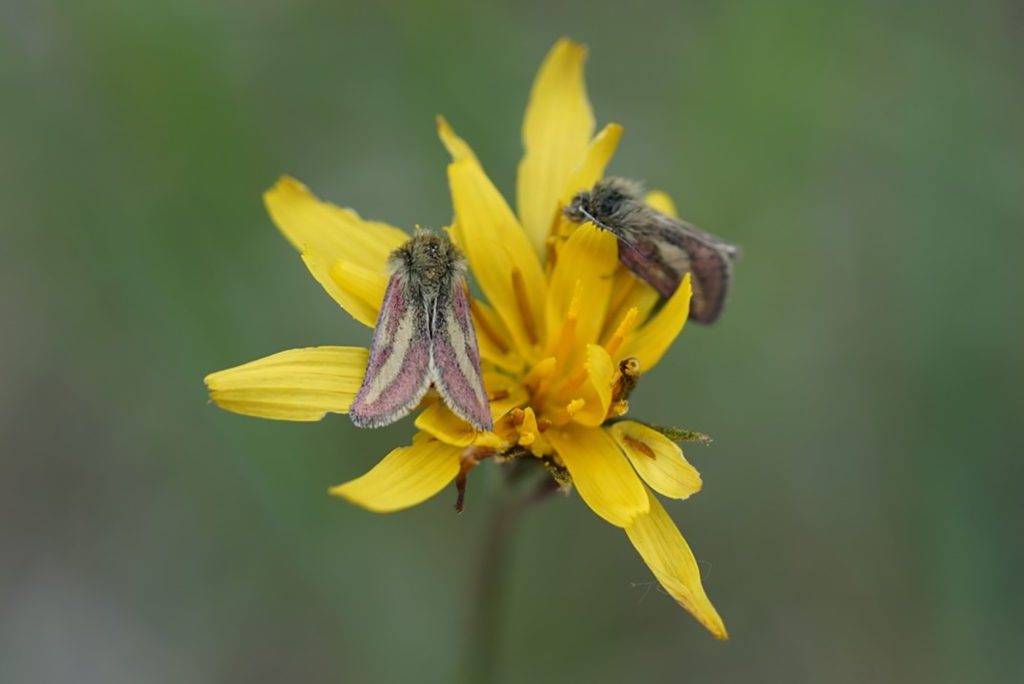 These small owlet moths, Heliolonche modicella, seen on an Agoseris flower in Oregon’s Blue Mountains, are just one of the thousands of species that visit and pollinate plants. (Photo: Candace Fallon)

Gardening for Butterflies: How You Can Attract and Protect Beautiful, Beneficial Insects (Timber Press, 2016). Although this Xerces book focuses on butterflies, there’s an entire chapter dedicated to moth gardening and the plant listings include notes about which moths they host.

Candace Fallon is a Senior Endangered Species Conservation Biologist, Public Lands Lead and Firefly Lead.  As the Public Lands Lead, Candace manages federal contracts focusing on the conservation and management of at-risk invertebrate species in the West. She also manages Xerces’ firefly conservation program. Originally hired as a monarch conservation specialist, Candace now works with a diverse range of taxa, including butterflies, beetles, aquatic macroinvertebrates, and freshwater and terrestrial mollusks. She has extensive experience with inventory and monitoring of rare, declining, and sensitive invertebrate species; providing technical guidance to land managers; developing and managing community science projects; and conducting outreach. She is a coauthor of Gardening for Butterflies: How You Can Attract and Protect Beautiful, Beneficial Insects.