By Maureen Sundberg on October 15, 2015 in Book and DVD Reviews, Weeds and Weeding 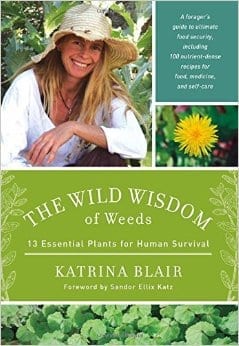 The Wild Wisdom of Weeds is a deeply personal account of both Katrina Blair’s longtime relationship with and fondness for these and other plants in her hometown of Durango and the surrounding mountainous landscape of southwestern Colorado and her interactions with and lessons learned about them elsewhere in her travels. I found much to like in this provocative book, a spirited defense of weeds: thirteen species and their relatives in particular. Although I have been picking and eating most of these thirteen species for over four decades, I still learned quite a lot of new things about these plants from Katrina’s book. Its numerous color photos added to the book’s utility and visual appeal.

Blair’s ambitious goal is to transform societal and individual attitudes about weeds from hate to love, or at least tolerance. The book is filled with interesting personal details about experiences that helped to shape the author’s relationship with and affection for wild plants, and includes numerous recipes for edible and medicinal uses for each plant. That said, Blair’s statements tend to be a bit broad, simplistic, sometimes misleading and occasionally outright inaccurate when taken in the context of the global audience she is trying to reach. The misapplication of this information could result in harm to wild plants and/or to people relying upon them for food. I offer a longer critique and with more detail, but address concerns raised by the book’s chapter on Knotweed  below.

Blair shares some interesting personal details about her childhood and how various outdoor experiences, with her parents and on her own, helped to shape, inform, and nurture her relationship with and affection for wild plants. Of particular note, Blair recounts the successful initiative to save sixty acres of wetland near her home and the formation of Turtle Lake Refuge that was subsequently established on the property.

Even those not inclined to gather and eat weeds themselves may nevertheless enjoy Blair’s stirring retelling of her successful political campaign to get her home town of Durango, CO to manage city open space land organically and give up the fight to control dandelions and other weeds with herbicides. Blair claims that her feeding dandelions and other weeds to the townspeople helped to soften their negative attitudes towards the plants. Anyone engaged in or contemplating similar initiatives to reduce unnecessary herbicide use may be inspired by her example.

Much of the book, over 200 pages, consists of chapters on each of the thirteen species of weeds Katrina selected for inclusion in her book. I will highlight just two.

The book’s chapter on Dandelion epitomizes the core message of Blair’s book: instead of despising weeds, we (collectively, as well as individually) would be a lot better off if we recognized the gifts they offer in terms of nourishing and healing our landscapes and ourselves. She then describes how dandelions can serve as the catalyst for effecting this change: “As a way to promote weed appreciation within our community [Durango, CO] in early May, Turtle Lake Refuge hosts a fun celebration called the Dandelion Festival.” For this annual fête, preparers and participants incorporate dandelions into various savory dishes, ice cream, and “Dandelion Saison” beer and enjoy tunes played on flutes made from the hollow flower stems of the taller dandelion plants.

Blair goes on to note that hers is just one of over a dozen similar dandelion-focused festivals the world over. “The numerous annual festivals celebrate and highlight the dandelion by creating all varieties of foods and beverages made from the whole plants. A common theme that runs throughout most of these events worldwide is the support of organic land stewardship practices and the desire to change the toxic herbicide spraying in parks and wildland maintenance programs.” While, admittedly, this message might be a tough sell in some locales, where the pursuit of the weed-free, “perfect” lawn remains well-entrenched, dandelion festivals nevertheless offer a playful and ingenious means for subverting that dominant paradigm.

Again, while there is much valuable and accurate information in Blair’s book, there is also much in it that could confuse or mislead readers and could potentially cause harm to wild plants and/or the people eating them. The chapter on Knotweed provides an illustrative example. One potential source of confusion regarding this chapter is the title itself. While in my region (Northeastern U.S.), and I suspect elsewhere, the word “knotweed” is common shorthand for Japanese knotweed (Fallopia japonica, formerly Polygonum cuspidatum, a highly edible plant in its own right), the main focus of this chapter is on an entirely different species: prostrate knotweed (Polygonum aviculare).

Two sections of the Knotweed chapter raise particular concerns on my part. On page 205, Blair states, “[Prostrate] Knotweed can grow in very inhospitable soils, including those that have been contaminated by petroleum products and mine tailings. It can grow in soils high in salts and metal contamination.” While I can understand Blair’s admiring the toughness and tenacity of a species that can grow in such challenging conditions, I would have cautioned readers about the potential health risks of eating plants growing in contaminated soil. Sometimes plants growing in contaminated areas will take in, if not hyperaccumulate, heavy metals and other toxins, making the plants potentially harmful to eat. As this chapter offers no assurance that P. aviculare does not take up contaminants in the soil, I personally would stick to gathering it from clean areas only.

My other concern arises from a story in which Blair shares a “huge lesson” she learned from Alpine Bistort (Polygonum viviparum), a native, non-weedy cousin of prostrate knotweed. The story recounts how, in 2008, while on a solo “walkabout” through the mountains (something she has done each year for over two decades), equipped with apples and avocados for sustenance, she discovered, around the margins of an alpine lake, “a huge patch of Alpine Bistort. The plants were all in seed, perfectly ready to drop and fall into my hands.… I ate them raw right off the plant by pulling the seeds free with my teeth.… It was the high alpine knotweed that taught me there is so much nutrition in the wild woods to nourish my journeys, and from then on I took a leap mentally and realized I did not need to bring any additional food on my walkabouts.”

My first problem with this story is Blair’s failure to acknowledge that while Alpine Bistort might be common enough in the mountains of southwest Colorado for her or anyone so inclined to pick its seeds without harming it — or the alpine animals depending on it for food (marmots, for example) — this native species is decidedly less common elsewhere. In fact, P. viviparum is on the threatened or endangered species list for at least two New England states (NH and ME) and is categorized as “extirpated” (no longer present) in VT and non-existent in CT, MA, and RI. Obviously, no part of this plant should be gathered from the wild in regions where this plant has protected status, or is otherwise not abundant.

Secondly, I am concerned that readers of the book will be inspired by Blair’s “nature will provide” lesson and emulate her example, heading off for extended trips into the “wild woods” without taking any food with them and counting on wild food alone to fill their bellies. While some may indeed be fortunate to encounter patches of blueberries, blackberries, or other abundant wild plants to feast upon, others not so lucky may find themselves without enough to eat. Hunger is a powerful motivating factor and could very well induce a person to harvest more from a patch of plants than would be ecologically responsible. And what if the weather gets ugly, or you twist an ankle (or worse) and can’t get to the wild food, even if there is enough to stave off starvation?

In contrast, I offer this advice to people contemplating an excursion into the backcountry: “Take plenty of food with you!” This enables you to forage in a carefree and joyful way, instead of what otherwise could end up as a grim, hunger-driven chore. Then, any wild food you encounter on your hike can be (should you choose) a wonderful compliment, or even substitute, for the food you have brought. On the other hand, if the weather turns crummy and you’d rather stay holed up in a tent, reading a book, you can, because you brought plenty of food with you. In a “best case” scenario, you may have found and eaten so much wild food on your “walkabout” that you have to pack out much, if not most, of the food you packed in, but that would still be well worth the peace of mind having brought it gave you.

The Closing Thoughts section of Blair’s book begins with the sentence, “When we reconnect with the land, exactly as it is today, we find there is so much value and available abundance around us.” I myself largely share this “Zen” approach to the outdoors: appreciating (and happily nibbling on) whatever edible wild plants I encounter, native or non-native, weedy or invasive, without passing judgment on whether or not each species’ presence is deemed to be worthy or an unworthy component in the landscape. She notes, “Intimately knowing these wild plants and their benefits helps us to reawaken our wild instincts to live in greater harmony with all other species on the planet.” Blair goes on to say that just as weeds are well-equipped to cope with change, like climate change, so are we. We can acquire resiliency from the weeds: familiarizing ourselves about them and eating them helps us “learn their wisdom.” A philosophy that might be bit “far out” for some folks, but perhaps not for you. At the very least though, readers of The Wild Wisdom of Weeds should come away with a deeper understanding, if not appreciation, of these tenacious plants.

Note: You can read a longer critique of Wild Wisdom of Weeds by clicking here.

Until his retirement in June of 2015, Russ Cohen’s “day job” was serving as the Rivers Advocate for the Massachusetts Department of Fish and Game’s Division of Ecological Restoration. However, his passionate avocation for over four decades has been connecting to nature by nibbling on it. Russ is an expert forager and the author of the book Wild Plants I Have Known…and Eaten (Essex County Greenbelt Association, 2004). He has been teaching foraging since 1974 and gives over three dozen foraging walks and talks each year throughout the Northeast. No longer encumbered by his desk job, Russ has stepped up his effort to partner with land trusts, municipalities, state and federal agencies, and other landowners and land managers to enhance plant diversity on suitable sites, particularly by adding native edible species. This fall, he is collecting the seeds and nuts of native edible species (like Shagbark Hickory, Carya ovata) and passing them along to propagators and others for growing out and planting in suitable locations. Russ can be reached at eatwild@rcn.com; to learn more about his foraging programs go to his website.

A Critique: The Wild Wisdom of Weeds
Book Review: Pollinators of Native Plants